Day 10 started with a simple "clean up the wiring" - and quickly went downhill. Something wasn't right; I was seeing odd results from the adder. Inconsistently. Often while running off of the main clock. Not very often when running by hand.

So I went debugging.

The obvious culprit would be power drop around the board. Quickly, then: drag out the multimeter! Voltage near the point where it connects to the board? 4.9 volts. What about over at the adder? 3.2 volts.

Yeah, I'd say that's the problem.

These solderless breadboards have pretty significant internal resistance. Which means the power connections that are jumping board-to-board-to-board are a problem.

Next up is some very boring wiring for the remainder of the ALU (and you thought all the wiring I just did was boring? Hah!) - invert, AND, OR, XOR, and compare.

The B register inverter is already part of the adder (for "subtract twos compliment"), so that will probably be next; it just needs to be wired to the bus. Which needs to be physically longer to accommodate all of these modules: 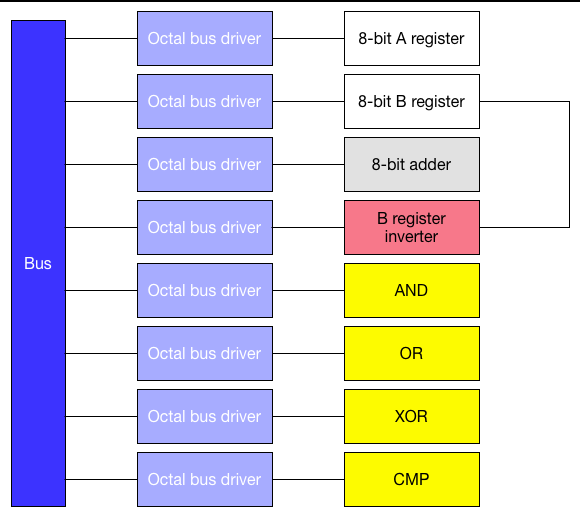 I've also been thinking a little about output. I might like to hook up some 7-segment displays. I have a mess of fairly boring 7-segment drivers that just decode the numbers 0 through 9; I'd prefer hex, though. So maybe the Intersil 7218, a fancy 7-segment driver? It has a hex mode, and I've got three of them. Well, one Intersil and two MAX 7218s. The Maxim version is slightly more fancy with an "update just one digit" mode that the Intersil didn't have. I probably won't take advantage of it; I probably won't even take advantage of the 7218's ability to drive 8 separate digits. Two digits is sufficient to display what's on the bus, which makes these officially overkill.

And yet, this also seems insufficient in terms of final display. I'm not sure what I want this computer to be able to do, but I suspect it will involve ... Pong. Which would mean some better form of display, maybe? Hmm. I have a bunch of shift registers, and some LED matrix modules...