The OR and XOR were simple and straightforward. AND was a little more complicated, because I only have one quad AND gate; I substituted a quad NAND gate for the other 4 bits and used 4 of the inputs of a 7404 inverter. Another part I'm quickly running out of. I'm starting to think I might have to cross-wire back to the unused inverters in the 7404s lying around the board eventually; each one of these ICs has 6 inverters, and here I am using just a few in each instance.

Anway: back to the ALU. With the logic gates done, I'm left with the comparator and bit shifters. The comparator is a simple matter of wiring it up per datasheets. A little tedious but not difficult.

For the bit shifters: my plan is to use two bus drivers like this...

But that got me thinking - two ICs to do pretty much the same thing? If I wanted to be clever, I could do this: 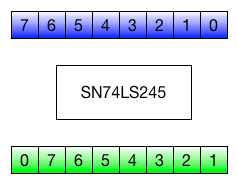 I never liked rotate instructions, though, and I'm definitely not in this to save on hardware. So I probably won't do that.

Going to have to debug that. I've got a '163 counter that I found while re-inventorying my supplies, so I might pull out the '193 and use it in the 8x8 LED matrix display instead.