A project log for Spider, a Tiny Home Automation Hub

Today, two spider devices communicated with each other for the first time, and it worked! In this setup, an AVR with IR sensor detects motion at the front door and signals this to an MQTT broker. A Spider device listens to the message and switches on a light inside the house using an RF socket switch. Schematically: 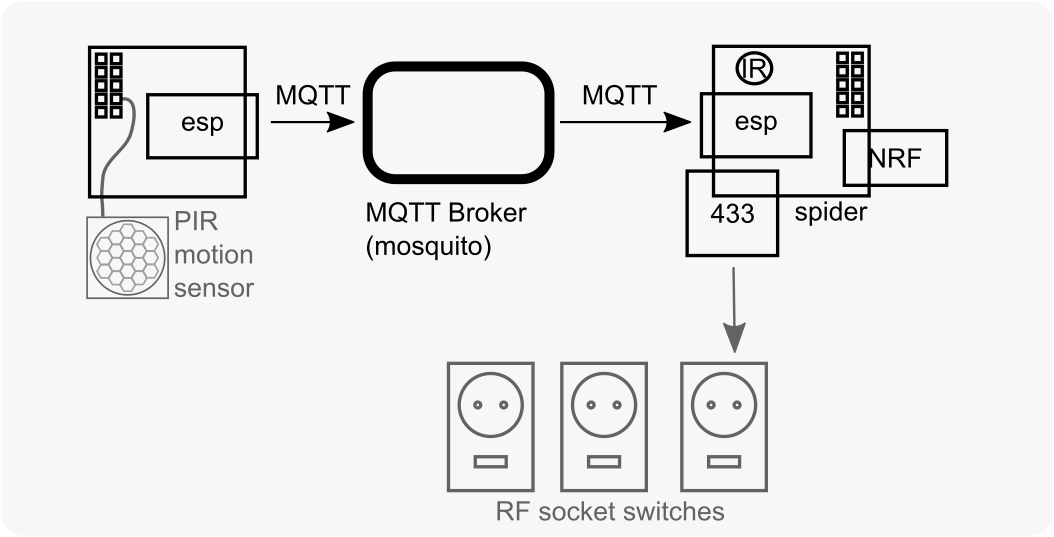 The following video shows the system in action.

Of course this is not a realistic setup, but it shows the concept and there's something very satisfying in seeing the system react in a fairly sophisticated way.

Being a software developer, I can't help but explain in some detail how the software for this project is now set up. To be honest, this example is somewhat hacked. To start with, the sensor board was programmed to directly publish to the MQTT topic of the light switches:

This code will publish a "0" to topic "spider/switch/0" and then wait for the PIR sensor to show movement. As soon as movement is detected, it will publish a "1" to that same topic and then wait until an (arbitrarily chosen) 30s period passes without movement, after which it will send a "0" again, etc.

This direct connection between sensor and switch is not supposed to happen. Really, the sensor should just publish to its own topic, e.g. "spider/sensor/<n>" and the home automation software should take over from there and publish to the switch topic.

The spider software for the switch had already been programmed before. As stated previously, it subscribes to the topic "spider/switch/+" and will react to messages by sending "on" and "off" pulse trains to the 433 Mhz transmitter. The setup looks like this:

This code registers the function update() as a callback for new messages. The update function itself checks whether the topic of the message is the one it expects and will then parse the switch number and the number in the message:More details about the implementation of sendcode() are in the source file and were described in the previous log.