Today, when a sea turtle nest is found on a Seashore beach, a small enclosure is built around the nest to keep pedestrians and vehicles away. About 50 to 55 days later the nest closure is expanded, often closing the beach to vehicular traffic. Because there is no reliable way to predict when tiny turtles will emerge from their nests near the duneline and parade to the surf, closures can sometimes last for more than a month. 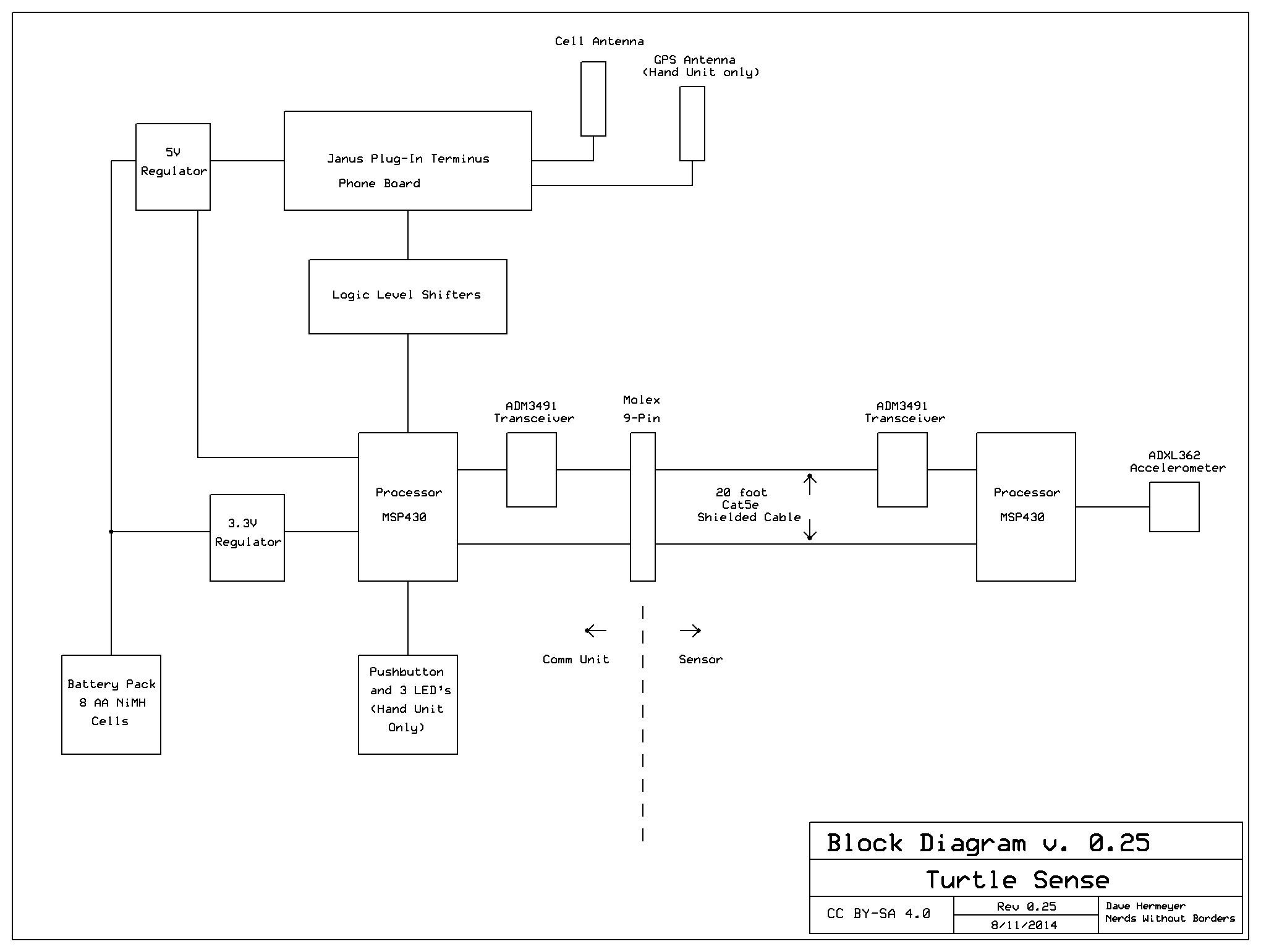 The Smart Sensor (the right half of the diagram above) uses an accelerometer to record changes in acceleration up to 400 times per second.  The readings are analyzed by the microprocessor to produce a profile summary of the forces acting on the sensor.  A new profile is created every 15 seconds to six minutes. Because it is not possible to transmit data from underneath wet salty sand, a set of summaries are uploaded to a separate Communications Unit (the left half of the diagram) at least once a day and as often as every hour.  The Comm Unit and the Smart Sensor are connect by Cat5e Shielded cable, which is typically about 20 feet (6 meters) long, but can be much, much longer if needed.  The Comm unit is controlled by another microprocessor which controls the communication with the Smart Sensor and also controls a plug-in cellular communications board.  Cellular communication uses the bulk of the power needed by the system, so its power supply is powered down when communication is not needed.  It is typically only powered up for a few minutes each day.  The entire device is powered by a battery pack of 8 rechargeable AA NiMH cells.  This is enough power to run the system for many, many months.

In order to keep track of multiple nesting sites, we also created a hand-held communications device that is used to test the sensors, check for good cell phone reception, and register the date and GPS location of the nesting sites.  Since this device is small and portable, it can be carried along with Smart Sensors on the daily beach patrols of park personnel.  When nests are found, they are excavated and the eggs are counted.  At that time, a Smart Sensor is placed on top of the nest, and it is connected to the hand-held device to register the nest.  Testing and registering the sensor just takes a few minutes.  Then the cable is buried, with its 9-pin Molex connector sealed in a plastic pill bottle.  The location of the end of the cable is marked with a stake.

After a few days or weeks, a larger comm unit is brought to the nest site and connected to the sensor.  This Comm unit is housed in sealed PVC pipe in a foundation of concrete. The comm unit enters a sleep mode if no sensor is plugged in. It powers up fully when a Smart Sensor is connected, and starts sending reports.

Detailed reports are regularly uploaded to a server on the Internet.  These text file reports are readable by humans and machines.  Eventually, there will be a web based interface for controlling the parameters of the system and viewing data.  If we are successful, an automated system will accurately predict hatching events and send alerts of pending hatching to wildlife managers, researchers and the general public.  To make that possible, we need to analyze the data correlated with human observations at several nesting sites to come up with a reliable signature of impending hatching activity.

There are other potential benefits of this technology. Predicting hatching can help stimulate eco-tourism for the local economy, and help with organizing volunteers to help protect emerging sea turtles. It could be used with other nesting species to monitor temperature and motion, and other applications that need to monitor motion and temperature for long periods. We calculate that our devices should be able to run, unattended for several years depending upon how often they phone in data (since that is the biggest user of power).

Turtle Sense, sponsored by Hatteras Island Ocean Center and the NPS is currently being field tested.  During the 2014 nesting season, approximately 20 prototype sensors were placed in selected Seashore nests to test the system.  This phase of development is testing the technology and collecting data from hatching nests. It may take a number of years of refinements for the system to become reliable enough for full deployment throughout the Seashore. All the development of Turtle Sense technology is being done by unpaid volunteers who are members of Nerds Without Borders.  All the hardware and software developed will be available open source.  All the data collected will be made available to researchers world-wide. 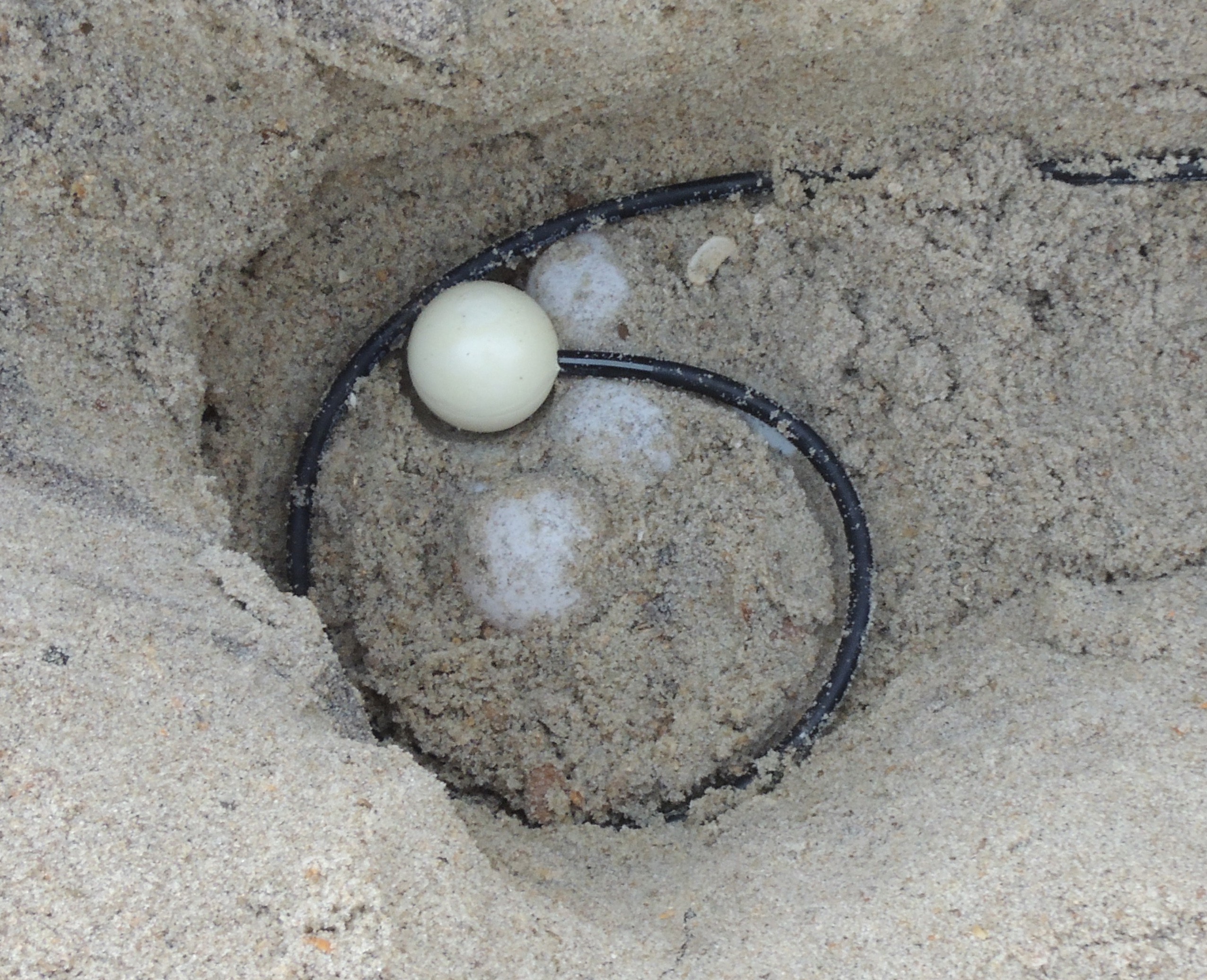 This is a picture of our Smart Sensor installed in a nest.  The sensor is about the same size as the turtle eggs. 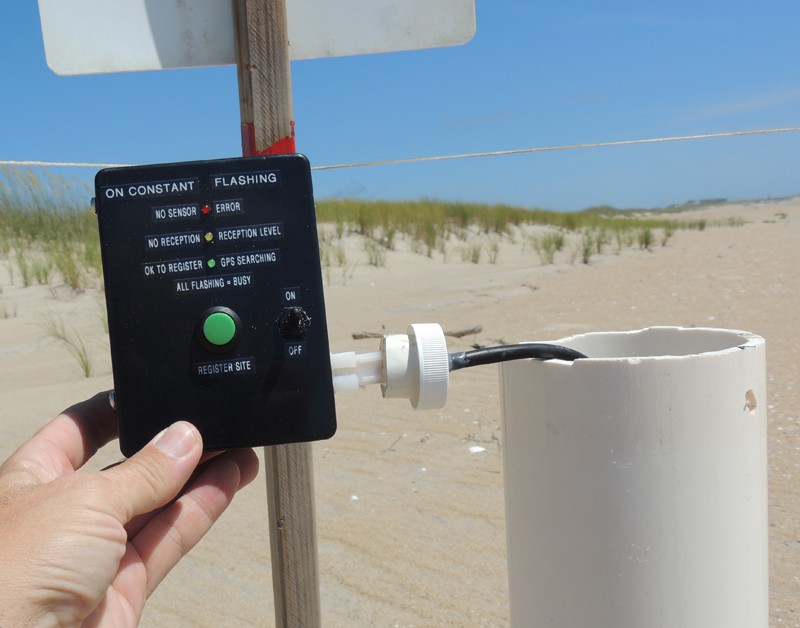 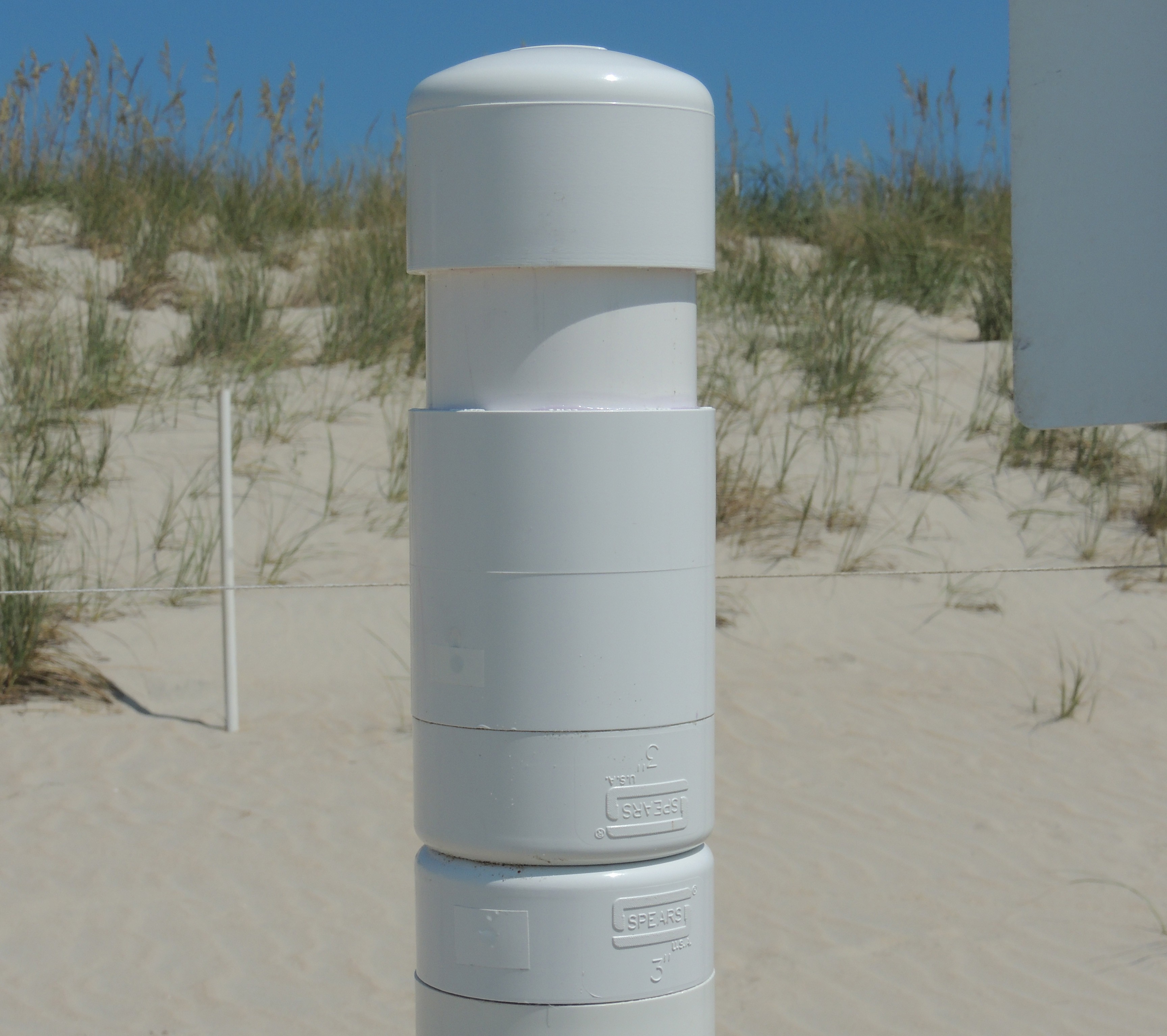 This is the head of the more rugged communications tower.  The electronics with the cell phone are in the top chamber, the batteries are in the lower chamber.  The head mounts atop a 3" PVC pipe in a cement base.

Links to more information, including BOMs and Gerber files for custom circuit boards can be found in the list of links.