This is a new design for a cosmic ray observatory consisting of small, low-cost, easy-to-use, internet-connected detector nodes based on PIN diodes. Cosmic rays are particles and nuclei which bombard the earths atmosphere and create cone-shaped showers of secondary particles. Observatory nodes are able to detect and record the time of impact of single gamma ray photons of these showers to within a few nanoseconds, as well as the energy of the photon, and are low-cost enough to create cosmic ray observatories of unprecedented size. Nodes communicate to a central database to upload data, which is later analyzed to determine the energy, angle, and location of the original cosmic rays. This information can be used to learn about the origin of ultrahigh-energy cosmic rays and can help solve the Greisen-Zatsepin-Kuzmin paradox, in which the experimentally determined cosmic ray energies are higher than theoretically possible. 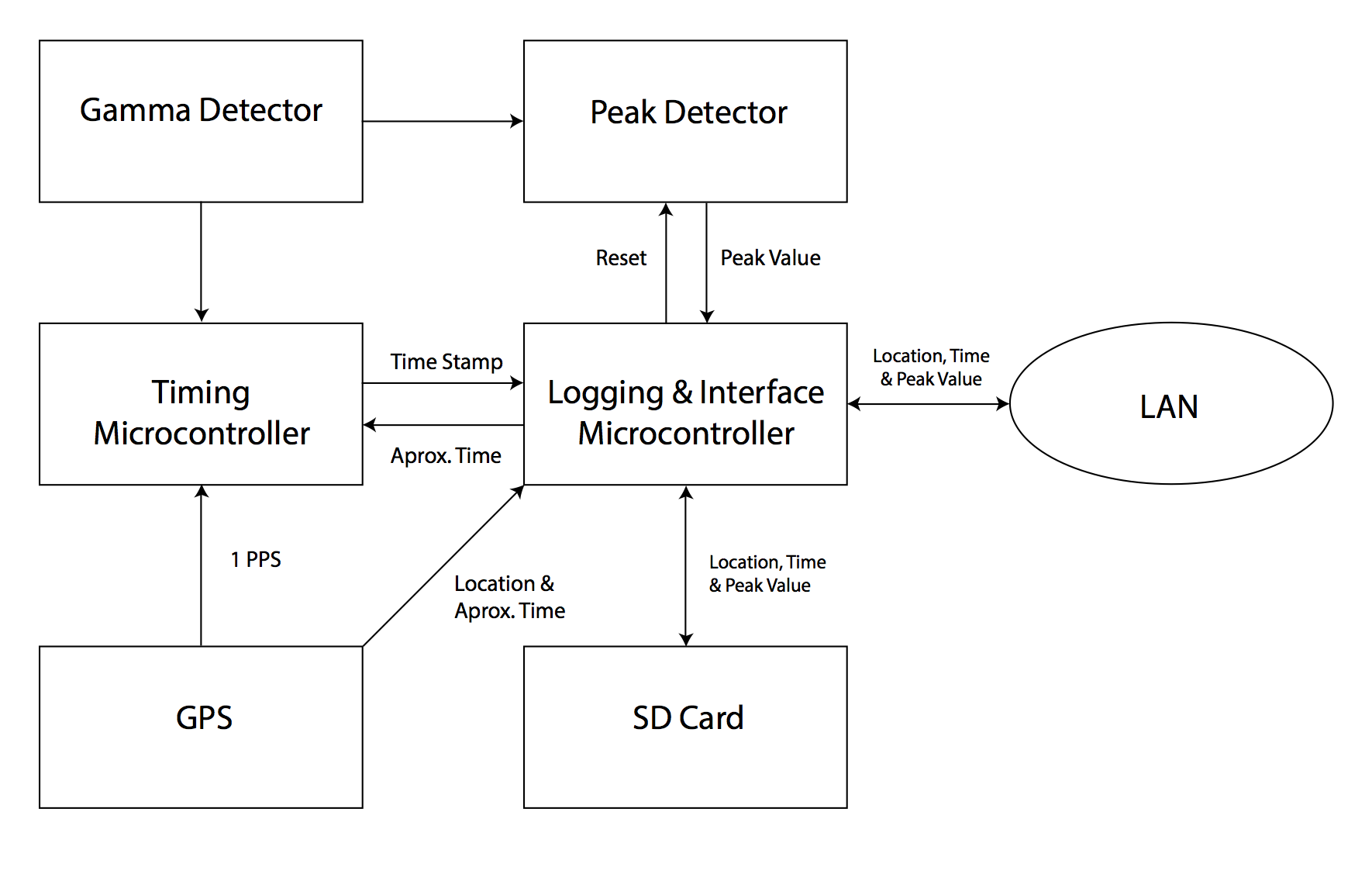 The heart of a node is its PIN diode detector (figure 2), based on a 2003 Maxim application note, which uses a photodiode...

Hi like your project.  I have some pictures of a muon telescope from the 1970s which you might find useful.  The telescope comprised of a series of inch thick iron plates with a Plexiglas spark chamber between each plate.  The sparks were focused onto a photographic plate via a series of mirrors.  There were about 50 iron plates each about 2 feet square.

The site was under the castle in Nottingham and by altering the angle of the telescope the muon flux could be measured by the amount of rock traversed.  The idea was then to link the flux variation to muon energy.

My interest was predicting and then measuring the neutron flux component resulting from the capture of negative muons in the upper 20m of the Earths surface.

It would be useful to focus on a particular energy range as lower energy cascades are impacted on by air pressure and hence will vary with prevailing weather conditions.

Another way to add absorbers is to measure at different floors in a multi-story car park and below roof top swimming pools.

I have recently become interested in this area of science and am particularly excited by the possibilities opened up by transferring the technologies in every day objects to enable more people to become involved in such work i.e. sound card based spectrometry

Hi, I have been working on something similar, I have been building cosmic ray detectors for some years now using Photo-multiplier/Sintillator, Spark Chambers and Geiger Muller tubes. At present I've been exploring a number of Pin Diode and amplified designs.

Christian Haughwout wrote 10/16/2014 at 14:18 • point
Hi. I really like the idea of your project and I would like to offer my assistance if at all possible. I have expertise in PCB design and evaluation. If you would like any help with PCBs, email me at chaughwo@umass.edu

I also remember of this projects here, one use photodiode and other use a webcam to detect radiation.

Jan-willem De Bleser wrote 09/11/2014 at 14:45 • point
Fantastic idea! The more data we have, the better, so a distributed detector would be excellent.

Have you started thinking about the data collection infrastructure yet? Anyone who wants to do some of the calculations you're talking about will need more than just their own dataset, so you'll need some way of distributing or gathering all the individual measurements. Do you envision running a central repository somewhere, where the RPIs can upload and scientists can download? Or what about something distributed, say RPIs in a p2p network distributing all measurements to all (interested) nodes?

I'd be interested in building one myself, and tinkering with the design.

aelias36 wrote 09/11/2014 at 15:35 • point
Hi there,
I have't put to much thought into networking just yet. As another commented posted below, I would probably like to look at Blitzortung, which has a similar setup but with detecting lightning. Thanks for the p2p idea; that sounds promising.

Have you got any more documentation yet?

aelias36 wrote 09/10/2014 at 21:24 • point
I was very busy with school this past week, but more documentation is sure to come! I recently spoke with an astrophysicist who researched and wrote his dissertation on cosmic rays and their detection, and I'll be writing about what we discussed soon.

masoud wrote 08/28/2014 at 02:30 • point
Very interesting project and congratulations for being selected. I am happy to see many scientific projects selected.

Legionlabs wrote 08/26/2014 at 11:49 • point
I used the Hamamatsu Photonics S1223-01 photodiode to detect 20MeV alpha particles with an almost identical op-amp chain. It worked really well, but was expensive and difficult to source. The first opamp stage required a full Faraday cage.

I tested many other PIN photodiodes without luck, but I'm confident a cheaper and more available option exists. The most promising avenue was a design I saw somewhere that used solar panels as a cheap detector in a small particle accelerator, as they are essentially high surface area PIN photodiodes. I never got it working.

I have read rumors that the venerable 2N3055 power transistor can be decapped and works, but cannot confirm.

PointyOintment wrote 08/14/2014 at 20:47 • point
Do you know about Blitzortung? It basically does the same thing for lightning, so it might be good to look at their electronics and algorithms.

aelias36 wrote 08/21/2014 at 05:05 • point
I recently learned about something very interesting: some scientists propose almost all lighting is triggered by cosmic rays. This means comparing data between lighting and cosmic ray detectors could be very useful. Again, thanks for the link!

From raw RF samples of the GPS L1 C/A signal to a position fix, in a completely open fashion
Project Owner Contributor