Receive force sensor reports from the 3d printer extruder at regular intervals on your mobile device.

This is a force monitoring solution for 3d printers with bowden extruders. The force generated by extruding filament while 3d printing can indicate whether the printer extruder is in good health or there is a fault.
With the sensor controller board connected to a Raspberry PI, we can use services such as Twitter to transmit mini force sensor data reports that can be accessed by mobile device. Data collection networks such as Xively can also be used to generate an overall picture of how the 3d printing is doing.

3d printing is mostly reliable, so it's just a case of checking the mini sensor reports on twitter occasionally while you catch up on some sun out in the garden. And you know, if there is a problem, you can still act quickly and avoid those 3 hour plus in air printing because the filament broke in the bowden tube.

It is not necessary to complete the whole project in order to get some useful functionality. I currently use an Arduino Uno and Processing on the PC to occasionally check the extruder health on my 3d printer. I would just need to add a loud buzzer to have a short range alert system. I could set the buzzer to trigger when the force sensor measurements get too high, or too low when other conditions are met.

You can checkout this article for the basic circuit and source code: Arduino Load Cell Circuit & Sketch for Calibration Test

The steps below are a summary of what needs to be done to get the project to completion. The steps will link to a more detailed explanation or instructions further down the details section of this page.

This where we look at adding some sort of controller to the load cell. Initially, you can go for the simple set up to start with as explained above, or you can get on board with the Teensy 3.1. More details to come on how and why the Teensy 3.1. 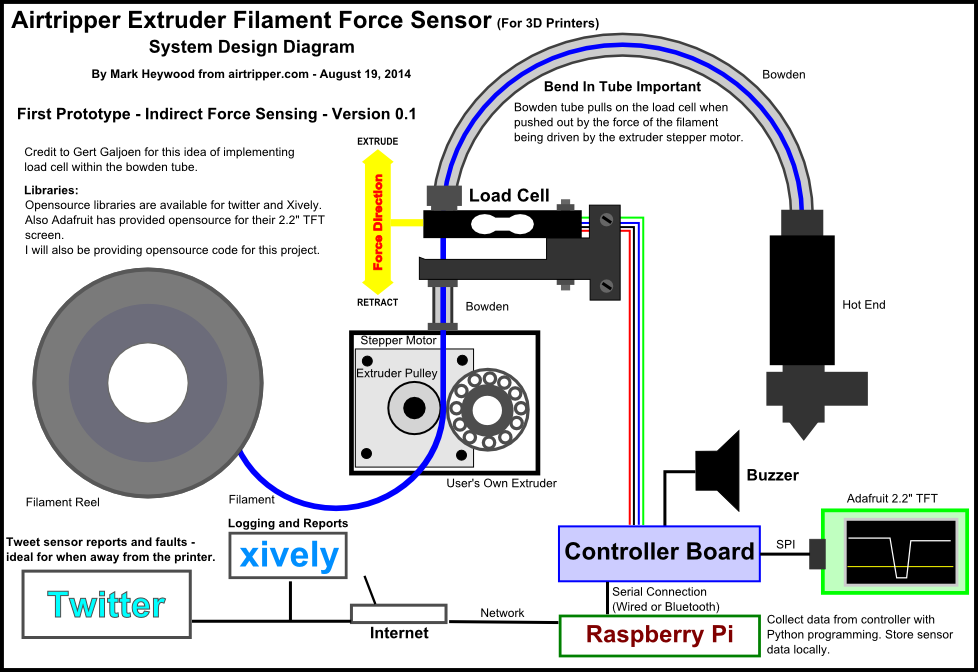 With the updated system design, this project should now be a lot more accessible to more 3d printer owners. The load cell for force sensing is now fitted within the bowden tube instead of being attached directly to the stepper motor. It should be noted though that it is important to have a bend in the extruder bowden tube in order to measure as much of the force as possible that is generated by the stepper motor. Test results of how much force is measured from the total force generated by the stepper motor will be detailed below when ready. So that the readings are consistent from the load cell, the bowden tube will need to be floating in air, electrical wires and such should not be cable tied to the bowden tube.

=====remove or rework text below

I've written a couple of articles that demonstrates how the filament force sensor behaves under different 3d printing conditions, and how it can be used to test extruder components:

Nice Project! - Do I need this?

Mostly, for the average 3d printer user, you won't need a filament force sensor. However, if you have a 3d printer with a bowden extruder, you might at least need a little help in setting the right retraction distance.

Is the filament force sensor a worthy 3d printer add-on just for a small set-up issue? Probably not.

However, what is common with most 3d printer users, there are long print jobs, often taking many hours. I'm not going to admit to leaving the printer alone for a moment during those long print jobs, but on the occasion,...