How to repair any VFD

How to troubleshoot and repair any variable frequency drive.

I am an service engineer and with this post, I would like to help people, trough some example, how they can repair variable frequency drives.

At first I would like you to understand, what is the main parts of a VFD.

On the picture you can see a variable frequency drive power section diagram, with the main parts.

From experience, I can define three most common fault, that VFDs have:

On this, I would like to show, how I repaired a Danfoss FC302 drive, which was faulty. 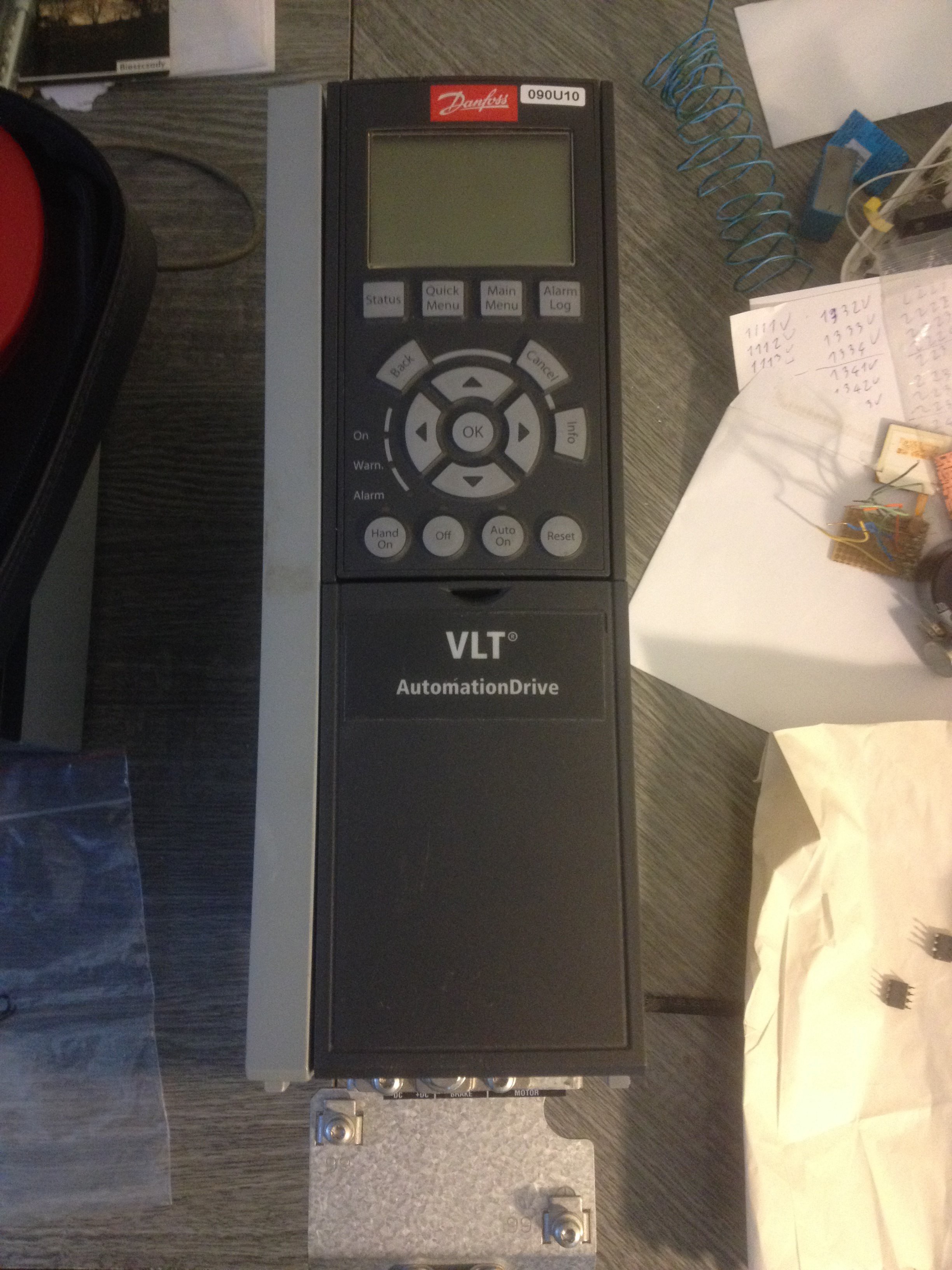 At the start it looked like this. This is a 2.2KW output power rated inverter, with 400V three phase input.

I knew it had a bad power section in it, but I would like to measure it. For the measurment you has to have a multimeter, with diode check function. At first I need the 3 phase input and the DC - bus lines for check, if the rectifier diodes are not shorted.

You can measure this, if you place one probe on the negative DC line first and then with the other probe you probe to the tree phase terminal. After the same with the positive DC line and the three phase terminal. If you did it right you shoud see the readings between 0,3V to 0,5V. If you see 0, you find a shorted diode, if nothing changed on the meter, you shoud reverse the probes or, that diode is also dead.

Often all diode good, but the IGBTs are bad, so now you have to check the IGBTs as well, before you can turn on the device.

The IGBTs have inside an antiparallel diode, so it helps with the measurments as well. Basically you can not check an IGBT inside the circuit, but what you can check is the antiparallel diode and it tells you a lot. Usually if the IGBT go bad, it go with the diode as well, so if you can not measure the diode, or you measure short, you get a bad IGBT as well.

You can measure the IGBTs with the same method then you measure the diode bridge on the input, so you put on a probe on the dc bus, with the other you check the output terminal on your drive.

Lets see an example how it is lookes like when your power modul get a short in it. 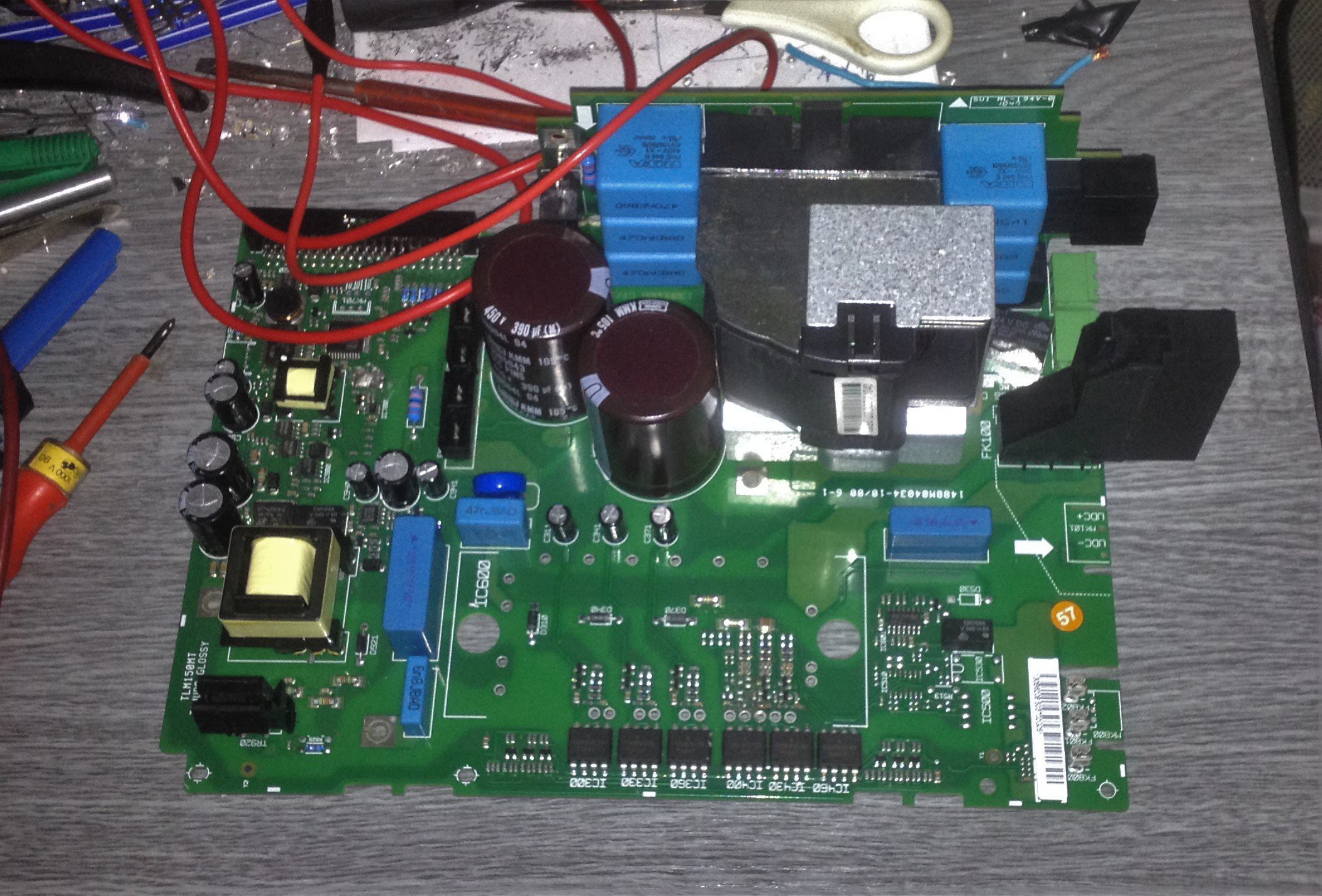 As I mentioned, sometimes you have to disassembly the entier device to measure the power section. It is the power section of the variable frequency drive that I repaired. Up there has the choke and the capacitators, on the left hase the switch mode power supply for the controller board and for the IGBT driver ICs.

The actual power modul already was soldered out from the pcb. 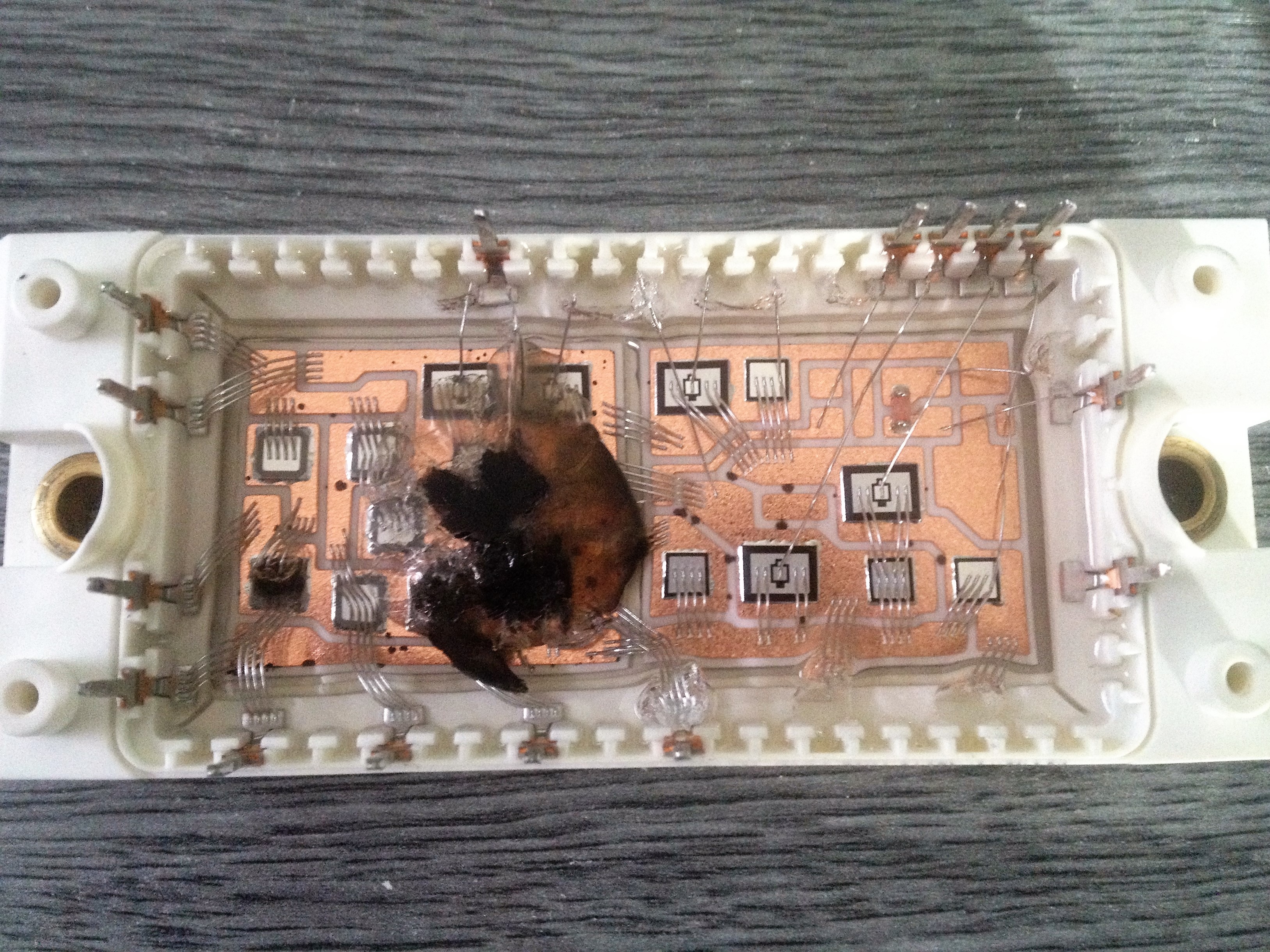 You can see it is an integrated power module, which has all the rectifier diodes and all the IGBTs in one package. This is a more effective way to save space in a drive, so it can be smaller.

These types of modules have some type of silicone that after the damage contains the smoke in it.

After I found the problem, I was seaching for an other power modul, which can substitute mine. I found one on the internet,...

i am looking for an book or on youtube about repairing the vdf and ac &dc drives.

There are lots of solution available in the market but this guide is pretty unique thanks for sharing this project details here I am working on office removals project and needed this information for that.

I would like to add that the precharge circuits in a Powerflex 700 (Frame 4 and below) have either 1 relay or 3 relays in parallel depending on Frame size. The 3 in parallel act as one so if any of them short then the circuit will bypass the inrush resistors thus shorting them to zero Ohms. The precharge circuits with relays often go out on drives with many power cycles.  If any of these relays short then the precharge resistors are stuck in bypass. This issue WILL cause an inrush current that is not mitigated by the 41 Ohm precharge circuit and could charge the DC BUS Capacitors too fast causing dangerous catastrophic failure of a capacitor. Capacitors that sit for extended periods of time such as 2 years or longer need to be "reformed" before use in a drive or could potentially fail. The capacitors are configured in series if you have two. The capacitors are configured in series/parallel if you have four. Since they are 400VDC (480VAC 3 phase drives) this makes for 800VDC capacity and the Bus voltage (480 x 1.4) sits around 700Volts giving a hundred volt buffer for Deceleration spikes which generally only get to 750VDC.  If you have seen YouTube videos on capacitor failure then you may understand the seriousness of a failing capacitor. I would like to add that the capacitors blowing up on YouTube are not 400V nor are they thousands of Micro-farads so the magnitude is like comparing a BB to a Cannonball. Serious Injury or death can occur if safety measures are not taken into consideration when dealing with VFD operation or repair. Hopefully this post will inspire you to take extra precautions before performing repairs if you insist on being a hero. However I recommend you send your VFD to a reputable company such as ISAelectric for repair. The turnaround is very fast and it is safer to let a qualified person do the work that comes with a 2 year warranty. Always check that the BUS voltage is drained before touching any VFD, if the bleedoff resistors have an open circuit your BUS Voltage is there even without Line Voltage applied. Be Safe Please, Good Luck.

hi! Let me congratulate you for your work it's awesome

Hi! Sorry for the late reply, thanks for reading my post. What is the question?

i am looking for an book or pdf about repairing the vdf  and ac & dc drives .

if anyone can help me , pls send me an email ?

thank u so much