This is what the Channel Status subchannel looks like in binary:

The code that I used for this output prints a block counter, followed by the Channel Status subchannel in binary (chronological order). As you can see, it contains the expected data: 11000011 in the second byte, because I connected my Propeller to a Digital Compact Cassette recorder which uses category code 110 0001L and this is a prerecorded tape so L=1. The rest of the data is all zeroes, which is a little boring but this at least demonstrates that I understand how block decoding and subchannel demultiplexing works.

To get this output, I created a quick-and-dirty copy-paste module based on the status channel decoder, which doesn't just copy the status channel bits but entire blocks of subframes. This is what full blocks might look like in hexadecimal (actually the following output only shows the subframes for the left channel): 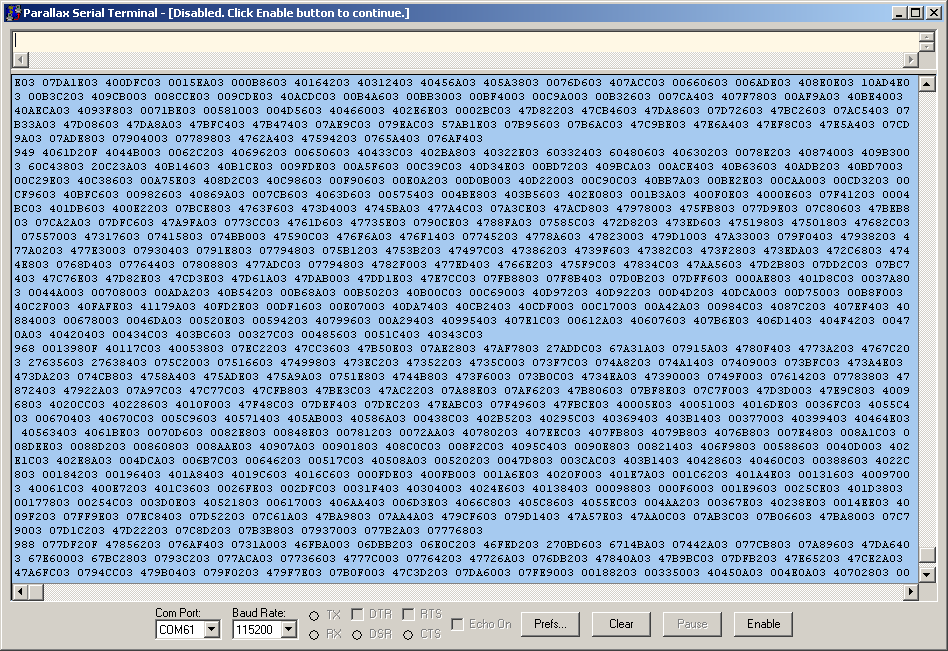 The Channel Status subchannel is bit 30 of each subframe, in case you want to dig through the hexadecimal and make sure it checks out :-)

So as part of narrowing down the problem with my subchannel decoder which only produces zeroes, I've proven that the data is there and has the expected format. Obviously there's something wrong with the PASM code that extracts the bits and sends them to the hub.

I must be overlooking something in the PASM code or I'm misunderstanding how Spin works to copy the data.

I found out what the problem was with the subchannel decoder: there was a rogue JMP in there that made another instruction unreachable that was needed to increase the destination address of the rotate-instruction. So yeah I saw a lot of zeroes because I had bit storage in the cog initialized to 0 and the $C3 in the second byte wasn't showing up because the first longword (that has the $C3 in it) was overwritten by 5 other ones by the time I got to see it.

I rewrote the status channel module to be more universal (it can now also be used for the user data channel) and it looks like that works. Yay!

However: remember I was hearing horrible distortion in the audio generator sometimes, that I could eliminate by resetting the Propeller? It looks like this is not a problem in the audio module, but in the biphase decoder. Apparently sometimes (and with sometimes I mean: way too often) it somehow locks onto the signal in the wrong way. I'm going to have to fix that because it's crucial for that to work. I must have overlooked some sort of corner case. I'm pretty confident I can fix it with a change to the initialization of the biphase decoder and/or preamble detector.

I Added a Status Subchannel Demultiplexer