[Edit 2019-11-15: This is becoming the never-ending project. I have been prodded by several people that want to extend the design to work with a stack of supercapacitors. I had no need for that, so I did not put any effort to insure the functionality of a stack, other than allowing for it by programming some component values on the PCB. But since the capability is there it should function correctly. I'll be trying to implement the dual supercapacitor functionality over the next few days/weeks.]

I have 3 Raspberry Pi computers running 24/7 in headless mode scattered around my residence. One of them is an old Pi1B that manages my heating system and monitors my water well. I consider it a mission critical piece of hardware. Invariably, when I leave for a trip in the winter the power will fail, so I need a means to automagically and gracefully shutdown all of the headless Pi’s.

I built a working UPS using a stack of two 400F supercapacitors about three years ago: https://www.raspberrypi.org/forums/viewtopic.php?f=37&t=50470&hilit=controlled+shutdown&start=25. It was a relatively simple solution that did not make very efficient use of the supercaps, but now with more power hungry versions of the Raspberry Pi I decided it was time to build a new one with higher load capacity (and re-purpose the supercaps).

The energy that you can get from a capacitor is simply

So just stack them like batteries then. What’s the big deal? When you stack two identical capacitors in series you get half the capacitance value. This is actually not as bad as it sounds since your energy capacity goes up with the square of the applied voltage. So if we had a stack of 4 supercaps that we could put 10V across would produce 4X more energy than a single supercap with 2.5V across it. Or conversely, you could use smaller supercaps to get the same energy output. The basic problem with this thinking is that the prices of supercaps don’t scale linearly with size — a 400F is $12 while a 100F is $8-$12, so 4 of them will cost a lot more. Another issue with stacked supercaps is one of balancing. The capacitor voltages need to be kept in balance to avoid exceeding the rated voltage. This requires extra circuitry, cost and complexity in the charging circuitry.

My heating system only needs backup power long enough to shutdown the system — a last gasp.

Analog Devices recently (as of 2018-10-1) released the LTC4041, a supercapacitor backup IC. It takes care of the charging of the supercapacitor and the balancing, if there are two of them. It also manages the switchover from powering the load from an AC source to powering the load from the supercapacitor backup. What it doesn't manage is the timers required for the interval when the Raspberry Pi is committed to shutting down and the power-off interval which resets the Raspberry Pi and allows it to reboot when AC power becomes available again. This is the required functionality of the design:

This is the latest schematic, which should work for a single or dual supercapacitor implementation:

There is quite a bit more functionality than the original discrete design, while lowering the component count drastically. The LTC4041 automatically charges the supercaps with a programmable current. If the total current drawn from the input source exceeds a predetermined threshold then the supercap charging current is reduced to avoid overloading the current capabilities of the input source. When the input power fails the LTC4041 detects the failure and automatically switches from using input power to drawing power from the supercap via a switch-mode boost converter -- up to a maximum 2.5A load current at the output (2 supercaps required to get 2.5A).

What the LTC4041 doesn't do is timeout the interval that the Raspberry Pi needs to safely shutdown to avoid corrupting the SD card which contains its operating system. I've provided some additional circuitry to manage that task.

When the input power fails the PWRGOOD signal is pulled low by the LTC4041 to make the Raspberry Pi aware that there is a power failure, and it switches over to providing power from the charge stored on the supercapacitor. If the power is not restored before a period of time determined by the Raspberry Pi then the Raspberry Pi asserts the SHUTDN pin. A one-shot is then triggered, which keeps power applied to the Pi for about 20 seconds, allowing the Pi to terminate running processes and enter a shutdown state. At the end of the one-shot interval the power is removed from the Pi for at least 5 seconds. If input power becomes available again during this shutdown interval the power is not made available to the Pi until after the power is removed for that 5 second interval -- this prevents the Pi from hanging in a perpetual shutdown state.

The circuit waits in a standby mode until input voltage increases above 4.8V and the input switch reconnects the input source to the Raspberry Pi, allowing it to reboot, and also begins the process of recharging the supercapacitor(s).

There are essentially three configuration options now. A PIC10F202 can be used for a single supercap solution, but R18 and M2 must be depopulated. Otherwise the PIC10F322 should be used with both R18 and M2, and R9, R10 and R4 set to the correct values for either 1 or 2 supercaps.

The following is a description of the original circuit, which employed a lot of discrete devices since there really wasn't an alternative. It’s a lot of parts, isn’t it. When things have to work at low voltages there aren’t a lot of options.

So how does this thing work? Beautifully! Here’s a scope trace of the UPS holding up the output to a 2.5A load when input power is unplugged. 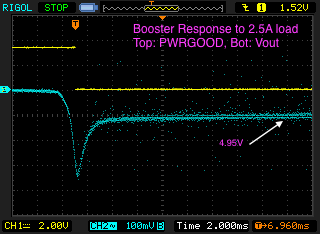 But I found that it is way over-designed. I expected my Raspberry Pi 2B to be quite a load, but a power fail event only takes the 400F supercap down by about 45mV, and that is with all 4 cores running 100%. That’s an average load current of less than 400mA (over 30 seconds). I tested a RPi3B as well and the supercap voltage dropped by about 55mV.