A few days ago, I wanted to add an RFID reader to my electric gate opener because HF remote controls are quite expensive. Unfortunately, during the wiring of the reader, I screwed up the existing controller board (with a short-circuit on the mains transformer...). Too bad for me, I should have disconnected mains power before that. Lesson learned. As I can't find any decent schematic on the web, I decided to design my own bi-DC motor controller. Of course, I want to add some nerdy features that usually cost a lot on this type of consumer electronic devices (like wifi-enabled electric gate opener).
The feature of this boards are:
- 24V DC motor controller x2
- automatic search of the limit switch (with overcurrent detection)
- remote control (HF 433MHz or ISM band)
- dry-contact input for RFID reader, keypad, mechanical key...
- uart interface to an embedded computer (Raspberry Pi typically, but most linux SBC should be fine)

I have seen many hacks about remote triggering automatic gate openers (wifi, bluetooth, whatever-wireless-protocol-connected). But, correct me if I am wrong, I cannot find any open source hardware project about a controller board for a typical 2 motors configuration usually found in a lot of houses like the one I live in. 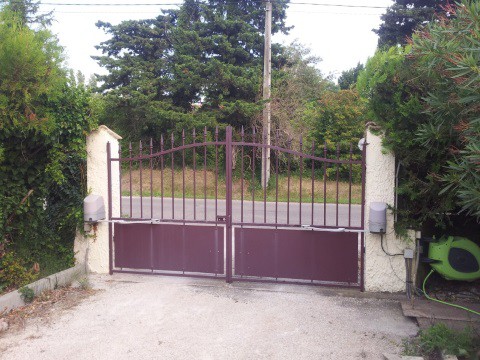 Finally, after burning the existing controller board delivered with the (proprietary) automatic gates (silly me), I decided to design my own board and make it OSHW (and software).

It is a way for me to learn a few things I have in minds since quite a while: kicad software, decent power switching motor H-bridge. 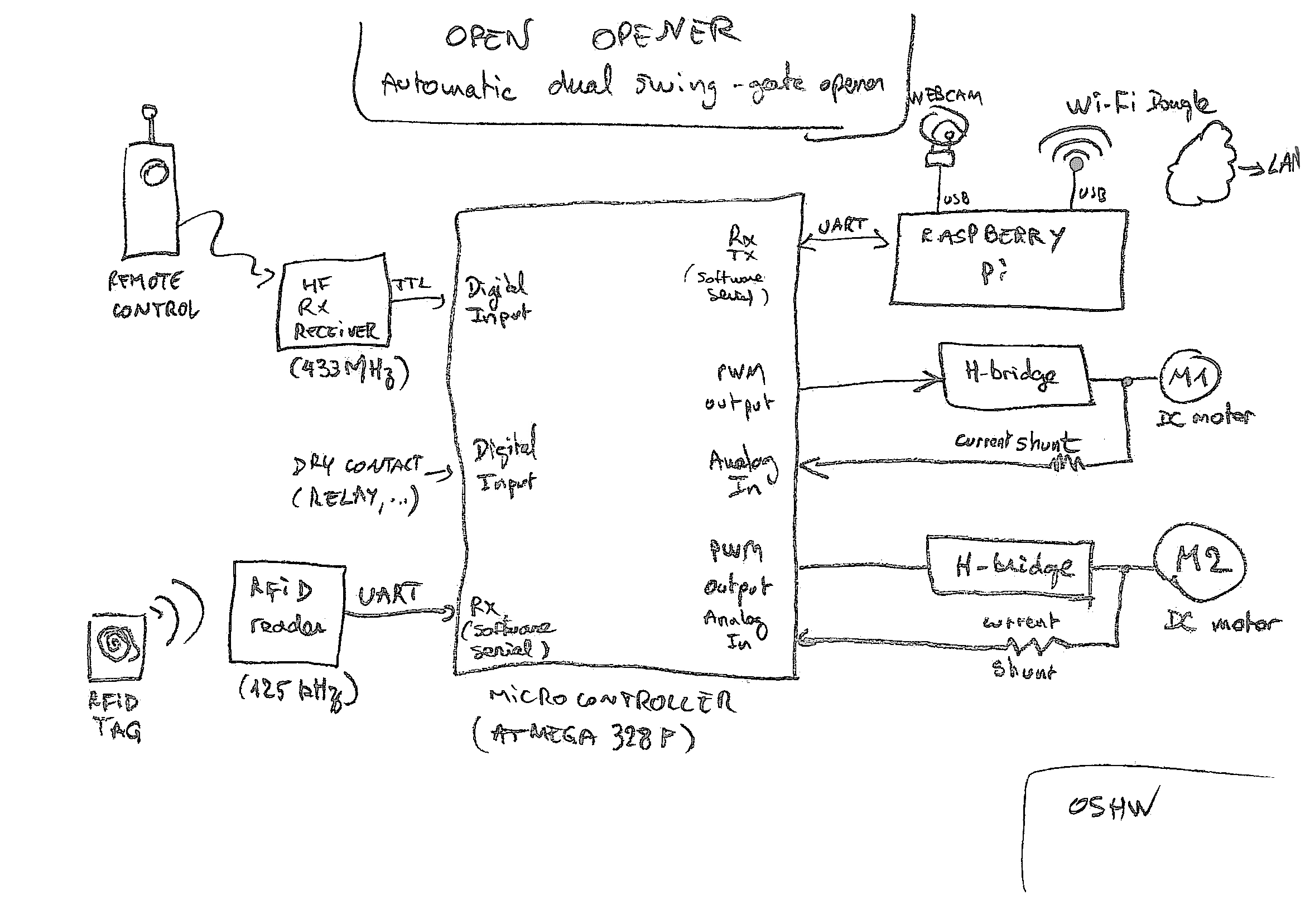 Here are the features that I need to make an automatic gate opener to work for a dual arm entrance gate:

- 2x H-brige for 2 DC motors (24V like most of the automatic systems). The motor-controlled arm opens and closes, so each motor must rotate in both directions.

- a current monitoring device for each H-bridge to detect the limit of each gate (fully open and fully close). It is similar to a electric car window device: when a peak current is detected, controller stops the motor. An overcurrent condition may be caused by an obstacle (cars, children, ...) during an opening or closing movement, stop the gate has to stop to be secure.

- acceleration-controlled start and stop: to prevent too much inrush current, the motor has to follow an acceleration curve to prevent inrush current during the start or stop phase. Moreover, the gate tends to oscillate if the motor starts and stop brutally. So it is better to keep those critical phases under control. The motor is connected to its DC power supply via a MOSFET. By switching its gate with a PWM output of a microcontroller, we can speed-up or slow-down the motor with the PWM duty cycle.

-  My double-wing gate has a priority to respect whether it opens or closes. So the controller has to setup two different sequences for the opening or the closing process. I have to implement a delay between the first and the second arm. 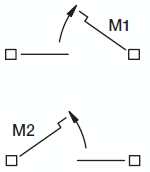 - Ideally, I want my controller to be smart enough to learn (at the initialization of the board) how many time it needs to open or close. In that way, the controller can time-out if a sequence lasts too much time. It should also report some issue. This "smart" feature should also determine the delay beetween each arm and the speed of the motor (it must slow down in order not to bounce againt the mechanical limit of the arm).

- Most of the automatic gate controller have an awful human-machine interface: if you have more that a few leds and push-buttons, your controller must be very pricy. So I'd like to implement a wizard interface to initialize the system. There are a few steps that has to be humanly assisted to setup the controller for your particular needs. Let's make them understandable, at least by me, and preferably to my mother also. It could be as simple as a USB cable to a terminal program that writes, in plain english text, what you have to do and what the controller is actually doing. Not pricy at all, but way better than morse code on 2 or 3 leds (I wish I could decode Morse code too, but it is another story).

- dry-contact input to add a  push button, a mechanical key, ...

- I want a gateway to a computer board (like a raspberry pi or another SBC computer). Well, I don't need that, but I am miserable and with all that Internet of Things thing, I feel it is mandatory these days to have a wifi controlled gate opener ;-) More seriously, it is nice to log unwanted events in case of something goes wrong and I want to keep the system open(!) for future features like a video intercom.

Could you please provide me circuit diagram. I am student and my mail id is inayath77@rocketmail.com

Hi there - Was looking to build my own gate opener also. What is current state of this?

Hello. I wish I had more time to make this project better. I tested it with an ESP8266 and it seems promising. I didn't test some ideas I have to solve the motors current measurements problems.

This is Interesting project I had same problem with my gate opener  board !

can we include mechanical limit switch at either ends swing range and use one input on arduino  to detect this  and switch of the motors ?

Hello, we could definitely give a try to hall effect sensors. The other option is a high side shunt or a bidirectionnal current shunt monitor.

Limit switch are a good option to detect the end of movement. But, for a security view of the system, it is almost mandatory to check if a current surge happens during the oening of the gates (child, animal, car, ...) to stop the motors.

I haven't mechanical switches on my gate opener, so I will stick to current detection to switch the motors, but there are some spare pins on the Arduino board to implement this feature. In this case, I would use the interrupt pins INT0 INT1 for the limit switches (and some debouncing).

Your "Open Opener" program is awesome! Thank you for this!

I have made this, works fine, but I have a question about the shunt resistor, and about this resistors wiring...

My Linear Actuartors consumed 1.30A with no load. With load: 2Amp

How much value are you suggesting of the resistors?  Can you help me with a practical hand made schematic, about the resistors wiring to the Arduino?

Sorry for my poor English!

The current sensing on my project is not so great, so I won't advice you to do the same current sensing circuit that I used. It barely works for my needs and I probably won't work for another system.

However, you have to match the resistor value to your voltage supply and your Arduino analog input (5V max). Let's say your power supply is 24V, if your actuator draw 2A and your shunt resistor is 0.1ohm, your will have 0.2V across it which doesn't impact the 24V power supply. You should use a 10x amplifier to have 2V on the arduino analog input.

This could be done with a current shunt monitor (CSM) like the INA21x serie IC (or INA219 if you want a digital output).

This vesion goes to my friend gate, whitout current sensing.....

Now I use a well selected fast response 5x20mm fuse to the gate.

My actuators have inbuild limit switches.

This vesion goes to my friend gate, whitout current sensing.....

Now I use a well selected fast response 5x20mm fuse to the gate.

My actuators have inbuild limit switches.

Manu wrote 10/09/2014 at 19:54 • point
I received yesterday a t-shirt for my participation for the hackaday prize. Thank you Hackaday!

Manu wrote 08/20/2014 at 08:40 • point
The (very formal) video for the project description: http://youtu.be/xbExZyaC3zs
Sorry, I don't have a video showing the gate opener for now. I will post it on youtube as soon as possible.

Personal project to develop a quad copter using as much self designed circuitry and software as possible.
Project Owner Contributor

The Zytek drivetrain has a built in inverter with proprietary CAN interface. This project will replace just the microcontroller board.
Project Owner Contributor