Chemical reactions modeled by counting particles and using random numbers to see if a reaction occurs. NO differential equations!

For a bimolecular reaction involving two molecules A and B, with concentrations [A] and [B] and a rate constant K, the probability of the reaction occuring (from mass action) will be K[A][B] . Assuming a time step which is short enough to make the probability of reaction small during the step, the mass action probability is equal to the probability ([A]>randA && [B]>randB && K>randK). Where && is the logical and operation, and randA, randB and randK are uniform-distribution random numbers (Salwinski and Eisenberg and Keane, et.al.). We can therefore replace the expensive multiplies with inexpensive logical operations and random number generation. Random numbers were generated using a linear feedback shift register technique. The shift register length was chosen so that only one xor operation was needed.

The first reaction scheme I implemented is a slightly expanded version of the system presented in Salwinski and Eisenberg. Expansions were the ability of several update events to occur for a given molecular species (as in Keane, et.al.). Examples are below. Each chemical concentration is represented by a 16-bit integer. Each reaction path can increment (+1), decrement (-1), or not change the integer concentration of a chemical at each time step. The restriction of only simple increment/decreement means that reaction probabilities must be adjusted so that the likelyhood of changing the chemical concentration by two or more is negligible. In practice the probability of reaction is set to less than 0.01, so that the probability of two events occuring is less than 0.0001. Salwinski and Eisenberg limited the update so that only one reaction could update any chemical at any time step. I added a queue so that several reactions can update a chemical at each time step. The advantage of my scheme is simpler reaction control, the disadvantage is a longer state machine on each time step. Each time step is seven clock cycles, allowing six inc/dec inputs per chemical per time step. 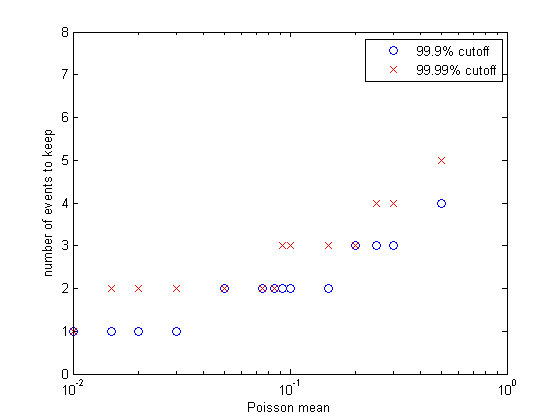 More generally, what we are doing here is approximating a truncated Poisson distribution of reaction events. We can make a better approximation by allowing concentrations to change by more than +1/-1. Let's say that we make the criterion that our approximation of the Poisson distribution has to cover 99.99% of the full distribution. Or, put differently, the cumulative sum of the discrete distribution has to be 0.9999 up to the point we truncate. I wrote a matlab program to plot the event number at which the cumulative probability reached 0.999 and 0.9999. The figure (left) shows the results. Keeping only one event per reaction time step limits us to a mean rate of 0.01 at 99.99% capture and about 0.03 at 99.9% event capture. For a mean reaction rate up to about 0.085/time step, keeping up to two events per reaction captures 99.99% of the events. Keeping three events allows reaction rates up to about 0.2/time step (at 99.99% capture). So using the 99.99% criterion, keeping two events instead of one event gives us about an 8-fold speed up, while keeping three events only gives us another factor of two above the two-event rate.

So what do we need to do to implement a maximum of two events? If we model the two reactions as separated in space, and therefore independent, we need to compute the probability of two completely independent reactions separately, then decide if 0, 1 or 2 events occured. If either reaction occurs set the inc/dec outputs to +1/-1. If both occur set the inc/dec outputs to +2/-2. If neither occurs, inc/dec are zero. This seems to be a workable system and was implemented below. A manuscript version of this description is here.

I did my master thesis of the FHP3 descrete model of fluid dynamics, which only uses bits to represent particles on a hexagonal lattice. Since then, I see differential equations very differently and I am always looking for the microscopic and descrete mechanisms that are often "simplified" by these kinds of equations...
OTOH it has only comforted my mathematical laziness ;-)

This is accurate down to one molecule, but of course the variance will be high, as it is in real life. As far as I know, it is the only way to efficiently simulate at very low concentrations.

Could this give you insight into local chemistry or reactions that occur at very low concentrations?  In large reactions or at high concentrations, this converges with standard kinetics models... so is it more accurate or computationally cheap?

Bit-serial CPU based on crossbar switch