Idea of a modular architecture of the device

With the flow sensing element being defined (ferrite-flow-capsule and hall sensor), we can now think of the architecture of our sensor device. Because we use a hall sensor for detection, we gain the freedom to have some millimeters in distance between the spinning ferrite and hall sensor.

At first, we must resist the engineer’s urge to start off designing a cool new, high tech, flow measuring, IOT drinking device (with lasers!). Something like the “Hydracoach Water Bottle”, a commercial product which comes close to what we try to develop here. It was even tested for its usability in care, and apart from many disadvantages, the test users disliked it purely for the fact that they had to drink from this massive, heavy piece of plastic. Instead, they wanted their cup back, with which they used to drink before.

Note: the device has to be somehow small and more something you put IN BETWEEN the cup and your mouth when drinking, not a new futuristic drinking vessel (even if it has lasers).

During my experiments with the flow sensor (see last update), I destroyed one ferrite-flow-capsule by drinking orange juice with tiny pieces of fruit pulp in it (the ferrite got stuck). It might be a good idea to build the device in such a way that the capsule could be replaced.

The device consists of two major units: the mouthpiece (3) and the sensor unit (2). 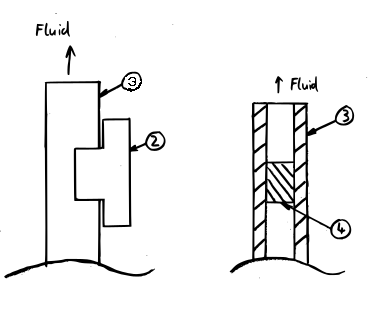 The sensor unit contains all the electronics, battery and the hall sensor. It is attached to the mouthpiece by a detachable connection, in a piggyback-way.

Here are the benefits of this approach: