I like to design a new UI firmware for this 3D printer. But first I had to reverse engineer the UI PCB including the display driver.

My goal is to write a new firmware for the UI controller of the MP Select Mini 3D Printer.
I'm thinking about Interesting features like a bed levelling assistant, a guided filament change or even funny things like a total runtime counter.

But before we can start developing any software we obviously need to reverse engineer all the related electronics. I'll go through the communication between both the motion and UI board and also find out what display driver they used by sniffing the SPI traffic.

Basically there are two important things to know before we can proceed writing a new firmware.

I wrote about all the main steps of the process. If you like to see everything in detail please take a look at my YouTube Video.

First, there is some communication happening between the UI and motion controller board.
So the first thing I did was hooking up the scope to see what happens between both boards. 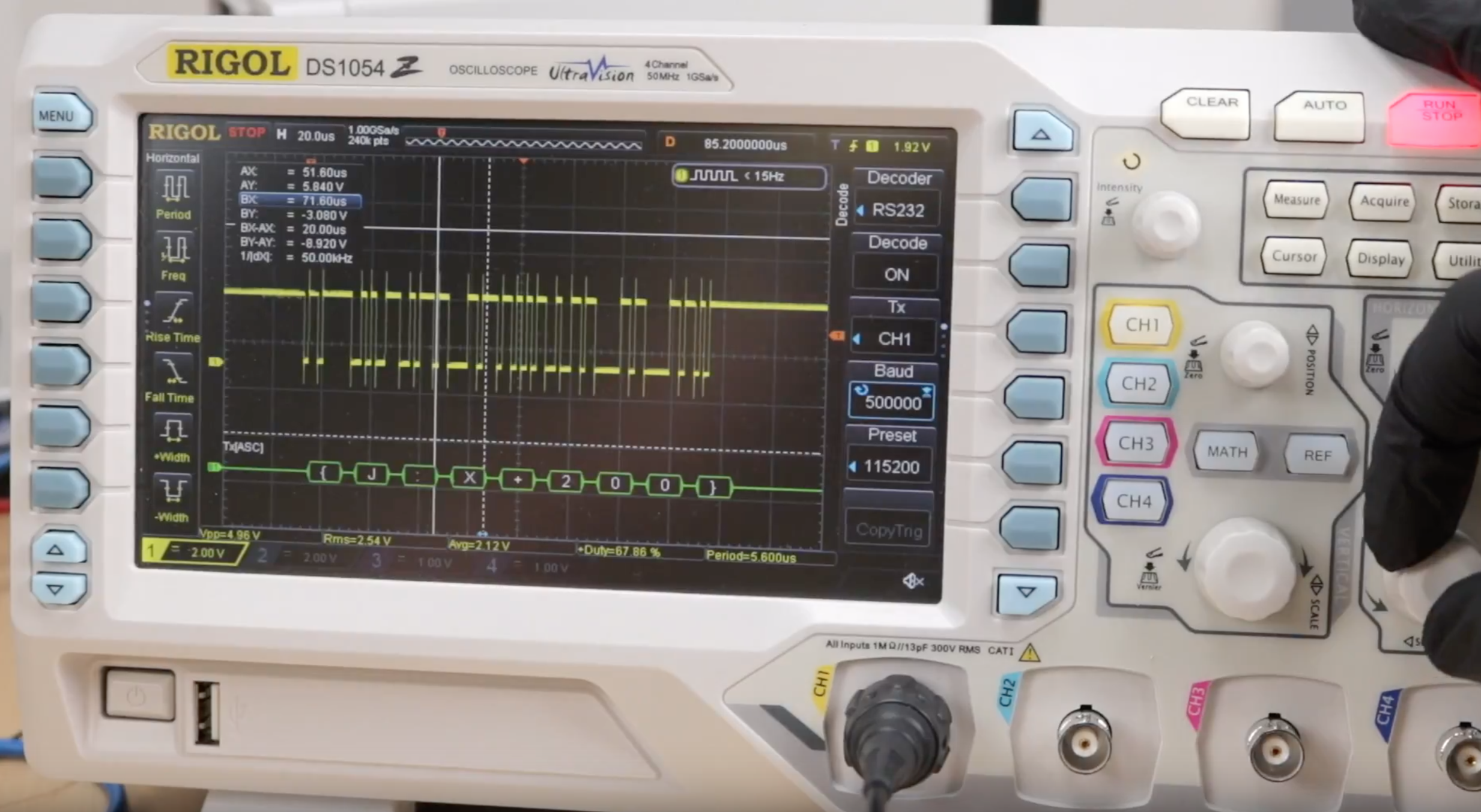 These boards communicate via UART at 500kBaud.
The UI controller transmits strings like:

And second there is a 320x480 TFT Display attached to the board. (They are actually glued together with double sided tape). I had absolutely no success in finding any datasheet, pinout or any other piece of information about how to drive it. So I decided to sniff the traffic sent by the stock firmware.
They are driving the display in a so called 3-Wire SPI mode. That means every data packet contains an additional 9th bit indicating wether this packet should be considered 'data' or 'command'. 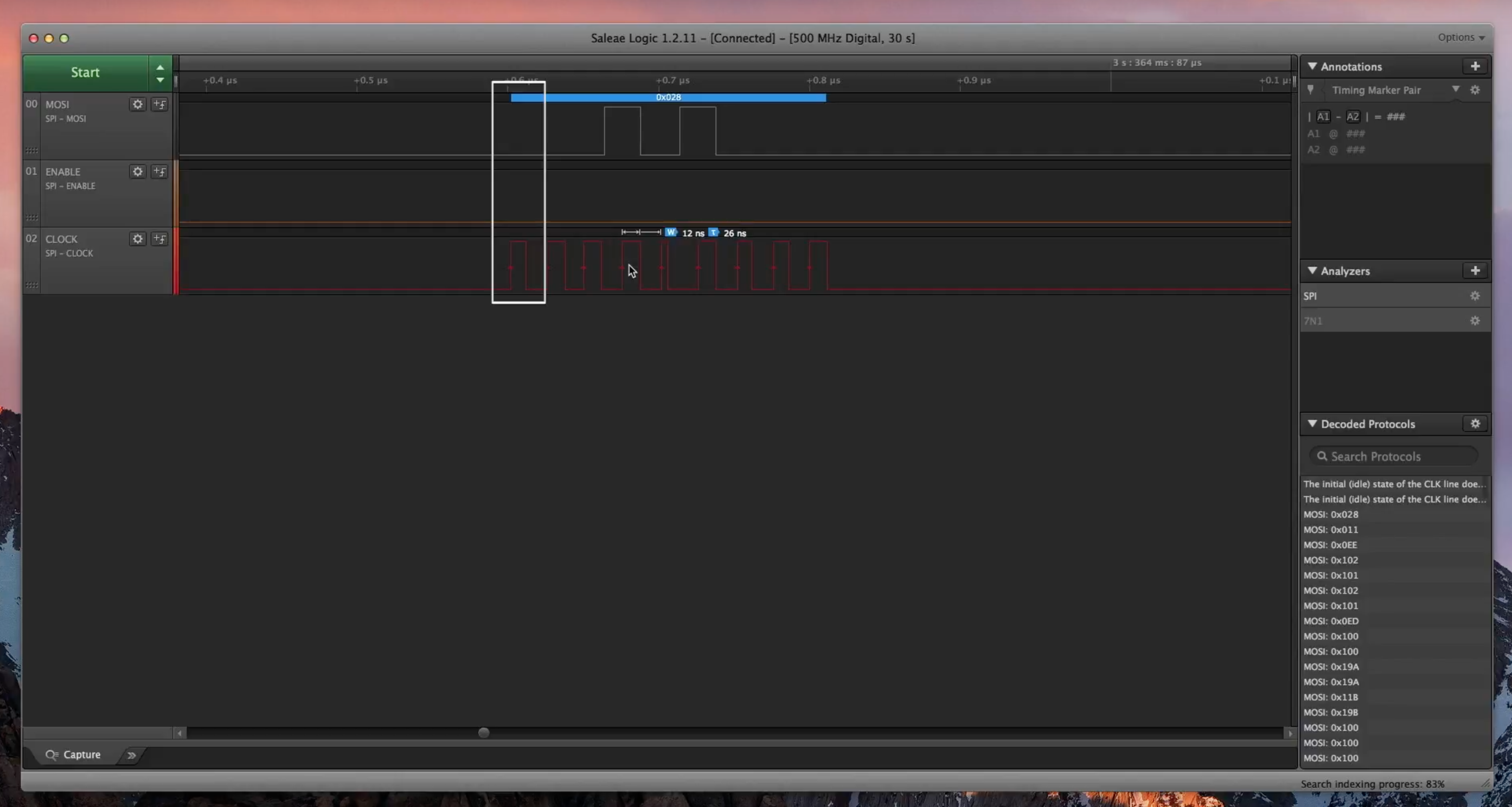 So usually those displays all have some initialisation you have to do on startup. That could be something like it's orientation or how you like to push RGB data.

What all pretty much have in common is that there are commands named Sleep Out/Sleep In and Power On/Power Off.

Usually, the first thing you do is call sleep out and power off on startup.
The first two commands transmitted over SPI are 0x28 and 0x11.

So I searched for all display drivers that are able to manage a 320x480 pixel TFT and use 0x28 and 0x11 as their sleep out and power off commands. This took a while but at the end of the day I found out that its most likely is the Himax HX8357 or compatible.

Before flashing my own firmware I made a backup to be able to go back at any time.

And yes, it is working! I've published my code on GitHub and already started to work on the actual firmware.
I really had a great time working on this project! 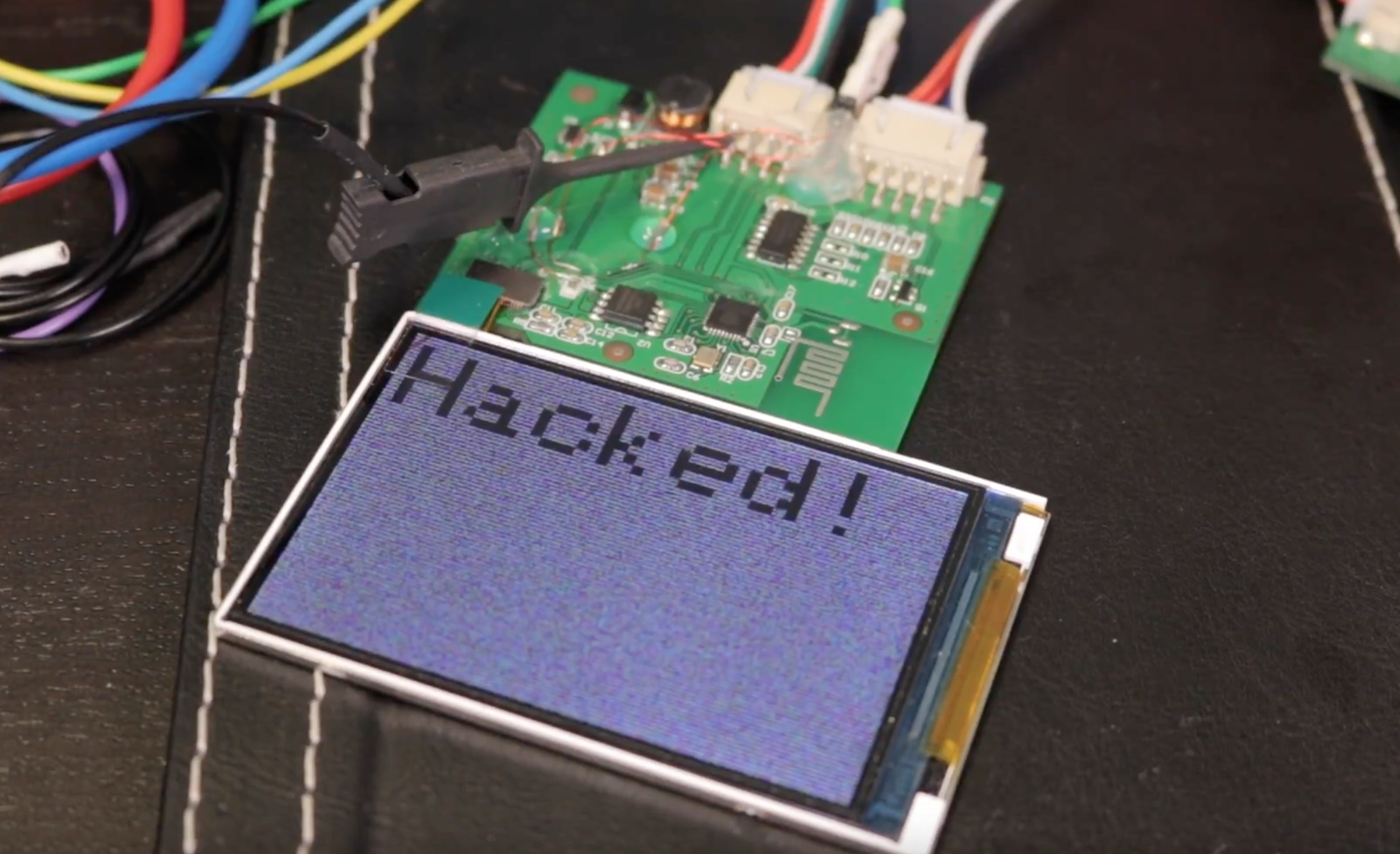 All I have been able to find out about the LCD panel shown in the video is that it is a TIANMA TM032PDZ04. It is listed as discontinued. There are a couple of sites that indicate you might be able to get the datasheet upon making a request. One such site is lcd-panels dot com.

It would be nice to have some open source software for the printer. One thing I've noticed about it is you can't see results of commands when they are issued via telnet access to the printer. When you issue a command it will say it was executed but any command that is supposed to show values won't.

would you be able to provide the pin out on the board for the usb port. I have a unit where the usb port has broken off and is not repairable. Would love to patch into the board in the right spot to be able to get usb connectivity again.

I have a hacked pronterface printing via the 500,000 baud USART previously occupied by the UI controller. I'm wondering if you've learned anything useful about how they communicate. I'm just ignoring the high bytes with the curly bracket commands for now.

Unfortunately, I can't get much out of the ESP board 'cause mine's cooked.

When you start programming the new UI, there is a list of this printer's {CMD:PARAM} codes here: http://mpselectmini.com/communications

I wonder if the Display Controller can handle sending gcode though?

This is so cool Robin. Thanks again for sharing your journey.

Now for ideas. I have seen some other printers have menu options for purging the hotend between filament changes. It would be awesome to have that under the control menu. I installed the Custom Control Editor in Octoprint so I could add just such a command. Here is the gcode for my Purge command:

I also added an Unload command which retracts the filament to the extruder:

I know that last one is awfully lazy... but I have to wait for the bed to cool down inbetween prints anyway, so why not let the printer unload the filament most of the way for me. :)