Run a 6040 engraver/mill with an SKR controller
running smoothieware, and get rid of the clunky old Windows PC and parallel port.

I decided to get rid of the PC and replace the parallel port interface with USB so I could run everything from a laptop. I started off with the idea of using a Mega2560 and GRBL. Recently discovered the SKR controller which runs smoothieware and decided to use that instead.

I'll be updating the project logs as the work progresses.

Maintaining Windows and a closed source app on an obsolete computer was a non-starter for me. I loaded LinuxCNC on a Core 2 Quad box, and was able to verify that everything worked.

I wanted to be able to control the system from a laptop USB port. I chose GRBL on a Mega2560. I looked at possibly using a RAMPS shield or something similar. I plan to drive the stepper control board inputs directly from the Mega, so I don't need motor drive circuits. For the end stops, VFD, pumps, etc, I'm going to build my own interfaces as required. 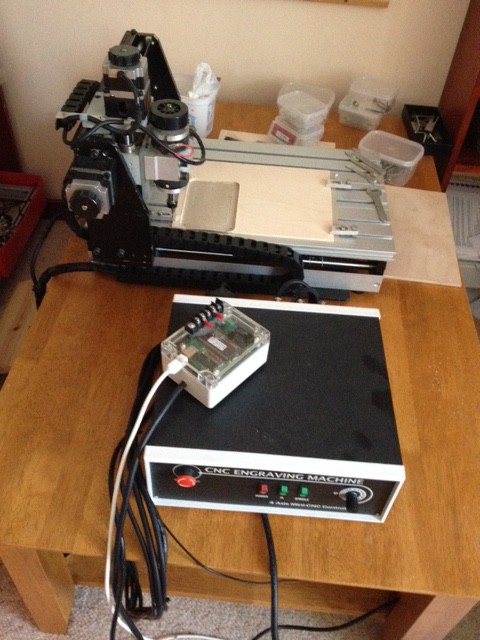 Yes Toshiba TB6560AHC. I don't have the datasheets that I collected to workout the switch settings but here is schematic that looks very familiar: 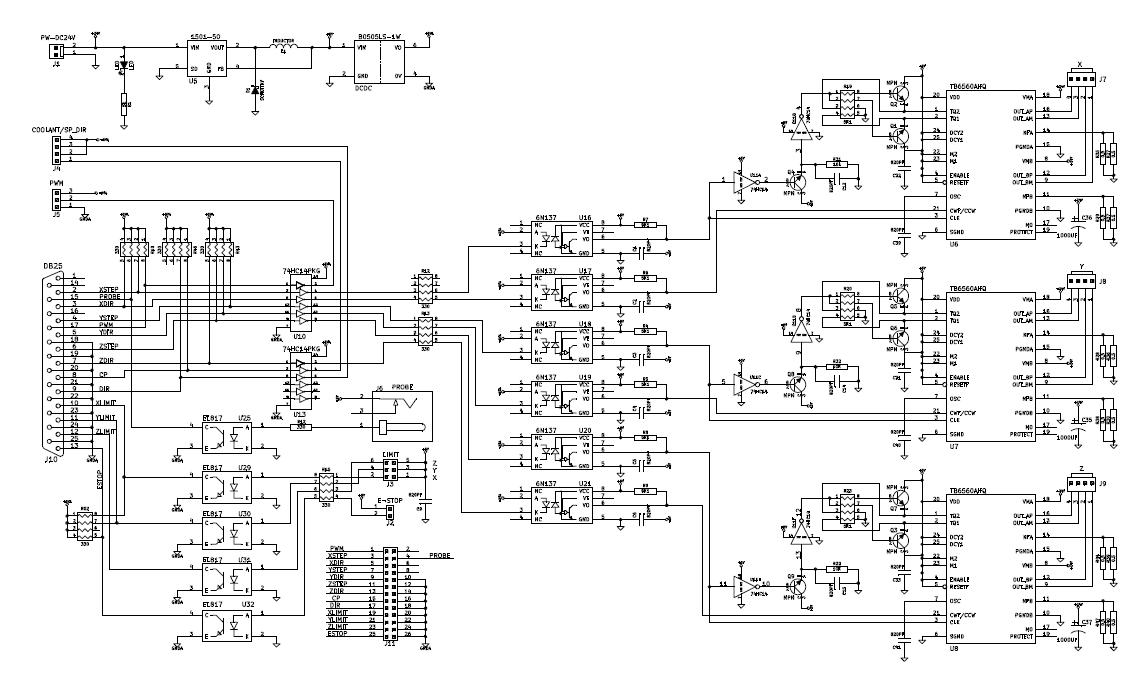 But your board is a much latter version (but the switch setting should be the same!).

Many people have had problems with breaks in the supplied cables. Until you understand how the fault plays out you will think the stepper drivers have an intermittent fault. So be careful. This is a very common problem from my research.

How does it play out! Two hours into a job and the machine loses it! Later it is just erratic.

Pushing the machine by hand does not really tell you about how hard you can push the machine. I think I got more than 1 or 2 mm error pushing my machine hard (as hard as the spindle/steppers would take).

Backlash adjustments don't work well here as the error depends how hard you push the machine.

In the end I had to plan for conventional and climb cuts to compensate depending on whether if is a hole or a cutout.

And you may want to plan for a finishing cut as well.

When cutting aluminium use a one flute bit or it may/will gum up.

It really helps to use a cutting fluid (canola oil is fine) on metal.

Also cut very shallow until you discover the limits of you machine even for wood.

I have cut hardened steel by using canola and very shallow passes, but not recommended

Much of the recommendations on the Internet are for professional machines!

On my machine I cut a rectangle in the bed to show the cutting limits and a second rectangle 10 mm inside that. It makes it easier to align the work piece.

Did I tell you that the bed was not actually level!

Is your unit the same as this?

I've used real machine tools with sub-mil tolerances, and I know not to expect too much from this.  I measured the spindle end play at about 0.15 mm (6 mil) under moderate hand pressure (1-2kg). My main usage case is routing 2mm thick aluminum instrument panels (slowly), plus the occasional odd low-precision metal or ABS part I might need to fab.

Here's a good blog article on cutting aluminum on one of these machines.

I have one of these things but I run a low power (80W) air-cooled spindle.

Most of the cheap laser printers are Nano-Grbl based. That is pretty straight forward swap out.

For my machine I run CNC-USB that drives the parallel port.

The frame is not up to driving it hard. Take it easy or nothing will be true (or even close!).

The cabling is crap and I had to replace mine (in my case it drove the spindle into the bed!).

The steeper drivers are under-heat sinked so driving hard and long in hot conditions will also be a problem. I downed the power setting of the drivers boards and reduced the 1/16 micro stepping (what is the point on a machine like this?) to 1/4 step.

The power supply to the spindle motor is "live" so make sure you unplug the box before doing anything. My soldering iron got a big shock (and the RCD) even though the box switches were off!

I don't recall the stepper motor power requirements but I am tempted to drop the box and use a DRV8825 CNC shield for the Nano. The only reason I have not done this was I don't have a spindle power supply and speed controller (really the spindle is off or flat out!).

Any best of luck, AlanX

Years ago, I converted a Harbor Freight mini mill to a CNC using a CNCFusion kit and stepper controllers from HobbyCNC. Time to fix it!
Project Owner Contributor

This is an attempt at a cheap but rigid CNC machine (budget approx. 2000€)
Project Owner Contributor

Refactoring the SMT50 to work with OpenPnP
Project Owner Contributor