After the first attempt at coupling the gears to a shaft i realized that trying to use threaded rod as shafts was not going to work, even if i tried to key them or improvise a spline on them.

I came up with the idea of using hex bars as shafts, and instead of mating them to a very precise hexagonal hole, i could design a part that would clamp on them and then screw to the gears.

What you can see below is the previous design compared to what i made with this idea. 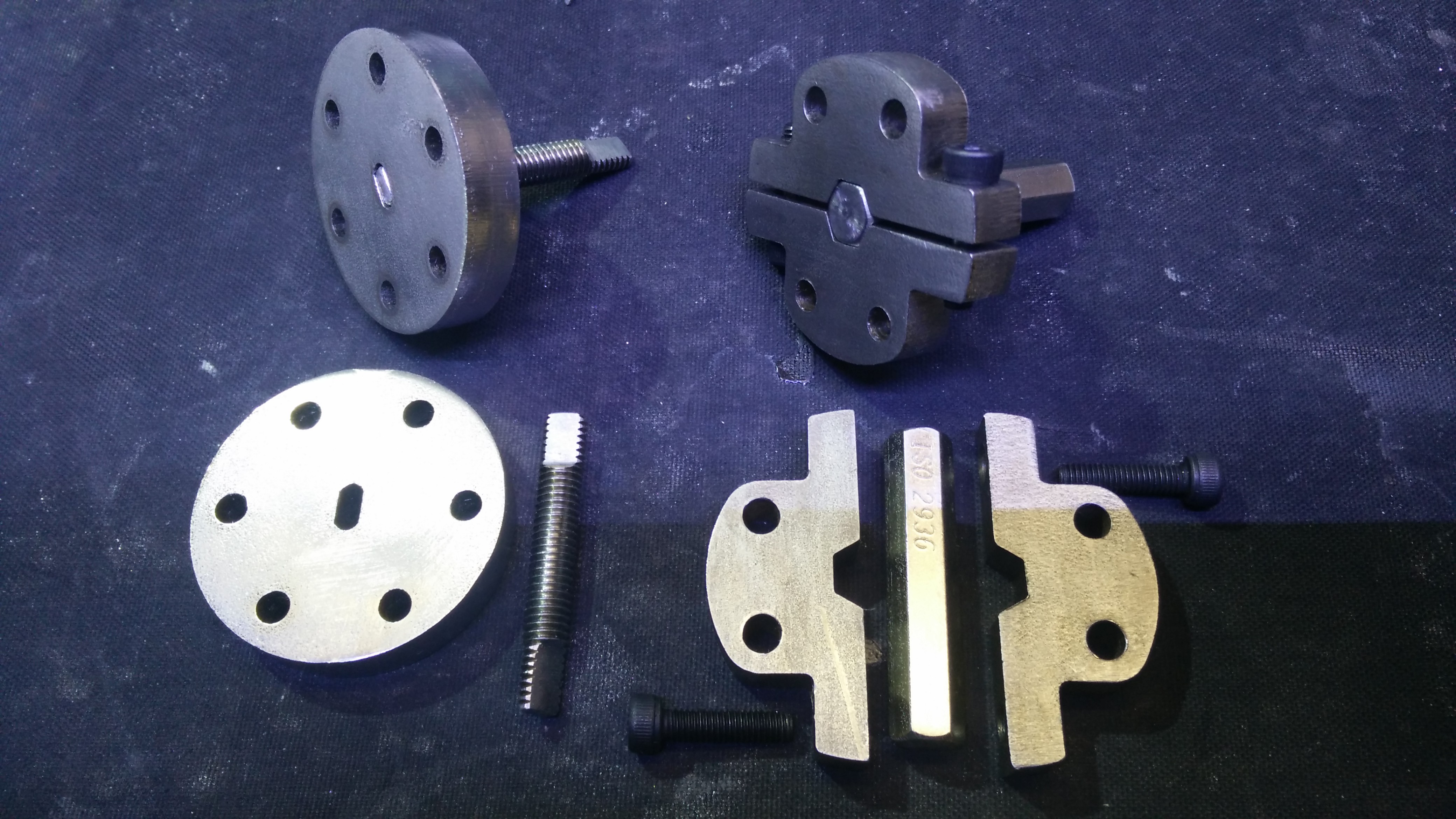 (I've included the parts as "8mm stainless parts.dxf") In the file there are four larger clamp halves that i plan on using for the motors, but won't do so until later in the build.

I ordered the necessary parts to be laser cut out of 8mm stainless steel. 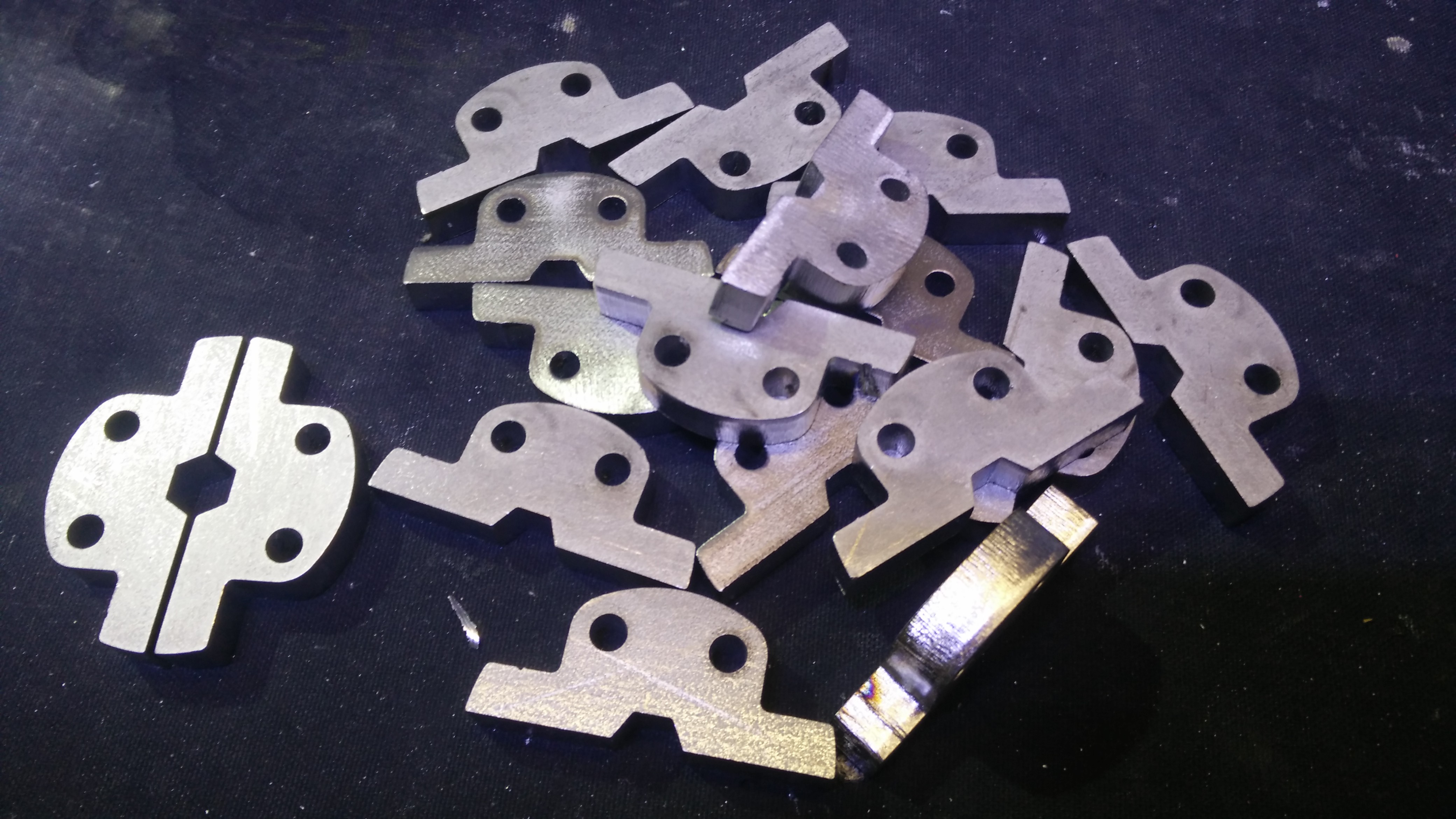 For the hex shafts, i decided to use allen wrenches. I bought a couple of 8mm wrenches and cut the four 40mm pieces that are needed for this robot. I would recommend using an abrasive cutoff disc, as the steel in this wrenches is hardened and would easily dull a saw. 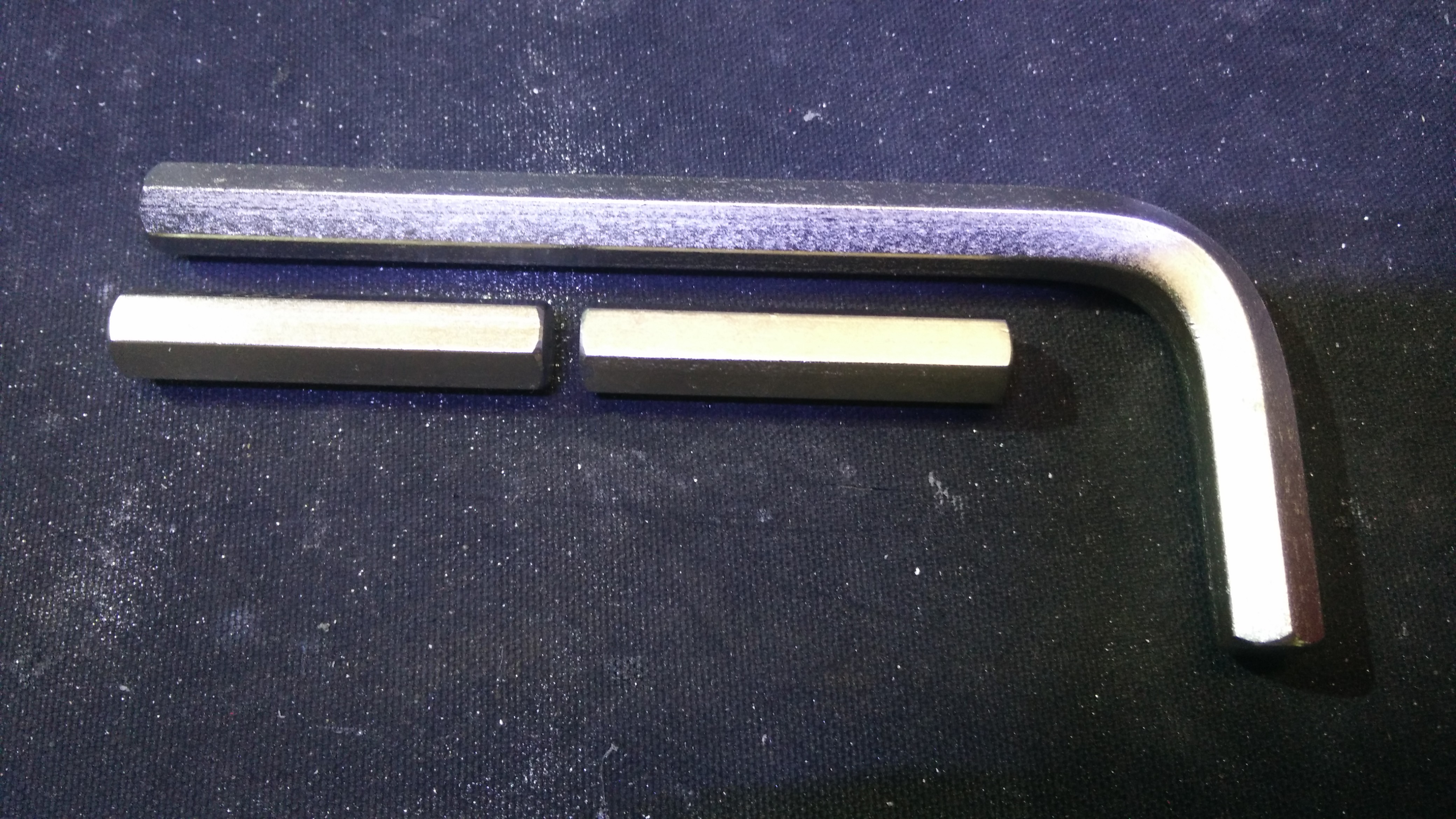 The shafts fit nicely between the halves, which will be screwed to the gears through the holes that match four of the six that i've already threaded into the aluminium parts. 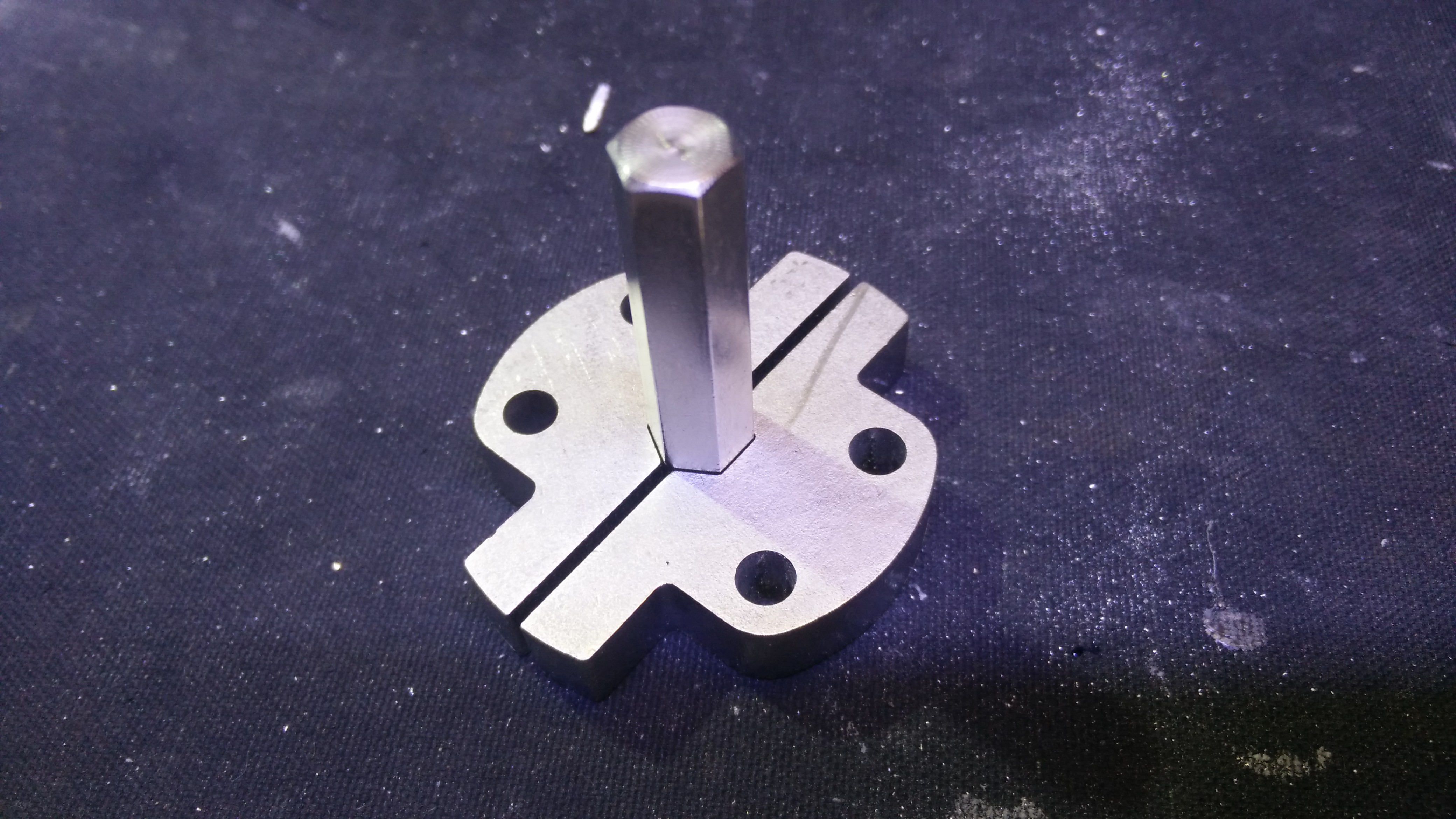 All the halves were drilled 3.3mm and threaded M4 on one side, and drilled 4.5mm on the other so the screws would fit through easily. Be careful wen treading stainless steel, as it's very hard even with good quality taps. 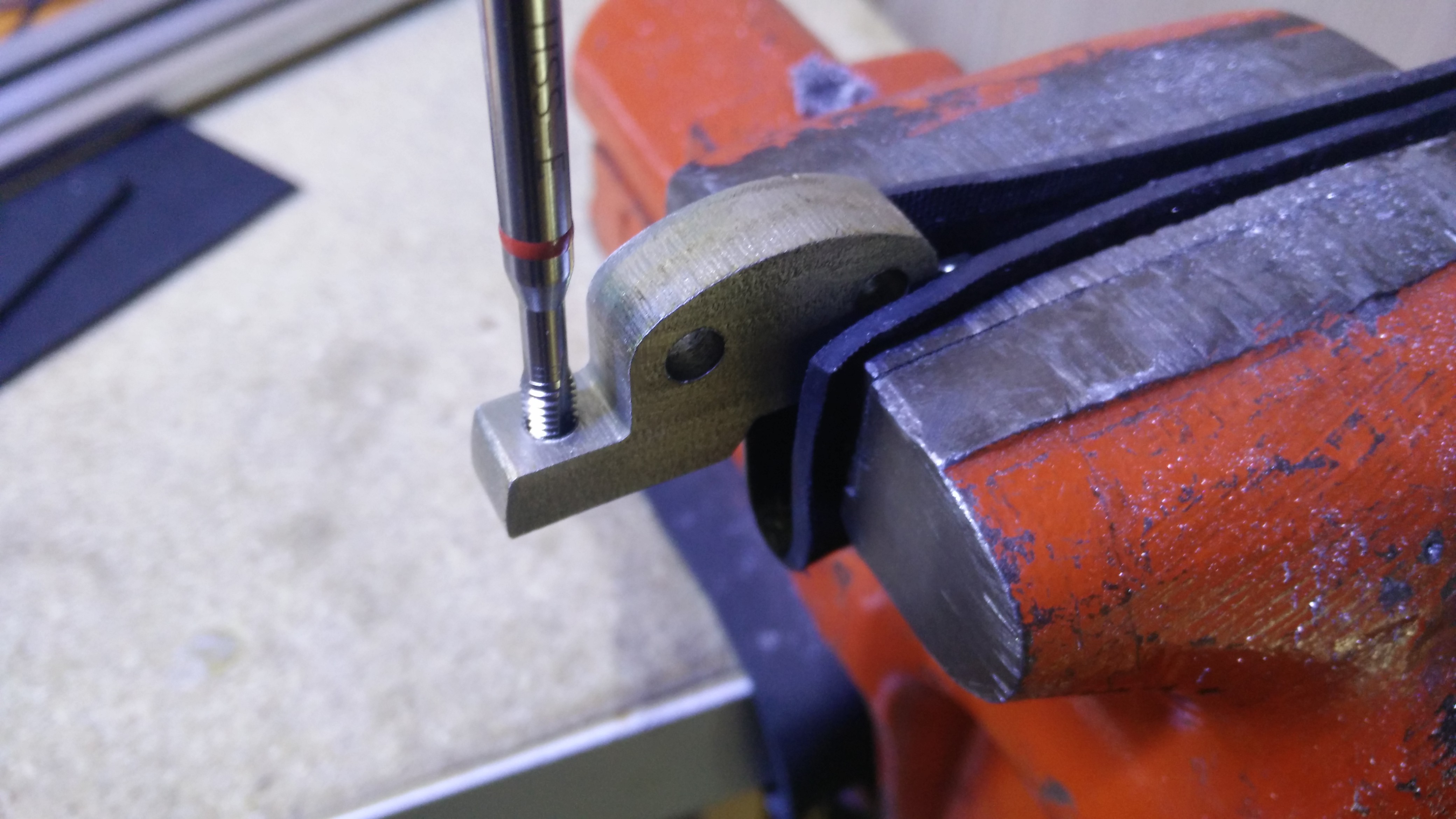 With M4 x 16mm screws the halves are clamped onto the hex shaft.

A couple of thing i want to point out about the fasteners:

While you see me using button head screws, i later changed to full socket head because for the same thread size, they use a larger key and so they are less prone to be damaged and rounded when tightening them.

Also, you may know that stainless on stainless threads are prone to galling, and generally are to be avoided, but i'm using that to my advantage. As this parts will probably be subjected to a lot of vibration, it helps if they lock automatically without the use of any adhesive that would need to be replaced. 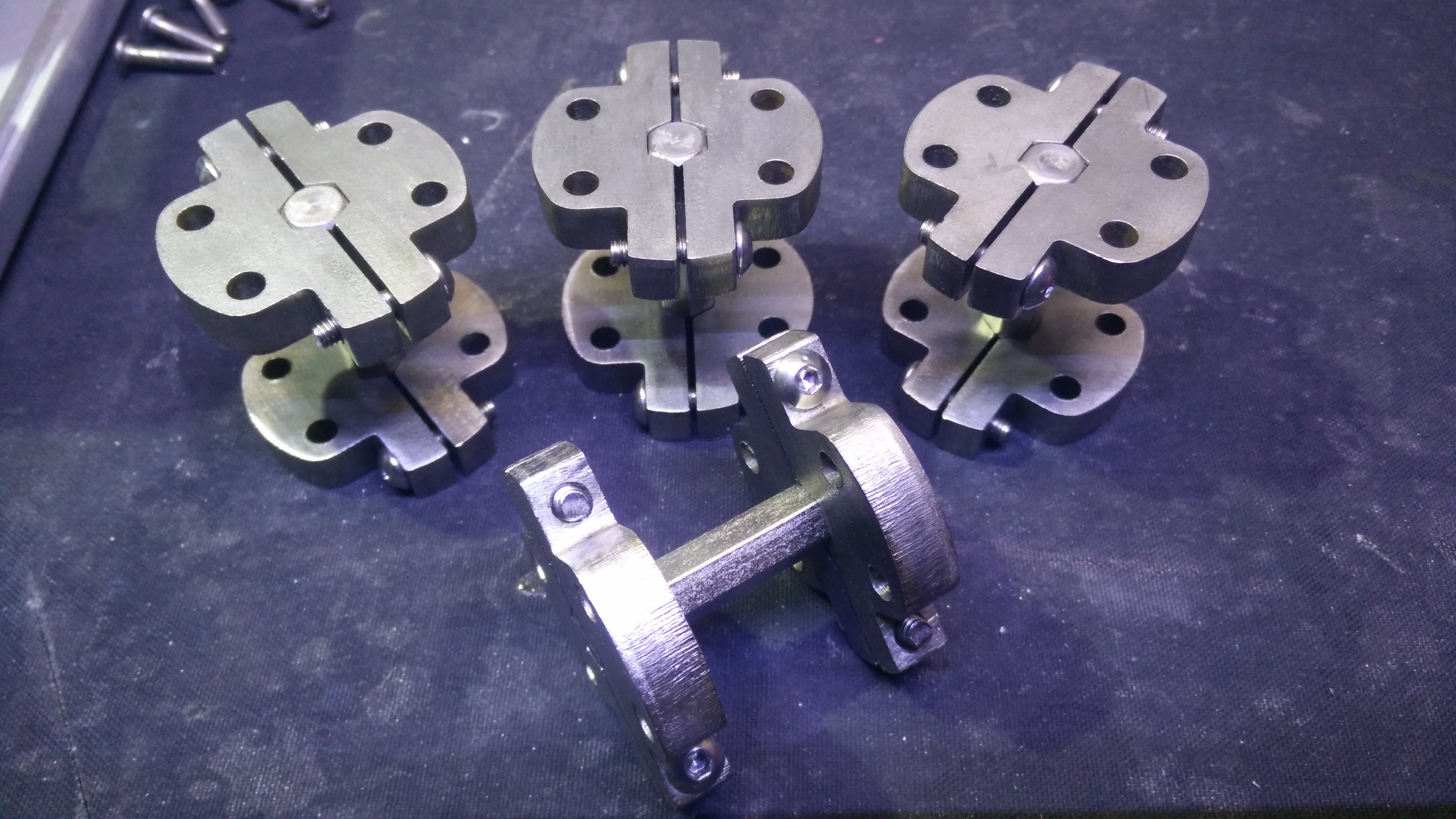 I then countersunk the holes so the assembly could be kept as low profile as possible. Once all the parts were done, i started the assembly of a wheel pair by tightening the M6 x 35mm button head bolts that will act as crank pivots for the leg linkages. Then i used M4 x 12mm countersunk screws to screw the clamp halves onto the aluminium parts, holding them in place.

The hex shaft was put trough one of the wheels and the clamps tightened onto it, then i tighten the countersunk screws down. 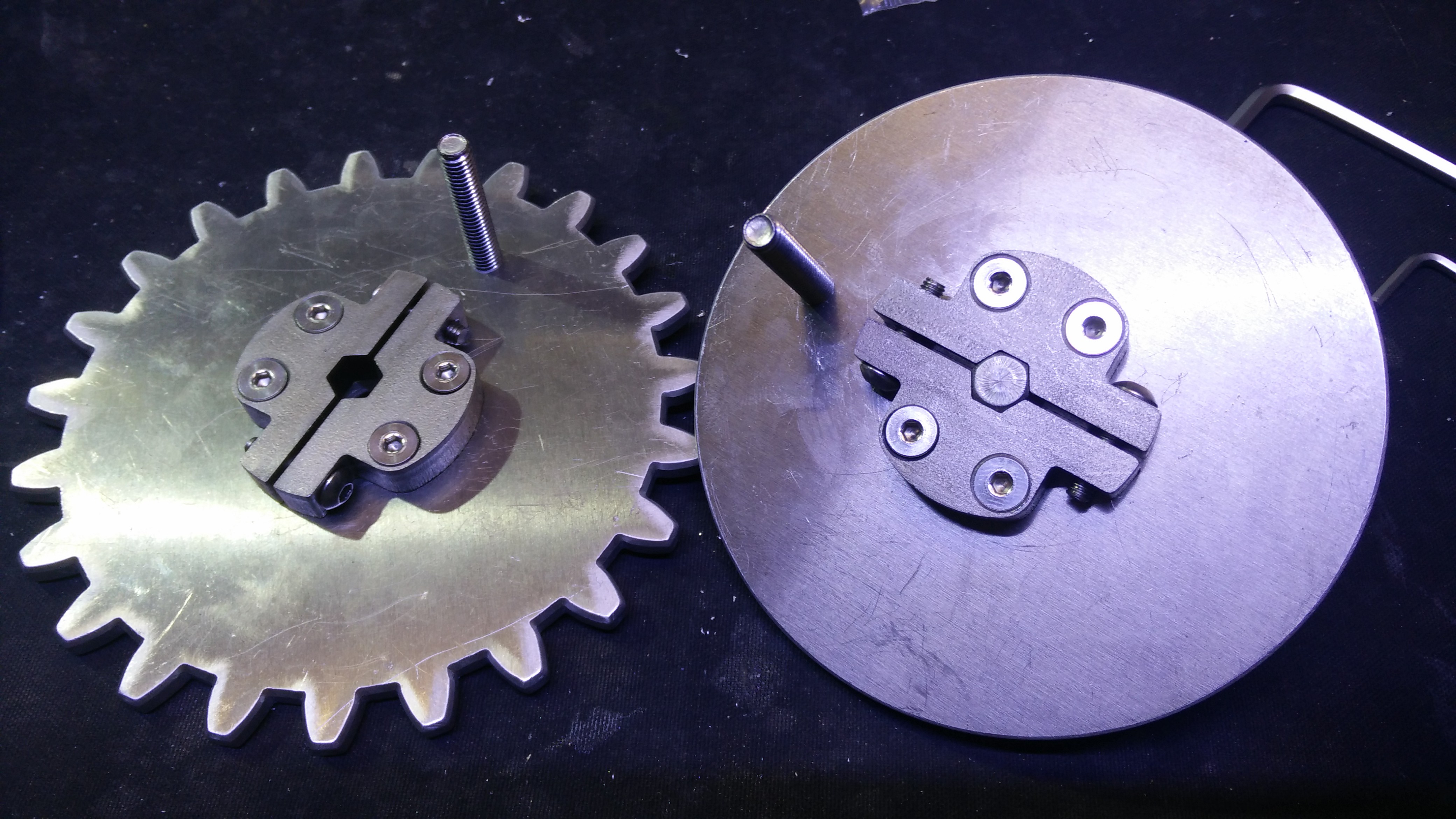 In the same way as in all other joints, i'm using thrust roller bearings between the wheels and the frame. This ones are AXK 1024, as the 10mm internal diameter leaves just enough room for an 8mm hexagon to pass through.

The bearings were packed with grease too. 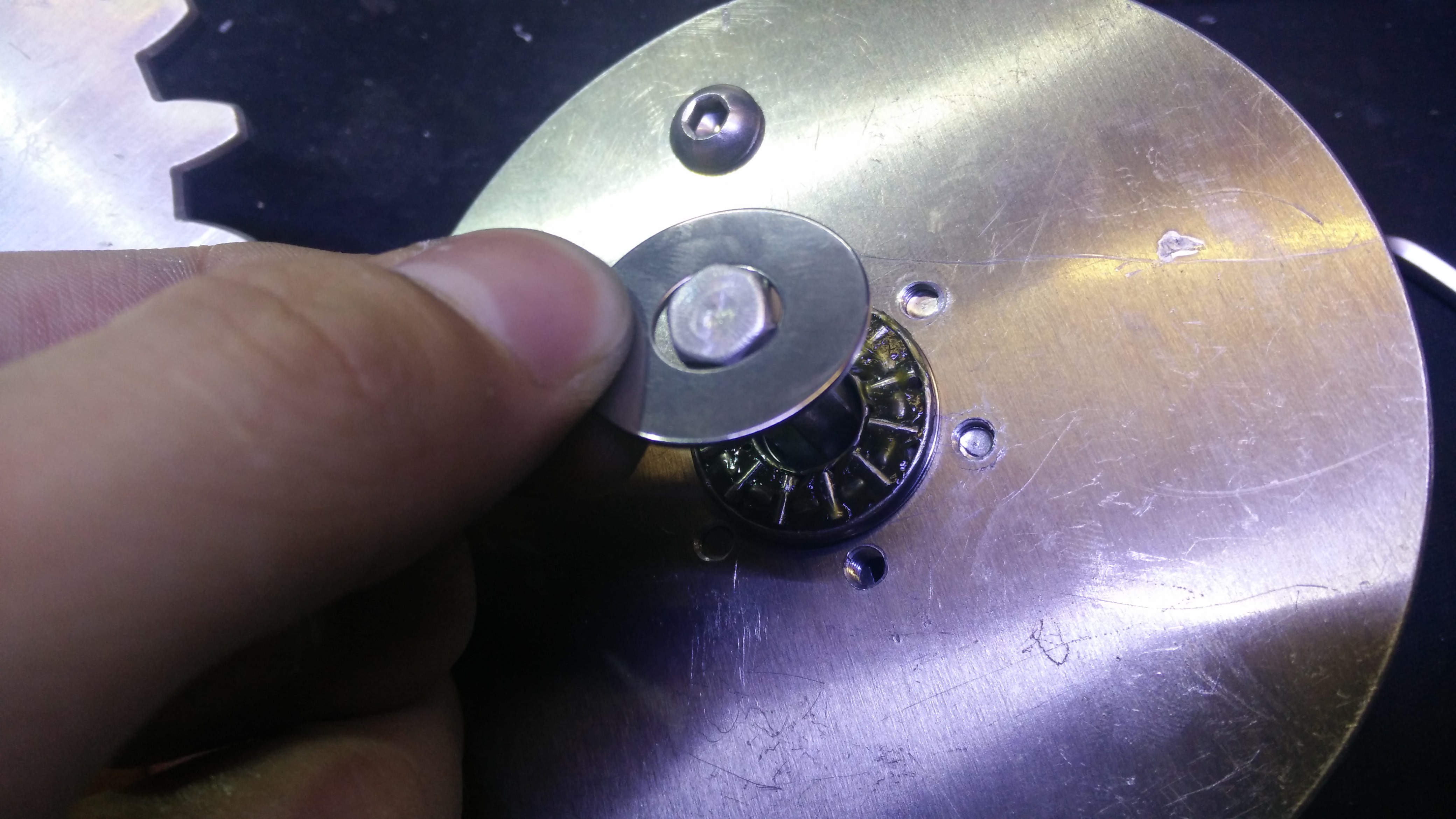 Grease coated o-rings are used here as well, to keep dirt and water out of the bearings. This ones are 4mm thick (as the bearings) and 24mm in internal diameter. The assembled half is put though the 10mm hole in the frame after greasing the hex shaft, and another bearing and o-ring is placed on the other side. 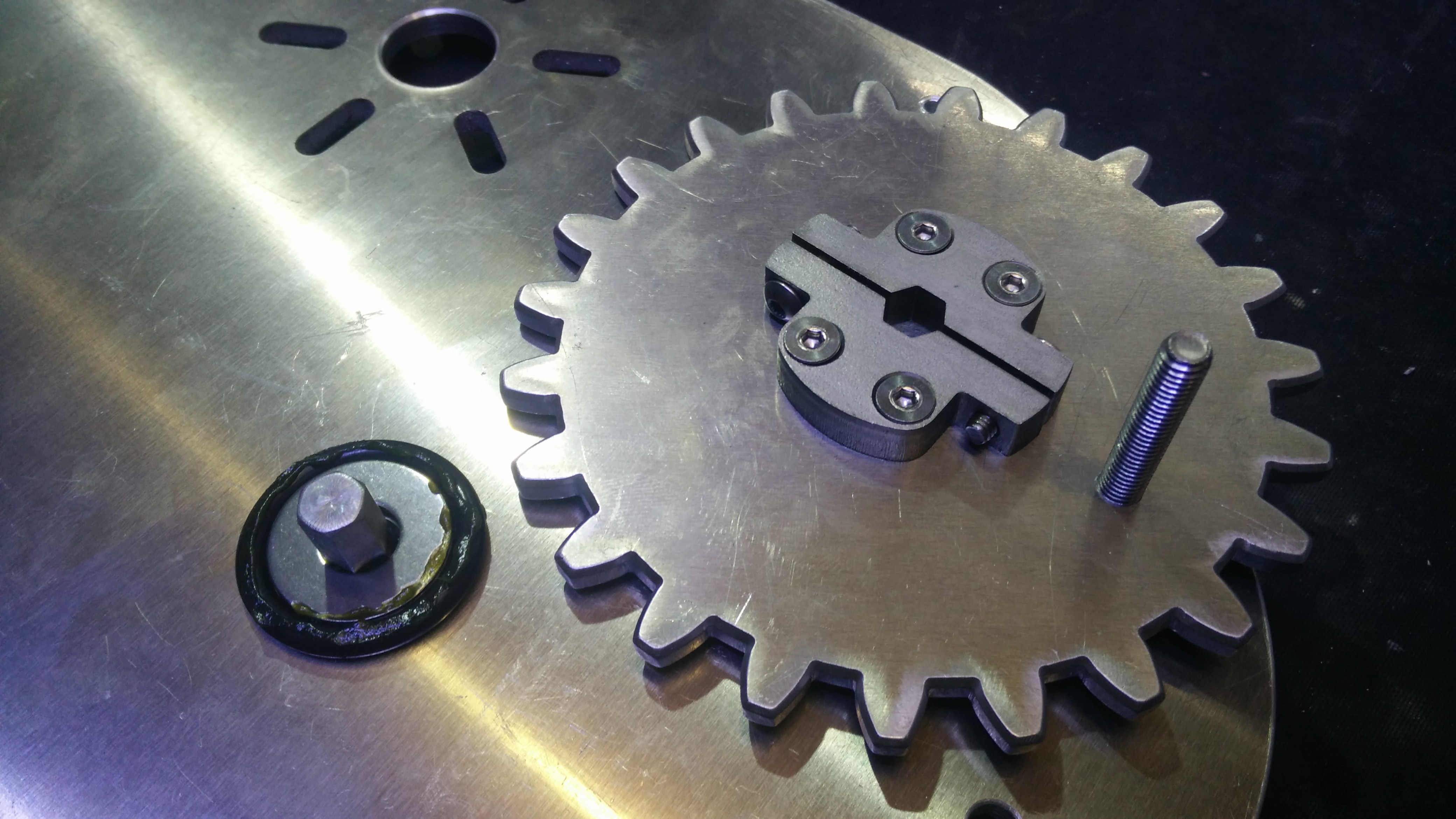 The other half (the gear in this case) is placed on the shaft, but making sure that the protruding bolt is on the opposite side of the one on the wheel.

Before tightening any screws, the two halves are pushed together with the help of something like bar clamps. The assembly is clamped tight and all the screws tightened all the way, making sure that there will be no slack when the bar clamps are released and the bearings are free to rotate with little resistance. 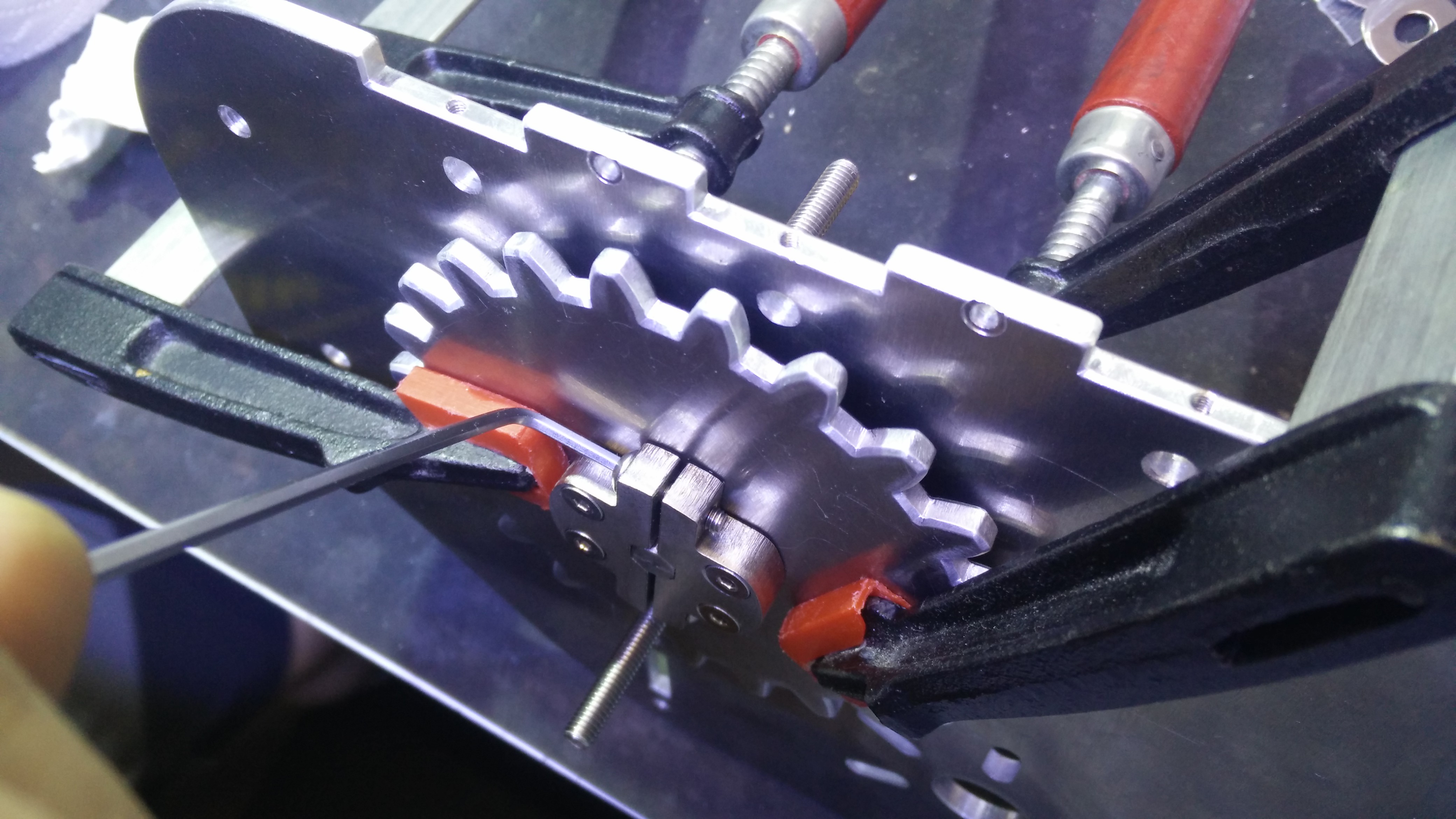 After it's done, the assembly looks like this from the side: The process is repeated another three times for the remaining wheels and gears. And this is how they look on the frame plates: 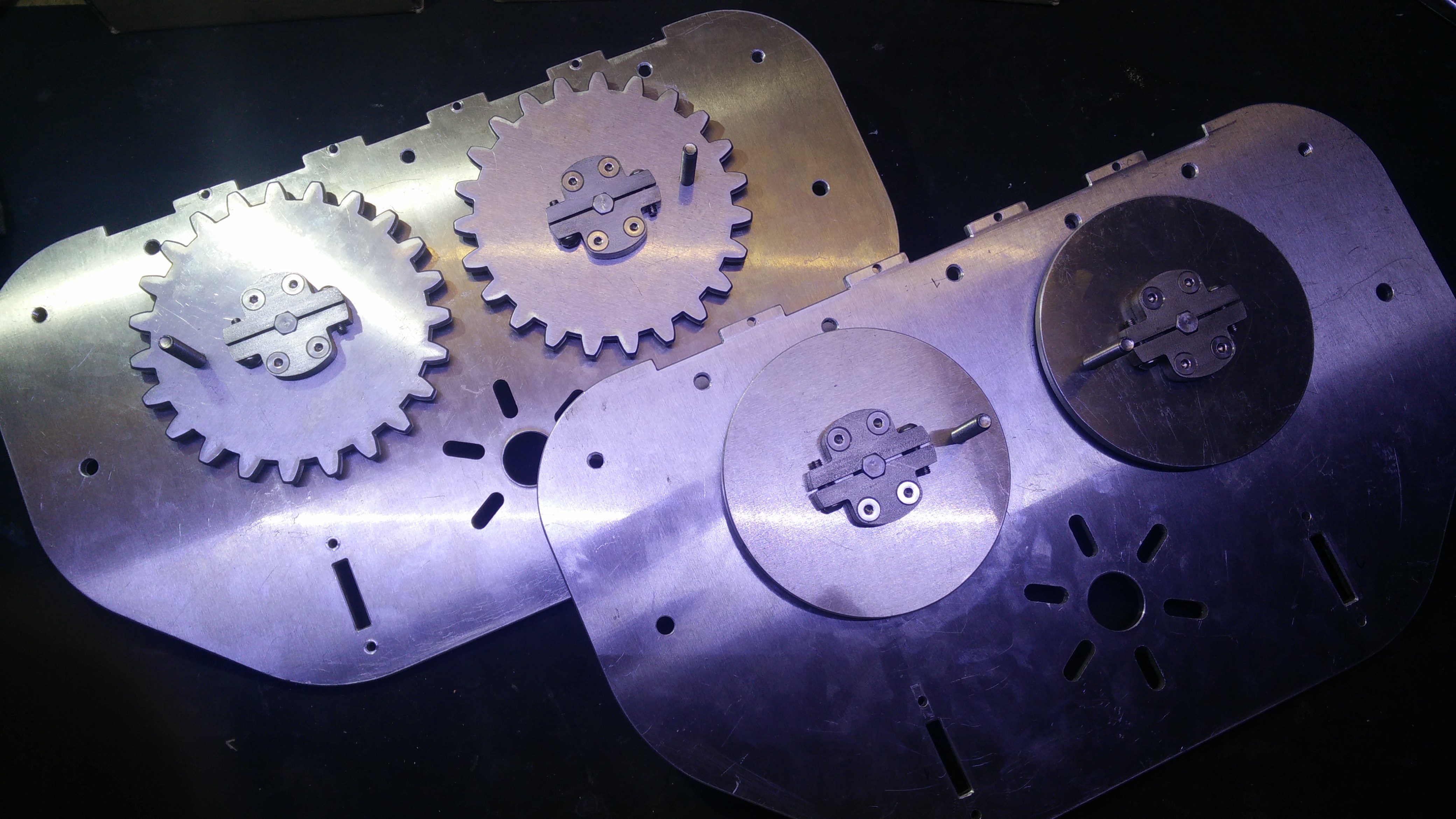 Some time after having assembled the wheels, i thought of a modification that would improve the mechanism durability.

Having a hexagonal steel shaft rotating inside an aluminium hole will wear down the aluminium over time. Having greased them thoroughly might improve the situation, and would probably suffice for this case.

But knowing i could do better, i couldn't resist upgrading it.

I dismantled everything just enough to extract the shafts, i turned down (in a drill press) the center part down to 8mm in diameter leaving a smooth surface finish. Then i cut a brass tube (8mm inner and 10mm outer diameters) into 5mm pieces which were then split in halves. When greased and put together on the turned part, they make for pretty good bushings, which will endure for much longer than the aluminium against the hexagonal shaft. 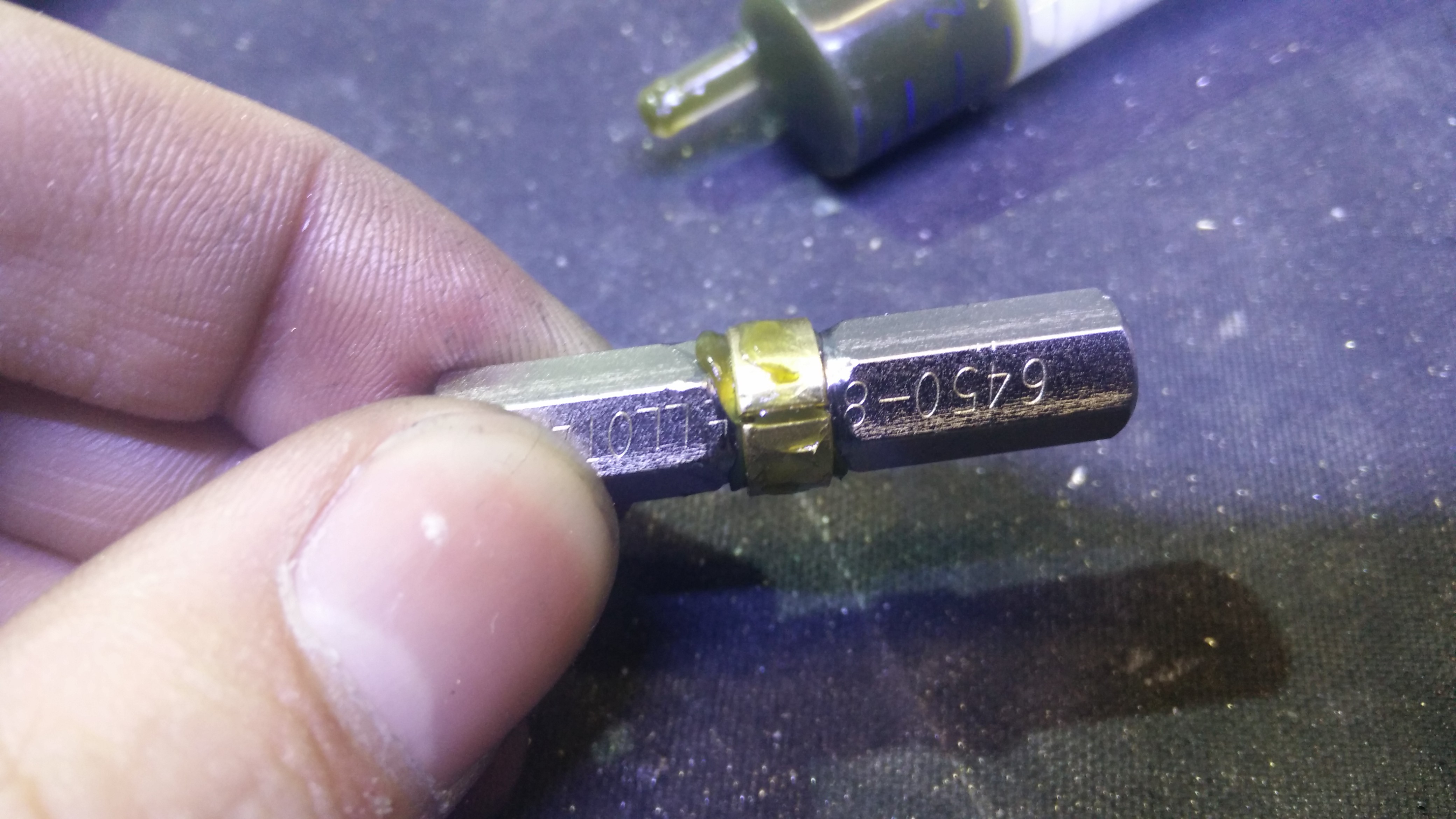 As the outer diameter is the same as that the aluminium holes, the bushings fit in place perfectly.

For this upgrade using bronze instead of brass would have been the optimal choice, but i didn't have any available and i'm pretty sure that brass will perform more than good enough for my purposes. 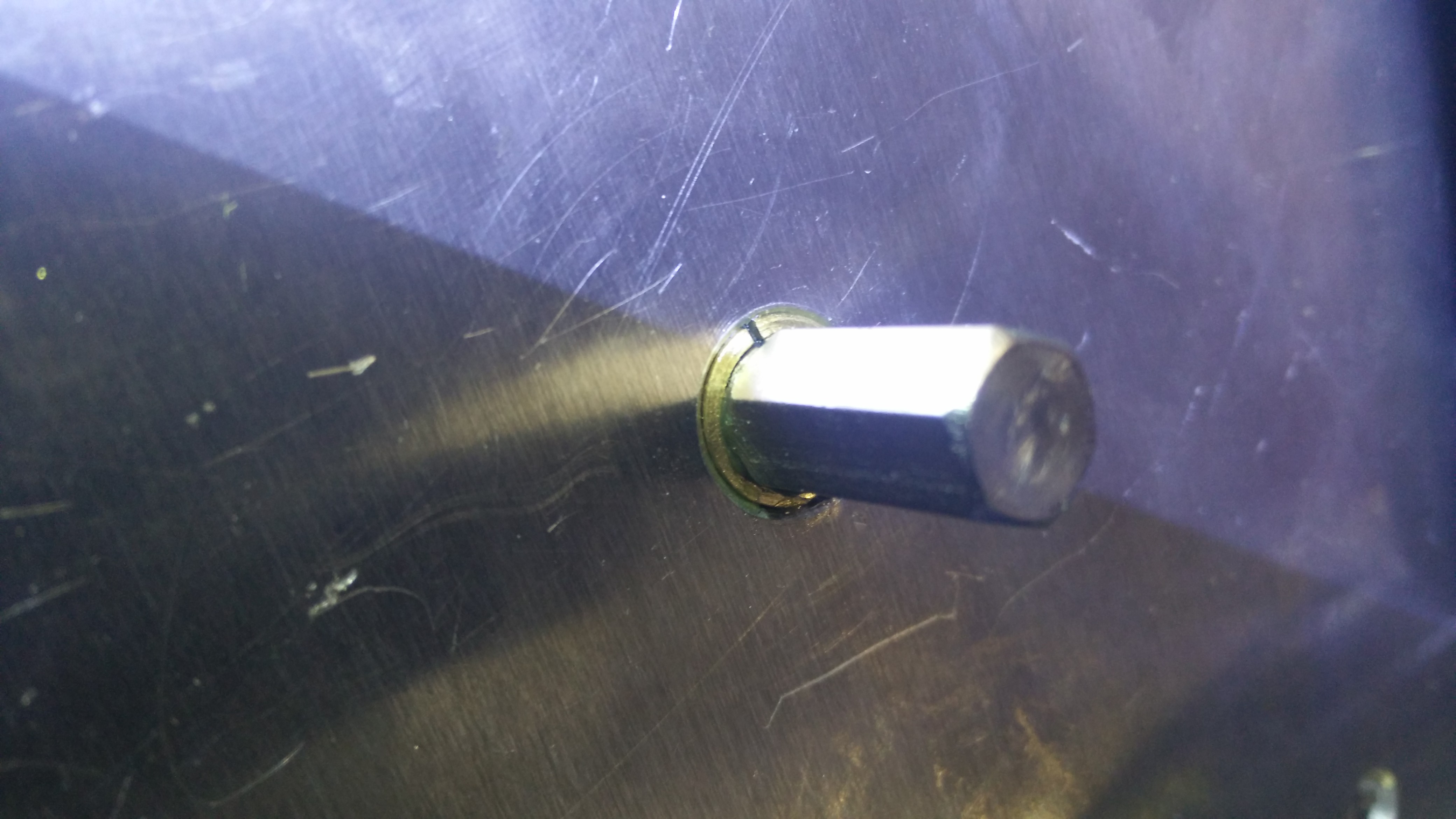 After all the shafts and bushings were done and installed, i assembled the wheels again as i've shown before, and then put the frame back together (now using the M3 x 12mm button head screws that don't protrude as much). Putting the mechanism together