How to control a clownfish with brain waves, bicep muscles, a hacked remote, an Arduino and an OpenBCI Ganglion board

This project was forked / inspired from a flying shark controlled by 5 guys using an OpenBCI Cython board (blog post posted in the details); this is a flying clown fish controlled by one EEG electrode attached to position Oz where the alpha wave indicated forward motion and two EMG electrodes attached to the right and left bicep for "diving" and "climbing."

This project was used as a hack / practice project where I used the remote from Air Swimmers ("Rick's central nervous system"), an Arduino, Processing IDE, an OpenBCI Ganglion board and the open sourced OpenBCI GUI.

I soldered Arduino wires to the remote, reused the code the "shark flying guys" used for basic commands (left, right, down and up), and then modified the OpenBCI GUI code to recognize the EEG and EMG signals and then hooked it all up!

Note: Original blog post here where you will find most of the code and another set of directions to do the following steps. Have fun!

With a couple clicks, Rick the clownfish was at my doorstep in about 24 hours which is fricken' amazing.

I unpacked him in a hurry and took him to the nearest balloon shop. I learned even though helium is the second most common element in the Universe, it's incredibly rare on Earth and is in fact mined underground!

Anyways, somehow I ended up paying $2 dollars to fill a giant clownfish and this is how Rick became the largest clownfish ever to set foot in my room.

It took about 30 minutes to assemble Rick with fins and all. Truthfully, he's well thought out when it comes to left and right thrust, as well as upward and downward motion - definitely still impressed.

Ya gotta love that smile... Good looking clownfish I do say so myself. As much as I'd like to sit down and hammer out this project in a day, I had to break everything down into small steps.

Thus, welcome to day two where we will understand how Rick moves and then solder our way into controlling his every move.

Step one. Cracking into his nervous system. Rick wasn't too pleased with this step so I had to tie him to a shoe on the other side of the room. 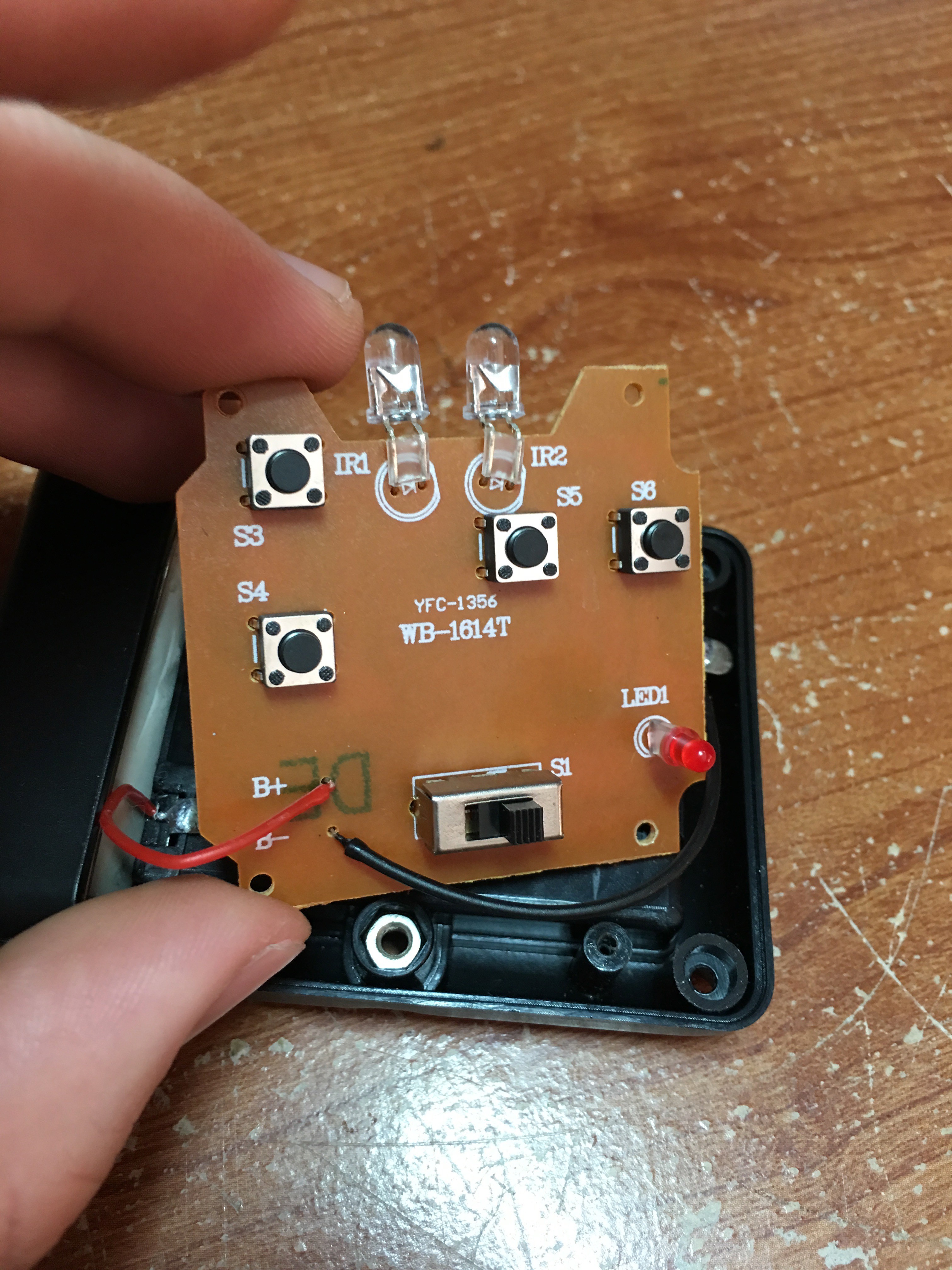 We have here a simple board with push buttons wired to pull one side of a switch down to ground whenever pushed.

What we are going to do is solder wires from an Arduino kit to each switch (right, left, up and down).

This will allow our lovely Arduino board to act like a button and pull a switch to ground on command. As a result, we'll be able to send commands to Rick! Rick's still tied to a shoe - he hates it. 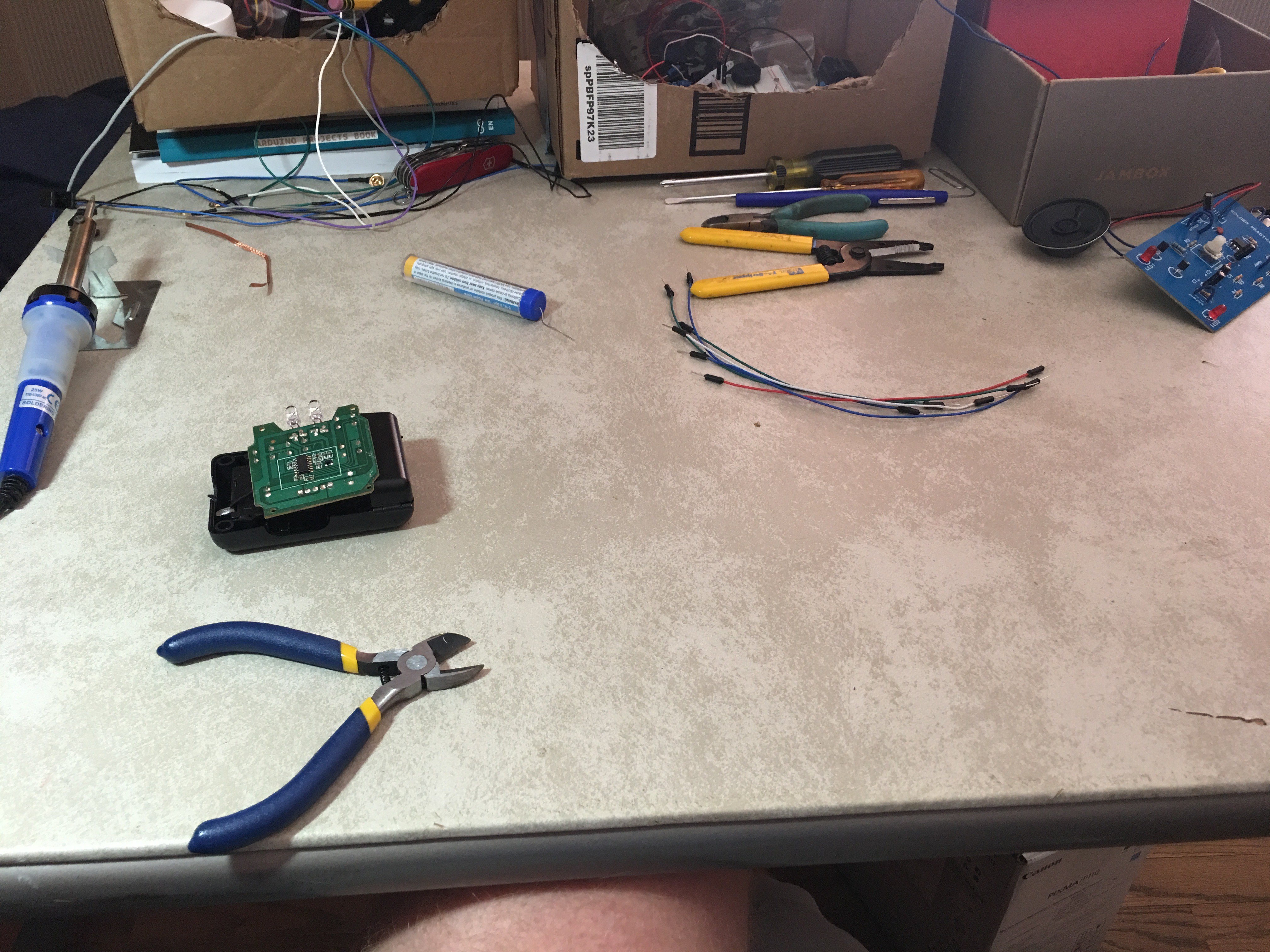 We're going to need some supplies: a soldering iron, solder wick for mistakes, lead free solder for more mistakes and I'm using some wires that came with my Arduino kit. I use a clip to hold the board too, not necessary. 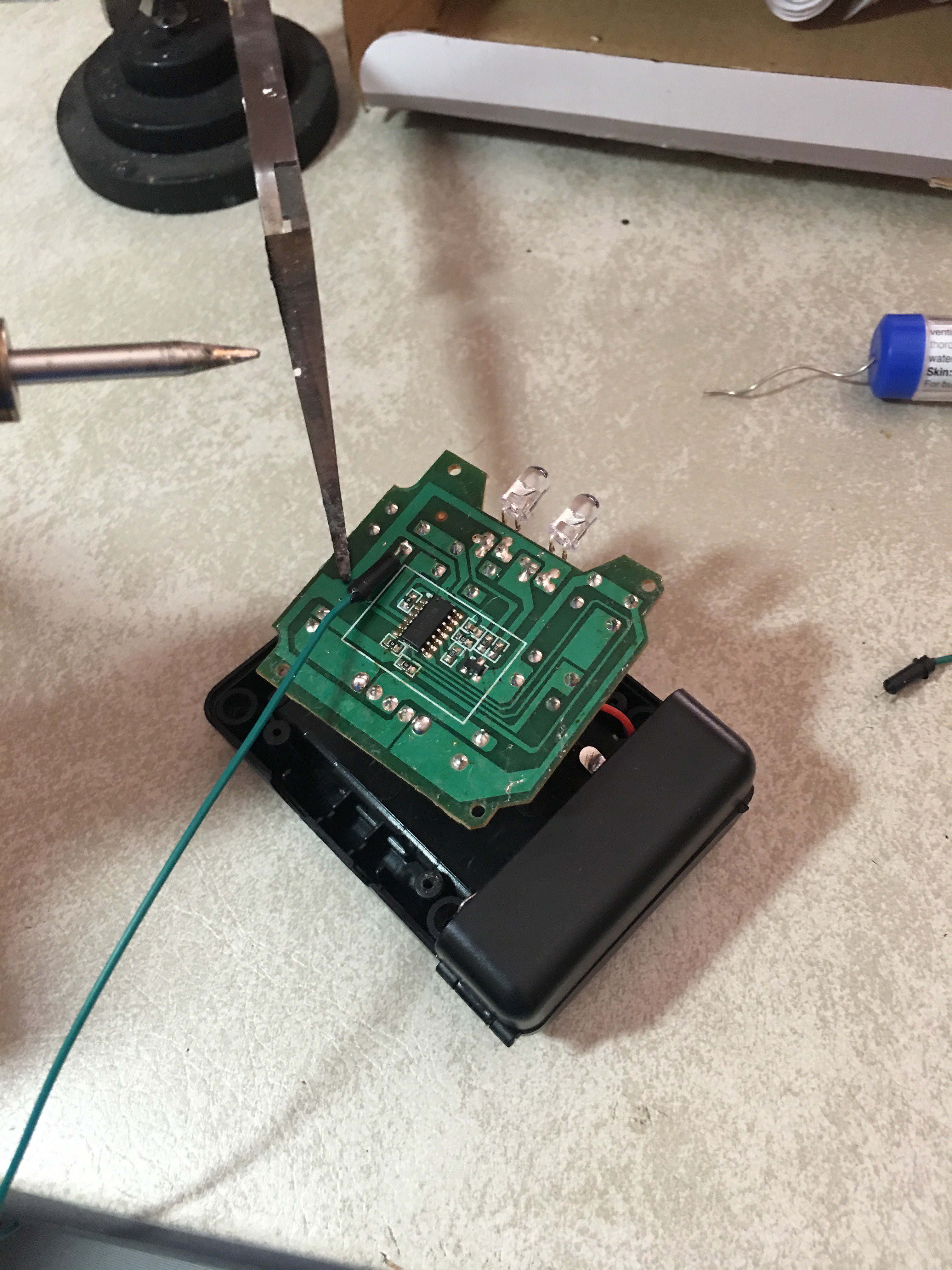 Looking good so far. We've successful avoided any burns and made a good solder to the "right" switch.

Oh, did you remove the batteries? Yeah... Let's go ahead and do that right now. Safety glasses? Yeah... Mmmk. Back to work. 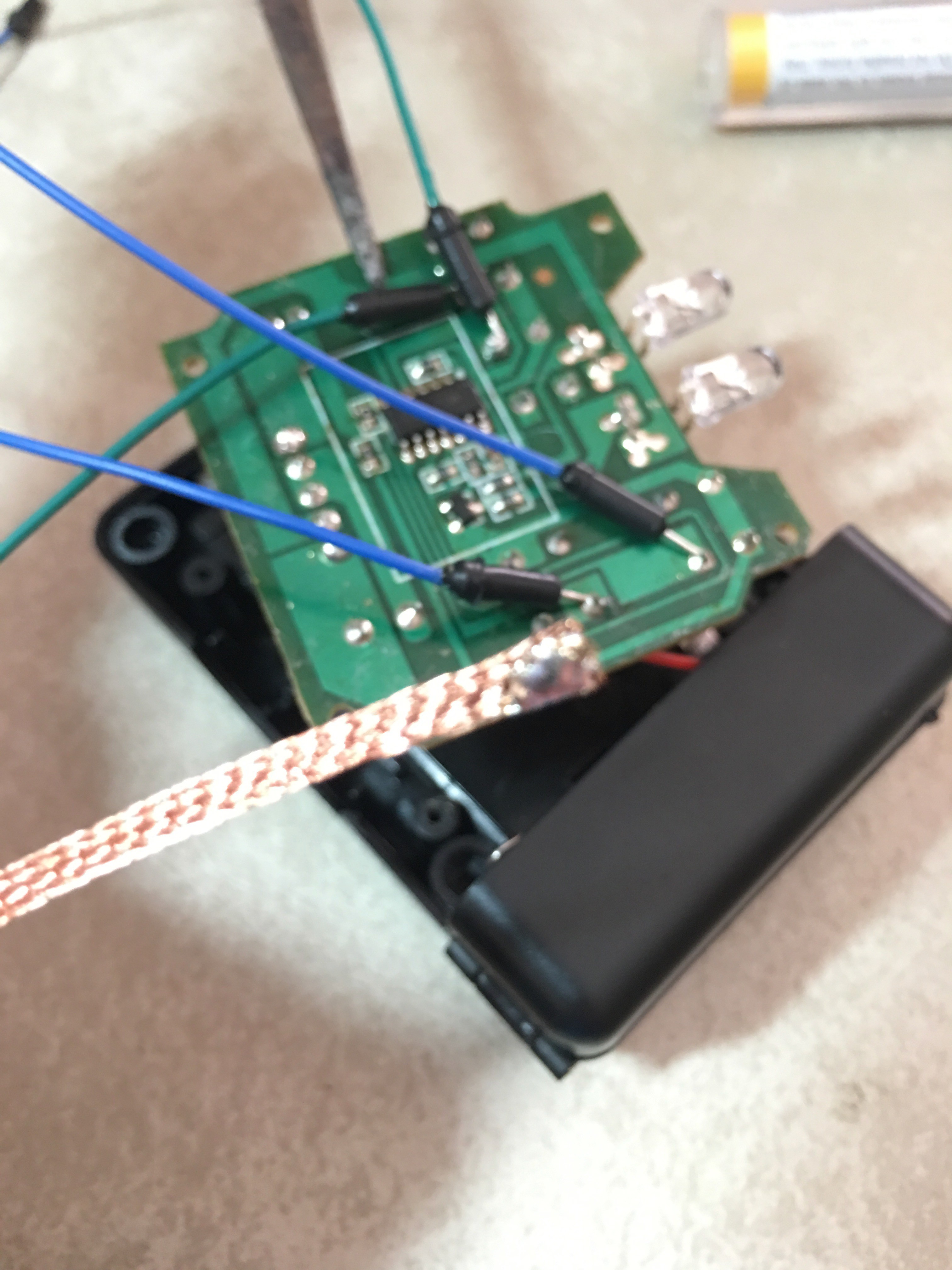 And.... that ladies and gentlemen is a mistake. This is why we have solder wick. Looking good so far though! I think... I'm not a soldering expert but I'm pleased. Yah love to see it! Ignore that green wire that I may or may not have touched with the soldering iron..

Rick's also still tied to the shoe and he let one out as a joke when I was on the phone, not cool as that's rare element! Here's Rick's entire nervous system hooked up to digital pins 13 through 10 on our Arduino to run fun things like digitalRead( ) and digitalWrite( ). Lastly, we have the ground hooked up to analog in A1 where we can run analogRead( ).

That's it for today!

Okay, Rick's still tied to a shoe and we have successfully soldered his nervous system to some wires. Let's test this out, but first, let's go over the 10k overview here.

The goal is to first upload the Arduino code to our Arduino UNO, which will open a serial port so our OpenBCI code can communicate seamlessly with our Arduino. So in short, when a certain threshold happens on the EEG or EMG, we will send a command to our Arduino which will ground that command on our remote and in turn send the signal to Rick, hey Rick. 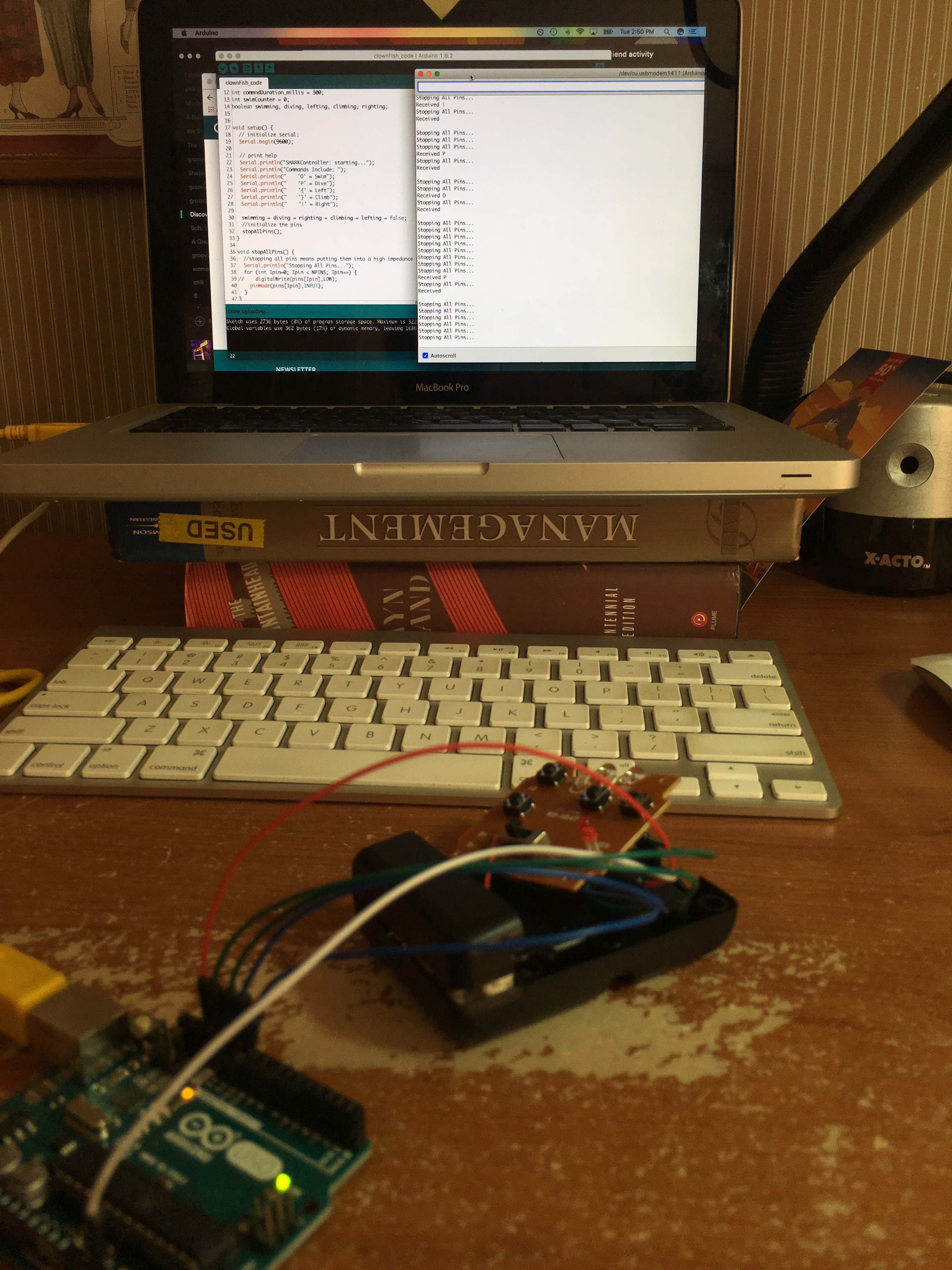 Shout out to my used Management book - what a waste of money. Okay. Let's test Rick!

Nice, we can send a command from the computer to the Arduino which sends the appropriate command to Rick, and all without Rick's consent! This is cool. See code here.

Next up is coding some OpenBCI GUI magic and seeing what we can hack together here. 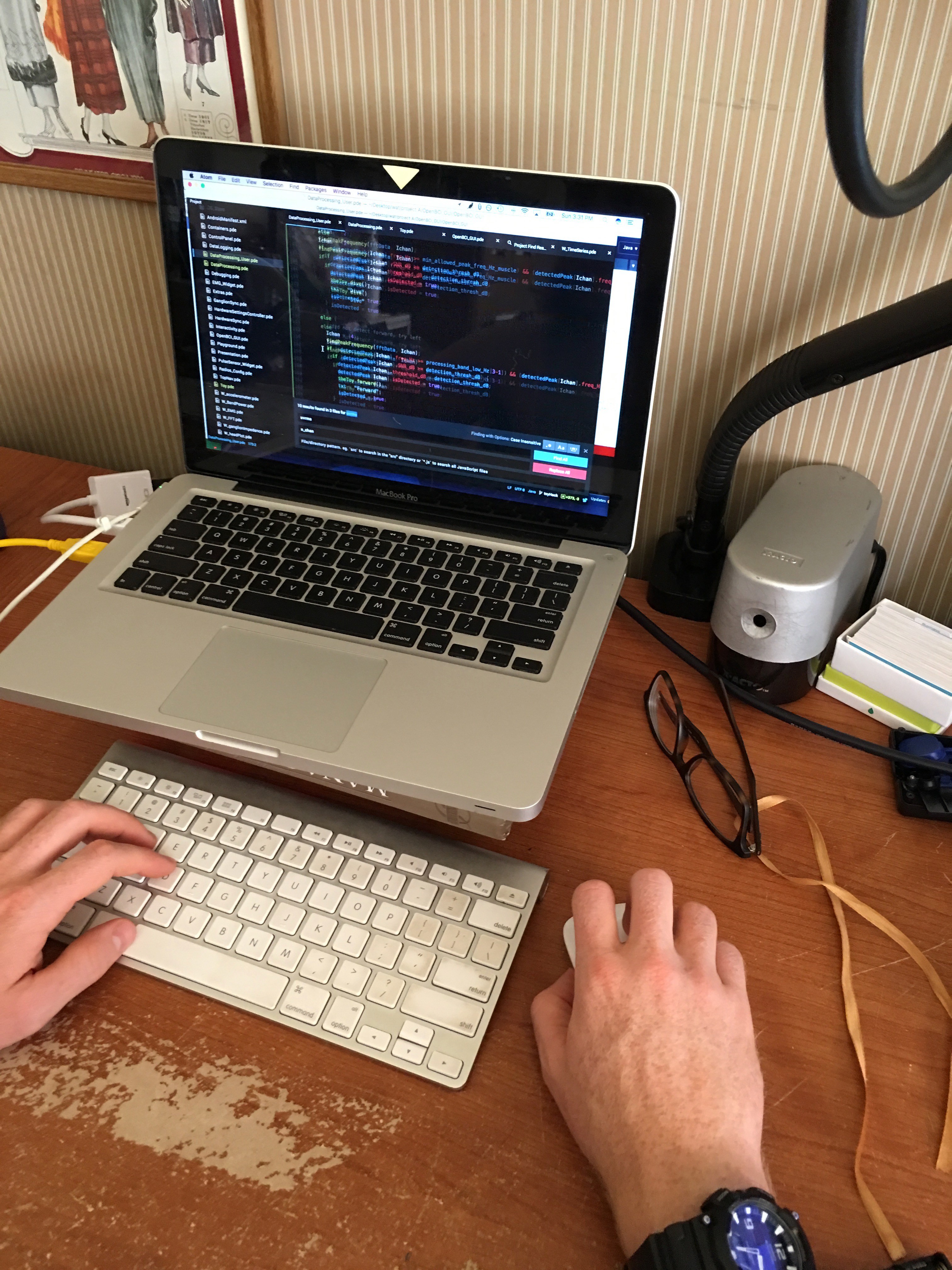 (a lot of hours pass and Rick is starting to grow fond of his shoe, I mean anchor)

Okay, so this process ended up taking much longer than...

This is fun and impresive, thank you for sharing! =)

Everyone's doing it to their cars... so I want to do it with bikes!
Project Owner Contributor

The 2018 Hackaday Prize
The theme of this project is to detect objects in space or ground for surveillance purposes.
Project Owner Contributor

Made a Radar Station by Using Arduino | DIY

Creating interesting graphics on a strand of RGB LEDs using an ATtiny13, with just 64 bytes of RAM and just 1K of flash.
Project Owner Contributor

Holiday Blinkenlights in 1K for about a buck