I always wanted a Commodore 1541 drive, even if now I have an sd card replacement driver for my Commodore 64.

The 1541 is the representation of what Commodore itself was, a pure materialization of what made them , eventually, fail in the computer industry but yet be a fundamental part of that history.

The 1541 was over engineered , the desing was flawed due to Marketing rushing R&D and Expensive , on top of that , it was heavy and the heat generated by the cheap linear power supply was the cause of many hardware failures and a short life.

I thought to restore it to his original state but due to it's design flaws I chose to upgrade the whole PSU to something more modern.

First , we have to check how extensive is the damage.

The 200v 1A fuse is blown, the diode bridges are in short circuit . According to the schematics :

My multimeter says that there are no shorts between ground and 12/5v so , ideally , if I feed the regulators with 19v dc for a small amount of time I should be able at least to check if the rest of the drive works: 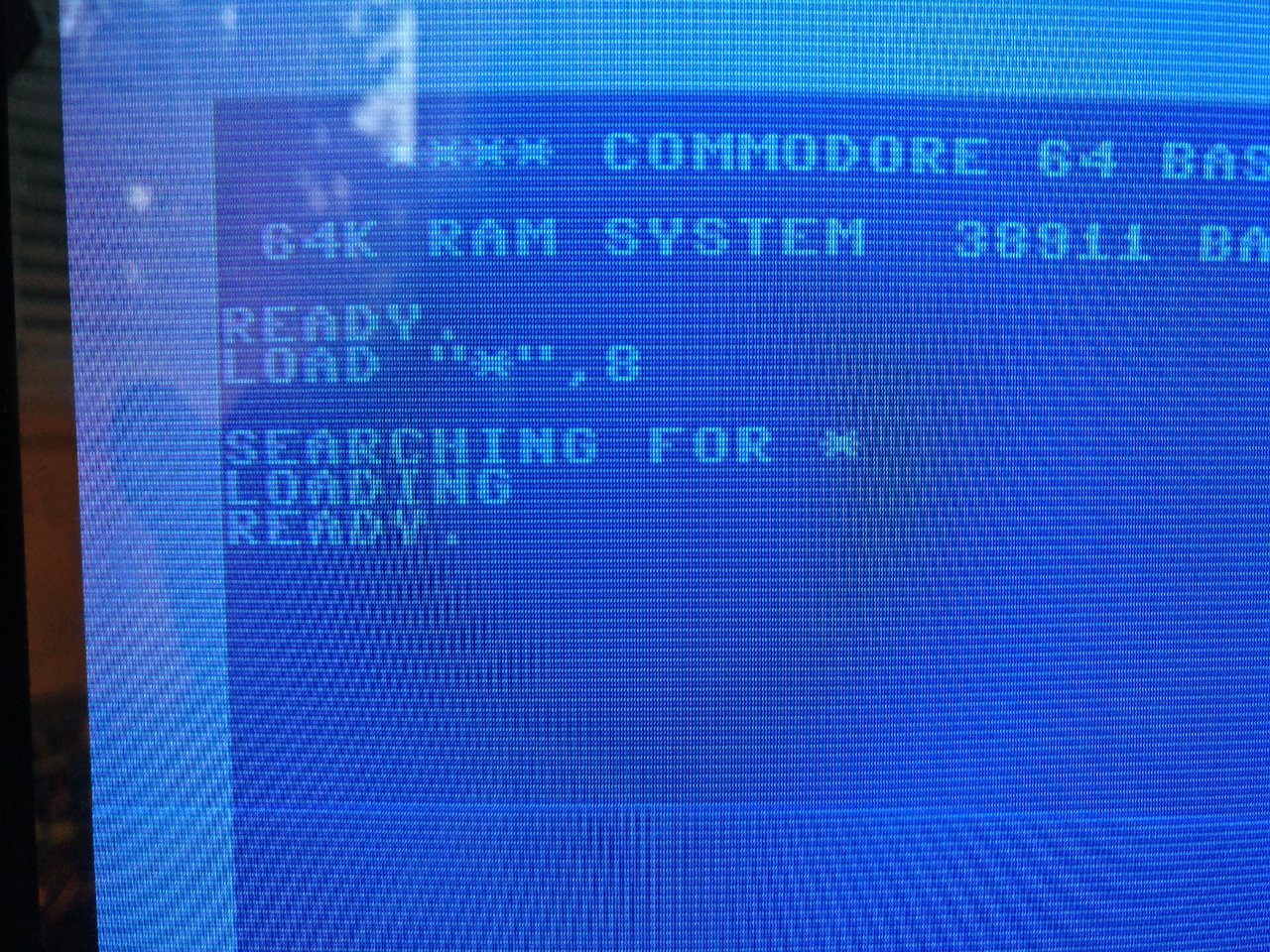 And indeed does it! It's alive! 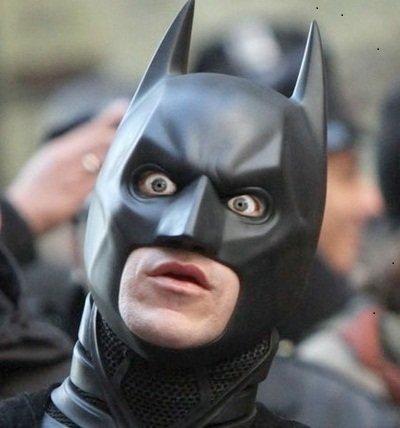 my expression when the disk started to read the floppy

The first thing to do was to find a power supply, I wanted a Mean Well D-50A but the real thing was way too expensive , I ended up finding a chinese knock off of the same model for £13 , reasonable for me.

Once I received it I just put a dummy load on it and tested it with the multimeter, I was impressed to see how was keeping up with the voltage under stress. 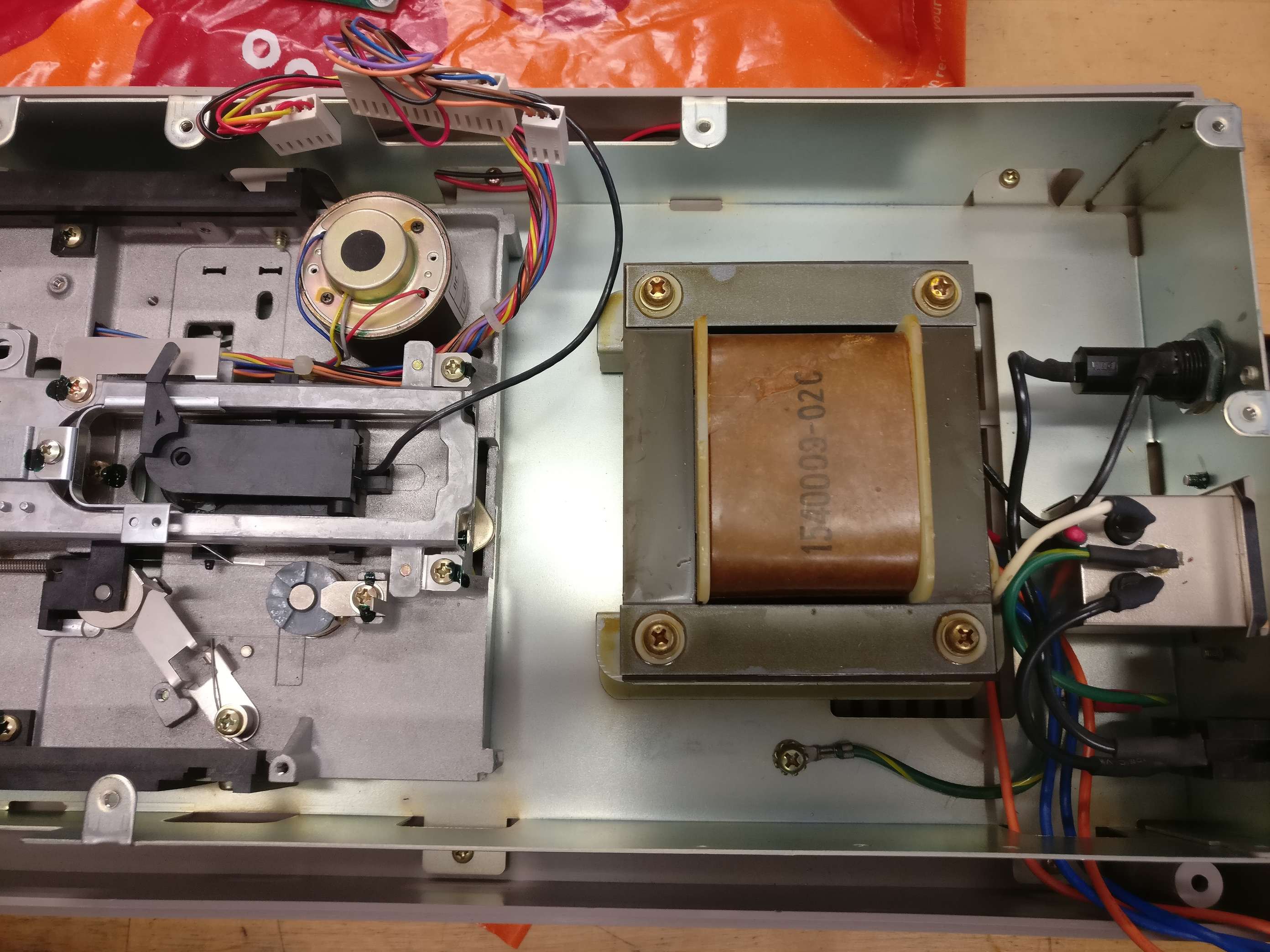 Once the PSU was sorted out, I did turn my attention to the drive, the large PCB carries the voltage regualtion and the logic on the same board. 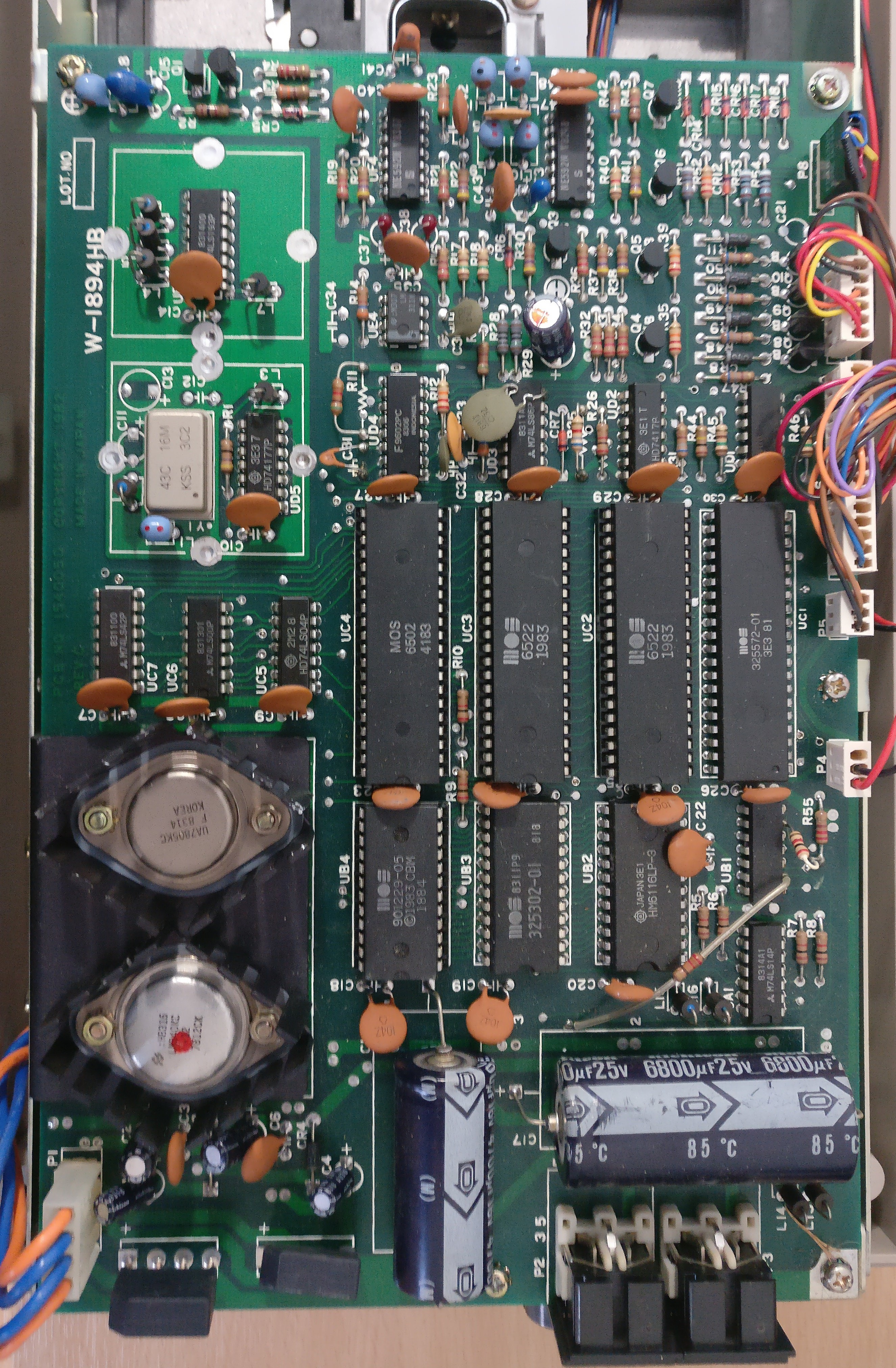 Both regulators and diode bridges have to go : 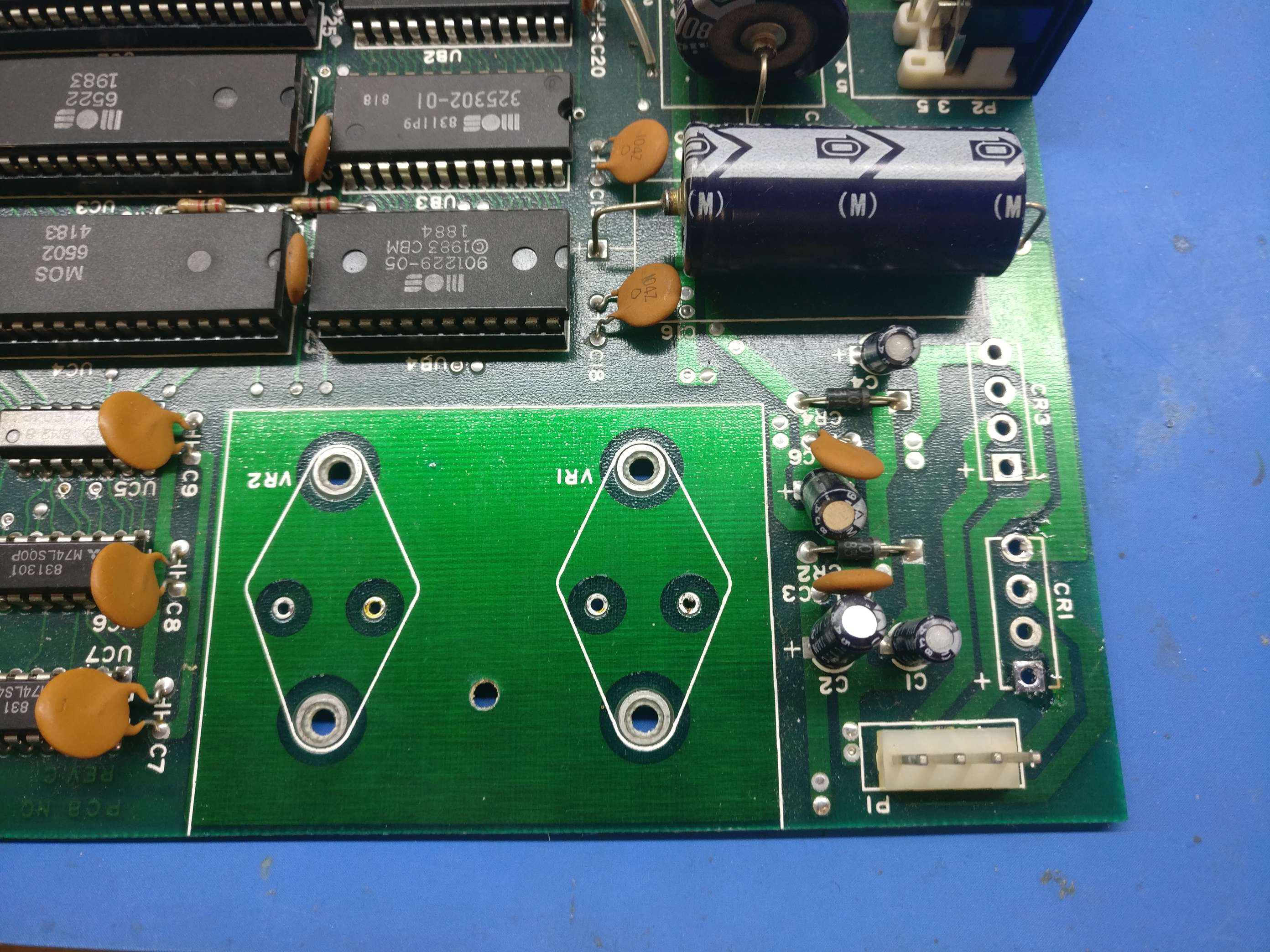 that's better, now we have to trace down the voltages , because the transformer output AC and we have the diode bridge pads we can basically use the traces as we want , I ended making jumpers on CR1 and CR3 and reuse the cable for the connector P1 , P1 in my configuration is cabled as : 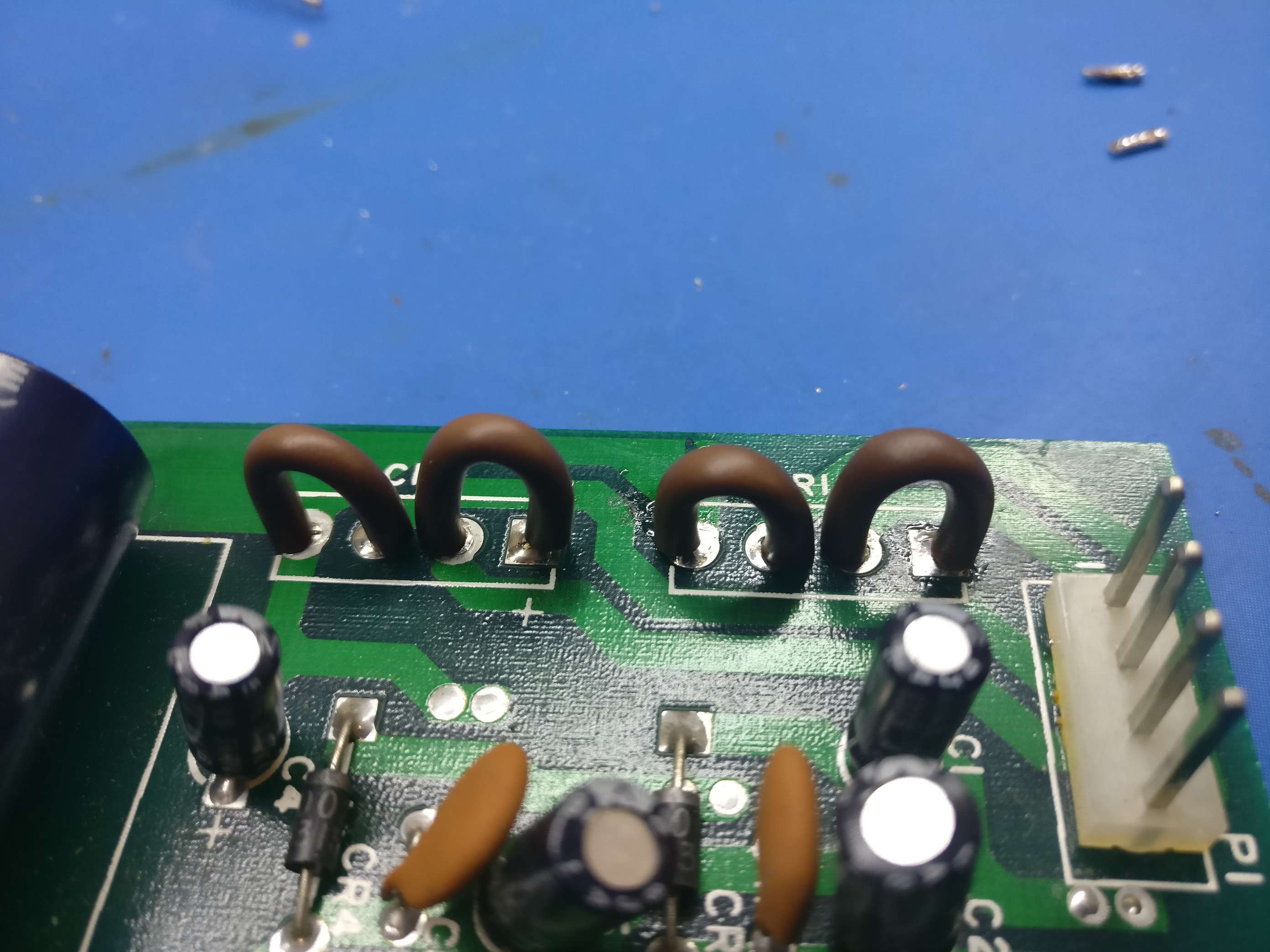 After that I just soldered two jumpers between where the input and output of the regulators should be : 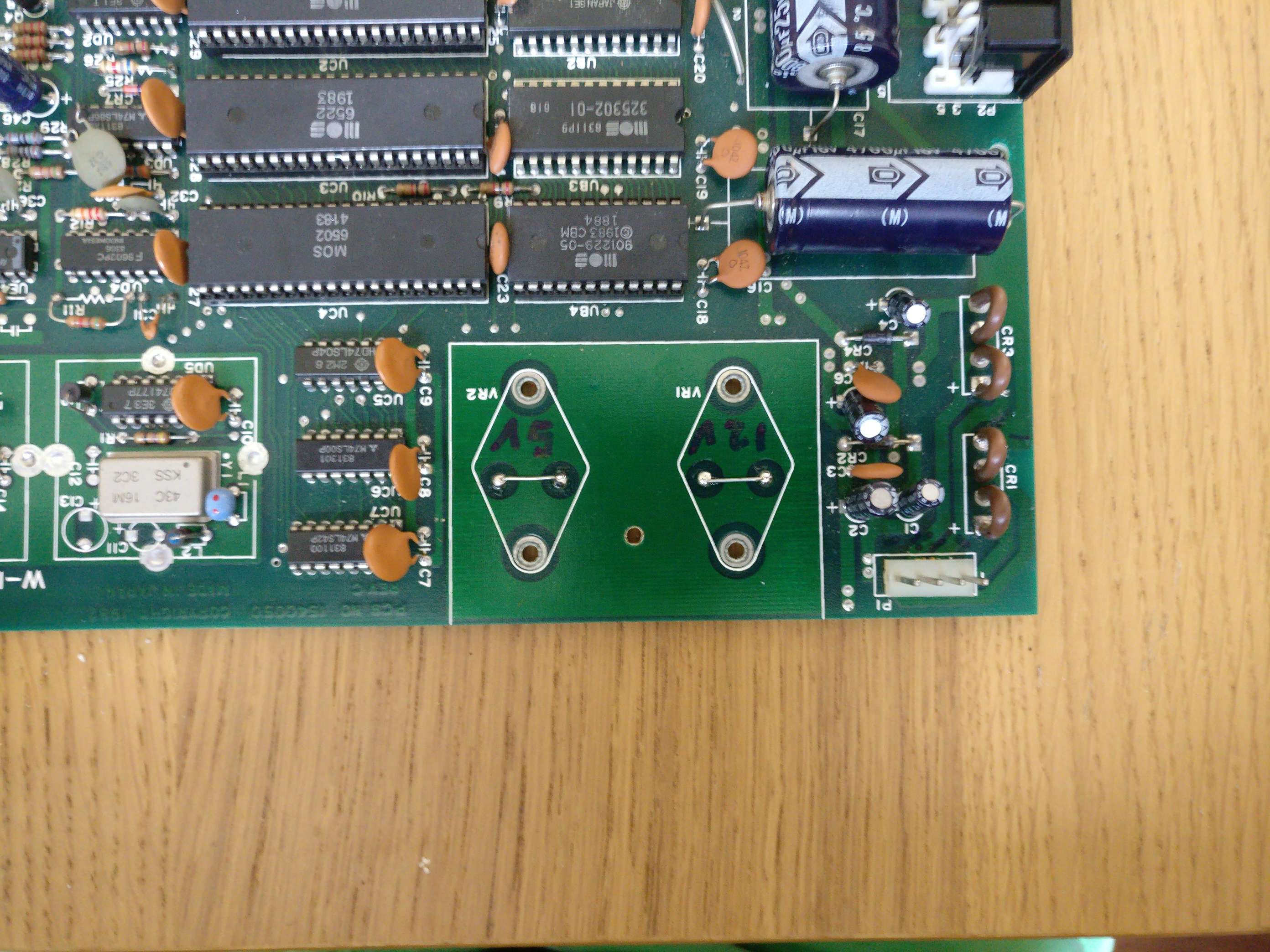 The board is now ready, let's take care of the placement of the power supply : 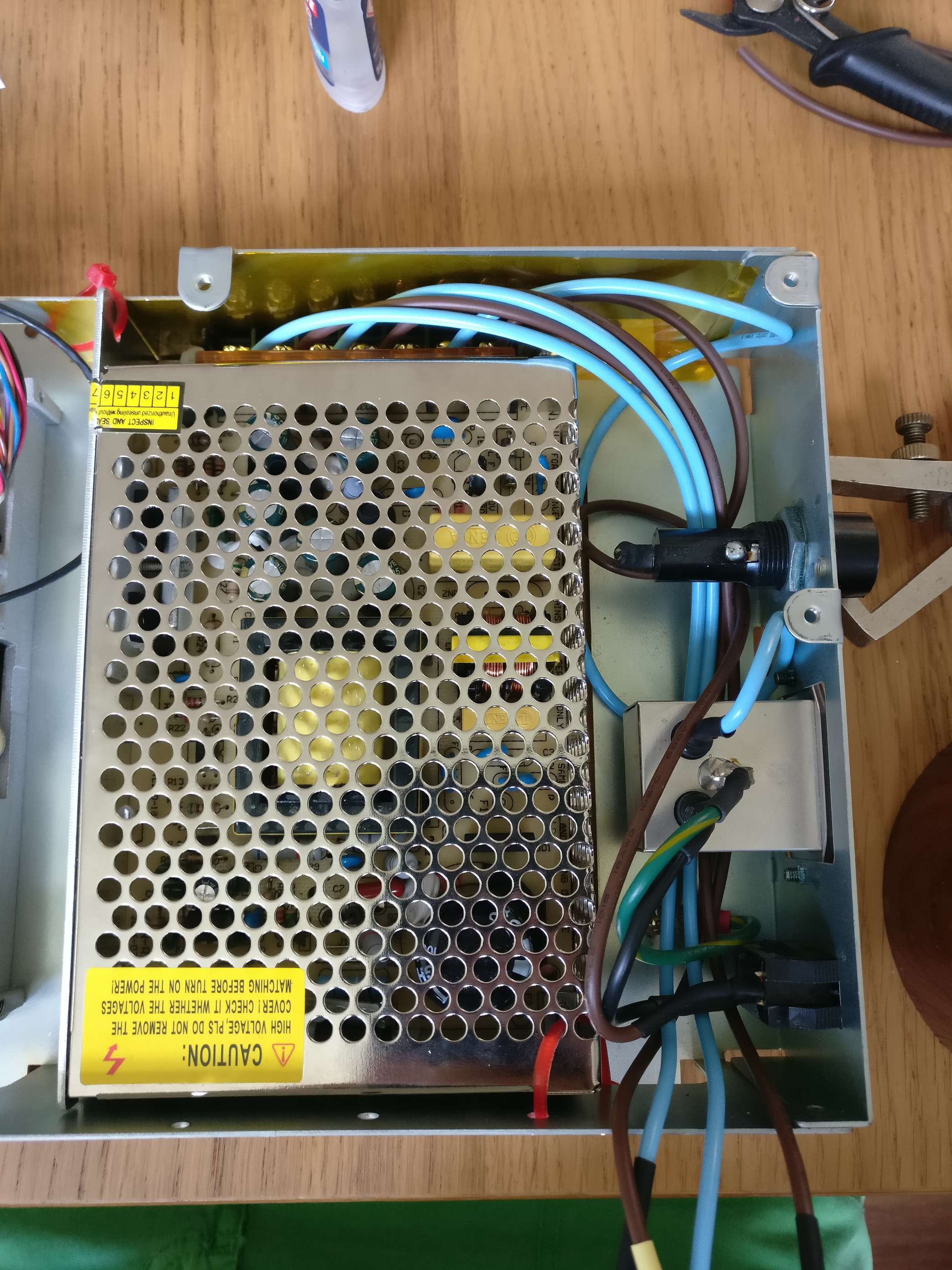 It's a very tight fit, I had to use the screw terminal in a very uncommon way : 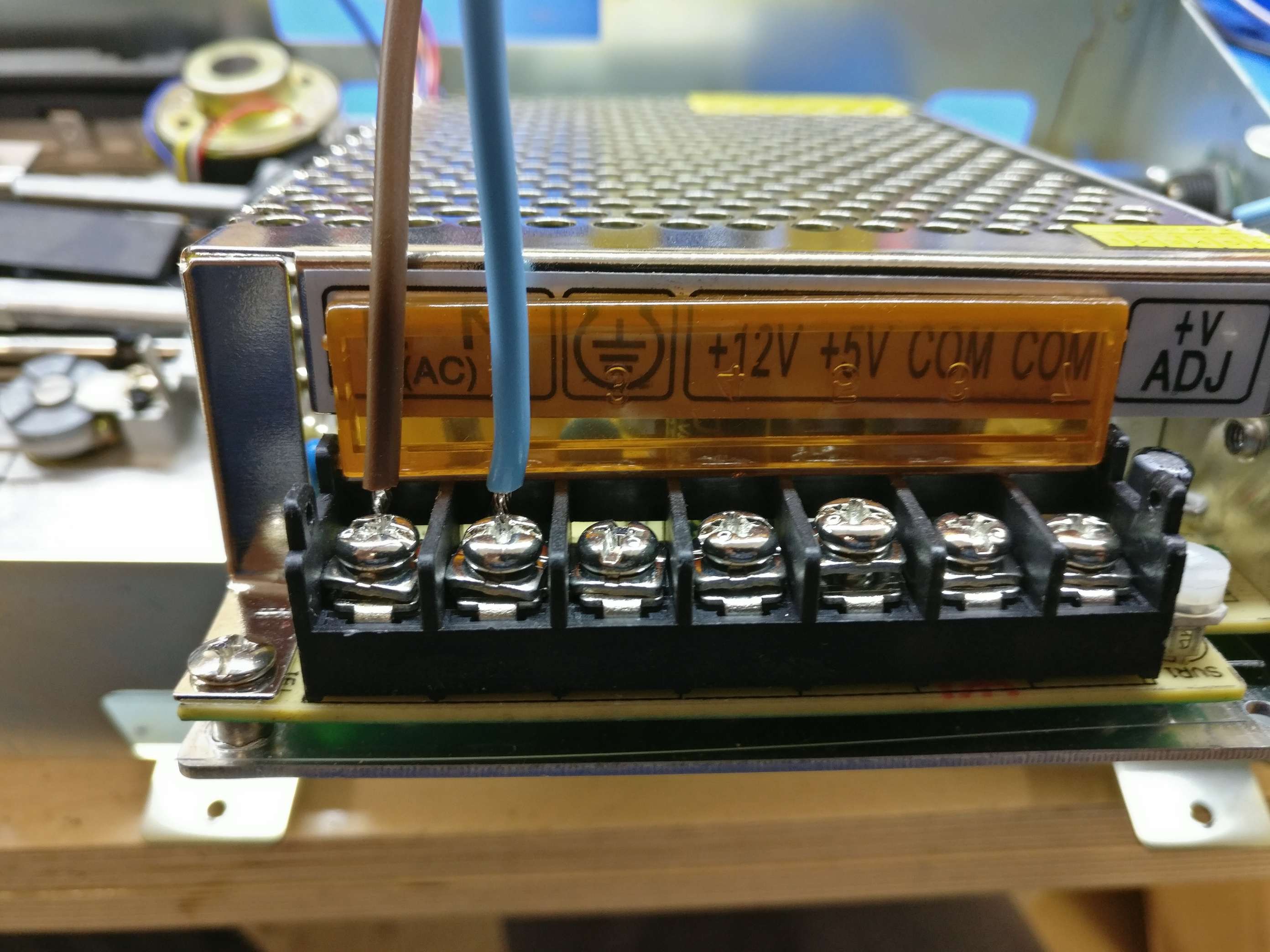 I made sure to cover all the nearest area with kapton tape.

I used cable ties to keep the psu in place, I didn't wanted to drill holes and glue and double side tape are out of question , I completly ignored the fuse, in UK we have one in the plug, one in the socket and the PSU have short and overload protection, sound safe enoght for me :)

Once everything was in place, I screw it back togheter and try it on my setup : 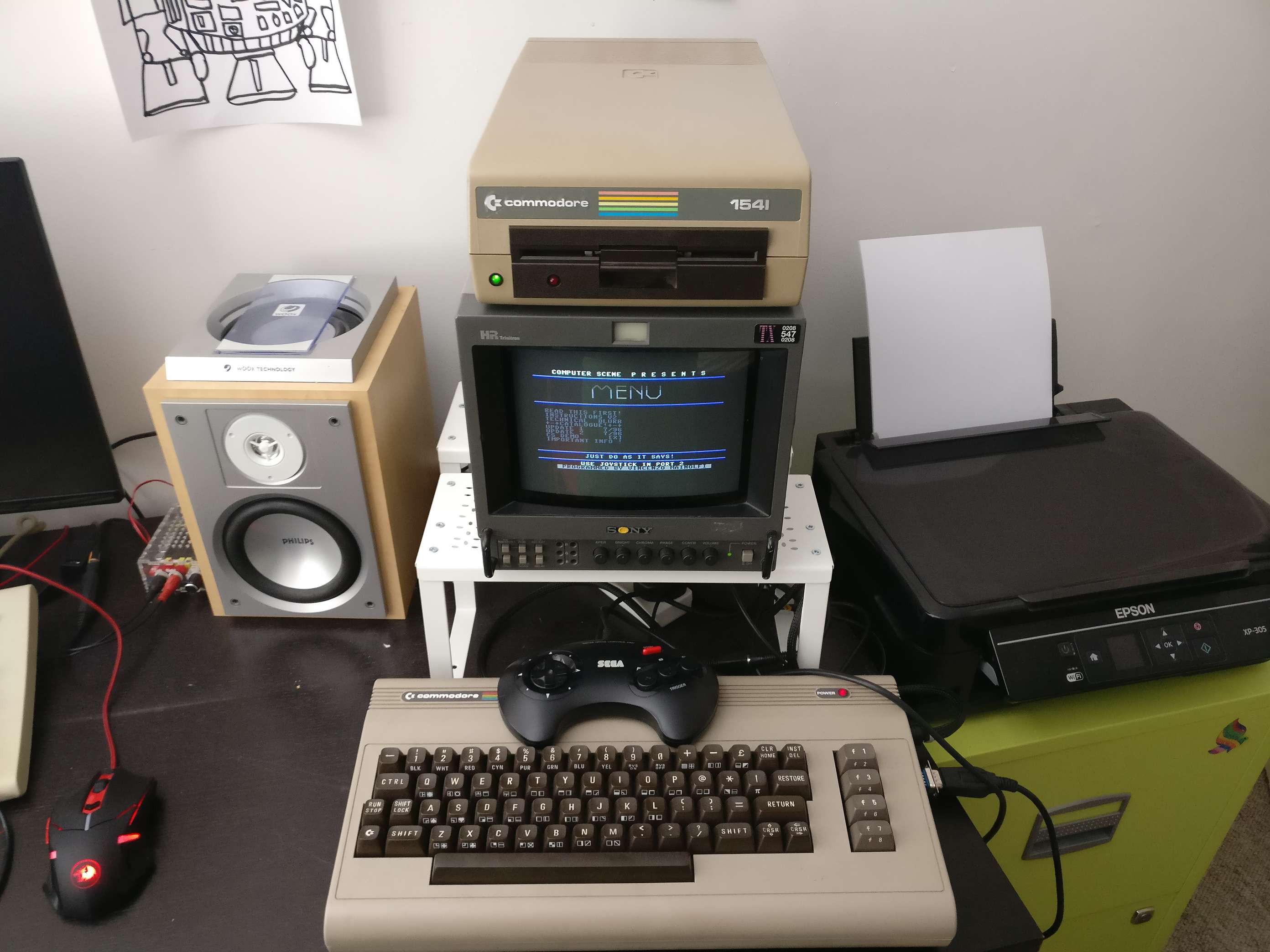 I'm really pleased about the outcome of this , I can store the driver under the screen without worring about ventilation , the next step is to swap the original ROM with JiffyDos !

Awesome build. When you powered the thing with 19V dc, which jumper points did you use?

Thanks for this post, it helped inspire me to give it a try myself! Here's my attempt: https://imgur.com/gallery/52gUQEj

what about those capacitors in the power circuit? Shouldn't you remove those as well, just in case they decide to start leaking? c1,c2,c3,c4,c5,c6,c16,c17?

Also, when you fed 19vdc in for a test, did you just apply 19vdc directly to each input of the voltage regulators?

I left them there for general filtering of the switching current...

what about the points of feeding the 19vdc? Where did you input it at?

Always nice to see old Commodore kit saved from the dumpster. Props there!
The 1540/41 was built with the a rather teutonic, PET-like design philosophy that prevailed at Commodore's hardware division at the time, but cheapened. The head stepped out 90 half-tracks when bumping, and as the stepper actuator was an interference fit on the stepper motor misalignment inevitable.

I don't like the idea of a cooling fan in Floppy drives: dragging dusty air over the drive mechanism and disks is never a good look, quite aside from the noise.

The DOS, was a hidden, and much-maligned GEM. It was multi-processor capable, asynchronous and built around IPC and internal message passing: truly advanced.  I did a lot of in-drive programming in the mid-80's and learned to admire it's brilliant design and coding.

I've done the same thing as the author on one of my 1541's, and the results were likewise excellent: The drive runs much, much cooler.

I found this beauty for way less :)

It certainly would be nice to replace the huge heavy transformer and inefficient linear regulators with a small, light-weight switch mode supply.

But...
I have to disagree with some of your assessments of the original system / design of the whole 15xx series:

"The 1541 was over engineered , flawed design due to Marketing rushing
R&D and Expensive , on top of this, it was heavy and the heat
generated by the cheap linear power supply was the cause of many
hardware failure and short life."

1/2: Over engineered and flawed due to marketing - I don't think so. The bus interface on the computer side was intentionally simple, which meant that the drive itself needed a controller. The only real "flaw" from marketing was the request that the whole drive series be both forward and BACKWARD compatible to the 8 bit line, as much as possible. This is the only reason you can use ANY drive in the series on any machine from a C16 to a C128 (and with adapter cables even on all the oddball +4/TED machines.

That "over engineering" went on to enable third party products which actually solved any major complaints due to speed, allow the drive to Read/Write virtually any format (assuming some physical media compatibility) and made the drive the hands down favorite of hackers, disk crackers / copiers.

What was the better option? integrated "dumb" floppy? I think the 154x series offered SO MUCH potential for its price. Like nothing else on the market at the time or since.

3: Expensive, heavy and hot - No argument there.. lol. Could hold the door open in typhoon winds while cooking dinner.  I def think your project could solve all of that.. ;)

4: Cheap linear psu which caused hardware failure / short life - Um.. very unlikely on all fronts. For historical reference, switch mode supplies were only common in VERY HIGH END test gear during the 1970 and early 80s, or very LOW CURRENT consumer goods. The 1540 and 1541 were introduced in 1982. Only "big box" desktop machines had SMPS, and those were noisy, just as hot, and prone to a lot more failure than the trusty linear supply in the 1541. The capacitors were the only real weakness of the psu, and that would be true of every PSU under the sun. The catastrophic failure modes of the 1541 PSU are spilled liquids or covering the vents (again with the massive heat issue).

No, the most common failure mode of a 1541 BY LEAPS AND BOUNDS is due to the various different drive mechanisms used over the years. Some were more reliable than others.

The fact that after just a little bit of poking on your part, the drive came to life should fill you with some newfound respect for that simple PSU. Transformer. Bridge, Regulators. These things are solid as a rock. Replace the caps and it will run happy for another 30 years.

Not to second guess you, but there are at least 4 probe positions on a diode bridge which will read as a short. The only condition which wont is if the positive probe is on the + output and negative probe on -. If that reads shorted when the board is disconnected you def have a problem there. Overheat could have also caused a melt/short in the transformer, thus blowing the fuse.

Regardless... still interested to see how you get along with replacing the PSU with a SMPS. should def lighten the load and cool it down. ;) And room for a proper fan (which is, in my opinion, the only real design failure of the unit.  I mean.. they had INFINITE POWER! whynofan?!?)

Switching regulators were already a thing back in the '80, Apple was using them and, commodore changed the power supply in the later revisions of the 1541 to generate less heat...

No Fan: That were the good times where computers did not need noisy fans. The C64 also did not have one.

Of course a linear PSU is less efficient and makes more heat, but it is simpler and more reliable. Normally the electrolytics fail only in SMPS because of the much higher stress they get there. And without the 220V -> 110v (user) error it probably would still work without a problem.

What I remember as a major flaw was the lack of a track 0 sensor. So the head was rattling against an end stop for at least 40 track-steps when you formatted a disk and very often came out of alignment.

How to troubleshoot and repair any variable frequency drive.
Project Owner Contributor

How to repair any VFD