This elegant timepiece, accentuated with a moiré pattern kinetic sculpture at its center, displays time with a vibrant array of LEDs.

This wall clock adds artistic style and a calming ambiance to any room. Featuring a moiré pattern kinetic sculpture at its center, the clock serves as a hypnotic work of art in addition to functioning as a traditional timepiece. The time is displayed using a vibrant array of LEDs projecting from the center which cast bands of color onto the wall.

The Moiré Clock started off as a one-off project for the purpose of creating an interesting wall clock for the office. Later we put it on kickstarter for the complete experience of bringing a product to market. As the original idea is an amalgamation of exiting open source projects, The Moiré Clock materials, schematics, and firmware are available to anyone interesting in creating their own.

What is a Moiré Pattern

A moiré pattern is a superimposed visual phenomenon created when two identical shapes are overlaid and displaced from one another. This project builds upon the Moore Pattern design developed by Jeff Lieberman for a previous Kickstarter Campaign. At first glance, the two counter-rotating plates create a seemingly impossible pattern. The end result is a fascinating display of intersecting curves that emanates a soothing and meditative atmosphere.

The interference pattern is visible when the concentric rings overlap.

How To Tell Time with the Moiré Clock

The Moiré Clock displays time using its two rings of LEDs. The twelve LEDs on the clock face illuminate individually to denote the corresponding hour. The perimeter LEDs use two bands of colors to determine the current minute and second The boundaries between these two bands represent the minute hand (stationary) and second hand (constantly moving with every second). Together, all the familiar time information displayed by a traditional wall clock is presented using a radiant display of color. 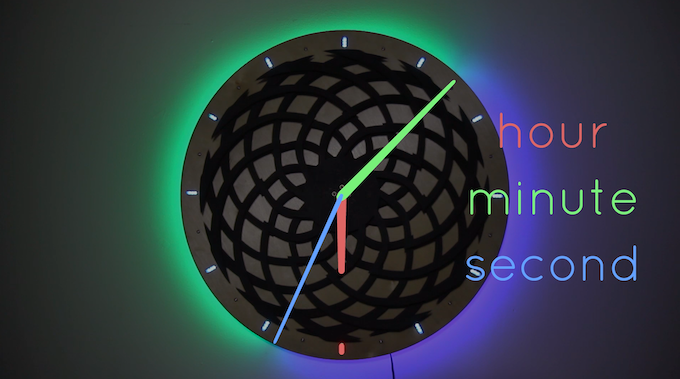 Dedicated LEDs denote the hour. The boundaries between the two bands of color convey the minute and second.

How The Moiré Clock Works

The centralized gear mechanism at the core of the Moiré clock is responsible for driving the two patterned plates that generate the illusionary effect. These components have been custom designed and machined from aluminum for smoothness of operation and reliability.

any video of the working clock?