This is the prototype of a robotic arm I have been designing. And it is my entry for the Hackaday contest for the "Wheels, wings, and walkers" round. IIt is remarkably strong, and the fingers are able to grip, and pick up an 8.4 pound weight. (a gallon jug of water). It is also incredibly sturdy while remaining lightweight!

My goal was to create the strongest 3d printable humanoid robotic arm on the market, while remaining low budget, I was determined to create a modular, easy to repair design. Perfect for use in education or as part of a completed robot (Artistic interpretation of what the robot is going to look like is up in the gallery! Art by yours truly)

The design uses 7 servos, one for each finger, plus one extra for the thumb, as it can do both a "thumbs up" and grasping position. And two in the wrist, which was a last minute addition, so it could rotate while holding heavier objects,

Hello all! My name is Gray and I am an artist and inventor in Los Angeles. Here is my new robotic arm design. It is remarkably strong, durable, and coordinated. And it can be completed for under $200 depending on what computer electronics you use to control it. It will eventually be part of a complete robot. Which I have already started designing, along with mk. 2 of this project. This project was inspired by my grandfather, who was an engineer for NASA and helped with projects as revolutionary as the moon rover. He also designed the flight simulator that the Apollo astronauts used to learn how to fly the lunar module. Every time he would visit me in my youth, he would bring along a robotics project to build with me, And I continue that tradition to this day,

One of the challenges I've had as a robotics enthusiast, is that while many of the open source designs out there are awesome, a lot of them are sometimes very difficult to assemble, have a high failure rate, and are then very difficult to repair. Many of them seem rather fragile, and wouldn't hold up in long term use, such as service robots or prosthetic devices, so while being low in cost to create, they may have a high long-term cost due to repairs and re-printing parts.. My goal with this project is to create a humanoid robot arm that fixes all of these problems, is easy to put together, and can lift a large payload, and ideally, I would like it to be the strongest open source 3d printed robot arm on the market.

This design is totally modular, meaning it can come apart and be put back together with ease, for easy repair and adjustments (anyone who has ever built a robot, knows how essential this is!). Each actuator is driven by a worm gear design on two bolts as a guidance rail system. For mk 2, I plan on making this design a bit more "elegant" but for now, it gets the job done, and well!

I think robotics are very important for the future of humanity, I plan on developing a smaller, more compact version of this arm as a prosthetic, as well as making it a part of an entire robot, which will have a whole assortment of functions for human interaction and assistance. I think the future of robotics will play a huge role in how we move humanity forward and change the way we look at the workplace. This robotic arm is designed to be easy to repair, easily to assemble, while remaining reliable and sturdy. It would also be perfect as an educational kit, which I may offer as a kit or download in the future when my design is perfected.

This is actually a re-design of my first prototype, which unfortunately broke during testing (see build logs 1 and 2), due to faulty 3d printer filament. But like any maker, rather than getting discouraged I saw it as a chance to improve my design! So we'll call this one the "mk 1.5"

design, could rotate the hand with no problem, but struggled when the

hand was actually holding something with any weight, so I changed that!

Will probably come up with something more "elegant" for mk 2, but this

to hold more weight without failing or damaging the servos, my goal is

to great the strongest, low cost 3D printable robot arm on the market,

Currently, it has successfully been controlled with both Arduino and EZ-Robot's software, and I am working on new ways of controlling it for different purposes. 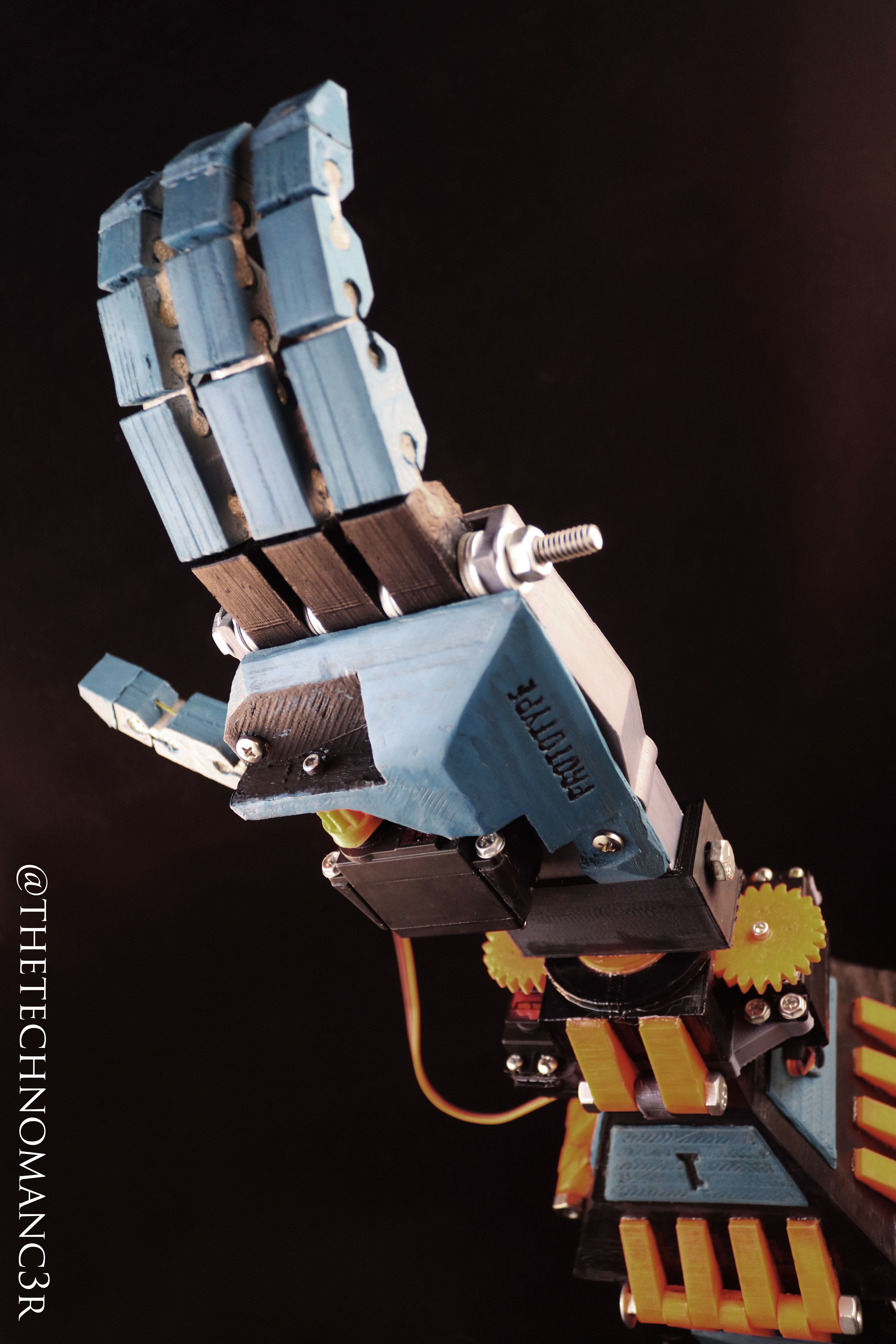 This robot can juggle 7 balls and various juggling patterns by rolling balls on an inclined surface.
Project Owner Contributor

The 2017 Hackaday Prize
The ATG is a D.I.Y. hand exoskeleton that provides a platform for experimentation in the fields of telepresence, haptics, and VR interaction
Project Owner Contributor