I bought an ESP8266 and fought it tooth and nail to get it working. Finally Adafruits Ampy solved it, here's what I found.

ESP8266 boards are pretty awesome, whats not to like? A 160MHz processor bonded to a WiFi solution in a single tiny package that sits on a fingertip.

It supports an Access Point and Over The Air programming (after a fashion), runs Arduino, MicroPython, Lua and probably some others. But I like Python, so I chose to install that. First I installed Arduino on it though, to have a play, but it didnt work out according to plan.

They are pretty little things and pack quite a punch even though the ports are limited. Only the two rows down the sides are free, and there are considerations.

After consulting with a couple of experts (Cheers @Arsenijs @david, @RoGeorge) I discovered I had a dead chip that refused to communicate although confusingly it did boot up. Apparently this is something of a lottery and other users have had failed boards so this is something to watch out for.

I bought mine as a Lua NodeMCU kit so I had the required pin-headers and a 3.3v Voltage Regulator as it uses lower power than standard TTL. I already have a USB USART to communicate with it. They are simple to use, so I thought it would be dead easy to do. 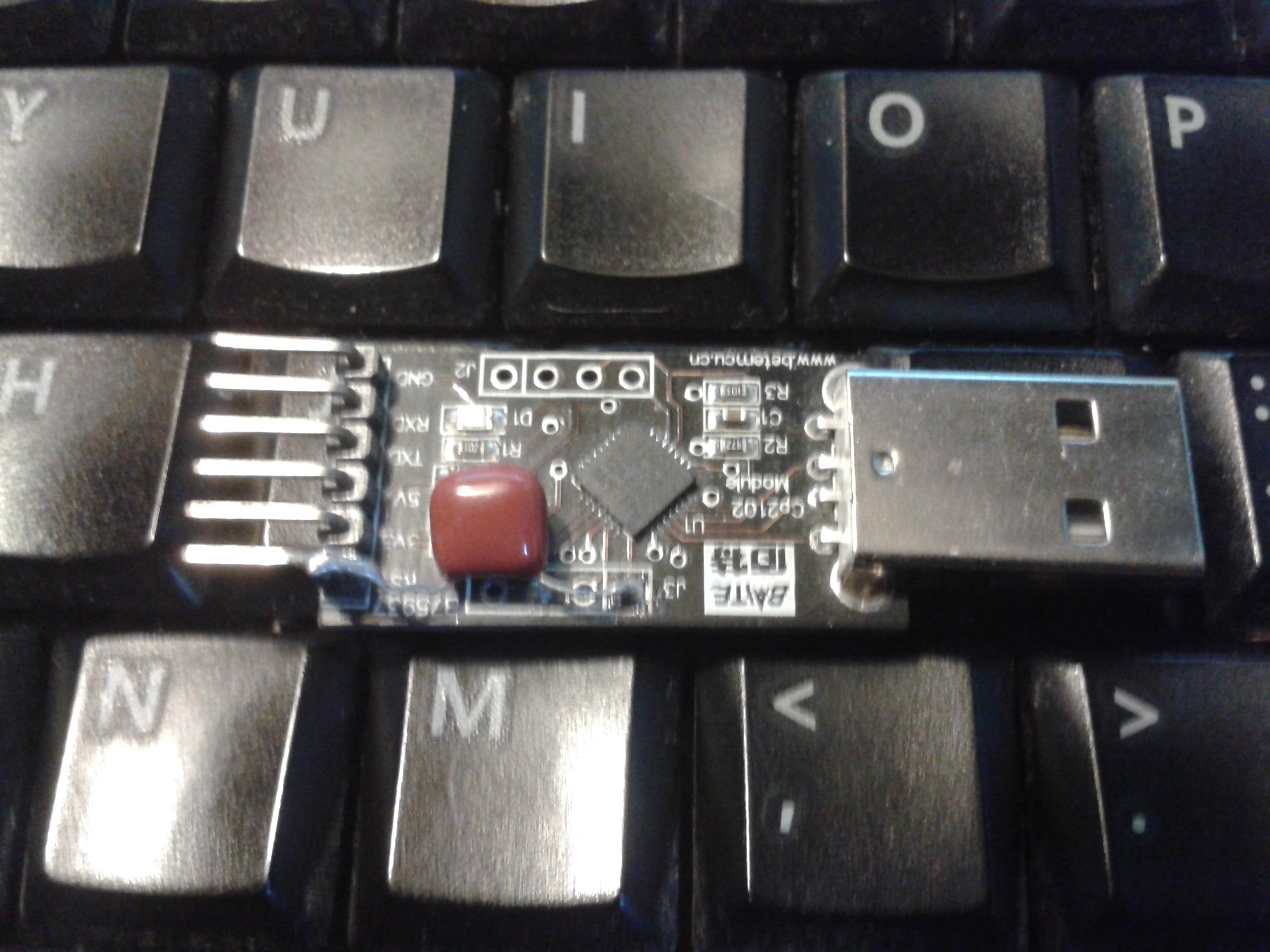 A Baite CP2102 USB USART. These things proved to be a nuisance when I bought them years ago. Although they supply 3.3v as well as 5v on the header, they wont drive a ESP properly and suffer from power supply issues although they will power an ATMega or similar which draws less current.

They also have the legend printed client-side, so the TX pin is labelled RX because that is what it connects to. It took a lot of swearing and eventually a scope to find this out, usually pins are labelled using the convention of what they actually are. And to garnish the plate, the 2102 USART doesnt carry the correct reset signal out of the chip, so I've cut a track and bridged the DTR signal that the host uses as a transport. DTR is a rising-edge signal, and the Megas use a falling edge on their reset line, so a small capacitor behaves as an inverter and pulls it low when DTR toggles. This is built into more modern chips but it's worth knowing.

ESP8266 doesnt behave the same as an ATMega

When a Mega resets using Arduino's software, the bootloader pauses and waits for a programming code, then boots the program stored in its memory if it doesnt get one. An ESP expects to have GPIO0 held down while it boots. This isnt easy to do, although its less of a lottery than trying to program a Mega without a reset signal. Again, Arsenijs kindly explained the obvious steps that you wont find on the internet unless you bought from Adafruit. They are hideously expensive and the delivery to the UK is extortionate as well, so I bought mine off eBay... 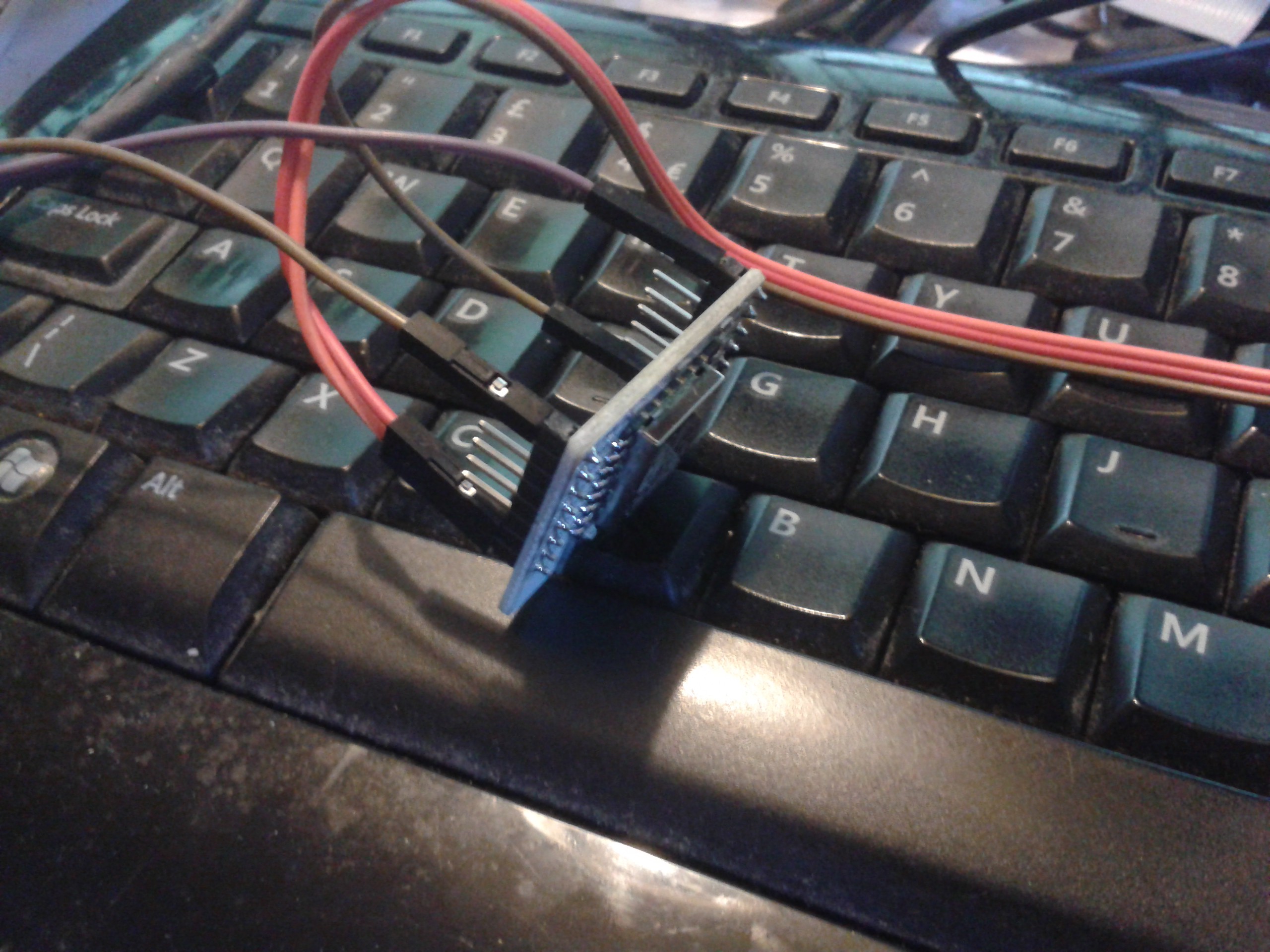 Trying to jumper the breakout board was a pain, so in the end I took a bit of strip-board and made a programmer from a cut-down IDE connector and a couple of buttons for RST and GPIO0. (Thats not Blu-Tack, its epoxy putty to hold the headers in place because the IDC connectors dont fit stripboard very well) To enter programming mode, hold down RST, then GPIO0, and finally release RST while still holding GPIO0 down. You only need to do this with Arduino, once MicroPython is installed it has a shell you can talk to to transfer software. By now I was getting excited, after the dead board and all the messing about I finally got a heartbeat, I burned Blink on it, but the only LED is on the TX so I then tried the Serial examples from the Arduino IDE. Perfect, they all uploaded with no trouble at all and Lua was gone.

Next I downloaded MicroPython and burned that to the board following the instructions, and verified it worked in Arduino's Serial Terminal briefly but I didnt want to develop in that...

I loaded up CU, an ancient command-line terminal program that fell off the Unix wagon early on and I've been using ever since in Linux but for some bizarre reason all it would do is receive from the ESP. I tried carriage return and linefeed options, flow control and switched to plain ANSI but nothing made a difference. CU isnt very friendly, so I tried Minicom and that was the same. I also briefly loaded Python's Serial library which worked without trouble, but I didnt want to write a terminal myself.

I found out from Putty that there's something hinkey with the transport layer in Linux that doesnt like the USB, but at least it worked even if it did complain bitterly about every character it got back. 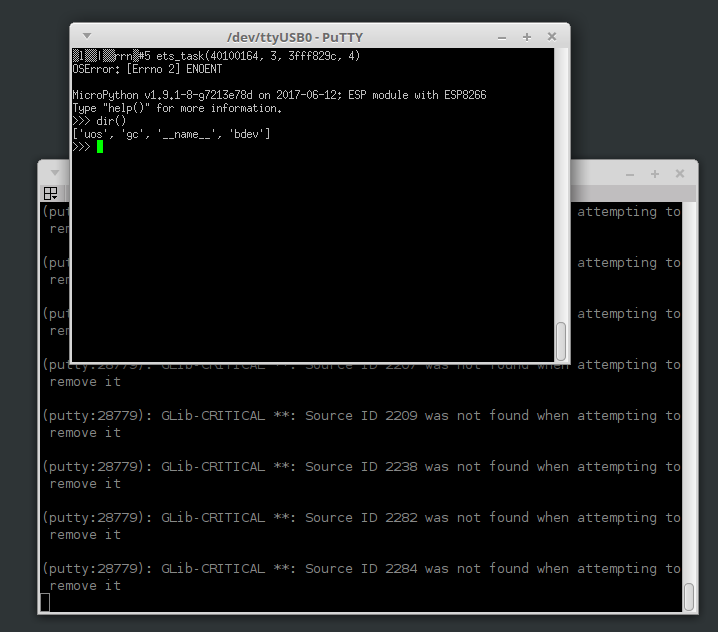 reminds me of the hassle I've had when I started with #Ignore this ESP8266 board - accidentally switching RX and TX ... installing everything and make it work for me... but now it's all "hook up FTDI adapter and start arduino" or just buy a Wemos D1 mini - they're cheap and easy to start with.

Lots of little hints and tips show up in this writeup. Great reading, and just a bit tantalising. I'll have to follow up on that DTR reset stuff on CP2102. I haven't found any ESPs dead-on-arrival, but there are a few in my work box still in their packages!

@Morning.Star, thanks for kind comments on ESP adapter to DIL. Hey, the whole idea of sharing is for others to build on what we do. Use whatever way you want. Sometimes, it is just about getting something to work. But, it is really satisfying when someone says it cannot be done, and its gets done anyway!! I put a Forth on ESP12 and that was fun! For startup switching to allow programming ESP12, I just had to remember to plug in a line on my breadboard before I powered up - so a switch is just getting fancy!!

Yeah I wish I'd seen that link before going all gnarly on it. It's pretty much all there. However I did search specifically for 8266 and not Feather or Huzzah as I just have bare modules. I think it was @Radomir Dopieralski mentioned they might be trouble... I can see a place for things like the Feather now after grumbling about expensive breakouts from Adafruit ;-p

I'm glad you didnt look too closely, I only posted my wifi password and had to spend half an hour re-securing my network when I noticed. The security on them is a little basic, MicroPython certainly could use a password supervisor built in IMO

Again, thanks for all the help, much appreciated. :-D

Great writeup! Some things that I wanted to note:

1) That USB-serial "bug" in Linux sounds really weird - I never have problems with it, however, I do use other software (I do remember having problems with minicom, hardly ever got it to work) =) You can use "screen" - "screen /dev/ttyUSB0 115200" gets you a serial terminal, and "Ctrl+A k" exits it.

2) IIRC lots of my knowledge is indeed from Adafruit tutorials on MicroPython - https://learn.adafruit.com/micropython-basics-how-to-load-micropython-on-a-board/esp8266 (this one I actually haven't seen, but it encompasses a lot of what I know) It's weird that they're ungooglable for you - I wonder what the culprit could be.

3) ESPs can be like that, until you get a setup that you know is supposed to work - then it kind of becomes really easy, in my experience =D

4) That's a great programming adapter you made =)

It was between this or 'Me building other people's projects... with a vengeance'
Project Owner Contributor

Another installment in the series 'Me building...'