All original hardware associated with this project is licensed under CERN OHL v1.2.

All original firmware/software associated with this project is licensed under LGPLv3.

Emergency Radio Beacons
Radio beacons are used in many sectors to track or locate people, animals and other important assets. They are also widely used in Search and Rescue (SAR) situations, and are present on most aircraft, marine vessels and also used by people venturing into remote areas, where they are known as Emergency Position Indicator Radio Beacons (EPIRBs). Whilst some emergency beacons are capable of sending out their exact GPS location, the majority of them can only be systematically located to an area of several square kilometres, requiring a traditional SAR grid search at this location, either on foot or from manned aircraft. 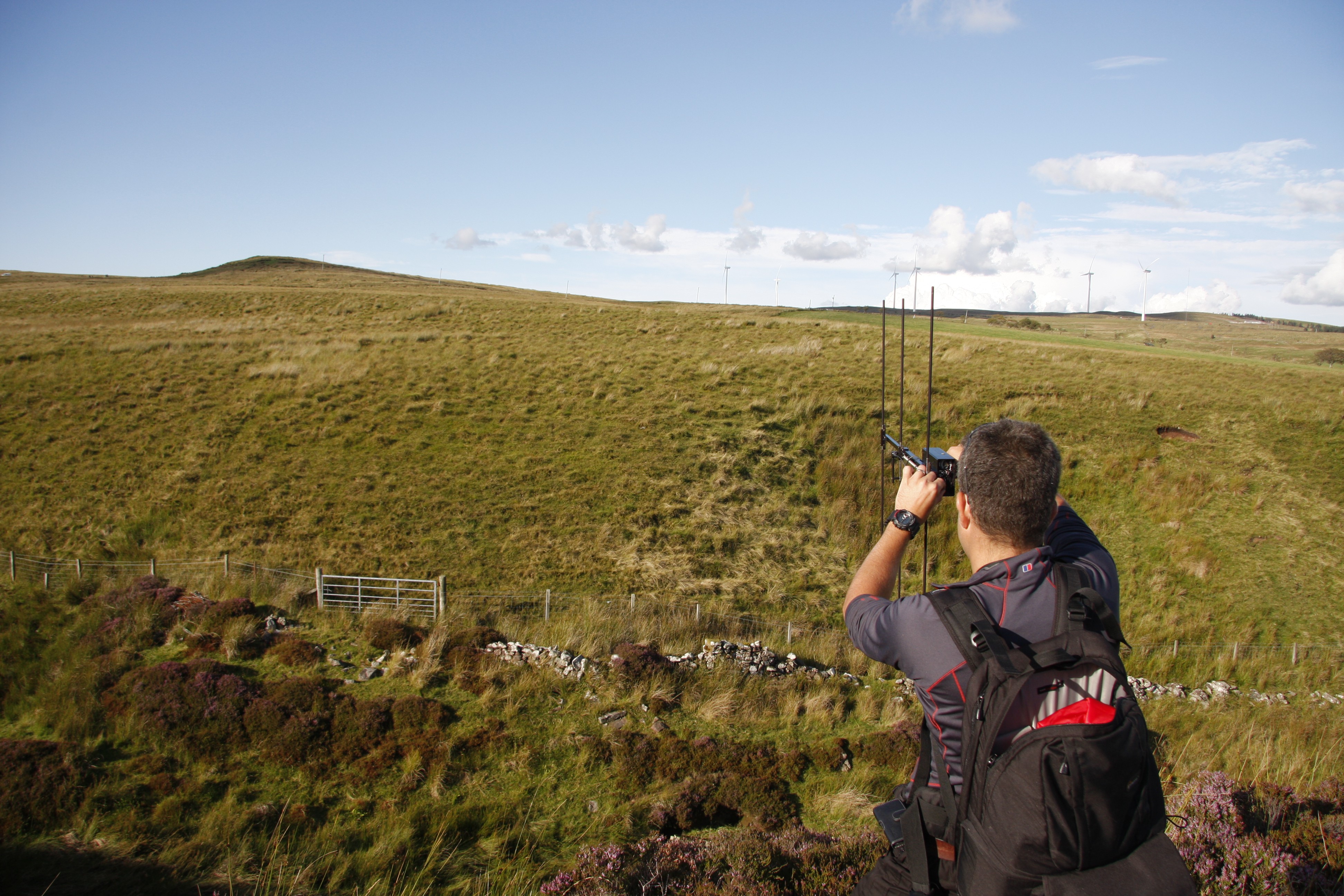 Hunting down a rocket on a Scottish moor using a Marshall falconry tracker system.

Amateur Rocketry Trackers
On a more personal note, radio beacons ("trackers") are commonly used in amateur rocketry, my main hobby. These make it easier to locate rockets after they have landed, as they can often travel quite a distance horizontally whilst descending under parachute.  Rocketry trackers also fall into two categories, those with GPS and those without. Whilst GPS is becoming more affordable by the day, non-GPS trackers still have the advantage when it comes to size/weight and transmission range.

Rocketry trackers are found using traditional ham radio "foxhunting" techniques, with AM/FM radio receivers and a directional antenna. This is definitely a skill which improves with practice, and can be quite tricky if your rocket lands in an area with hills or ditches etc.

The problem with all of these systems is that, even with a reasonable idea of where the beacon is located, it can still take hours and many miles of walking to find it. Things can be done much more effectively if the search is performed using manned aircraft, but this is obviously an expensive proposition and may not always be available due to the location of the search or current weather conditions.

The Bloodhound Drone project aims to develop an autonomous drone payload which can assist with the search for a radio beacon and quickly give SAR personnel or trackers a more accurate location for their target.

But surely GPS-enabled beacons make this project unnecessary?
Actually, no - whilst GPS beacons are great, they do still have some problems which this system can help alleviate. Depending on the terrain around the beacon, the signal may not be able to travel very far horizontally. This is particularly true if the beacon is laying on the ground (among some plane wreckage, maybe); the range of the transmitted radio signal is very quickly eaten up by the ground. Having an aerial receiving platform helps solve this. GPS beacons are also reliant on the beacon having a clear view of the sky to get a GPS location. If it cannot determine its own position, you have to fall back to traditional radiolocation techniques to find the transmitter anyway.

This project will create an electronics/radio payload for mounting on a drone (fixed-wing or multirotor as appropriate for the situation), which integrates with the Ardupilot autopilot platform to direct the drone to perform an aerial search for a radio beacon.

Initially, this project will focus on locating the beacons used in amateur rocketry, before eventually expanding to work with common EPIRB formats. Testing with rocketry trackers brings a number of advantages, as real EPIRB transmitters (understandably) have very strict rules governing usage and testing. Rocketry trackers can be used any time, any place, and amateur launch sites across the globe have a huge variety of environments and terrain.

It is certainly my hope that, in the future, this system could be used by SAR teams to speed up the process of searching for emergency locator beacons without using expensive manned aircraft. It appears that currently such drone radiolocation technology is limited to military drones, a quick google doesn't even show any overpriced commercial offerings. By keeping the project open source, teams should be able to integrate the payload in whatever way best fits their particular needs without a prohibitive cost.

Anyway, an initial block diagram of the proposed system is shown below: 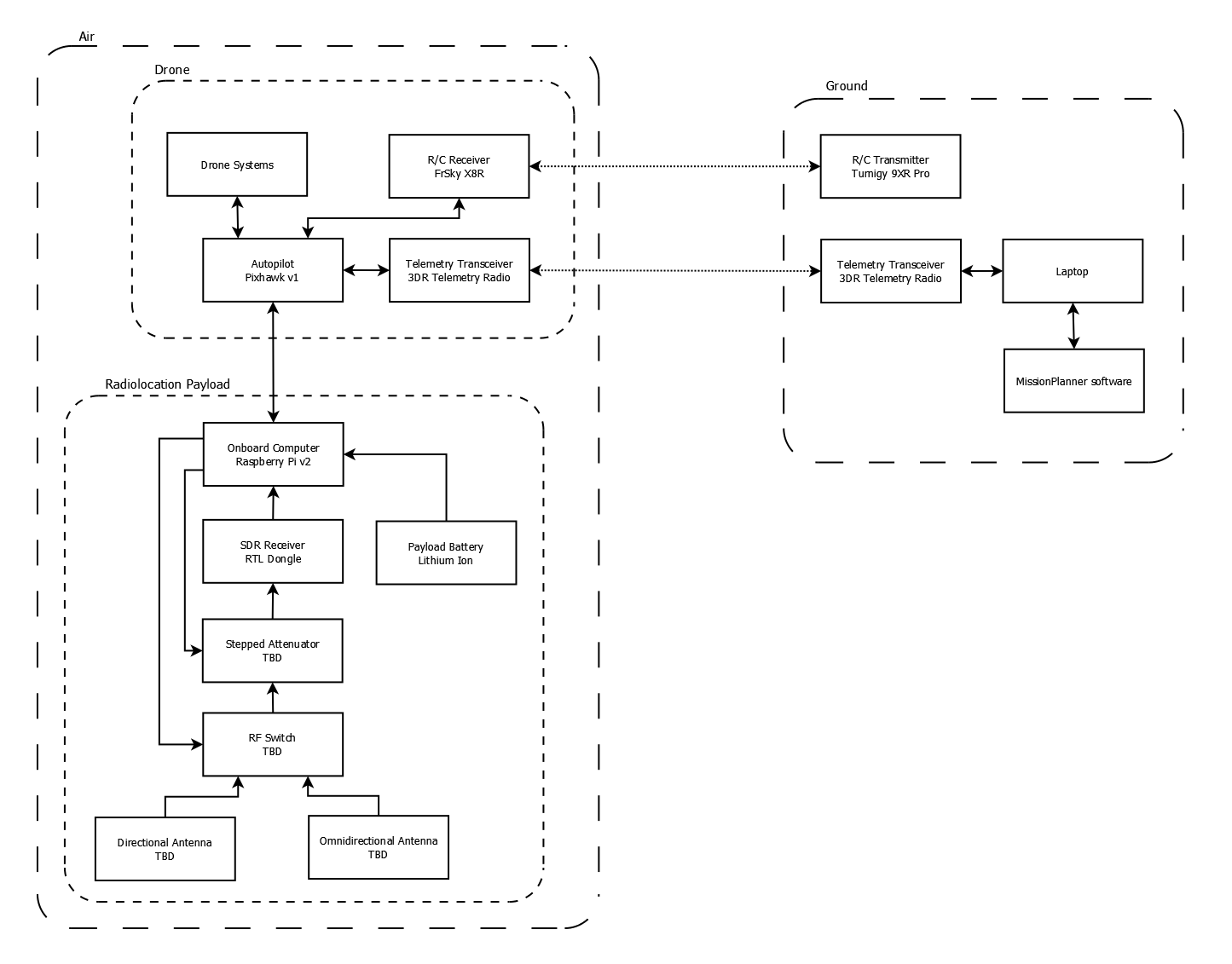 Drone
The specific drone used is fairly arbitrary - the main concern is being able to mount antennas in the correct places without hitting propellors or getting in the way of takeoff/landing. In addition to control, the FrSky R/C receiver is also used to provide telemetry feedback to the R/C controller with all of the standard ArduCopter telemetry you normally see in Mission Planner during a flight.

Radiolocation Payload
The Raspberry Pi used in the payload interfaces with the Pixhawk via MAVLink to command the drone autonomously, acting as a "companion computer" in Ardupilot terms. I am hoping to be able to interact with the software running on the Pi entirely via MAVLink, so I can utilise the drone's telemetry radios as the control link for the radiolocation system instead of adding a third radio transceiver to the drone!

The radio receiver for the time being will be a bog-standard RTL-SDR USB dongle, the sort of USB digital TV receiver you can get for £5. This will have (at least) two different antenna systems plugged into it, via an RF switch (controlled by the Pi) used to select the input, and a stepped attenuator (again, controlled by the Pi) which allows strong signals to be attenuated to a useful level before reaching the SDR.

The actual antenna systems to be used are where a large part of the development and testing of this project will take place, as the challenge is to find something that is effective, small/lightweight, and can be automated using an SDR. At least initially, the plan is to install an omnidirectional antenna alongside some sort of directional antenna, but who knows?

The project is split into several distinct stages, some of which can happily be worked on in parallel: