Our Product VALTRACK V2 is a GSM/GPS based Vehicle/Personal tracking device.
It is small in size, low cost & easy to install.
Alerts the owner if someone moves the vehicle
Track your elders and children for 3 days on a single charge using SMS
Listen to what is happening near the device using the Auto answer feature
Track your Motorcycle, Car, PET , Children or Elders location on map using SMS or Cloud based tracking.

This is a small sized GPS tracker which is being designed on a PCB about the size of 52mm x 18mm.

The main goal of it is to have it done at lowest cost possible.
Image of Valtrack V1 GPS tracker : 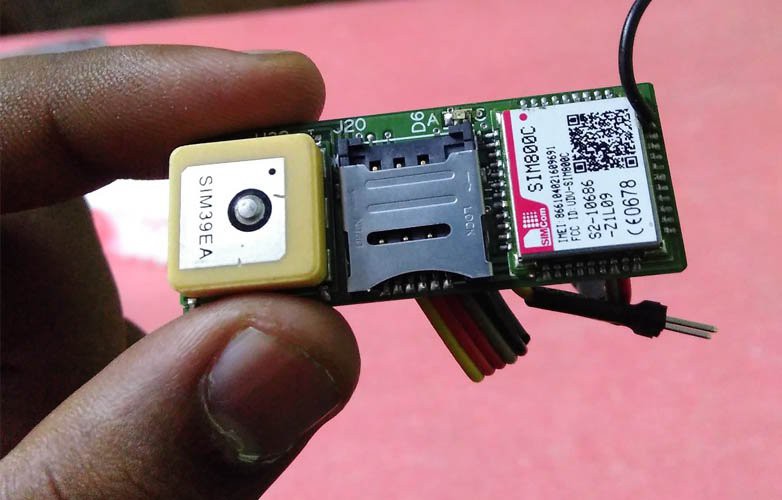 I had already done a earlier version (Valtrack V1) of it and tested it for 6 months in my motorcycle.

But that one had a few improvements to be made.
- The earlier device was always turned on and it was continuously sending data to AWS server at 1 minute intervals and in 6 months i had to replace the battery because it was drained to the level of where it was not getting charged again.
- One more reason was that i used the vehicle only twice once in a day to drive around 5 kilometers. So it was never fully charged back up.

- The Valtrack V1 version was not designed to take in 12VDC directly from vehicles battery. I had put a small Switch mode regulator breakout board to reduce voltage to 4V to power the tracker.

- Also V1 didnt have a internal battery support which can be used to track stolen vehicle when the main battery source is cut off.

Whats new in this V2 version :
- Added a motion sensor for saving battery power. GSM is turned on only when vehicle is in motion and turned off when vehicle is not moving.

- Added a 12V battery charger which can charge the internal Lithium battery and also supply 4V to the tracker for operation. This charger can also charge the battery on USB when used as a personal tracking device

- Internal Lithium battery is useful to power the tracker when main battery source is removed.

- Added a USB connector to charge battery in addition to +12V inputs. This connector can also be used to debug the ARM MCU using SWD.
- Added a 2 Mega bit (256 kilo bytes) EEPROM support for logging data and FOTA (Firmware update over the air)
- Added a SOS switch support which can tell the tracker to make a call or send a SMS or send push notifications to the family or friends in case of emergencies
- Added a Ignition cutoff relay driver support to cut off power to ignition remotely in case of vehicle theft.
- Added Bluetooth antenna support for having possibilities to configure the tracker using a Android/IOS/Windoes mobile application.
- Changed MCU to a low power version with QFN package to save space and power.

# Where I Need the Most Help

Most of the hardware design is done, I am sending it to fabrication this week and ordering components from mouser.

Once software development is done i would like to have a custom casing made on this provided i get enough funding by sales to get it done.
Until that i am going to put custom case design on hold.

Next version can be extended to make it to have support for
- MQTT support on TCP using GSM module (Possible in this version also)
- Lora network for intra city tracking which will be less expensive compared to GSM. Useful for tracking elders and pizza delivery vehicles or courier deliver vehicles which work inside city limits. ( In version V3, needs hardware mods)
- Convert it to a IOT data logger or environment monitor by addition of sensors.

# Why Sponsor This Project?

Sponsor this project to help it to come to life.
- Most of the trackers used today are closed designs made in China and not configurable to other servers and no possibility of them getting repaired.
- The components used in this tracker will be made open for easy repairs or replacements.
- I intend to make this tracker as a development board like Arduino with all goodies like GSM +GPS+Accelerometer+Battery charger+Device control option in one package.

Really instersting project and I am interesting into buying this product, just I will check if it will work in Canada... here it's costly also to use gsm network which is the major turn off but after having so many bikes stolen I am considering this option...

I like how compact you've made this and all the features implanted as well...

How much are they?  I could use one to track some work trucks.. would like to add them to a page I can keep open on a monitor.. that way I could track my fleet of work trucks live.

yes, you can definitely use it for that. Costs around 55 USD right now. Less for more numbers.

Let me know if you want one. I am shipping some to New York next week. You could share on shipping.

Thank you for the interest.
Yes its ready for sale.
What is your interest? as a end user or for DIY experiments ?
Check out the latest video.

is the V2 ready ? i would be interested in the final poduc.

Client’s idea was to make a very small-sized PCB that could be enclosed inside handle of a scissor in a way that with each scissor cut...
Project Owner Contributor

The 2016 Hackaday Prize
A low cost communication device, similar to a tablet, this can function without an energy grid or a network infrastructure and is secure.
Project Owner Contributor