My idea is to implement a device for detecting lens systems (camera, binoculars...) directed towards it.

It will rely upon the assumption that such optical systems function as retro reflectors. A rotating head will emit a laser line and detect reflected light.

The direction of the detection is recorded and sent to a mobile phone for alarm and display. 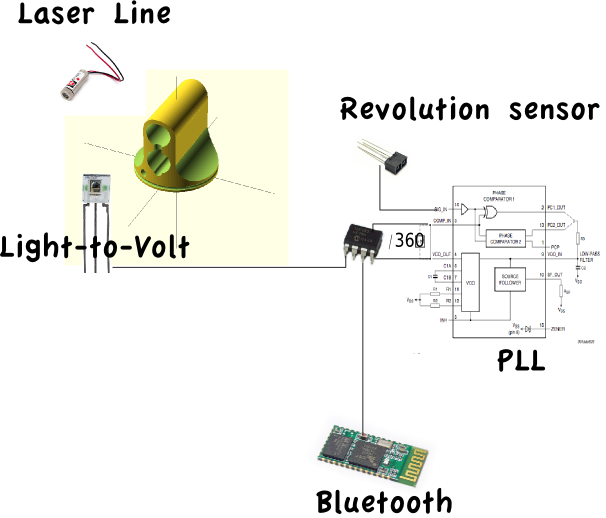 The rotating head is 3D-printed. Mounted on a slip ring. The head is rotating with the help of a salvaged cassette player motor and a rubber band.

Every revolution of the head is detected by a IR-reflex detector. And the resulting frequency is multiplied by 360 with a 4046 Phase-Locked Loop (PLL) IC.

For divider in the PLL the timer/counter module in a pic12f683 is used. That micro controller is also responsible for reading the counter when a detection has occurred and send that value (corresponding to degrees) on a serial line.

That serial line will be connected to a bluetooth SPP module so a mobile phone, tablet or computer can be used for display system. And as a future possibility an on-line tactical map.

James Barber wrote 08/25/2014 at 19:56 • point
I like the idea...but for something like this, passive prevention would probably work better (and simpler) than active prevention. If you were to simply mount several IR/UV leds on a pair of glasses or a hat, you wouldn't have to worry about images being taken of the subject sheerly for the fact that the leds would in essence destroy the captured image.

Tomas Holmqvist wrote 08/25/2014 at 20:10 • point
Of course, or a simple hoodie to hide under.
But why take the easy road? The actual reason for me doing this is to see if it is possible to cheaply implement something like this.