After 2000 units, we finally have a design we like

There's some through hole & surface mount soldering to be done, but when you're finished you've got a sparkly eyed Tindie head lapel pin.

This project log is a bit of a retrospective of the development of the Tindie Blinky LED Badge, how we made the first few hundred units, what we didn't like, what we changed, what we changed again, and how we ended up at a design we liked. Oh, the new design has a vastly reduced BOM cost, thanks to some strategic Alibaba shopping. 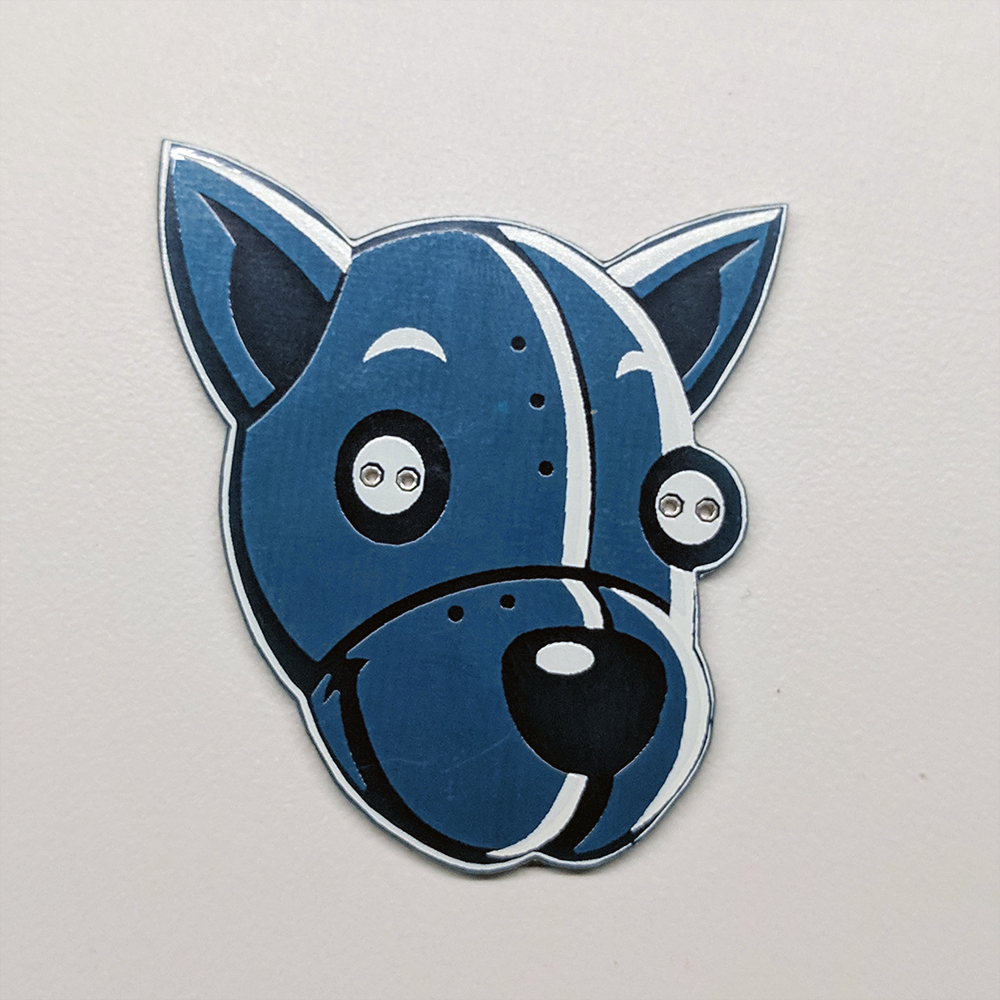 This is the first revision of the Tindie badge. I wrote about it on the Hackaday blog earlier, but the simple version is pretty much Jasmine saying, "Hey, we should build a Tindie badge for DEF CON". K. I didn't have my hands full at the time. Slash ess.

The Mk. 1 Tindie badge is just about as simple as it gets. There's a battery holder, a battery, and two flashing RGB LEDs. Some BMP hacking in Eagle makes for a great PCB, and a 'pin clasp' soldered to the back of the badge makes it... a badge. Or something.

Kitting and distribution of this badge went great, and the BOM cost was reasonable: $1.83 per badge at quantity 300. Great for DEF CON, and a potential to be a *great* bit of swag. A lot easier to lug around than a bunch of t-shirts, in any event. 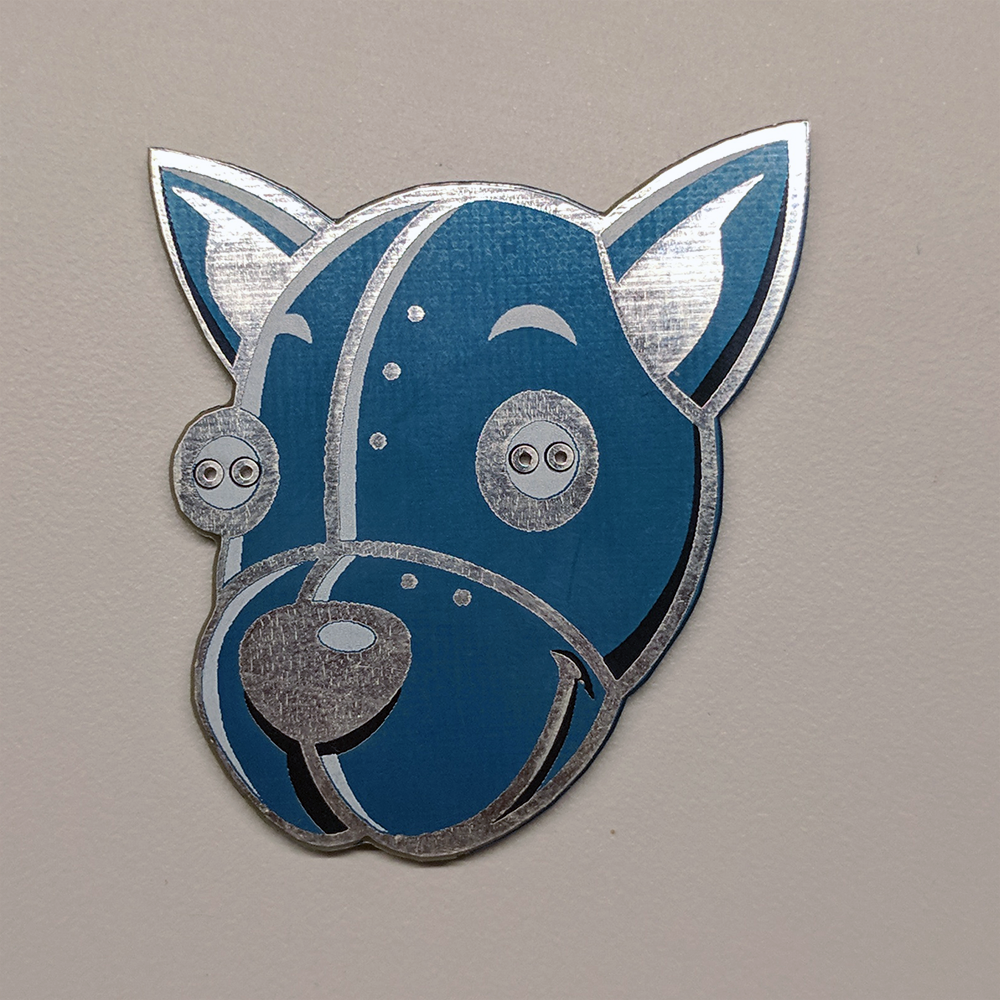 With the success of the Tindie DEF CON badge, we decided to make a few more up for our next event: World Maker Faire in NYC. Confident in our ability to put together badges quickly, our target quantity was 1000. A thousand badges, and only a month and a half to get it together. Not a problem.

The changes from the Mk. 1 to Mk. 2 badge were purely cosmetic. While using layers of copper, silk, copper resist, and mask do work to put art on a board, I wasn't quite happy with how the first version of the Tindie badge turned out. There wasn't a whole lot of difference between the dark blue and light blue, the eyes could have used more definition, and Tindie's rivets should look like actual rivets. This meant I needed to change some of the dark areas to tinned areas. Not a problem -- it's just playing around with Illustrator, BMPs, and Eagle.

The Mk. 2 badge for Maker Faire was a success, both as a bit of swag and from an engineering standpoint. Instead of the $1.83 the first version cost, the Mk. 2 version was only $1.23. We used the same suppliers for the parts, so really that's just a quantity discount. This is still a significant cost reduction, and considering how many stickers we give away at events, this is a very attractive bit of swag.

Was I happy with it? No. The plan to put tinned copper everywhere didn't pan out, and the original badge looked better. At the very least, the nose and ears should be dark blue. There's only so much you can mock up in illustrator without having a finished board in your hands. Still, we made 1000 for Maker Faire, and the cost per badge came way, way down. 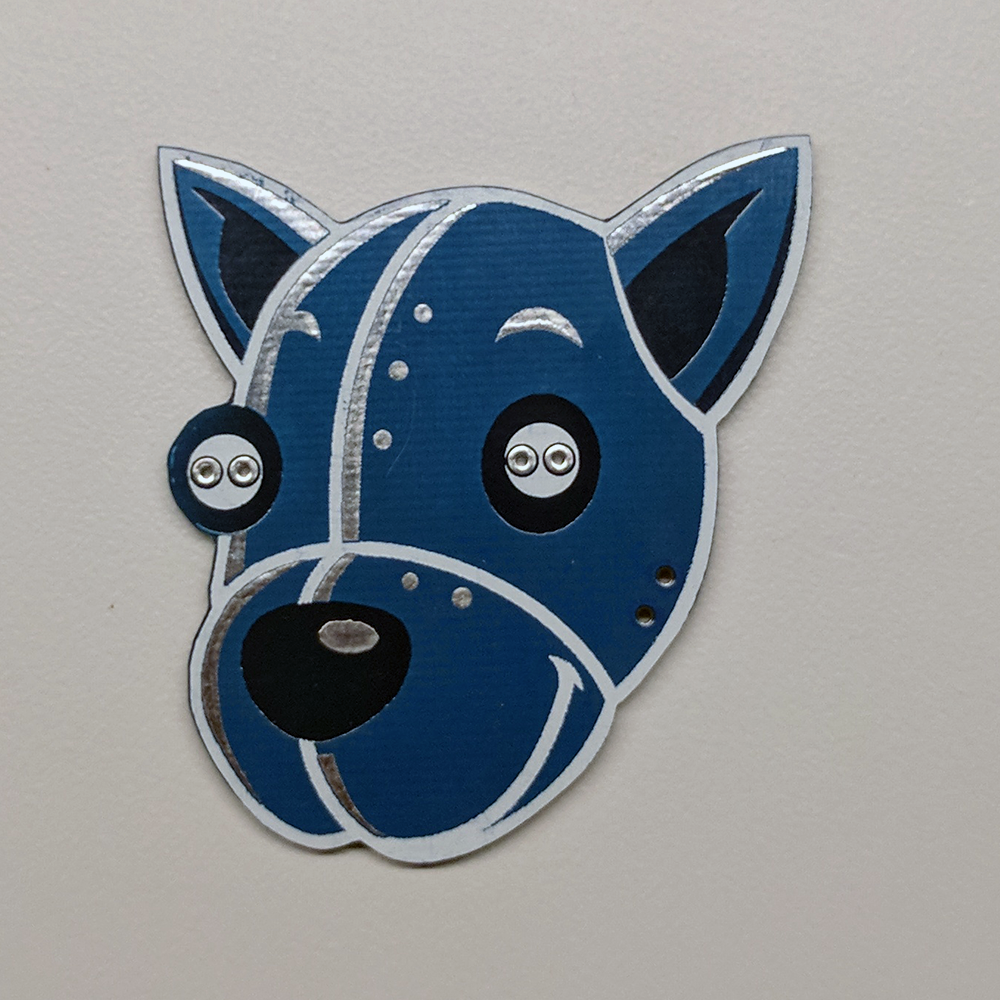 Our next event after Maker Faire was the Open Hardware Summit in Denver. After that, it's the Hackaday Supercon where we're expected to make it rain robotic dog heads. The most important issue to fix was, of course, the art. The basic idea behind the art was to refine the design, make the nose and 'inside' ear dark blue, keep the rivets silver, and use the white silk a bit more. I wrote another Hackaday post on how to do this art in Eagle, and that went together pretty easily. We're all happy with the results.

The Mk. 3 Tindie Badge is a major revision. We're doing actual, real, hardware changes. What's the biggest change? A switch. I've tested the Tindie badge, and a fresh battery will blink the eyes for days, but some people like to take the battery out for some reason. Whatever, we need a switch. 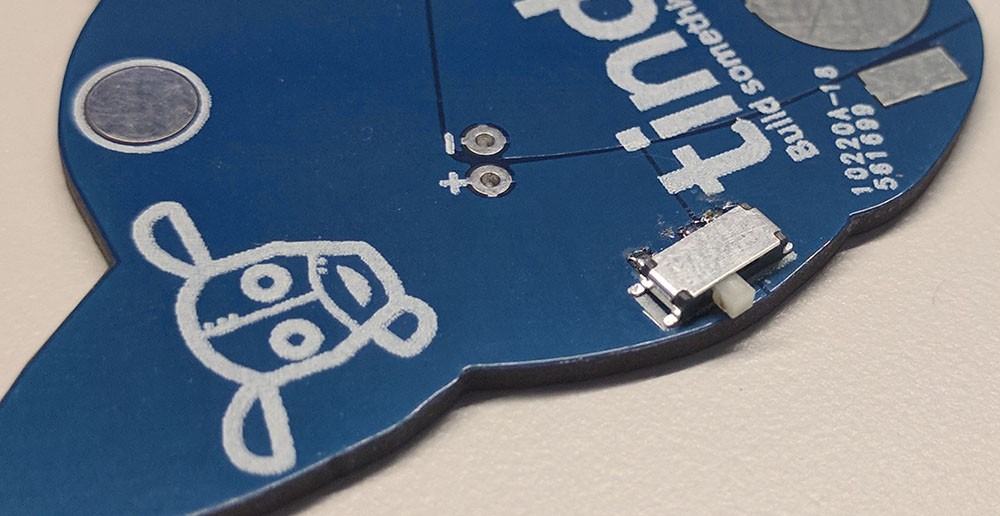 The requirements for this switch were simple enough. It had to be an SMD (so the front art wouldn't be messed up) SPST switch. Smaller was better, and as with all the components, we're looking for the cheapest option. We landed on an Alps switch from Mouser, available for $0.14 in quantity 1000. That's cheap enough.

With board art we're happy with and the BOM pretty much sorted, let's do a cost breakdown for 1000 Mk. 3 badges:

The total cost per badge, in quantity 1000, is $1.37, basically the same as the Mk. 2 badge, but adding a switch. Acceptable, but I'm still not happy with how much we're paying for battery holders and switches. We're going to roll with the Mk. 3 badge for Open Hardware Summit and Supercon, but I'm going to make a few changes to the BOM going forward.

We're not going to cut the BOM cost on the bags, tacks, or the LEDs. Those are already as cheap as they're going to be. Likewise, the price of the PCB isn't going to come down much unless we order in obscene quantities. Likewise, I shopped around for batteries before building the first one, and trust me, Amazon has really, really cheap CR1220 cells.

This basically leaves the switch and battery holder as the places where we're going to cut costs.

The first switch I found that fit the bill was from Alps, but quite a lot of electromechanical parts have a Chinese equivalent that's more or less the same. After a bit of searching, I found this guy on AliExpress. Take a look at the drawings of both:

No, they're not identical. The 'studs' on the bottom of the switch are different; the AliExpress switch has 0.7mm diameter studs, the Alps has 0.8mm diameter studs. If you really study these drawings, though, they're more or less the same. They're effectively interchangeable; if you make a part for one in Eagle, you have a part for both.

The biggest expense on the BOM is the board, and there's little I can do to change that. The next biggest expense -- by a large margin -- is the battery holder. Not the battery, mind you: the battery holder. This is just a tiny piece of stamped metal, and it costs $0.36 in quantity 1000. Unfortunately, AliExpress doesn't help me here. The vast majority of CR1220 battery holders from the usual Chinese suppliers are plastic, through-hole jobbies. I don't want that; they're bigger parts, they'll ruin the art on the front, and they're still pretty expensive at about $0.20 in quantity 1000.

The battery holders for the Mk. 1, Mk. 2 and Mk. 3 badge were from Digikey. They work, they're great, but you should always do a search on both Mouser and Digikey before designing something (or sign up for Findchips. That would have probably saved some money). Here's what I found on Mouser. It's a different part from a different supplier, and it's only for CR1216 and CR1225 batteries -- not CR1220 batteries.

After three revisions, we're happy with the art on our magnificent Tindie badge, and we brought the cost down and saved almost a dollar per badge. That's really incredible, and a testament to how much you can save just by seeing what options you have available to you.

What are the plans for the Tindie badge going forward? We've pretty much got the Supercon order lined up, and that'll be the last con we're going to this year. Next year, though, we're distributing Tindie blinky badges far and wide. These things are some of the cheapest swag we have, and people love them. It's a soldering kit, and they're much cheaper and much more easy to distribute than t-shirts. We're aiming for several thousand by New Years, and we're going to make it rain robotic dog heads.

Going forward, there are a few options for what we can do with the Tindie badge. I'm doing a few experiments with custom silk and solder mask, and I think this is the perfect platform to demonstrate a few techniques. The top of the list for these experiments is an Aladdin Sane Tindie badge, a Kiss Army Tindie, and maybe one with the Mike Tyson face tattoo. Or Chakotay. I always get those mixed up.

How we did the first revision

I have used some of those cheap SMD SPST switches in the #PewPew FeatherWing prototypes. They break after about 5 switchings — I had to throw them away and order more solid ones. Hope you will have better luck.

It's disposable hardware. It's only meant to last for a few days. Cheaper kits mean we can make more. At least that's the theory I'm going with.