Another hexadecimal display, this one is sans transistor for the extra vintage touch, and uses only Soviet-era parts

I think I've just found a possible solution to the problem I've re-discovered with the first prototype. I approached the problem from the wrong perspective but there is hope to keep the number of relays low, get all the 16 codes, but this involves more diodes. A bridge rectifier or something like that could work ?

Apparently there is one topology where the phantom segments are much dimmer, at the cost of two diodes per segment. The direct segment path has 2 diode drops, while indirect paths have 6 diode drops. The drop ratio is 1:3, so it's worth trying ! 4 diode drops would be around 2V (depending on current), which is pretty much garanteed to keep the phantom segments from shining. The trick however is to split the paths, two per segment. This would force me to rewire some parts of the diode array, but only that. 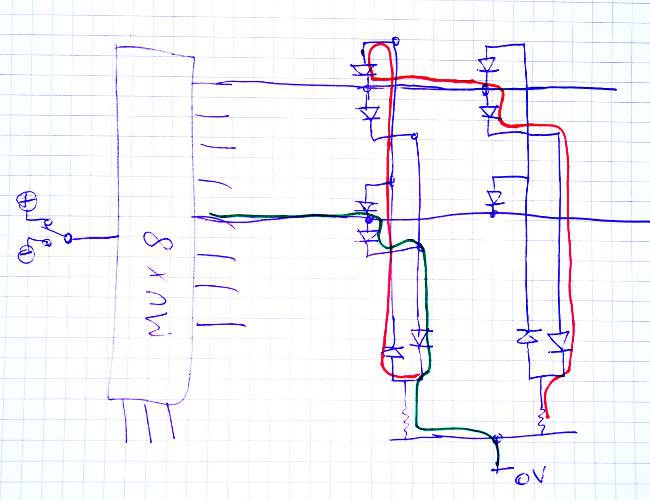 So YES it IS possible to make a hex decoder with only 8 relays (and 2 buffers). It is getting important because not only YGREC16 would need a significant number of displays, but the #YGREC8 also requires hexa displays as well. Octal won't cut it...

You can never have too many diodes.

It also follows immediately that you can never have too many LEDs.

I hope you'll enjoy the Russian touch, by the way, considering that the diodes, relays and Numitron come from Ukraine or Russia, and the module needs little more.