My first CPU (https://hackaday.io/project/12879-weird-cpu) was an 8 bit TTA (Transport Triggered Architecture). It has a front panel and sits happily on my shelf chasing LEDs in circles (such is the life of a simple CPU):

My second CPU (https://hackaday.io/project/13017-4-bit-ttl-cpu) was a 4 bit OpCode CPU. A bit of a disaster, I decided to get PCBs made rather than use strip-board. After 5 revisions (i.e. PCBs) I still do not have it working. I just do not know how many more PCB revisions I will need to get it working.

My third CPU design was a Subleq CPU (https://hackaday.io/project/25133-a-subleq-cpu). I quickly realised that it was too inefficient to fit into 8 bits so I moved to 16 bit. This meant I could not use a front panel for programming (i.e. a few hundred bytes is okay but a few thousand words is not!). The decoder started to get complicated as I had to add direct memory access for the programmer (i.e. an Arduino).

Subleq is also very cryptic. So I ported a simple compiler (https://hackaday.io/project/25583-simple-compiler) to export Subleq and wrote a Subleq assembler and interpreter for simulation.

This project too was abandoned as it had migrated so far from an interesting curio to a programming monster. I did learn a lot about compilers and what is expected from the CPU.

CPU 4 is a complete rethink about my home brew CPUs:

The usual approach is to use a ROM or a PLA to decode the OpCodes. I have not adopted this approach because I would like to option to convert the design into DTL (i.e. build a transistor CPU).

I did look at the possibility of using my TTA CPU to interpret OpCodes. It is possible but not well suited for the task. However, if the TTA CPU does not need to access RAM directly then the decoder logic is greatly simplified.

TD4 uses this OpCode approach to a degree (https://hackaday.io/project/8442-ttl-based-4-bit-cpu). TD4 also has access to immediate data (which is why it is so interesting) but the approach for immediate data is very primitive. Every OpCode has immediate data attached to it (very inefficient). So adding immediate data on demand would be very useful.

Here is the schematic for the decoder: 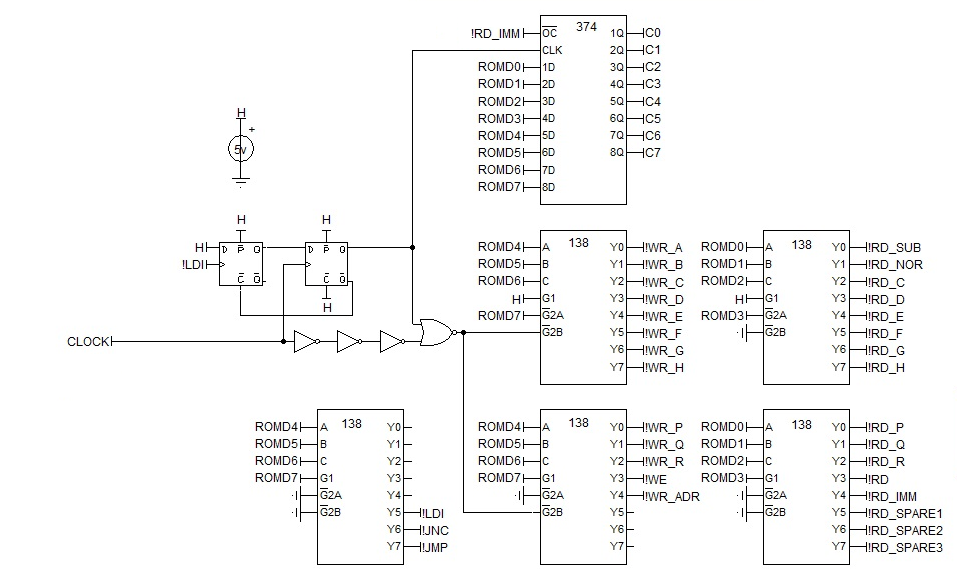 So what you will notice is that I have used 74LS138s to decode the OpCode [DST][SRC].

The !LDI logic blocks the write clock to all the registers (but not the program counter) and instead clocks the 74LS374 latch. This catches the next ROM address as immediate data (if the [DST] decodes to !LDI).

From the schamtic you should be able to see that the CPU can have up to 13 write registers and 16 read registers. 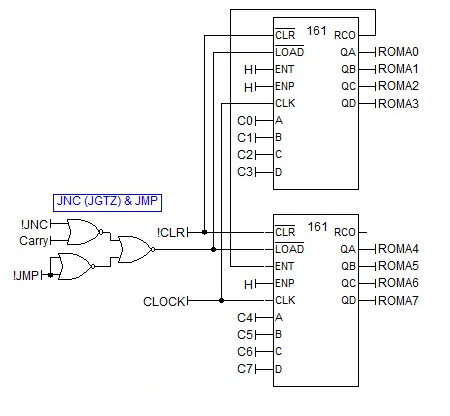 For the CPU to access RAM (i.e the user program), the general registers need to configured as read/write: 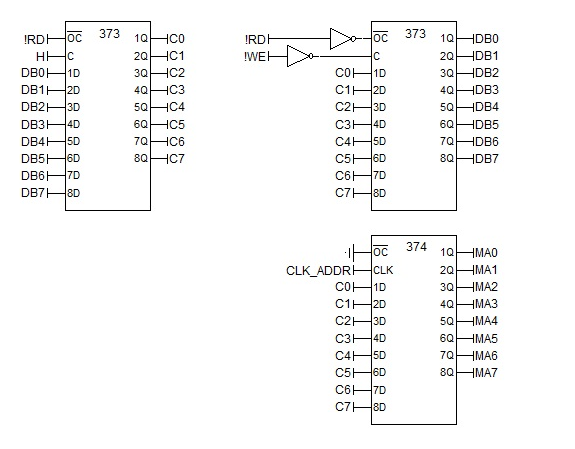 The ALU is similar to the Weird CPU but I use integers, subtraction and NOR instead: 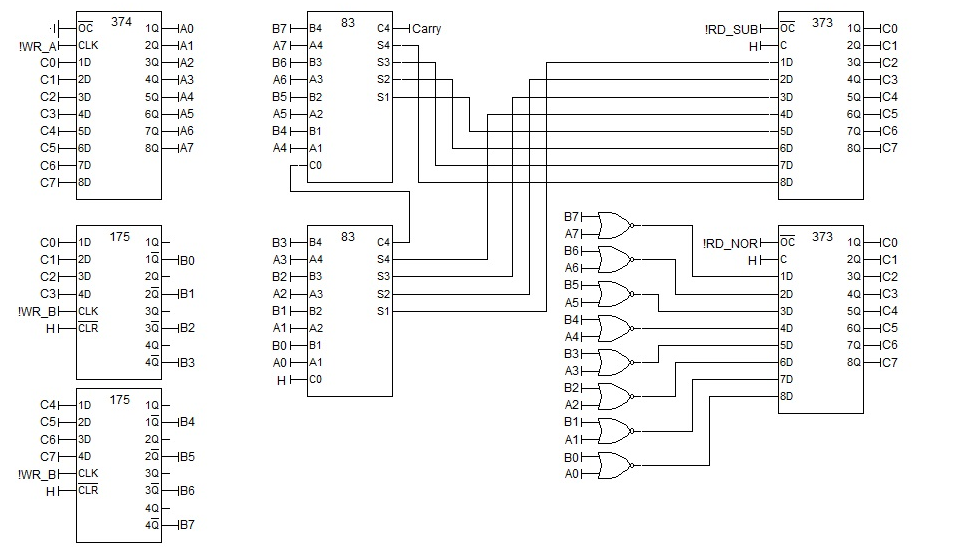 So here are the OpCodes (these have been updated since my initial post): 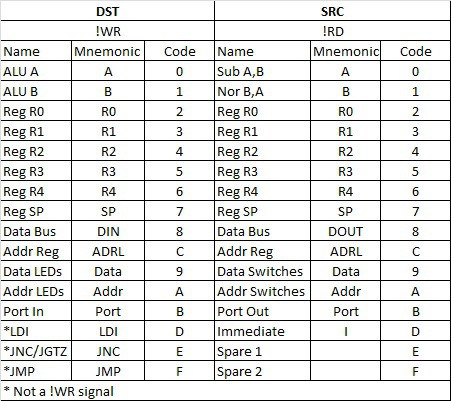 LDI is different as its source is the ROM so the [SRC] and be anything.

Another example is to increment the C Register:

The above code takes 5 cycle cycles. The Weird CPU (TTA) would take 12 cycles. My Subleq CPU would take 36 cycles.

Hi BigEd,
Yes and no. I reverted back to ADD and NAND, and to JC (rather than JNC).
It was slightly more efficient and I don't need integers inside a CPU.
I spent the day coding different versions of the monitor program and selected the option with the least number of code lines. I also un-inverted the input switch logic as well. Currently the monitor is about 57% of the Weird CPU (TTA) code and eight times faster, but that is inside the CPU.
Subtraction is Turing complete and well suited to next step up (compare etc.) but at the CPU level it does not really matter as I just use the NOT of the constant etc. in a test.
I was considering subtraction because I have written over a thousand lines of Subleq code that I could use for the OpCodes. But I need more ROM capacity for this. So rather than get too ahead of myself I have limited the scope of the project.
Regards AlanX

Fair enough - good idea to keep calibrating the machine against real code. I have a soft spot for Reverse Subtract as a primitive, but it hasn't yet made it into our CPUs...

Subtraction and Nor? Good choices! I like it already.

Microcomputer that runs without a CPU
Project Owner Contributor

Computer based on a homemade 8-bit CPU
Project Owner Contributor