Time to code the monitor program. Too late to use simulate RAM (unless I have no choice and even then a Nano does not have enough output pins), it is about getting the code to work first time. Yes, well if I am lucky! To help I will write the same monitor code is Pseudo C Code and as commented machine code.

Here are the updated OpCodes: 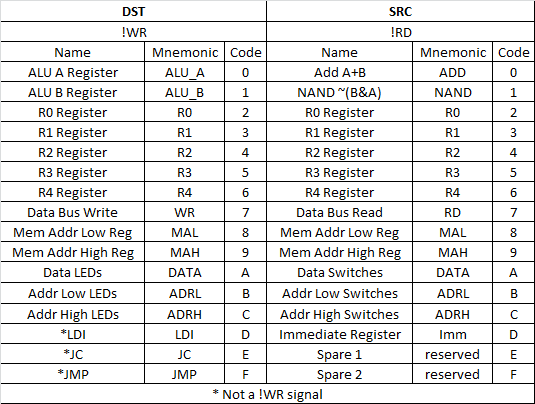 The main risk is that JC is JNC so I will double check: 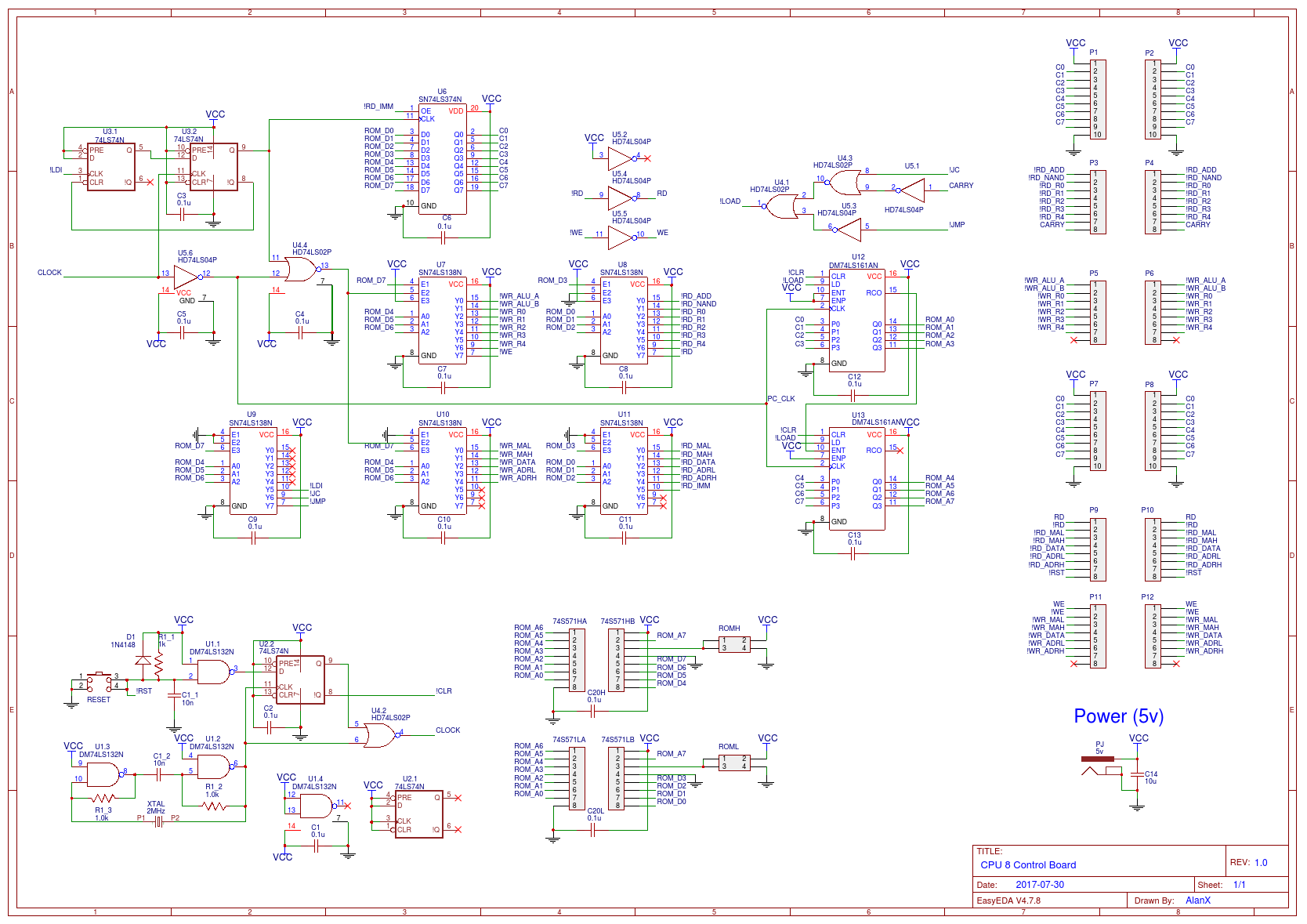 Started writing the emulator, its starting to get complicated with an 8 bit data bus and a 16 bit address space.

The programming of the PROM needs a rethink! The Nano does not have enough output pins to emulate/control the CPU and the micro-code is too big to get right the first time.

I think the immediate objective is to prove the CPU works rather than get the CPU working to final specifications. In order of complexity:

Here are the codes for the options: 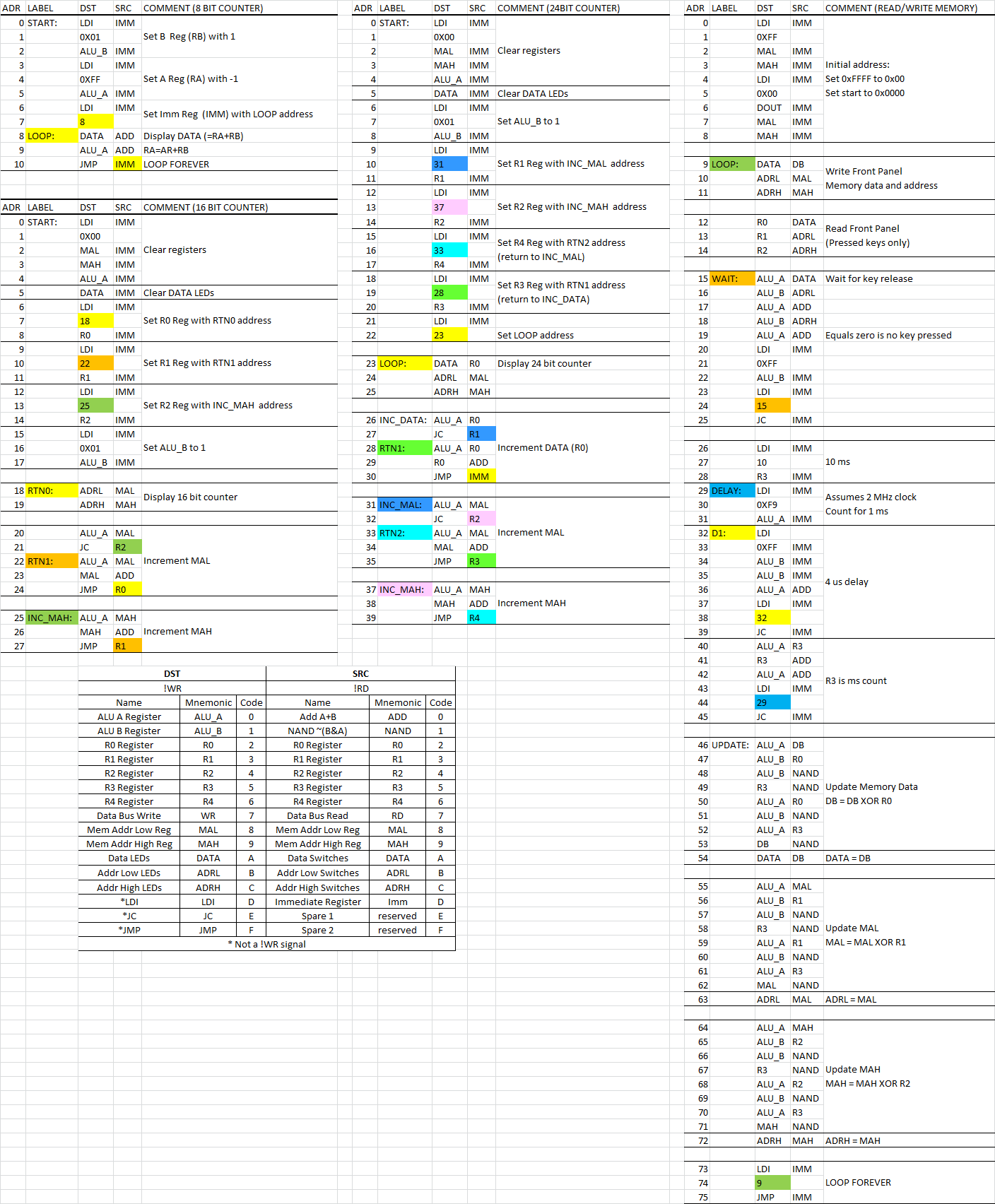 The cut down monitor code looks good to me. It is code I have spend some time working with. A successful run is all I want as the Control board needs to be rebuilt.

The next version of the control board will support a Flash PROM and a way of programming in-circuit. I will replace the Flash ROM with the TTL PROMs when all debugged (want to stay with the TTL style).

Now that I have worked out how to construct simple call/return (see the 16 and 24 bit counters), coding the CPU is more pleasant. I hate using JC when I need JNC (using JC and JMP) as it takes six instructions instead of three if using immediates).  It can be done but I will lose a register. Pleasant coding is winning at the moment.

In Circuit Programming of the Flash Memory

Rather than use two PROM which have to be programmed in a specially designed programmer, I want to in-circuit program a flash memory chip.

I can do this by isolating the flash chip with series resistors. Currently the PROMs have:

The value resistor is 1.2k:

The datasheet is rather conservative. Measurements suggest 0.20mA rather than 0.36mA (consistent with the LS-TTL schematic showing an 18k to 20k internal pull-up resistor). The maximum resistor in this case is 2.2k. To be safe I will use a 1.8k resistor.

Here is the schematic of the in-circuit flash RAM: 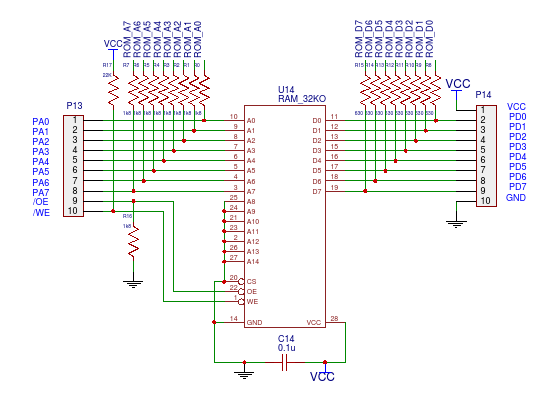 No it will not work! Here is another version:

JA is the Arduino Address and JD is the Arduino Data. The first 74LS04 will have to source up to 4.8 mA. As the input low current is only 10uA for the Flash RAM I can increase the input resistor values network up to 20 times. This circuit pull 640uA from the output:

The plan now is to:

I have already redesigned for JNC and JC conditional jumps.

What this CPU needs is a stack. The first version is a short (8 bit) stack:

A short stack and two free and one temporary registers seems to be all you need.

Another model is a full 16 bit stack with an 8 bit index (i.e. no free registers). In this case all operations use the stack. This model would be best for a simple compiler using P-Code or similar.

Some More Next Version Improvements

Now that I have written a short stack procedures for Push and Pop, I looks like I will move straight to an OpCode CPU.

With the last version of the Push and Pop subroutines, I called them with a call using the IMM (immediate) register and return using RTN (or R2).

In order to shuffle around the registers (MAL/SP and MAH mostly) I had to use the ALU for temporary storage. It occurred to me that I could use two of my three spare read slots to read the A and  B registers of the ALU, making using the ALU to temporarily store data more efficient (just two extra chips but less one for R4).

So ow my new CPU model would be:

The (micro-code) Call and Return takes 6 instructions to set up and one to return.

This is stating to get exciting!