You can see the board on OSHpark, but it is currently untested! I have ordered in 0.8mm thickness just to add to the tiny size

You can have a look here

I think I found your limits on silkscreen resolution. Came out a little fuzzy (tiny Font)

Was it super-swift service?  That uses an inkjet process that is about 500 dpi to have a faster process.  The normal service uses LPI which is 1,000 DPI.

it was the normal service, but you did email about the fab house making 1.6 instead of 0.8, so maybe the replacements were super swift? Its not a problem, i was pushing it with the wall of text in tiny font 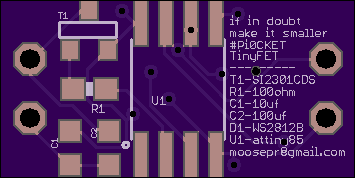 Not had chance to check but it was more a case of what fits rather than what will actually print. I also get lost in the world of zoom