From discovery to commercial product.
Turning an earphone phone into the most affordable smart stylus.

Around 2.5 years ago, when I was playing with the volume slide on the earphone, I accidentally discovered a super simple(cheap) smart stylus circuitry has hidden inside an earphone all these years. The logs, https://hackaday.io/project/26225/logs recorded the steps and choices that were made while turning a discovery into a commercial product. The result is SonarPen. For those who are interested in the product, a US$29.95 smart stylus of your iPad, please go to www.sonarpen.com.

I like digital drawing, and it would be cool if I can draw on the go. I want to develop a smart stylus that has all the standard features and a selling price that undercut everyone by at least 50%.  (66% less compare to an Apple Pencil)

The de facto standard of a smart pen is to have the following functions (if not all) :

So my smart pen must have all of the above and remain affordable. The earphone solution took away the all expensive electronics, controlling circuit, Bluetooth, rechargeable battery and replaced them with a circuit that communicates with an iPad through the standard audio channel. To detect the pressure, the iPad sends a standard wave form to the circuit, the wave form pass through a variable resistor which changes according to the pressure applied on it. The modulated wave form is then sent back to the iPad for comparison.

Other than cost, the earphone circuit is better in terms of:

- Almost all the iOS devices have the connector (the lightning to 3.5mm converter should works)
- Protocol (driver) will be simple, almost like how a modem works.
- Best of all, it is powered by the iPad itself, so no charging ever.

If you are interested in the Making of the SonarPen, don't forget to visit the logs. 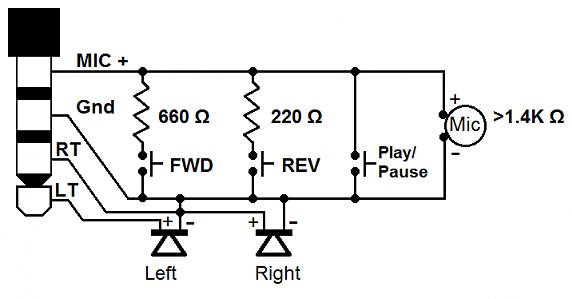 Very cool! how do you track  the pens location?

We combine the change of pressure and timing to tell which one is the pen and which is finger (or palm).

Excellent Idea, and nice product. The day it works on Android you have yet another customer :-)

Thank you. The pen actually works for Android and Windows tablet. We just don't have the resource to write the driver yet. It will work as an ordinary stylus on these machine until the driver ready.

The EVI is at-risk of becoming extinct. Explore the development of a DIY EVI Windcontroller for survival of this great instrument
Project Owner Contributor

The WiPhone project is an open source mobile IP phone. WiPhone is intended to be hackable, modular, cheap, and open, while remaining usable.
Project Owner Contributor