A communicator for non-verbal disabled people.
An acronym for SWitch to AlphaNumeric.
An auditory scanned alphabet, message creator.

Development of an augmentative and alternative communication (AAC) device for people who can't talk or see. An android phone running the SWAN app says the alphabet, the user selects letters to form a sentence. Selection can be done using any AAC switch, via SWAN's electromagnetic interface. Selection is also possible using only the phone's internal sensors, including sip & puff capability. The message can be read or can be sent as a text message. SWAN is completely open source, the app will be free.

SWAN will enable someone to communicate, who, through disease, injury or approaching death, can't talk, see or write. If they can hear, and are able to make a movement, they can use SWAN to write a word or message. Instead of being trapped, unable to say they're thirsty, or that they love you. The incommunicado.

A video introducing SWAN is viewable via the link below.

SWAN enables severely disabled folk to communicate their needs and thoughts to their friends, family and carers.

It consists of a smartphone, an electromagnetic interface module, a switch and a pair of headphones. 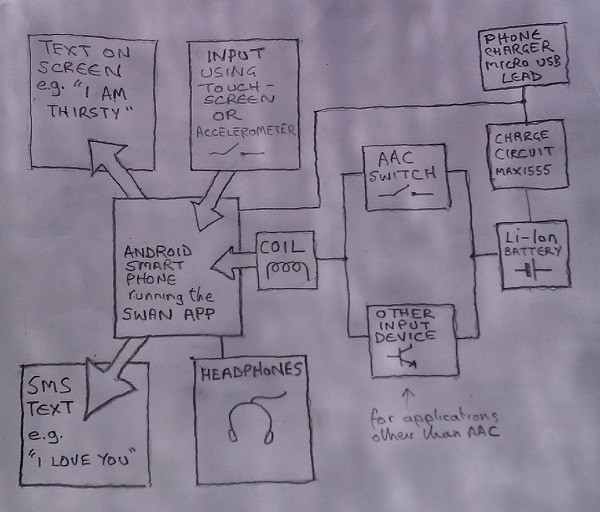 SWAN will enable someone to communicate, who, through disease, injury or approaching death,can't talk, see or write. If they can hear, and are able to make a movement, they can use SWAN to write a word or message. Instead of being trapped, unable to say they're thirsty, or that they love you. The incommunicado.

SWAN is an assistive communication device for severely disabled non-vocal folk; individuals who have a neurological or neuromuscular disorder that result in loss of speech, sight, writing and typing ability. e.g. -

My interest in developing SWAN goes back around twenty years, when my friend's mother was dying of Motor Neuron Disease. His accounts of the increasing difficulty of communication with her were harrowing. Some years later, I became very aware of the need for a communication device when my father and sister each had brief lucid moments during their last days of suffering cancer. I'll never forget the joy I felt, when my questions where answered by a squeeze, or a slight movement, at a stage, so close to death, where it was easy to assume they were comatose.

These responses, however, indicated that there was a possibility that they had something to say, but couldn't due to the disease progression and medication. There is a need for a communication device which is simple and easy to learn how to use, as time may be very limited.

It should be free, and obtainable in minutes. That's SWAN. A smart phone (which can be obtained very cheaply second hand, or indeed borrowed), running a free "app", speaks the alphabet at a variable rate (selected on set-up by the carer). The user selects letters, either using the smartphone or an external switch, to construct a message.

The auditory scanning method of creating a message is very time consuming, but the alternative is no communication at all.... I'm trying to speed up the scanning process , see here.

The user can edit and listen to the message being constructed. An auditory menu of commands allows the user to do several things when the message is finished-

The user could build up a store of messages, or just words, for future use.

Those without the dexterity to use the phone's internal sensors for letter selection can use any commercial switch specifically designed for use by the disabled. AAC switches are designed to be used by those with very limited dexterity. They plug into the SWAN electromagnetic interface - a small circuit board which influences the phone's geomagnetic sensor. More on this can be found here.

- a communicator for non-verbal disabled people.

- an acronym for SWitch to AlphaNumeric.

The SWAN electromagnetic interface, being an extremely simple, inexpensive and non-intrusive method of connecting the real world with a smartphone, has uses apart from a communicator, which are detailed here.

The full documentation of the SWAN project is at http://aacswan.blogspot.co.uk/

Roger Curry wrote 09/10/2014 at 11:16 • point
Hi mrobinson801,
Please contact me by email. We can discuss how SWAN can help the man you're caring for. I can send you an app that may be of value to him, if he's willing to test some features. My emai can be found on this page of my blog -
http://aacswan.blogspot.co.uk/2014/08/contact-details.html
Kind Regards,
Rog

mrobinson801 wrote 08/20/2014 at 10:50 • point
A very worthy project! As a full time caretaker for a man with severe cerebral palsy, I would be very interested in trying this out for situations away from home (he does have a head switch operated synthetic speech computer at home...ca. 1999!). I also like the implementation of statistical ordering for letters; my own method of unaided communication involves slowly stepping through the alphabet (starting with/prioritizing vowels is either helpful or confusing) and watching for a head nod to accept each letter...a very tedious and error prone endeavor. I will gladly report back with feedback once I try this out

Roger Curry wrote 08/20/2014 at 11:41 • point
Cheers mrobinson801,
This feedback is exactly what I wanted from joining Hackaday Projects. I will be in contact in the next few weeks, about you beta-testing SWAN. Unfortunately I'm going to be away from internet access from sat 23rd, for a week or so, gold panning and looking for pyromorphite in Scotland. When I get back, we'll see if the project has got through to the next round, but be assured that development of SWAN will continue, regardless of the outcome of this competition.
Thanks very much for your interest,
Regards, Rog

The 2015 Hackaday Prize
A device + app that allows you to access features of your phone while driving, without taking your eyes off the road.
Project Owner Contributor