A companion cube for makers, collecting pictures, audio, and text during a build, and serving up a build log web page to those nearby.

A voice activated, web enabled active project repository that reduces the friction of documenting a build. It is a device that is left in or near your project as you build. You use voice commands to interact, taking audio notes or taking pictures with a phone app that sends to the Build Logger's embedded web server. Build Logger verbally reminds you to take pictures, make audio notes, even do a few short text blurbs. It arranges all of this information into a timeline, creating a web site that it serves to those nearby. Its SD card can be used to upload the generated static HTML5 pages to any web host for easy publishing.

The overall system design is: 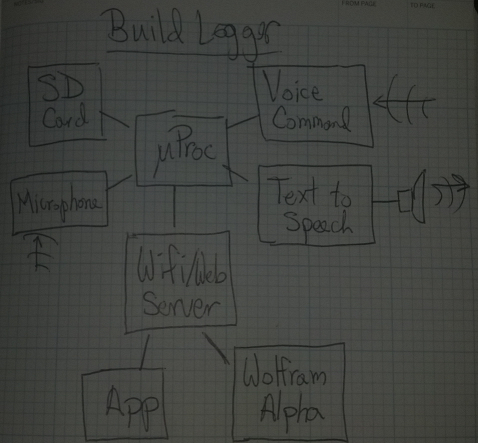 Speech is the primary I/O between the Build Logger (BL) and Maker. Voice commands provide hands-free functionality. Text-to-speech gives eyes-free feedback. For instance the combination allows you to check a FET pinout without taking your eyes off the circuit board, as if asking an assistant. Another set of commands can run timers, letting me move onto soldering or machining while caulk sets. More elaborate commands and data can be done by letting Wolfram Alpha do the thinking.

Pictures take a little more doing. There's no point in recreating the camera system on a smart phone or tablet, so let's leverage it. A simple app will take pictures and send them to a nearby BL using the BL's embedded web server.

Text notes can also be captured via an app, though realistically it adds overhead to collect much information on a phone keypad.

The BL can record sound as well. Voice Commands trigger a short recording, allowing the Maker to call out part numbers or make short notes such as "Use number 10 wood screws but do NOT countersink the hole, we're going to use the resulting edge later." Again, like asking an assistant to take down a note. I think these audio notes can be spliced over photos to make a build movie in a future version. In the near term, they can be played by the Maker as fodder for properly typed posts.

All activity during build sessions is logged, including all text-to-speech, voice commands, and notes about when pictures were taken. I often need access to small notes during build sessions. For instance, I remote control a data collection system that sits inside a vacuum chamber. It records data at a high rate and stores it to a SD card for later retrieval, all out of reach within the vacuum chamber. It prints the file name (just a number) (via Bluetooth serial) and leaves it to me to remember what the overall test conditions were. Being able to verbally note that "file 1234 is test 8" keeps my eyes on safety critical gauges.

Non-Makers see the Build Logger as a web server hosting a timeline of the project's pictures, audio notes, and text. Anyone within range sees the BL's short range WiFi access point and can leave comments on the log. This makes the BL part of the project's full life cycle - from inception through display and use.

People not nearby could still see the log because the BL actually creates static HTML5 web pages on its SD card. This reduces computation burden serving files and makes it incredibly simple to publish the log to the world through copy-n-paste of a whole directory to any web server.

To me, it's really the connection between the Build Logger and Non-Makers that makes this project so exciting. I love the idea of a project that becomes self-logging and self-advertising.

PointyOintment wrote 08/20/2014 at 19:55 • point
I like the idea but I'm not sure about your choice of hardware. Maybe a Raspberry Pi would be more effective. If you have a spare Mac, use that; they have a built-in extensible voice command system.

wes.faler wrote 08/20/2014 at 19:59 • point
Did not know that about the Mac. Still too pricey, as I want to leave one Build Logger with each project, as if it were a component. Thanks for the Raspberry Pi encouragement - I admit I don't know much [yet] about their features. Their size and price is right though.

Don Smith wrote 08/20/2014 at 11:22 • point
Hackaday.io should be open as well as our projects. If Hackaday.io has an API you could post project logs directly from the Buildlogger.