Two circuits to detect the presence of mains power (240VAC and current) as a Raspberry Pi GPIO logic level.

A 600 foot deep well provides water to my house. The well only produces 8 gallons/hour. Therefore I also have a 1700 gallon cistern to store the water before it is pumped into the house for use. There is a float valve that turns on the deep well pump when the cistern level drops to a certain level below full and turns off the deep well pump when it is full again. The pump is a 1hp 250VAC induction motor.

My project is to monitor the status of the cistern to make sure that it doesn't run dry. I thought that the easiest way to do this would be to monitor how often, and for how long, the deep well pump is running. I assumed that simply detecting a voltage applied to the motor would be a good indicator of this, so I proceeded to design a circuit for detecting a 250VAC signal and presenting to the Raspberry Pi as a GPIO logic level.

1. Safety: 2500-3500V galvanic isolation between motor circuit and RPi circuit.
2. Cool Operation: low power dissipation…
3. Simple, two-wire interface: GND and GPIO signal to the RPi. No power supply signal required.
4. Small size - it has to fit inside the well "pump-saver" box that is mounted on the garage wall, and it won't be the only circuit in the box.

These circuits should be evaluated for failure effects to see what bad things happen when components fail. I did some investigating of how and why electronic components fail. Here's some of what I found: 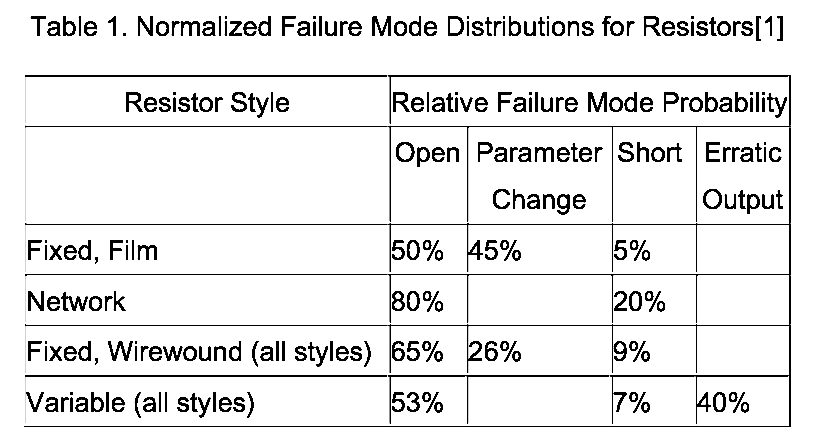 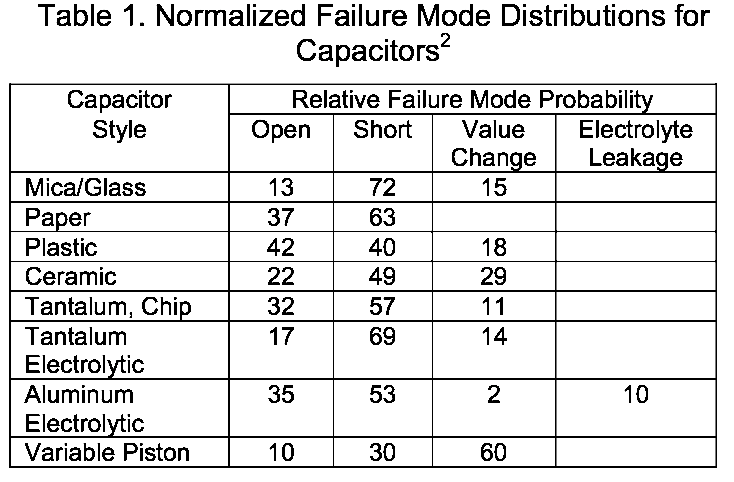 Capacitors normally fail with a short circuit. Film resistors most likely fail with an open circuit, but can fail just as often with a parameter change, and only fail shorted 5% of the time.

Only use components rated to withstand the electrical environment to which they are subjected. Design for Reliability guidelines suggest that resistors be derated to 60% of maximum operating limits for voltage and power dissipation. This was an eye-opener for me. This is serious stuff and a failure could cause a fire or other serious issue that places the occupants of the house in danger. It gives credence to the people who say "Don't play with the mains."

This is the circuit that I initially implemented: 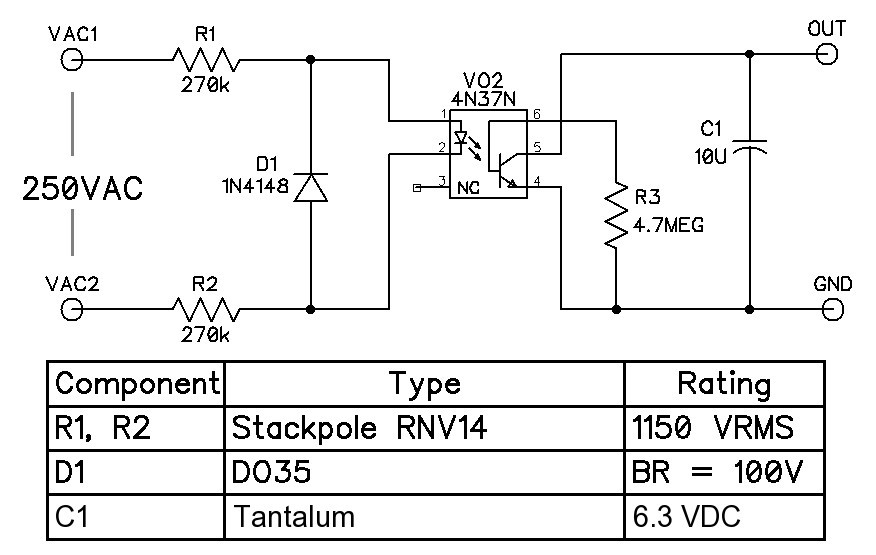 Vishay has a handy data sheet that covers multiple general purpose transistor output optos - you can find it here. The data sheet specifies the transfer characteristics of the coupler with a forward current, IF, through the input LED @ 10mA. This is a problem. If the input resistors must generate 10mA with 125VAC across them then they will need to be rated for 2 Watts!

In order to make R1 and R2 larger the opto-isolator has to be operated at lower currents. I selected the 4N37 because its minimum Current Transfer Ratio (CTR) is 100%. There is not a load resistor in the circuit - it is provided by the RPi. The GPIO pull-up resistor is 50K minimum. Therefore the 4N37 must sink 3.3V/50k = 66uA max.  And we'll increase that by 50% to make sure that the 4N37's output NPN is fully saturated (producing a low output voltage). So we now know that the output current is 100uA. The CTR  of the 4N37 is estimated, using Figures 3 and 5 and iterating a bit, to find IF produces a CTR of about 0.15. (Operating...

Hi Bud, adding an indicator LED would be sometimes helpful - would the 4N37 still switch if there would be a LED in series with the opto? Thx

Hey Bud, looking at the pcb, I'm guessing you built this in 2013. Is it still working fine or would you change anything in the circuit to make it more reliable?

Also have you measured consumption of the detector? I will need to operate at least 50 of them. I have one of these chinese voltage detectors modules with that big resistor and it consumes around 0.3W which I find quite high.

Yes, It's still working. There is some strange behavior and I don't know if it is coming from the software/hardware (and older Raspberry Pi Model 1) or from the circuit itself. The only change that I would consider is changing the output 10uF tantalum to a ceramic. I'm thinking that the tantalum might be leaking and causing problems. But I can't confirm it.

No, a tantalum cap can not leak. But it can burn, if it gets a voltage spike. And for increased reliability you should derate it to 50% of it's nominal voltage (10V type in a 5V circuit.) An MLCC cap is the more reliable and cheaper alternative. But they suffer from reduction of their capacity by DC bias, down to 30% at rated max. voltage. This is reversible but should be considered, if you really need 10µF.

I would use an additional dropper capacitor to reduce power consumption. Something like 100nF should be OK, for increased protection the capacitor should be an "X" rated type. With an additional resistor from 1k to 4k7 to avoid current spikes.

Also it would make sense, to use a photocoupler without base connection, then the 4M7 resistor is not necessary. One part less in the FMEDA

The tantalum cap is rated at 6.3V and operates with a max voltage of 3.3, so it's pretty close to 50%. I'm aware of MLCC voltage bias. I don't know what you are talking about with "an additional dropper capacitor". You should provide a schematic. I like the base connection of the photocoupler -- it lets me decide the amount of leakage current to accommodate. Send me a schematic with your "improvements".

I think by dropper capacitor he meant a capacitor in series with resistor like in transformerless power supplies (https://hackaday.com/2017/04/04/the-shocking-truth-about-transformerless-power-supplies/ - second picture, 100R in series with X2 cap). I am guessing it should replace the 270k's but I am not sure if both should be replaced or just R1 and the bottom R2 to be removed? Would like to see the schema too.

Btw. what do you mean by strange behavior?

The strange behavior is that the output sticks low for extended periods (according to the Raspberry Pi.) I haven't been able to verify it with a voltmeter, so I don't know if it is from the detector or some strange software issue. I have ameliorated it by detecting if the GPIO is held low for more than X minutes and killing the process and restarting it. This seems to keep things going longer before human intervention is necessary -- about every 3 months.

[Edit 2021-04-12: The cause of the strange behavior revealed itself last week. The pump was slowly going bad -- wouldn't run even though voltage was applied. The pump finally gave out last Thursday. The new pump has different run times, so I need to recalibrate the run time with gallons pumped. Since the new pump was installed there has been no incidents of "strange behavior.]

Ok, cool, good to know that the culprit was the pump and not the detector.

I put the gerber files for the PCB in the files section. Sorry, I did not get a notification that you had made a comment.

Would you be so kind to share the PCB design file(s)?

A 6 Amp supercapacitor charger, and a small tutorial on charging
Project Owner Contributor

Yet another automated watering project.