I'm building a 3d printer which makes things out of steel.

There are 3d printers for metal out there, but they are very expensive.

This project aims to radically lower the costs of 3d metal printers by employing a novel process to melt small bits of metal together based on TIG welding.

Current 3d metal printers work by using a laser or an electron beam to melt layers of metal powder together:

This one works the same way, except it replaces the dangerous laser / expensive electron gun with a custom built pulsed TIG welder. In the diagram above, the only differences are that the laser beam is replaced with a tungsten electrode, and the fabrication piston is connected electrically to the TIG welder.

The advantages of using TIG welding instead of lasers / electron guns are:

-Cheaper. Right now, I can pick up a $200-$300 welder at harbor freight and weld random things together all day. I doubt this or any laser-based machine will get too far under ten grand given all the logistics of managing metal powder* and the XY table, but that's a hell of a lot better than a million bucks.

-Safer: I'll admit that I get shocked by my prototype on a regular basis. However, I have to touch it to get injured. With lasers, you can get blinded from across a room if something goes wrong.

Ten years ago, 3d plastic printers were tremendously expensive and not widespread. Now, anyone can spend a couple hundered dollars and build or buy one themselves.

Right now, 3d metal printers are in the same spot as plastic printers were 10 years ago. A high end market exists, creating custom hip implants and aircraft parts. But there's no low end. No one can buy a 3d metal printer for less than about a million dollars, and there is no plans available for a 3d metal printer with workable resolution.

I aim to change that, in two ways:

2. Open sourcing as much as I can get away with.

I'm a huge fan of open source. However, investors love to hear about a company's unique  IP which secures them an advantage. Honestly, I'm torn about this. I'm also not a lawyer, and have spent far more time trying to build this thing than think about business models. At the end of the day, I want to make sure that:

a) I can make a business out of this, without resorting to locking down the device and charging people insane amounts of money for proprietary feed material cartriges.

So in conclusion, I want to open source a bunch of stuff, but may not go 100% open source everything so I can present a compelling case for investors. 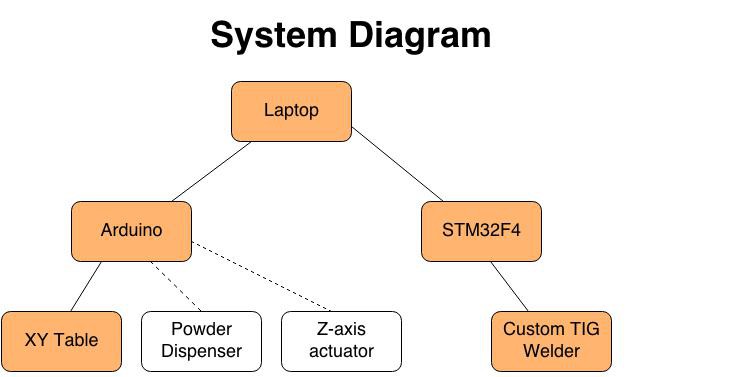 Note: so far I've built everything in orange, and it all mostly works. The stuff in white with the dotted lines I haven't started to build yet.

-Laptop: this talks to both the xy table and the stm32f4, telling the xy table where to move and the welder when to zap the metal. Hopefully, in the not-too-distant future, it will accept .stl files.

-X/Y table / build platform: This consists of the cylindrical build chamber platform, with an XY table above which holds the electrode and an argon gas line. Currently, the steppers which move the xy table are controlled by an arduino.

-The custom TIG welder: this is a custom designed dc pulsed tig welder, with current control provided by an stm32f4 microcontroller.

-Powder* Dispenser: I originally planned to have a servo controlled hopper and "bulldozer blade" system to lay down new layers of metal powder*. However, I realized that this also happens really infrequently, and can therefore be ignored for now while I focus on more pressing issues. Also, the laser cut parts I designed for this don't fit at all. whoops.

-Z-axis actuator: This moves the plunger holding the partly printed part downwards after a layer completes. I intend to automate this some day, but given how infrequently the z axis needs to be actuated, I'm leaving this as a hand-turned wingnut for now.

*I'm going to call it powder, but the stuff I'm using now (a blasting abrasive product) has a far higher size than atomized steel powder I've played with in the past.

I think this is bed idea with tig welder becase ,when you will try to weld the powder every particle will glue or bond to the TIG torch this is some kind of magnetism , ask people wich weld widh TIG every day

MetalicaRap will soon be the world's first self-printing 3D metal printer. My project will one day let it print its own integrated circuits.
Project Owner Contributor

Hackaday Prize 2019
This is a design for a low-cost extruder for printing objects directly from recycled plastic flakes instead of using filament.
Project Owner Contributor