Some projects that I am watching

Current smartpens are not very convenient to use. Most are quite bulky, and all require either special paper or a base station that clips on to the page. NoteOn aims to be a better smartpen; one that is slim, wireless, and self-contained. The pen uses inertial measurement to track its movement, allowing it to be used with any notebook, post-it note, or napkin. Notes and sketches can be sent to a mobile device over Bluetooth, and from there to a cloud service like Evernote or Google Drive.

NoteOn development is currently on hold. So far, two prototype PCBs and one case have been manufactured, and firmware drivers for all the peripherals except the Bluetooth transceiver have been completed.

The goal of the NoteOn project is to create a smart pen that is better than the ones currently on the market. It should be small, wireless, and self-contained. 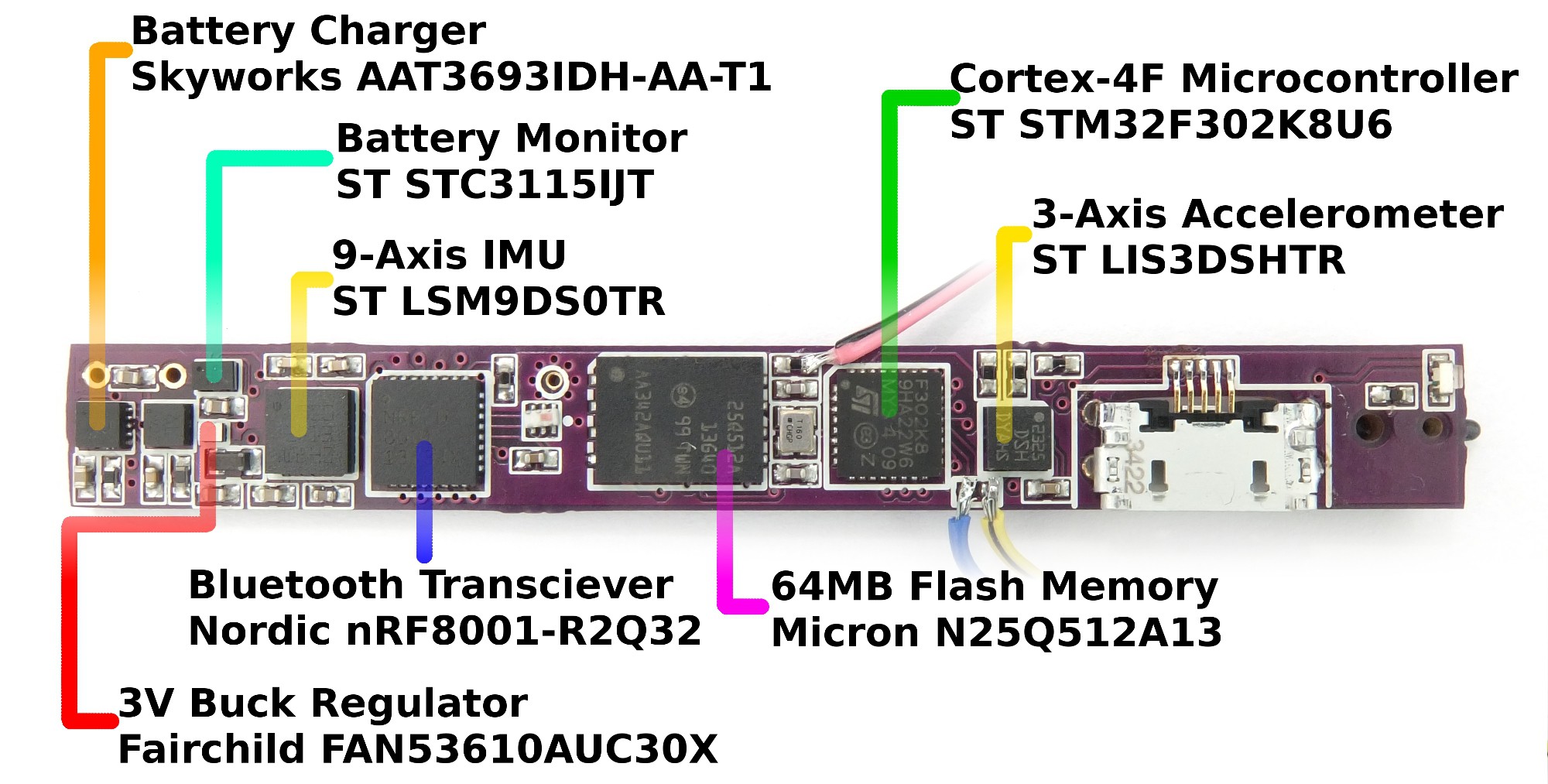 For Bluetooth 4.0 connectivity, NoteOn uses the Nordic nRF8001. It connects to the microcontroller over SPI. Unlike many Bluetooth interfaces, it doesn't have an internal microcontroller that needs to be programmed, making it a good fit for a system that already has a powerful uC. The Bluetooth antenna bears mentioning: I don't have the skills or equipment to design an antenna matching network, so the output of the balun is fed directly into a piece of wire. The RF performance is undoubtedly horrible, but I think it will work well enough for the prototype.

Also on the SPI bus is the Micron N25Q512A13GF840E, a 512Mbit (64Mbyte) NOR flash memory. I would have liked to for NoteOn to have more memory, but most flash chips are too wide.

Power is provided by a GoldPeak GP0836L17 170mAh lithium battery. (This battery is not available from GoldPeak, but clones of it are marketed as replacements for the Sony MH-100 headset. See BatteryBob #201747 and various sellers on Ebay.) This was the smallest diameter lithium-ion battery I could find. Although NiMh batteries are more commonly available in these small sizes, their low voltage makes the power supply design difficult.

The battery is charged from USB power by a Skyworks AAT3693IDH-AA-T1. Power is provided to the system through a single 3.0V rail generated by a Fairchild FAN53610AUC30X, a 3Mhz buck regulator in an exceptionally small 6-CSP package. A dual diode powers the regulator from the USB when it is available. (My first iteration of the design used a fully integrated diode, charger, and regulator IC. Unexpectedly, discrete parts took up less space.)

The battery voltage is monitored by an ST STC3115IJT Li-ion gas gauge. It connects to the microcontroller over the I2C bus.

No provision is made to switch off the power rail when the pen is in sleep mode, so sleep mode is achieved by putting all the ICs into their low-power states. This is something I'd like to address in the next design revision.

A single momentary switch and blue LED are the pen's user interface. The switch turns the pen on and off, and the LED lights...

This is an exciting project. I guess it's time for you to get up and get the job done.

This is very interesting and though provoking.You must be very proud to design this.You have created thousand possibility of extending this work.Thanks for sharing your efforts.

Far above from being just commendable.

webwicht wrote 09/23/2014 at 17:52 • point
Hi Nick, you did a great job with this project and I would really like to have one pen and work on the firmware. Although I am not sure if the resolution is sufficient for the intended purpose the device has certainly potential for other things. I was thinking of a 3d air mouse or a level for a drill . To me it seems that one needs another reference system to compensate drift of the accelerometers. At which point you got stuck? What was the difficulty that made you to stop this wonderful project?

Nick Ames wrote 09/24/2014 at 07:36 • point
I put NoteOn on hold because I'm tired of writing and debugging the firmware. I ran into a lot of small issues that slowed down the speed of development. Programming is my least favorite aspect of embedded development, and I can only do so much before I become burned out on a project. Unfortunately, that happened before I could make NoteOn fully functional.

While I'm really impressed with your hardware skills, I'm very dubious that the pen will be able to interpret/replay notes with any accuracy. I prototyped multiple similar approaches without any success in extracting legible information. Have you tested the output of the pen? Can we see what that looks like, graphically?

I'm not trying to be a downer, I guess I'm hoping you found a solution to the problems I was encountering.

Suckiden wrote 09/22/2014 at 13:21 • point
Very interesting project. Do you think your calculations will be so accurate that is possible to lay down the pen for a minute and return later to you paper still knowing where the pen tip is?

Edi Eco wrote 09/22/2014 at 13:08 • point
You have a wonderful project! This smart pen is my dream, I really would buy one for my personal use. I'd like to ask if you have started the mathematical modeling to process the IMU and accelerometer data, noise filtering, etc. Thank you and congratulations!

Pixel Pirate wrote 09/01/2014 at 21:49 • point
This is really cool! I was thinking about something like this the other day but couldn't figure out how to accurately track the movement of the pen, but you're idea is rather brilliant!
Tell me, how accurate is it with translating movement into words?

PointyOintment wrote 08/20/2014 at 19:23 • point
This looks really cool! I never thought of using and IMU for tracking writings with a smartpen. What's the reason for the redundant accelerometer?

My attempt to add inputs and outputs to the Robomaster S1 platform.
Project Owner Contributor