A laser-cut wooden TARDIS model that plays audio and pulses its lights when you snap your fingers!

This project started off with the simple idea of assembling a laser-cut wooden model of a TARDIS I bought and spiraled out of control until it had sound-activated lights that pulsed in time with audio.

To be fair, if I could use the TARDIS to go back in time, I'd probably do it all over again!

How did I go from simply wanting to assemble a wooden model of a TARDIS to buying about $100 worth of stuff to paint it, make it light up, play audio, and pulse its lights to the sound?

But before we answer that, let's start off with the final result to whet your appetite!

It was not incredibly difficult to make, but it was the result of a few weeks of effort and quite a lot of (im)patience.

This whole write-up is more of a story than it is a how-to for this project, but it'll still cover:

So how did this start?

I was walking around Fiesta Hermosa during Memorial Day weekend in 2017 when I ran into the LAZERMODELS stand. They had a lot of really cool models, but the one that caught my eye was a beautifully painted TARDIS.

I only started watching Doctor Who (2005+) about 2 years ago, but I fell in love with it something awful. Now I'm not typically someone that buys trinkets for things I like, but I was looking for a fun little side project to work on and this seemed like something I would enjoy looking at every so often.

And, as all projects go, it kind of spiraled out of control:

I'll just assemble it and it'll be fun!

Hm... I really liked how it looked painted. Maybe I'll paint it...

The guy at the stand had mentioned that someone put a light in the top part. That could be neat!

Well, I really don't want to put a hole in any of the walls, so I guess I'll have to make it battery powered.

I wonder if I can have it make the TARDIS sound and pulse the light in time with the sound.

I really don't want to have the sound playing all the time, so I'll need to be able to trigger it (again, without putting holes in the thing). Oh! I could have it be snap-activated, just like the TARDIS was in the episode where the Doctor first meets River Song! (Forest of the Dead - S04E09)

Note: Here are the finger snapping references in Doctor Who:

The TARDIS model is made of laser-cut wood, comes with directions, and is actually pretty straight forward and quite fun to assemble. There's a moment or two where the directions might be a bit unclear, but (if you're like me) it's kind of a fun puzzle to solve. The folks over at LAZERMODELS also have an assembly video guide in case you need it. 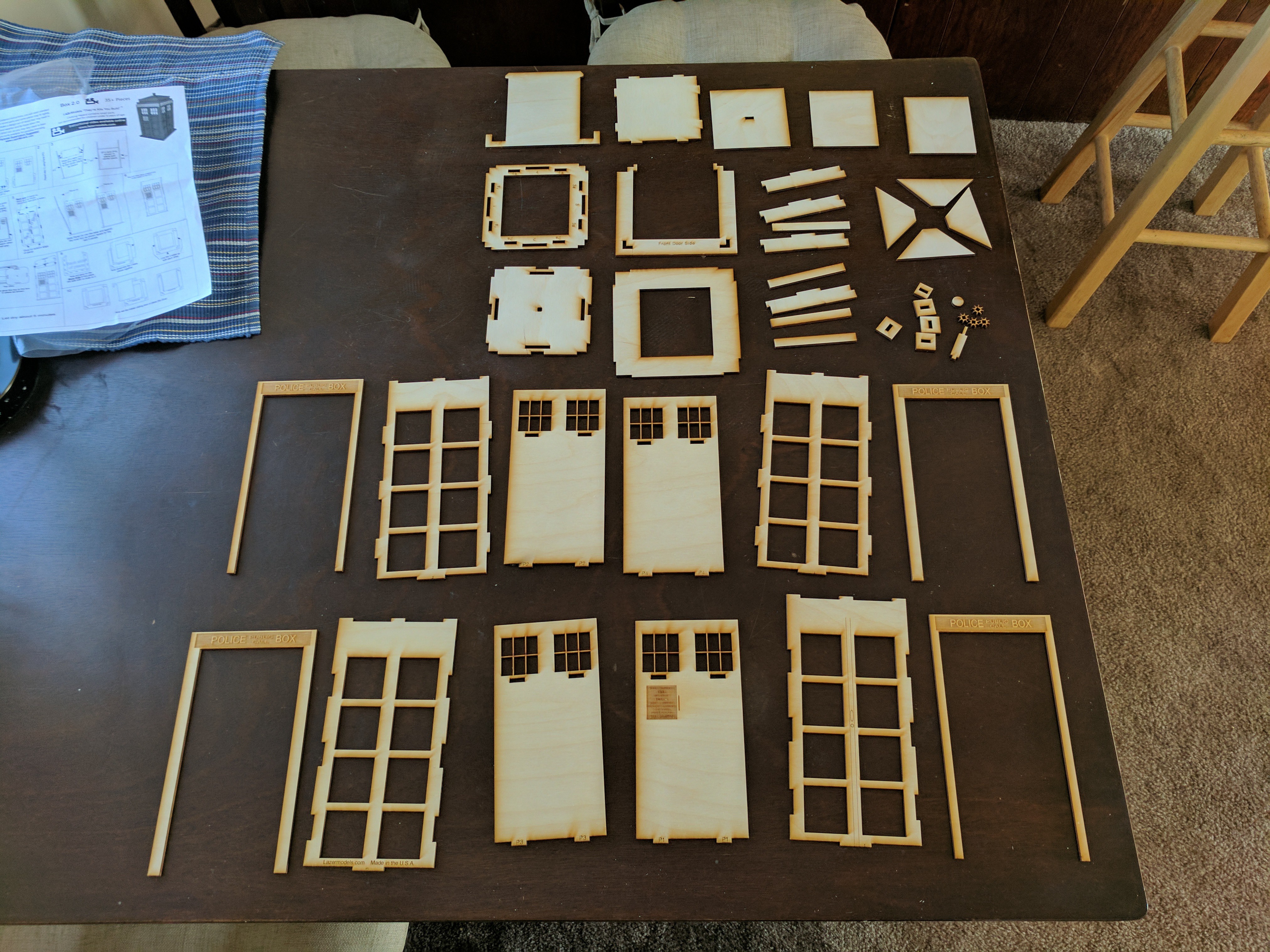 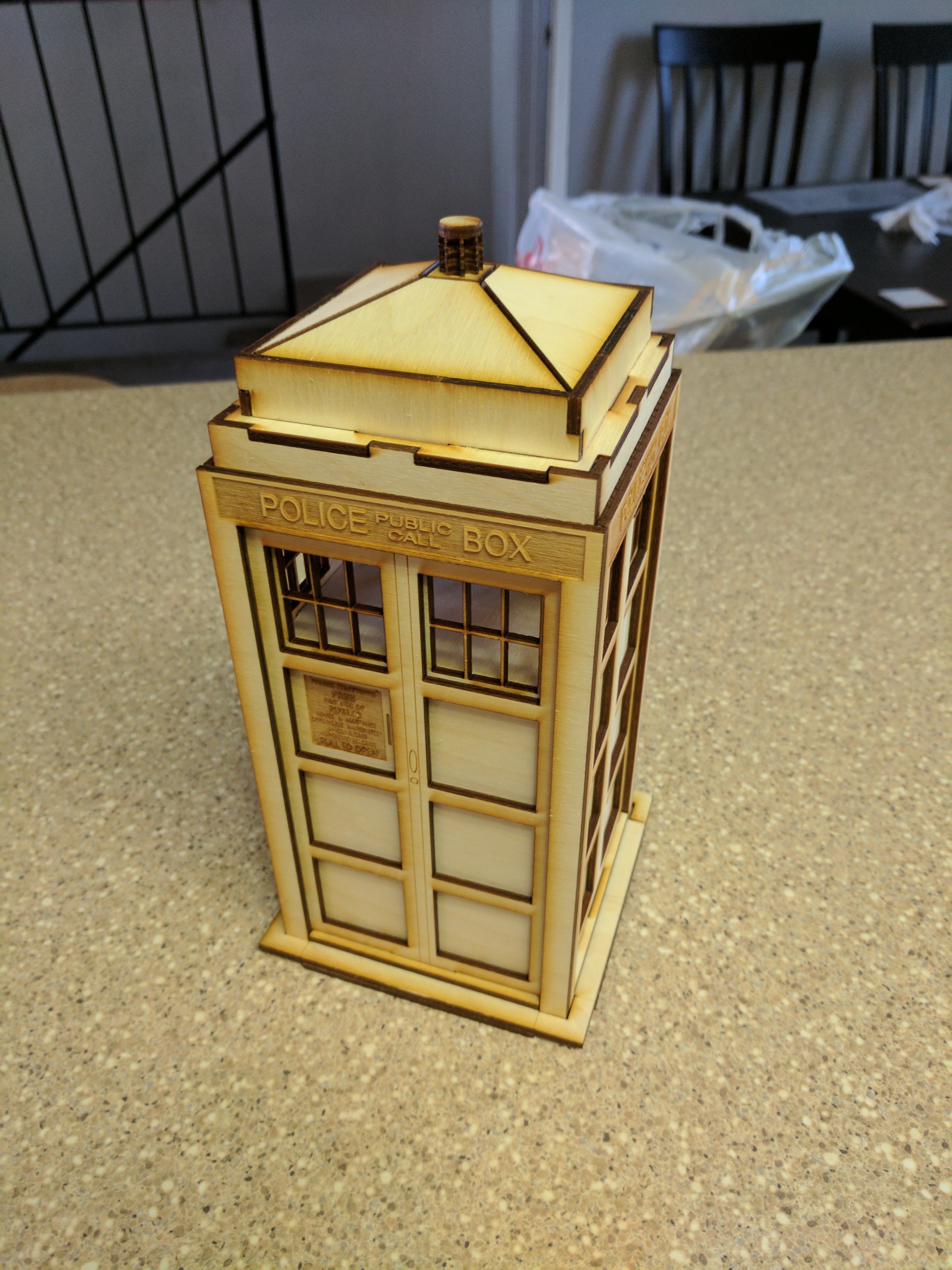 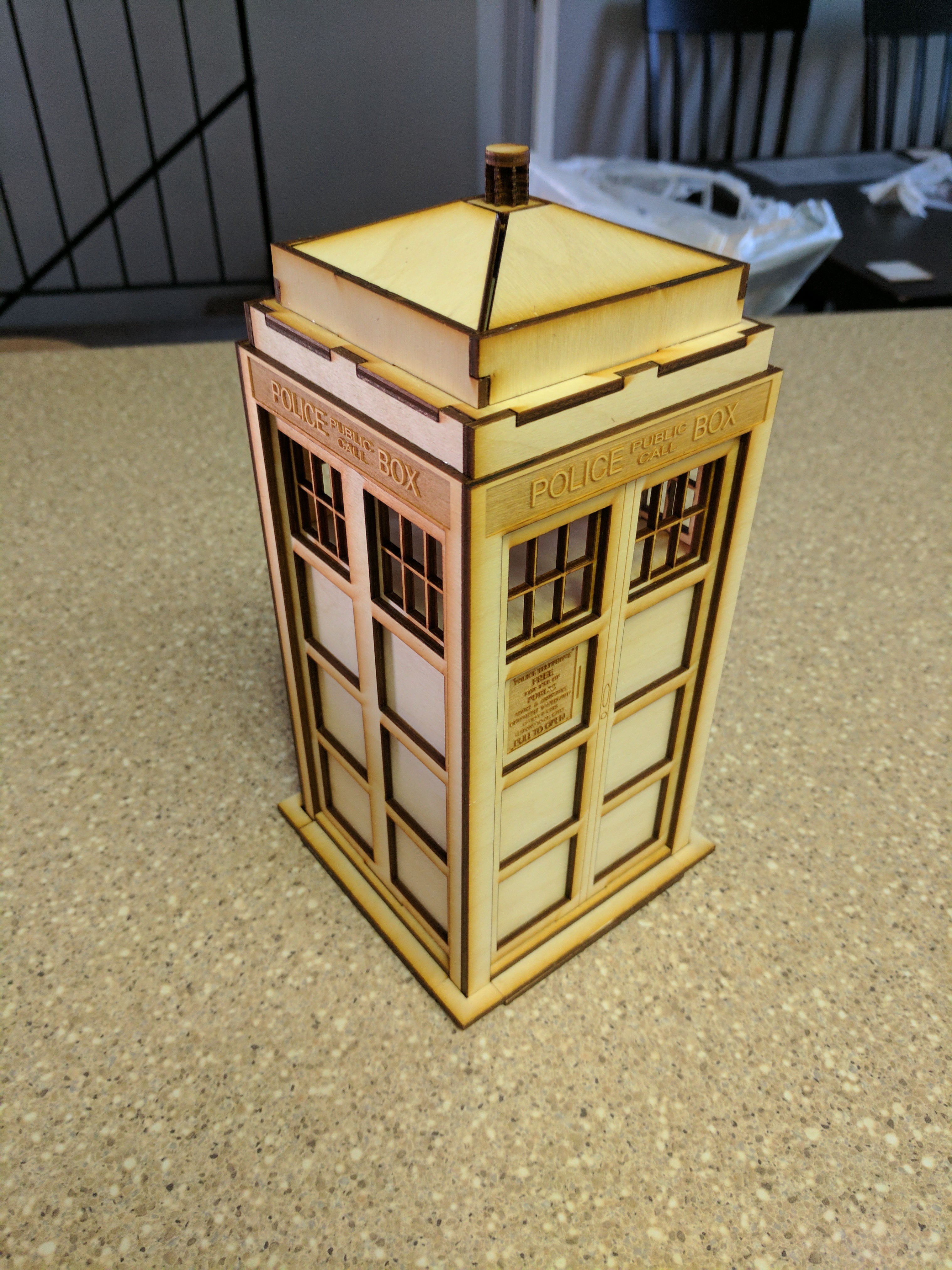 Note: Remember not to glue the roof of the TARDIS on because you'll need to be able to open the top to insert/remove the lights and electronics.

While I thought the assembled TARDIS looked pretty great, the fact that I had seen such a nicely painted model at Fiesta Hermosa left me wanting more out of this TARDIS.

Now, I'm definitely not an artist (I consider myself artistically challenged), but painting the TARDIS seemed like it should be pretty straightforward.

"It's almost completely blue with a little bit of black and white thrown in for the lettering. How hard could this be, right?"

Despite that confidence, I tried to lower my own expectations since I knew that:

"Worst case scenario, I can just buy another model and assemble it again. No big deal..."

The other aspect that drove me to paint the model was...

A circuit sculpture with lights, radar, muxing, music, and me. Made completely from scrap materials and unused parts.
Project Owner Contributor