Most animals accomplish localization of sounds using Interaural Time Differencing (ITD) and Interaural Level Differencing (ILD). Imagine the sound source in the image below is a balloon popping somewhere out in front of you. The sound from that pop does not travel instantly, so it takes some time for it to wrap around your head. This means that, unless a sound is directly in front of you, the sound will enter one ear before the other. 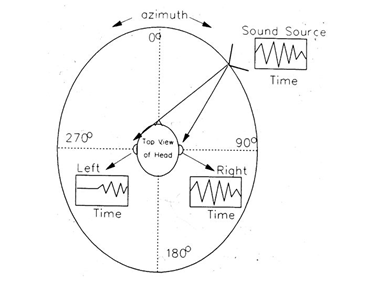 The sagittal plane (the vertical axis in the image above) is a little less straight forward, because there is no change in ITD or ILD as a sound source moves up or down. To determine the location of a sound above or below us, we use slight variations in hearing caused by the varying density of our head when viewed from different angles. Acoustic vibrations are conducted differently through our jaw than they are thorough our head from above, resulting in certain frequencies being accentuated or dampened. Using these so called "monaural cues" we are able to approximate the sagittal origin of a sound to within about 20°.

The image below gives a visual summary of these three localization mechanisms.