For reading and sending data will require two components: an Arduino board with a microcontroller that performs the first and a Bluetooth module that allows sending the measurements made, wirelessly, to the cell phone. In turn, you need to be able to connect the template with this electronics. Here it presents a difficulty since you can not sol-give the silver tracks. To solve this issue, contacts were made which are to be fixed by pressure between the two surfaces.

As mentioned above, 7 digital outputs and 3 analog inputs are used for data readings. Once the data of each sensor are obtained, they are stored on the Arduino board and then sent to a cell phone, which has an application that will be responsible at the end of the day to transfer the readings obtained in a full day to a platform of storage so that the health professional can access the state of the patient's foot. However, in situations of foot pressure, the application offers an alert system that instantly notifies the patient to corroborate the position in which he is or to make a control inside his footwear to confirm that there is not any object that can lead to an injury.
Arduino is an "Open Source" electronic platform based on an easy-to-use hardware and software method so that anyone can do interactive projects. This platform consists of a board that contains a microcontroller with input and output pins that can control motors, actuators, lights and obtain sensor readings. In order to send you orders and perform various actions, you can use a programming environment of the brand known as "Arduino IDE".
There are several models of these plates, depending on the need and utility can be taken into account various factors such as size, quantity of inputs / outputs, microcontroller used, memory required, consumption, among other aspects that can be taken into account at the time to choose one. In this project due to consumption issues, number of inputs / outputs and mainly size was chosen by the name model Pro Mini. 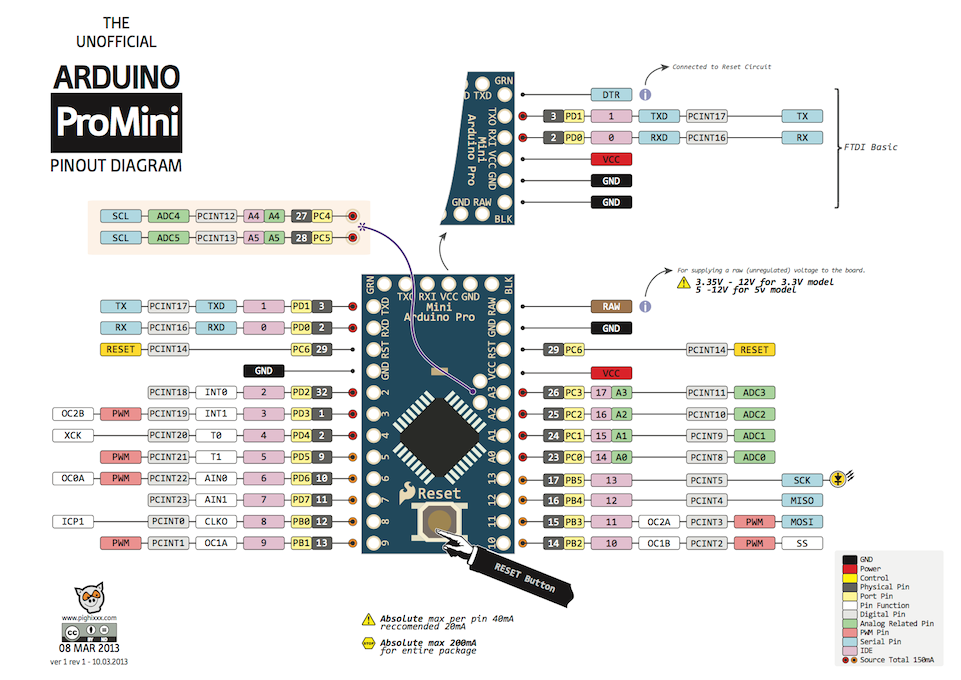 Arduino ProMini
Arduino Pro Mini is a board with the ATME-GA328 microcontroller. It has 14 digital pins that can function as inputs and outputs (6 of which can be used as PWM outputs), 6 analog inputs, a reset button and pin mounting holes. Six pins can be connected to an FTDI-type cable or to a Sparkfun board to provide power and USB communication to the Arduino. It has a circuit that operates with 3.3 V and 8 MHz and at 5 V with 16 MHz (Arduino, 2016).

The reasons for selecting the Arduino platform for the project were:
• Easy to program: in an Arduino-based development environment (IDE), it has pre-set functions that reduce the logic and reading of inputs, control of times and outputs in a semantic and intuitive way. It has the advantage of not needing a type of programming card like other microcontrollers, but the board can be connected to the computer via USB and can load the programs without risk of damaging the card due to its additional protection. The code is extremely friendly and has its own high level language called Processing, although this does not limit Arduino to be programmed in any language.
• Wide variety of documentation and tutorials, from the same page of the company, the IDE comes with many examples, as well as countless YouTube tutorials.
• Libraries for practically any ex-suit component that you want to dock, making it unnecessary to have to use the component datasheet permanently. Among the libraries we can find are Wi-Fi, Bluetooth, Ethernet, Servo, among others.
• Variety of plates, as mentioned earlier in this section, there are plenty of plates every need of the developer. Among them we find the MEGA, ONE, NANO, LEONARDO, PRO MINI, etc.
• Extensive ranges of shields or extra plates that fulfill specific functionalities like Ethernet. Wi-Fi, Blue-tooth, Relay control, among others. They can be coupled to the plate in a simple way and thus generate an increase in the available applications. In addition, Ar-duino is compatible with other brands such as Xbee, Key-two, LCD, SparkFun devices, SD-Card to name a few.
• A point that is of great attraction, is the price. It is much smaller than that of Rapsberry Pi and Microchip Microcontrollers.
• A large number of applications for practically everything to be developed, such as in-flight and data reception via Bluetooth, robotics, sensor reading, biomedicine and telemedicine

As mentioned above, sending the measurements obtained is via the Bluetooth module.
Created in 1994, Bluetooth technology was conceived as a wireless alternative to data cables by transferring information using radio transmissions. The name comes from the twentieth-century fighter who helped unite the fractions of what is now Sweden, Norway and Denmark: Harald Blåtand in English is Harold Bluetooth. Similarly to what this warrior did, Bluetooth seeks connectivity and collaboration between disparate products and industries (Bluetooth, 2016).
Among the most popular applications of this technology we find the ability to connect devices efficiently and quickly, in the same way you can connect these devices to a computer, Tablet, Smartphone, sneakers, watches and in any case that are limited only to the user's imagination and its way of doing so requires little functional energy.
This technology was chosen for the sending of data, since, at present, most people have access to a Smartphone and they are always included in Bluetooth, so that they achieve great accessibility.
Among the advantages we can mention
• It is wireless
• When traveling with our notebook or other wireless device we do not have to worry about the connection cables anymore.
• Bluetooth is an inexpensive technology
• It is automated and does not require connection configuration or having to press any button.
• As for the protocols Bluetooth devices are standardized, ie they work well even if they are different models. The compatibility between different models is safe and can be communicated without problems.
• Low interference is another advantage of Bluetooth as these are mostly avoided by using low-power wireless signals and frequency hopping technology.
To start talking about Bluetooth devices, it should be clarified that they can act as Masters or Slaves. The difference between one and the other is that the latter can only connect to a Master, on the other hand if they act as Master means that they can connect to several Slaves or allow them to connect and receive information from all of them, handling information transfers (up to a maximum of 7 slaves). 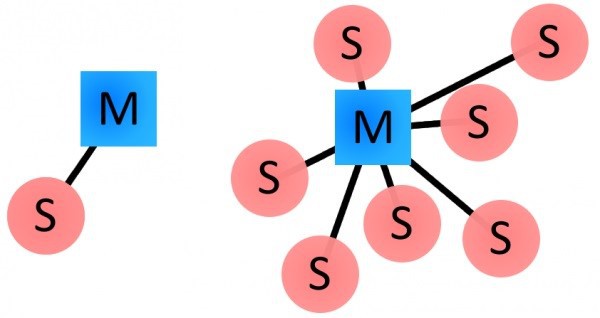 Difference between Bluetooth devices Teachers and Slaves
Each Bluetooth device has a unique address of 48 bits and a name that serves to identify it more easily to people.
Summarizing the above, a Bluetooth device can be Master or Slave and has a unique address and a name to identify. Sometimes it includes a login PIN or identification number that must be typed in order to gain access to it.
When two Bluetooth devices are linked, a process is started in which they are identified by name, address and, if necessary, the PIN is requested to authorize the connection.
Once this pairing is successfully accomplished, both Bluetooth nodes typically store the other's ID and when they are close, they are again linked without the need for manual intervention.
For this type of connections, Bluetooth modules used with the Arduino board have been available for some time. These modules have an adaptation to facilitate their use but with the consequent increase in plate size and energy consumption as it brings integrated circuits to facilitate their connection