For SonoSight: The AR glass for hearing impaired

SonoSight uses the perceptual phenomenon of Synesthesia to map 3D sound as visual elements through AR.

• There are over 43 million worldwide with a total hearing loss.

• Sound location awareness is not provided by existing devices and requires a special hearing dog to aid the user identify important sounds around them. Hearing dogs are expensive and the training between user and hearing dog extensive.

• Most products in this domain seem to target the speaking and communication aspect of sounds and not the general day to day context provided by the ear.

I, Manoj Kumar along with my partner Vignesh have always found assistive technology devices to be interesting due to the real impact the devices have on the people using them. I admire the artistic potential of modern technology coupled with elegant design. Sensing in particular draws my attention due to feeling of augmentation of my existing perception. The visually impaired live a normal life by embracing the additional information provided by their remaining senses. After seeing a talk from David Eagleman on his hearing assistance vest, I wanted to work on adapting positional sound to an Augmented Reality headset.

Our solution is an affordable Augmented Reality headset with multi-microphone setup to assist the hearing impaired user identify various sources of sounds around them in an unobtrusive and intuitive manner. SonoSight uses a low cost holographic projection setup based on the DLP2000 projection engine. The various sound sources would be identified using acoustic triangulation and mapped accordingly while taking the user's position and orientation into account. We propose the use of FFT to determine the various frequency bands to identify the source of sound and to isolate speech. Other than the sound source awareness conveyed to the user, We propose near real time speech to text translation by sending an audio signal to the google speech API which can help the user assimilate information from people who cannot use sign language. We aim to go beyond simple voice to text translation while we use voice for communication in daily life, Hearing goes beyond that to things we take for granted. It gives us spatial awarness and often alerts us to things in the environment (Eg: Doorbell, walking along a road or being called by someone from behind) 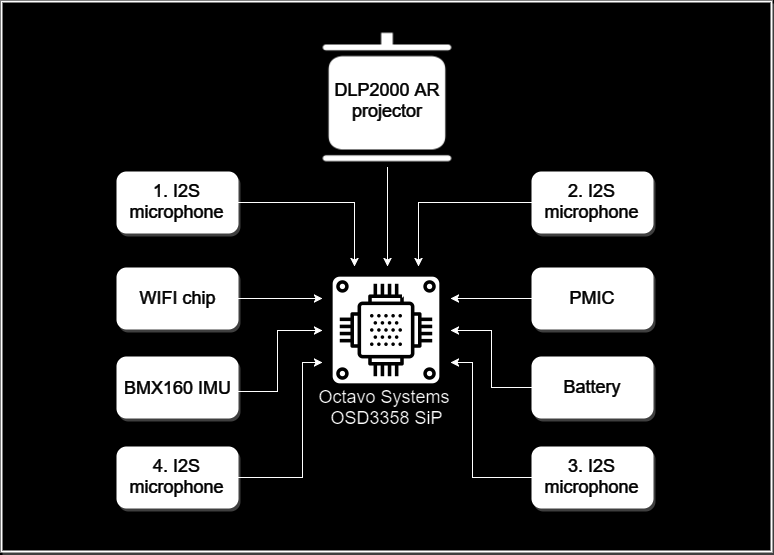 (Block Diagram of the final system)

For our holographic projection system we went with a beam splitter assembly, With the DLP microprojector behind us. The prototype had to be confined to this tight space due the space constraints of the beaglebone cape. We have been in talks with supplier who can hook us up with a compact SPI protocol DLP2000 module including the optical assembly.  But without further ado here is our custom projection system for the HMD.

(Figure: Simple yet effective AR projection system for the HMD)

For the sound awareness display we have come up with a simple UI based on different color gradient markers which are used to indicate the direction and intensity of the sounds around the user and even allow real time frequency analysis of the sounds to distingush a horn from an engine. The display UI was done on OpenCV2 for python.

Speech recognition is the process of converting an acoustic signal, captured by a microphone to a set of words. Some speech recognition systems use "training" where an individual speaker or user reads text or isolated vocabulary into the system.

Voice User Interface are included in Speech Recognition off late in all smartphones with applications like voice dialing (e.g. "Call home"), domestic appliance control, call routing (e.g. "I would like to make a collect call") , search, simple data entry. With recent efforts in multi layer deep learning the accuracy has gone way up and is now offered as a service.

This application is based on using the Google voice and speech API’s which google provides for free. The voice is recorded using the Microphone. Then using Google speech API’s it is converted to text. The text is compared with previously configured commands in configuration command file. We also set several control command keywords which would control the interface. If the text matches with any of the commands, thus it performs the specific task. After finding the required commands the bash command for particular task is executed.

(Figure: Our implementation for the voice to text)

Once installation is done, recognition can be obtained by simple api calls to the cloud.  --For examples please have a look at this. ---- Since the recognition we need is a real time which is like listening to a audio and simultaneously it should be able to update. There should be some way of getting the inputs from the mic and storing it and sending it to the cloud in a proper way. To do this Pyaudio module is used.

While there are concerns already about the ethics of cochlear implants in the hearing impairment community, We want to make it clear that we see our device as an addition to amazing deaf community and their intricate sign language. Assistive technologies often walk on a tight rope so as to not take away from the amazing culture the communites have built and we would be willing to hear feedback to this end on how we can adapt without taking away from the deaf community.