Their are a couple of configurations to combine the power supply and data on the same bus. It all depends oon seperating the power supply from the data.  The data is transmitted over a differential voltage across the two terminals of the RS485 driver (A - B) 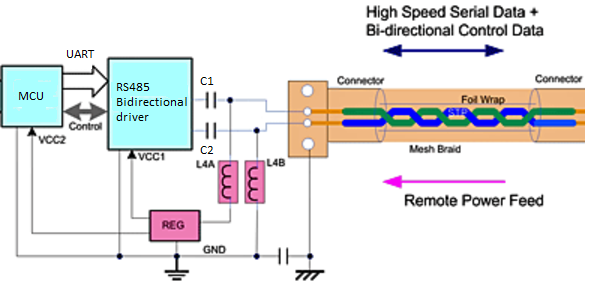 The picture above shows a possible configuration. A shielded cable is used to reduce noise when data is send over the cable. The seperation of the power supply and data is done by the capacitors C1,C2 and the inductors L4A, L4B.

The two capacitors will block the DC - voltage from the power supply while the inductors will act as a very high impedance towards high frequency signals ( RS485 data). It's important to choose the inductor value with the according baudrate or transmission speed of the data.

The inductive reactance (XL = 2 * Pi * f * L) will increase with a higher inductance value, or higher frequency. It's important to lower the noise on the DC-power bus of the slave device as much as possible by using:

The transmission speed depends also on the lenght of the cable, while the inductance value depends on the type of inductor (core, without core) , and the number of windings. One problem is the physical size of the inductor. In my application of the concept everything has to fit inside a small place

A downside of this configuration is signal noise of the power supply. All power supplies introduce some noise to the connected circuits. It's important that the power supply has some noise reduction circuits to minimalise the noise. This is important because the DC-voltage is supplied on both wires of the cable, and the capacitors to the RS485 driver only block DC-voltages noth noise (which are AC-components).

Other signal noise may come from the motor used in these trains. It will be necessary to do some tests and choose good components:

* Determine the maximal length of the cable with the highest transmission speed and low data errors.

The design of the PCB only includes the capacitors that will block the DC-components on the cable. Because of the size of the inductors ( I'll be using axial inductors) they will not be placed on the PCB.

This link explains different kinds of configurations that can be used to power devices over a RS485 bus:

waiting for components, and software progress

where does the 120 ohm termination resistor go?