This is DME CPU's ISA

This is DME's ISA: 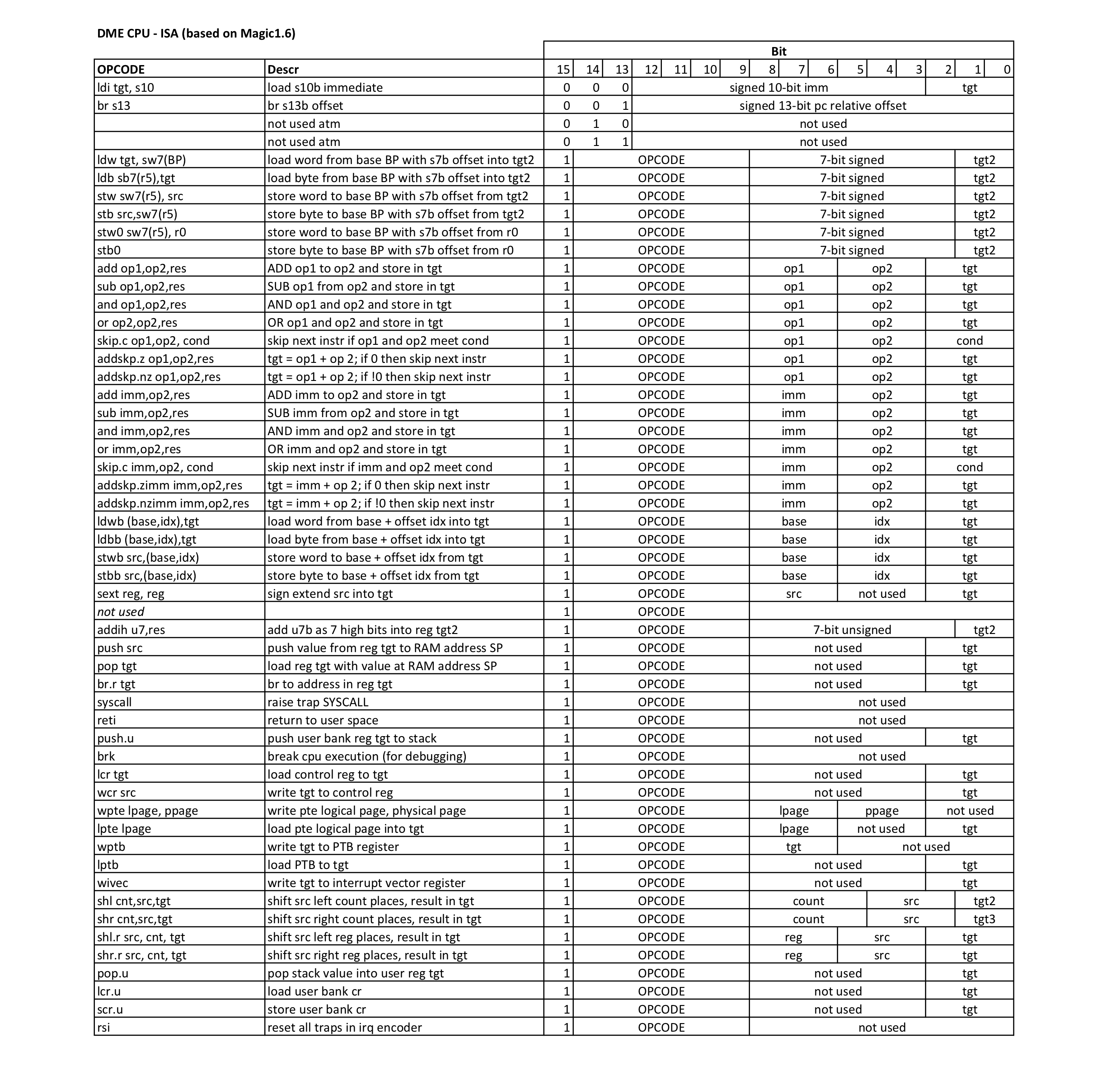 It's heavily inspired (copied?) from Bill Buzbee who designed an ISA for his planned Magic1.6 project. When I started my project I had no idea what to look for in an ISA, so I took his concept as a starting point. I took the load/store and the arithmetic instructions pretty much as I understood them. The 'architecture specific'-instructions (dealing with page tables and interrupts) I added myself. I also deviated from the pure RISC pattern by adding PUSH and POP instructions. As I was doing a design with a stack, these were just too good not to have and not too hard to implement.

When I started my decoder in Verilog the plan was to not use microcode. At the time, I only had about half the instructions finalized and was implementing them in the decoder with 'case' and 'if-then' clauses in Verilog. Two reasons made me switch to using a microcode approach:

1. It was too 'programmy' for my liking

I started this project because I was intrigued by how simple logic blocks turn into a full blown CPU. For this reason I have tried to keep my Verilog as simple as possible. Going for a "I should be able to implement it in hardware"-feeling. The complex decoding logic I was typing into Verilog felt too much like programming and not like I was designing anything to do with hardware. If I'd have to do this in hardware I would have to move to a microcode approach.

2. Microcode is a lot easier to change

In the early days of my CPU my ISA changed a lot. As I wrote the assembler and later the compiler I constantly ran into instructions that couldn't target a certain register or instructions I thought would be handy, but which the compiler in practice would never use. Being able to change the microcode just be editing a text file has been such a good solution to deal with all these changes.

So I ended up with a microcoded decoder. The decoder uses the OPCODE number as an index into a table of 48bit microcode. The bits in the microcode drive the control lines in the CPU. The microword looks like this:

It uses 46 out of 48 bits. I could get that down by quite some bits if required as a lot of duplication has crept in over the time. But there is no real need to do so: the FPGA has plenty of room and it's not really interesting to me at this time.

Looking at the ISA today I could see how, with some sorting and clever grouping it could probably be realised in a less complex set of Verilog statements without needing any microcode. Still, I think the microcode-approach has worked out well. It was something I could definitely see myself implementing in hardware, it is a breeze to change and, this being an FPGA, I have a suspicion that at the LUT level both approaches come down to pretty much the same thing.