A device to quickly crack PIN codes on Ford automobiles with a PIN entry keypad, and to demonstrate the shortcomings of this system.

So I figured that before I got much further into this project I should check if the solenoids I bought have enough force to push the buttons on my keypad.  The solenoids I purchased were from All Electronics, part number SOL-102.  They are a bit odd in that they are push type solenoids, but that is what I need to push buttons without having to build some sort of rocker mechanism. 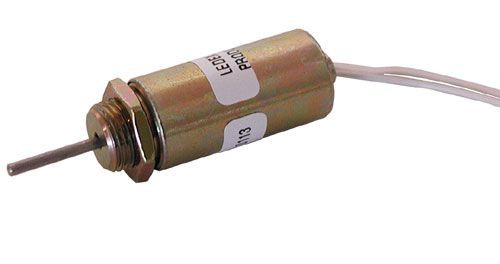 I was going to start to build a plate with the five solenoids mounted so I could place it over the keypad, but then I decided to just hold the solenoid over the button and energize it with the specified 12 volts.   Turns out they don't have the force to reliably push the button.

So now I have to figure out how to fix this problem.  I could look for bigger, stronger solenoids, but I would have to find ones that fit in the spacing of the keypad, and are push type.  I would rather not have to do more searching, order more parts, etc.

I could hit the solenoids with a voltage much higher than their 12 volt rating.  This would probably not cause a failure of the solenoids, since we are pushing five different buttons and each one would be energized less than one fifth of the time on the average.  And it would take a significantly higher voltage to break down the insulation internally in the coil.

Another option would be to use a different method entirely.  Servos would have much more force.  Problem is that they would also be much slower, and one goal of this project is to complete entering the number sequence as fast as the car can recognize the button presses.

So I will try the second option.  Hitting the solenoids with a higher voltage is quick and easy and will likely work fine.

What I've Accomplished So Far