An alternative way of looking at energy distribution inspired by the work of the great Nikola Tesla.

Created in 2005, this is my take on how Tesla intended to use his famous coil. He was never a showman, so why would he create a lightshow if it werent for a reason. To repeat it, you wont need a Tesla Coil though - any high voltage DC pulsed power supply will do. It has to be DC - ie forward-travelling voltage as one end is grounded. This is important, because no electrical energy is flowing into that bulb from the power supply. There is no circuitry in it, and it's grounded, and all the energy to light it comes from my hand.

Mr Tesla up to his tricks... 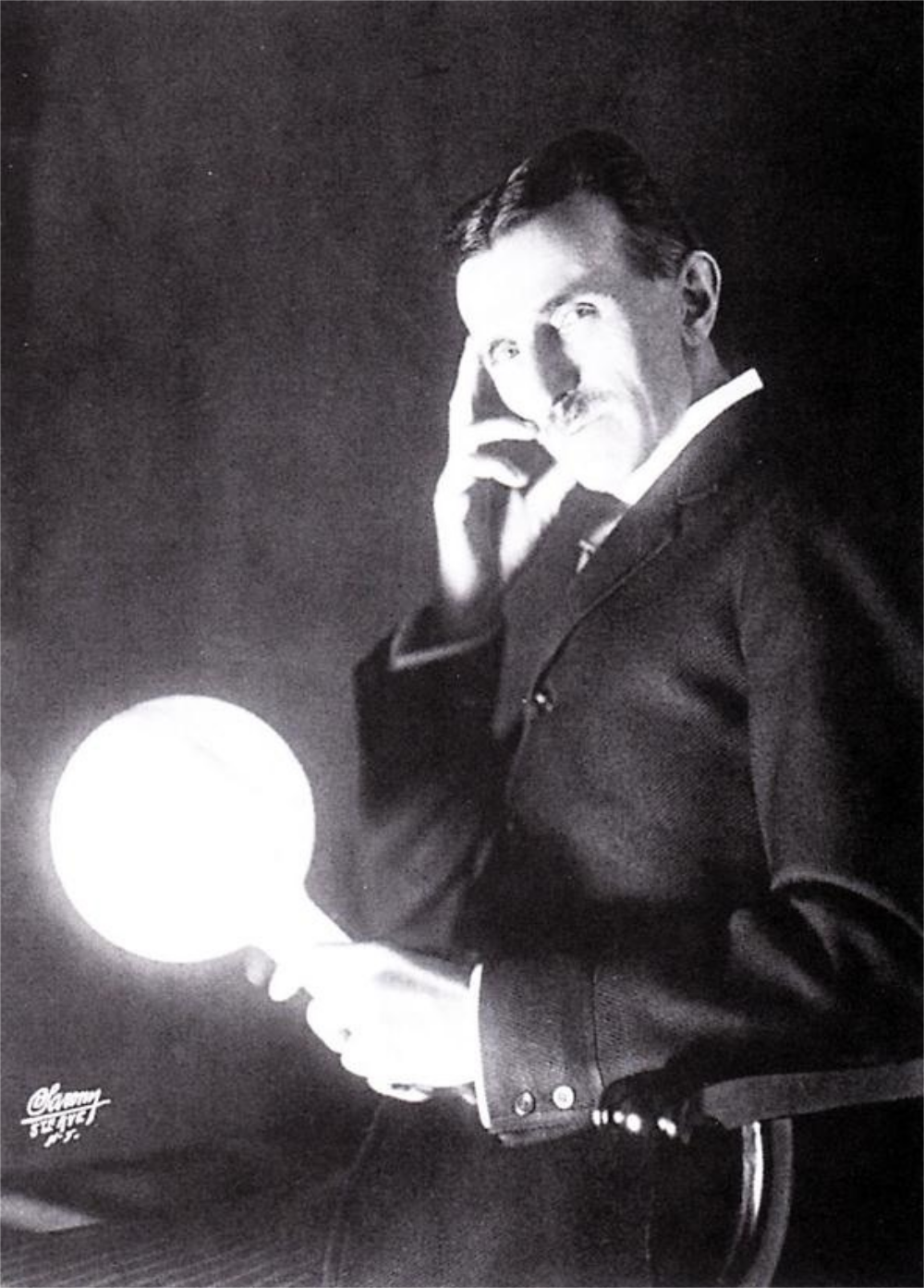 It isnt any great secret how Tesla did this - it has become fairly common knowledge that a Fluorescent Tube will illuminate when in the presence of a massive electrical field without requiring any electrical connection. The bulb he's holding doesnt need one and doesnt even have one, when energised by an antenna connected to a high-voltage coil off-camera.

To generate this field allegedly requires a lot of energy. Tesla managed to do it with comparatively little by using recycling, though in an era that thought the world's resources were infinite and placed on Earth solely for our benefit it was an odd thing to do. I suppose, he knew different, another thing that put him centuries ahead of his time. 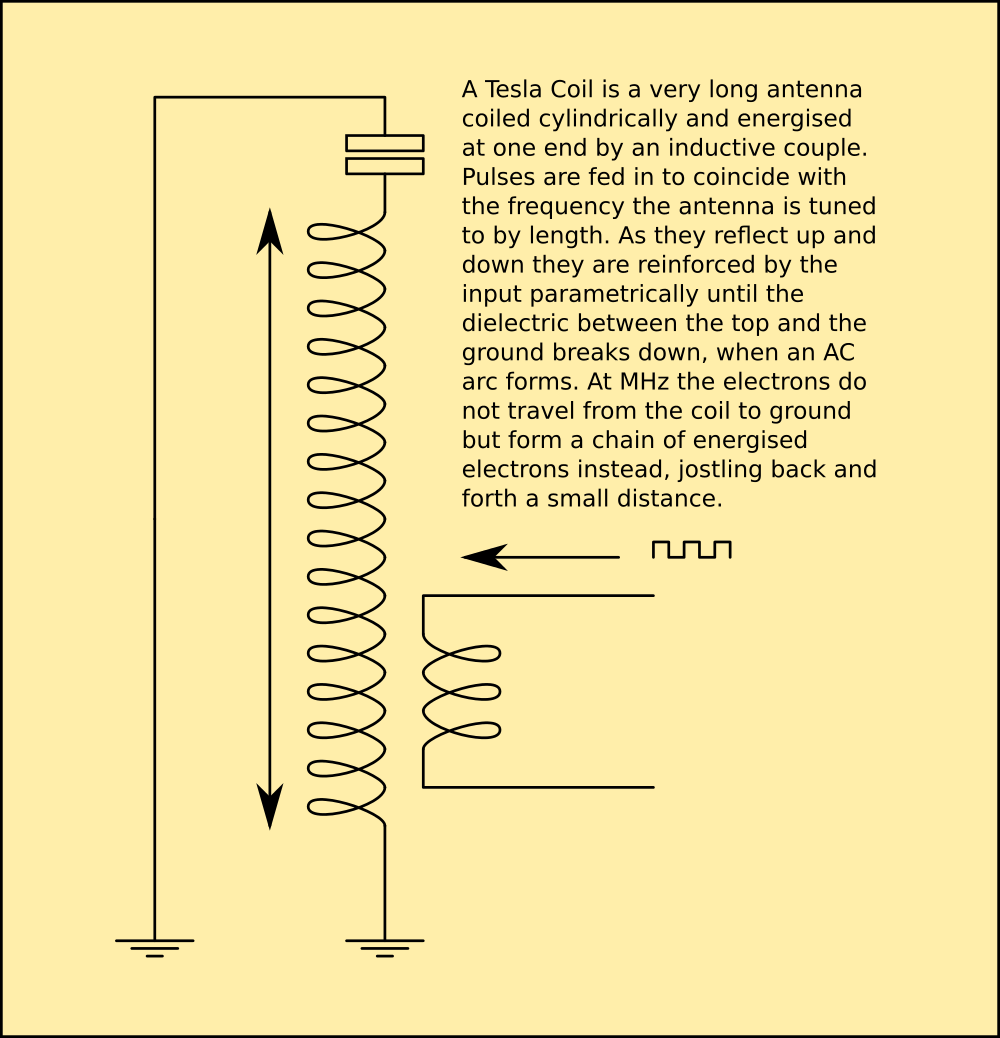 That isnt a transformer, even though effectively it does the same job using the same technology. It's a charge-pump and bears more relation to a radio transmitter than a transformer. Note that I have used a capacitor symbol connected to ground to represent the top of the circuit. This is normally a large metal ball separated from the ground plane by a few feet of air. Because it takes around 25KV an inch to create a normal arc, it requires millions of volts to puncture several feet of air as a dielectric, and a normal transformer could never achieve it without arcing out inside. The limit for these things is geometric and related to thickness of insulation and number of turns.

Because a coil carries a differential between the first and last turns, spread out over the turns, when energised neighbouring turns carry a fraction of the differential and when it gets too big it defeats the insulation between them and burns out the windings.

A Tesla Coil doesnt carry a million volt differential between the ends at any time, so it doesnt burn out. Instead of an AC source inductively powering the secondary, Tesla feeds the coil with short timed pulses that coincide with a wave of voltage that runs up and down the wire in the coil. It does this because the ground plane is capacitive, and when you hit it with a fast pulse it reflects some of it back because it cant absorb it. Voltage travels at a fixed speed in a material, and the material is very long and thin so it takes time for the pulse to reach the top and reflect back. This is how an LC or Tank circuit works; pairing a capacitor with a coil and bouncing the energy back-and-forth between them.
Obviously with a little extra energy added to a million-volt wavefront each time it passes, before long it will defeat the air dielectric and arc out. However, because it is high frequency the electrons passed into the air dont travel very far before the arc begins to decay, so effectively they arent really moving but jittering in place at high frequency. This drastically shortens the path the electrons have to take, so a much lower average voltage is needed to cross several feet compared to a DC arc, in which the electrons have to jump the entire distance.

It distributes the energy in the arc over the length of the arc the same as in the turns in the coil, a much longer distance to travel, and creates it from a very small amount of actual input.

Thats half the story, now we know that it takes voltage, and not amperage to light a fluorescent; a tube of glass coated with phosphor that reacts to electrical energy by emitting photons. It contains a vacuum to make it easy for electrons to move, and a large electrical potential is set up between two ends to move them.

Unfortunately, this is where Tesla left off. We all know the story of how Westinghouse contracted him to improve his generators on a promise he never made good on, famously ripping him off with a racist remark into the bargain. Pity the greedy fool, because Tesla only gave him half the work required to make Westinghouse an infinitely rich man. The other half was his famous coil.
Back then, power companies were more concerned with lighting homes and streets than providing current, and Tesla's bulb was a huge threat to the...

Look up a thing called a Violet Wand, its essentially a hand held tesla coil. I often do shows with one and have a contact pad in my boot, the Violet Wand attached to the contact pad turned on and laying on the floor then stun onlookers when I touch gas filled glass tubes and make them glow. :)

As you have one, can you try wrapping a well-insulated lead from it's output around a bodypart and let me know if it has the same effect without the pain? Direct contact with it certainly will modulate your bodyfield enough to light Fl tubes...

Regards to Mr Stabby and his programmed reciprocation. You sir, have some interesting friends XD

linear actuations for everyone!