A project log for Food dehydrator - simple and cheap

Food dehydrators are conceptually very simple. Let's see if they are that easy in practice.

Data has arrived! The persimmons are ripening and the experiments are taking place. The first series of tests were using different heater power levels, 150W, 300W and 600W. Note that most commercial dehydrators of this size use around 1kw, but they also heat the food more than I would like, which kind of cooks it and changes the nature of it.

I will first apologize for my lack of scientific rigor. The amount of fruit was not kept consistent between tests because my supplies vary and it just takes so much time to do a batch. There were long periods of no measurements due to me being asleep. Also, I did not measure the temperature, which is an important parameter. Having said that, here is the result of the first three tests. 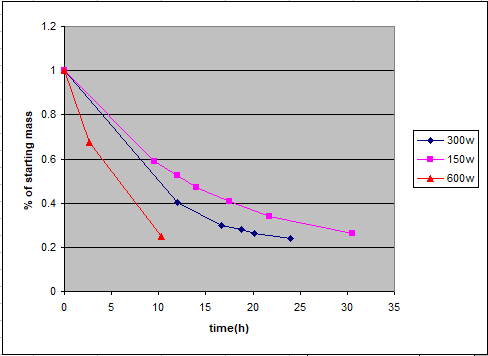 So how about energy use:

Considering time required, the clear winner is the 600W version.

Very interesting data! Thanks for showing your efforts!

Would be very helpful to know the inside air temperature so it does not get cooked.