This machine allows children to get into touch with the personal fabrication technology by enabling them to create their own name tags.

Devices like small sized desktop 3D printers and milling machines are already finding their way into our private households. These personal fabricators may be beneficial for many different applications like prototyping, spare part fabrication or individual product design. But, so far, many of these machines still show to be cumbersome to use. Novice users often have to face several challenges before they can operate such devices and achieve their desired results. These challenges may also form an entry barrier for people who are not familiar with such devices and prevent them from getting into touch with this technology.
My approach to solve this problem is the 'Badgemaker'. This stand-alone device should provide novice users, like children, the opportunity to gather early experiences with the fabrication technology by offering them an intuitive and easy-to-use milling machine. It enables them to create their own illuminated acrylic name tags in a safe and self-directed way. 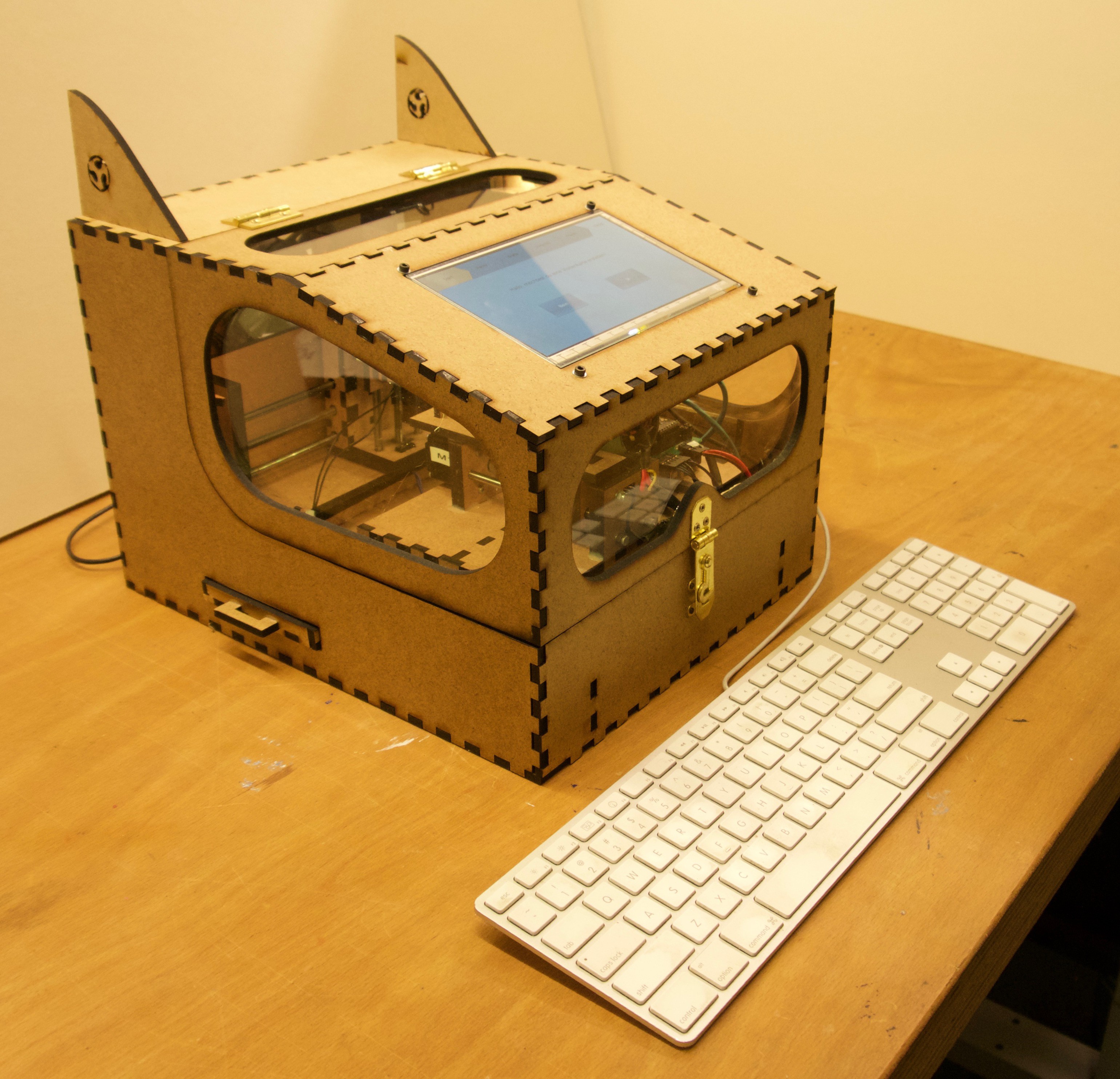 This project was part of my bachelor thesis and realized with the help of the tools and fabrication machines from the FabLab Aachen. The goal is to encourage people and especially children who are not familiar with personal fabrication yet, to get into touch with this great technology and learn the beneficial use of such devices.

To break down the complex design and building process, the fabrication is reduced to a simple application of creating name tags. The name tags are manufactured by engraving the users name and an individual graphic onto a blank sheet of acrylic glass. A battery connected to two LEDs make the name tags glow at the engraved areas and turn them into an eye-catching accessory.

The user is guided through these steps by displaying a simple structured graphical user interface on a touchscreen and offering extensive feedback. Inner lighting and a beeper for example provide additional visual and audible feedback which indicate whether the workpiece was inserted or removed correctly. Safety mechanisms prevent the user from injuries while the mill is engraving the workpiece.

The whole construction is built out of MDF- and PLEXIGLAS-sheets. The linear motion system with the mill are encapsulated in a case which offers a safety-door to access the interior part.

A Raspberry Pi 3 Model B is used for the front-end. It runs a java GUI-application which takes care about the user relevant input and output (interaction). For the touchscreen a Waveshare 7inch touchscreen is used. When a user confirms his input and starts the building process the raspberry pi merges the user's name and the selected graphic into one SVG image which is then converted to a dxf-file. After that, the dxf-file is converted to g-code using dxf2gcode (this is currently a workaround). The g-code job is then sent to an Arduino UNO R3 which serves as machine controller and forms the back-end.

The Arduino UNO runs the g-code interpreter grbl and controls the linear motion system, as well as the mill. Simple bearings, some nuts, leadscrews, aluminium rods, and three Nema 11 bipolar stepper motors build the core of the linear motion system. A cheap Proxxon MicroMot 50 is used to engrave the acrylic glass with the users name and his selected graphic. A custom made UNO shield is mounted on top of the Arduino which provides slots for three SilentStepStick drivers and a simple 3.3v <-> 5v level adjustment circuit for the serial communication between the Arduino UNO and the Raspberry Pi. We will learn to manage more than 100 devices in ubidots, user management, organization roles and final applications
Project Owner Contributor

2021 Hackaday Prize
We want to help people who are unable to communicate verbally and cannot use sign language by providing a wearable “eye-to-speech" solution.
Project Owner Contributor