"not north", a connected compass

This device is about a compass that is not pointing north, its pointing where you like it to.

The basic idea where based on two devices that pointing to each other - doesn't matter where and how far away from each other there are. So the owners are directly connected through this device and know where the other is to find. 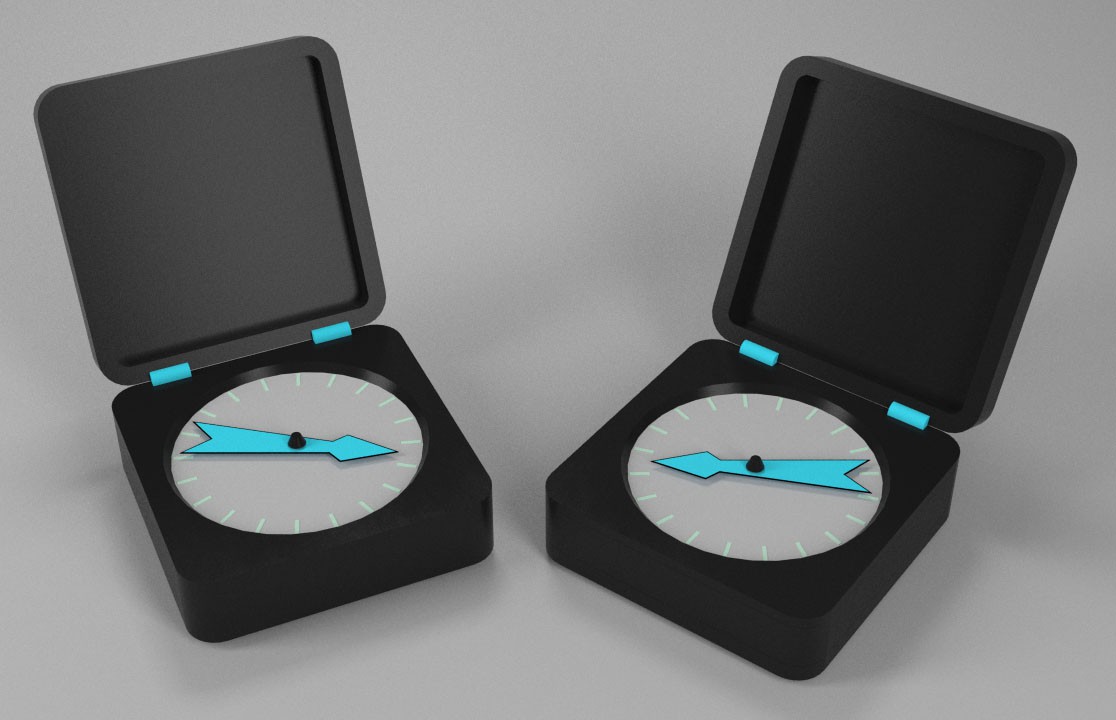 From the outside it looks like an ordinary compass in a box.

There are no lights or buttons, its just a rotating needle that gives you information back.

If you open the lid, the needle starts rotating and indicates its searching for the other device.
When its done, its pointing in the direction of its partner.

The inside , where the magic happens, is full of technology. 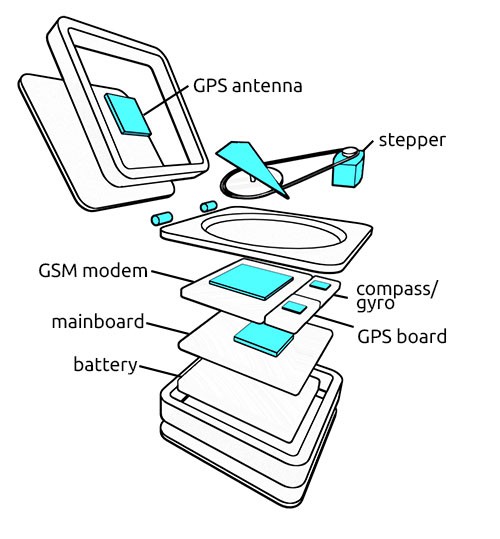 It consist on a GPS Module, GSM Modem, a real magnetic compass, a gyro and a motor that steers the needle.

The thing is basically a GPS tracker, so I decided to use the cheap TK102 tracker.
It makes everything a lot easier to Prototype and play around.
The tracker offers GPS, a GSM Modem, a Battery and a Charger over USB.
It has two serial Ports to read the current position and to send / receive data over mobile network.
An arduinolike IC is doing the logic and calculations between the components, so you have unlimited possibilities to modify it and use it for your idea.
The needle position get calculated between the two geographical positions, the direction from the real compass, and to keep it fluent - the forces from the gyro.

In addidion, it could be possible to extend the system with an RF transreciever, like xbee.
With multiple antennas on the outside of the case, the origin of the signal is can be measured by intensity of a signal on each antenna.
So the device is not more limited by the precision and availability of GPS and GSM. And it also can send data directly from device to device.

But step by step.

Alternatively you can use the device as standalone and extend the range of possibilities.
So, if you want to point on a geocoordinate, a connected object like a smartphone,
you can just send the information via APP, website or even SMS to the device.
You can nearly connect everything that knows its own location.

So it would be useable for classical geocaching treasurehunt, finding people in a large crowd, or just show direction of the Moon.

have a nice prize
and keep on hacking

James Barber wrote 08/21/2014 at 16:32 • point
I can think of quite a few applications where this could be nice. My first thought was that this would be good for camping/hiking, say you leave one of them at your campsite and then you will always have a direct path back to it. it also would make locating campers much easier, what with the compass literally being a gps beacon.

My other (less practical) thought idea is to use something like this for paintball/airsoft tournaments, they would basically be like the waypoint arrows that we are all so use to in video games lol.

Griff wrote 08/21/2014 at 14:17 • point
I really like this idea. My first thought before I even read as far as having two devices was using it as a different kind of satnav for your car. I always get irritated by the voice controls from my satnav and usually turn them off. Also, often when the sun is very bright, it can be difficult to see the display from the glare on the screen. I would put one of these in my car and connect it to an android app on my phone so I can type in a location and use the compass to get me there.
I know that it wouldn't be quite as convenient as turn by turn directions, but I think it would work well for most journeys and would be a different and fun way of doing things.

to get readings on laptop etc.
Project Owner Contributor

Analysis of a communication device for children.
Project Owner Contributor

Step into a stranger's body through wearable devices that sense, exchange and mimic biosignals data over a network
Project Owner Contributor