*Unofficial* statistics gathering for HaD Prize entries. If you come up with anything fun, leave a comment!

- incidentally: only one Youku user : )

Number of entries with at least 4 project logs: 480

Number of entries with at least 4 project logs AND a video link: 445

Odds of project landing in quarterfinals (top 50): one in 8.9

Number of valid entries that didn't change the default photo: 6

YouTube playlists of HaD entries.  Videos culled from entries with video link - some are not "contest entry" but just progress update, etc.  Split into four playlists because YouTube limits to 200 videos / playlist.

As noted by davedarko: "wow, so if every 445 put up a 2min video, this means 15hours of video material!"

"At the moment when the input data was sampled,
- there were 718 hackers with a total of 791 projects 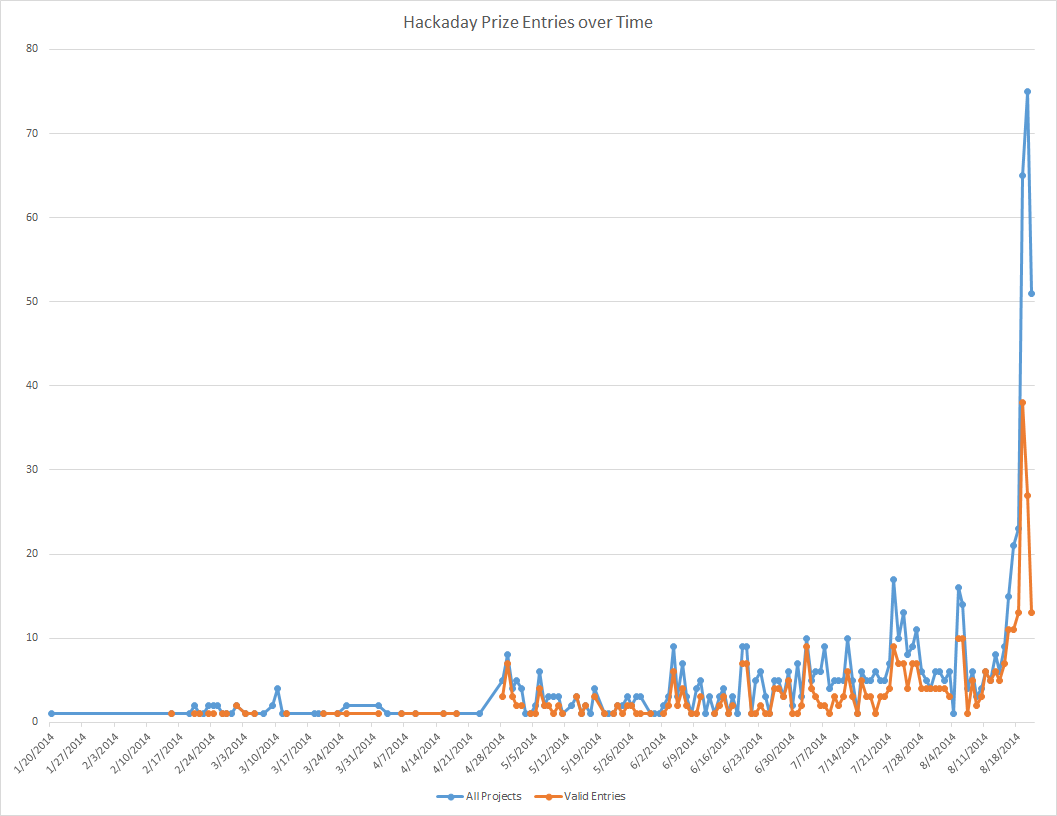 The final 7 days accounts for over a quarter of both submissions and valid entries: 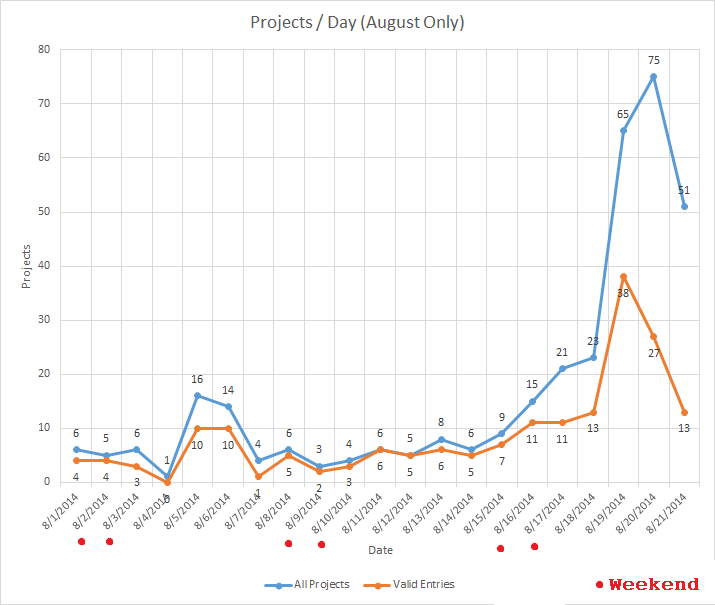 The busiest day was Aug. 20, with 75 submissions (27 valid), although the best day for validated entries was Aug. 19 at 38.  Incidentally this reveals a discrepancy between hackaday.io time and hackaday.com time: 51 further submissions (13 valid) arrived on Aug. 21, the day after the deadline : )

Project Log statistics - this chart shows the number of project logs per project.  Most people posted either 0 or 4. 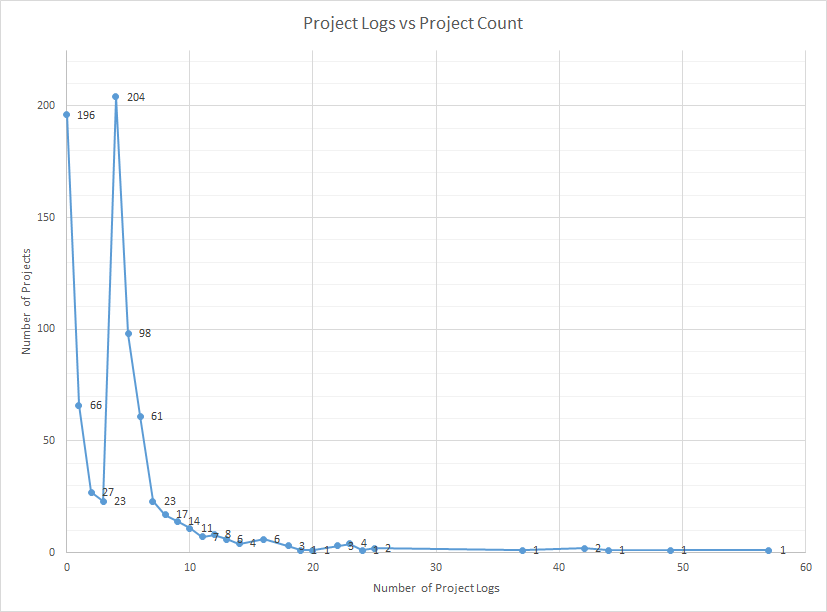 Thanks to user rawe, who provided this awesome chart tracking daily image uploads to hackaday.io over the past few months, along with significant dates! Since there are tags on projects, there can also be tag statistics!  (Excluding "thehackadayprize" here, as it was by far the most common tag).  Tag cloud from the list of valid entries.  You guys with completed projects are way ahead of the game. 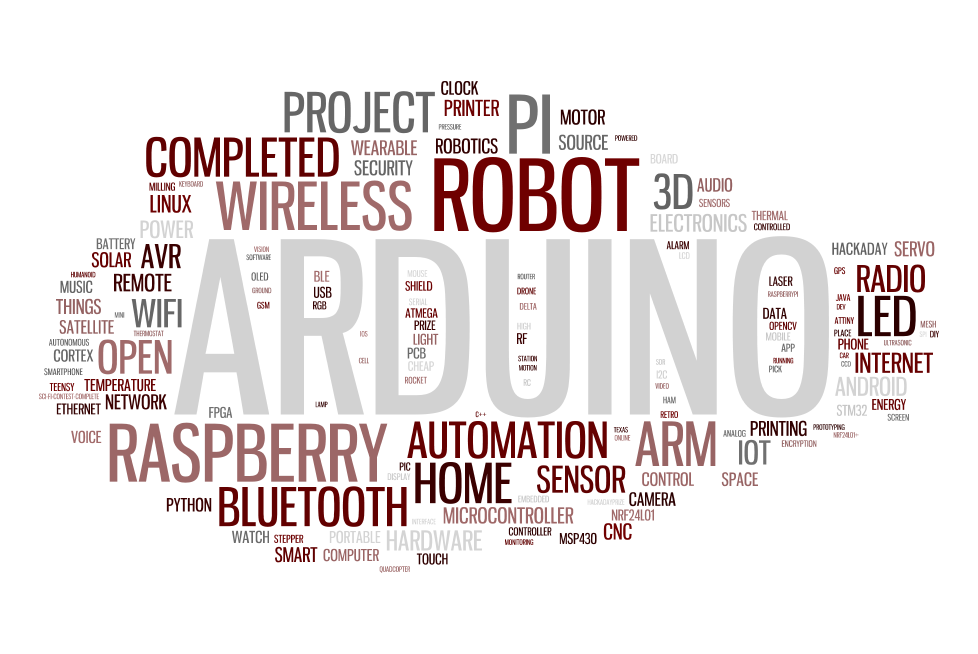 True to Hackaday spirit, only one person mentioned SAFETY.

Complete list of valid entries (note: excludes qualifier for "system diagram", so may be inflated). ...

I'd love to see keywords vs. number of project logs, project creation date, and probably a bunch of other variables.

Oh, here's another thing: if you were to do tags vs. quarterfinal / voter lottery selection, it would be two-tailed if you're trying to suss out any bias against a keyword, right?

Ed0 wrote 08/25/2014 at 23:13 • point
Here is a another view of the data - plotting skulls vs entry order and indicating semifinalists (and valid entries from your data)
http://hackaday.io/project/2866-Unofficial-Hackaday-prize-semifinalist-statistics
With code if anyone wants it, public domain

Benchoff wrote 08/26/2014 at 10:09 • point
@Blecky: 14 projects that made the quarterfinals were featured, 7 project creators that made it had a 'hacker bio', and ChipWhisperer had two posts, only because we ran into him at Defcon.

zakqwy wrote 08/25/2014 at 13:55 • point
Has time slowed to a stop for anyone else? The anticipation of today's announcement is too much to handle.

zakqwy wrote 08/25/2014 at 23:01 • point
Sad and relieved describes my afternoon well. I appreciate the vote of confidence, Dave. My project has a new tag: #ExternalMotivationDeemedUnnecessary

Don't stop just because you didn't make the cut, people! Finish the project because it's awesome, not because of some prize!

davedarko wrote 08/25/2014 at 23:25 • point
I think I go with #badmotivator, #hackanay or #astronot ... I still want to see the GimbalBot fly, and I'm pretty sure it will :) As for my projects, I have to focus on my work, all this refreshing and reading and procrastinating on them... I have to make them a weekend thing again.

PointyOintment wrote 08/26/2014 at 05:45 • point
Sad and relieved here too, though sad more for all of your projects than mine, because I knew I entered mine too late for them to have a good shot. I was actually surprised by a few that did make it because I didn't think they were very connected, but I guess the judges liked other things about them. (GimbalBot is far more connected than Goliath, IMHO, though Goliath is more physically awe-inspiring.)

On the other hand, we'll all be getting consolation prizes:
"UPDATE: I forgot to mention… those hundreds of other prizes that we’ve been mentioning all along will be awarded to all of the entries. If you officially submitted your project before the deadline you will be rewarded for being a Quarterfinalist. Watch for a post later in the week about exactly what and how we’ll be getting it to you. We just need to make sure we have the logistics sorted out before giving out the details. Thanks!"

That really made me laugh! Good catch!

connorwood71 wrote 08/23/2014 at 11:07 • point
For the number of hackers listed in these statistics, is it just the project maintainers who are considered, or are several people considered for one project, if they are listed as collaborators?

DigiGram wrote 08/23/2014 at 11:00 • point
All of the valid project lists here only lists the project ID. I like names too. Actually found a few cool projects by judging the name :D http://digigram.alwaysdata.net/completed.txt

zakqwy wrote 08/23/2014 at 00:11 • point
Ridiculous to see how many project logs some folks have up there. Totally unnecessary.

PointyOintment wrote 08/22/2014 at 05:57 • point
Here is the list of valid entries, sorted and made into a stem-and-leaf display (thanks, Mrs. Macleod!) with intervals of 100: http://hastebin.com/gosunafexa.md

I just used the Python interpreter to sort (after Wolfram|Alpha, as usual, failed to understand what I wanted) and separated the intervals and padded the short entries by hand.

Michael O'Brien wrote 08/22/2014 at 23:39 • point
Same list, though without leading 0's and in the same format listed in the details.
http://mobrienphotography.com/Project-List-%5bRe%5dOrdered.txt

Interesting. I went by the official rules, which state that the deadline was August 20th 23:50 PDT. I actually was going to enter my third project too, but when the deadline came I needed about 5 more minutes to post my log entries and details, so I gave up on that (temporarily; the project will still proceed, though not in a hurry). I did try opening the entry form after the deadline and it didn't complain, but I imagine it would have been disqualified if I had entered it then.

Blecky wrote 08/22/2014 at 00:03 • point
Now you just need a crowdsourcing page that get people to check profiles and "vote" if they meet the other criteria or not (and possibly for the next rounds).

For the moving project, the hacker name that disappeared from the last count was "hackaday.io". My best guess is that this is not a real hacker name, but just a temporary used name, maintained by HaD because of some technical reasons.

The moving project reappeared to an already registered hacker.
So now, there are 40 hackers with 2 projects each.

Thanks and Skull for the chart.
Very useful.

doug.leppard wrote 08/23/2014 at 02:02 • point
I had the same problem when the simpler 1 2 3 emails came out I forgot about the details and thus in my video I had Hackaday Prize not TheHackadayPrize.

Bummer partly my fault for following the 1 2 3 not the details.

It still has been a good journey

It's kind of obvious from this graph that the submission instructions for valid projects were not clear. I got duped by the 1-2-3.

Blecky wrote 08/21/2014 at 23:58 • point
It was definitely clearer than the original requirements. I think a lot of people complained early on so they defined it better. They even changed the deadline to be a few weeks later to compensate.
Easy mistake to make, but it always pays to read the details. Have fun at burning man at least!

RoGeorge wrote 08/21/2014 at 19:55 • point
Just counted the projects/hackers again about a half an hour ago.
One project changed its owner, and one hacker disappeared.

davedarko wrote 08/21/2014 at 19:40 • point
what about published on weekday xy? I noticed that the weekends weren't that busy but tuesdays and thursdays.

davedarko wrote 08/21/2014 at 21:37 • point
I also wonder how many projects have this kind of picture: background-image:url(/img/placeholder.png)

RoGeorge wrote 08/21/2014 at 19:05 • point
I promised a few comment ago to post my results. The input data is from the Web page named "Official Hackaday Prize Entries", http://hackaday.io/submissions/prize/list

At the moment when the input data was sampled,
- there were 718 hackers with a total of 791 projects


Thanks for quoting!
:o)

PointyOintment wrote 08/21/2014 at 17:48 • point
What I'd really like to see is a graph of submission frequency over time for both projects entered and projects not entered into the contest. I noticed something like 40 projects posted in the hour before the deadline (about 2/3 entered), and only one in the hour after the deadline. Projects do have creation dates on the left side, but creation times aren't publicly available, so I hope they include that if they do release official statistics.

PointyOintment wrote 08/22/2014 at 05:32 • point
Thanks! That's a huge spike at the end there. I'm not surprised to see that the last day has a relatively low proportion of valid entries; I noticed a lot last night that were just stubs. Though it's a bit hard to see which point corresponds with which date; could you post a version with vertical gridlines, or just the last half with a wider x-scale? (The raw data would work too, I guess.)

I had an idea for getting the creation times, but it didn't work. I thought they appeared in the feed, so you could just subscribe to every entry and scrape the feed, but the feed only shows relative dates. :/

I suggest you make your next project a time machine ;)

RoGeorge wrote 08/21/2014 at 17:52 • point
Seems like you missed the instructions for how to apply for TheHackadayPrize.

davedarko wrote 08/21/2014 at 20:27 • point
http://hackaday.io/project/37-Feedback---Hackaday-Projects It's a good place to drop questions, bugs and features. You can find the link in the drop down menu where your projects and profile is linked. On http://hackaday.io/prize there where details listed and the rules specified that.

As this is "image uploads per day", it should correlate with overall "content creation per day".

rawe wrote 08/22/2014 at 12:12 • point
1. get directory listing from image server as xml with bucket API
2. xml-kung-fu to get just the "last modified" attribute as text file
3. python datetime to timestamps, numpy histogram with (timestamp[last]-timestamp[first])/60*60*24 bins
4. convert bin names back to datetime, then to string, export as csv
5. create open office chart / notes added

I think there are quite a few on hackaday.io and I'd like to find out what you're making
Project Owner Contributor