Development of a simple theft prevention security system for a 2005 KTM 950 Adventure motorcycle.

The device works by disabling the motorcycle's fuel pump. After the bike's ignition has been switched on, a magnet must be waved over a hidden reed switch to activate a latching relay. This latched relay will permit the ECU to power the fuel pump, until the ignition is turned off or a button on the handlebar is pressed that silently resets the circuit. An LED indicates the status.

This was built for a 2005 KTM 950 Adventure motorcycle, so all circuit and ECU behavior is specific to this motorcycle. As such, the design may need to be modified to suit your needs. Note that an aftermarket Facet 40171 solid state aircraft fuel pump is being used for its ability to restrict flow when deenergized. This is not possible with the stock fuel pump, and if the fuel level in the tanks is above the carburetor bowls, fuel will continue to feed them.

For releasing the relay, a normally-closed button (dirt bike kill switch) was mounted on the handlebar for emergency use. This could be used in a motorcycle-jacking situation. Instead of turning off the engine, which could be dangerous (depending on the situation), the system silently turns the fuel pump off, leaving enough fuel in the carburetor bowls to drive ~1/8 mile. At that point the bike will stall and won't start until the fuel pump is energized by waving the magnet over the reed switch again. Even if the circuit is known, the placement of the reed switch would not be apparent until body panels are taken off. The magnet can even be sewn into the sleeve of a jacket, so the hand placement over the reed switch or timing of its activation doesn't necessarily expose the location of the switch. The switch can also be reactivated while driving, since the fuel in the carburetor bowls will be sufficient for a short distance. This can be crucial if you can predict a jacking, even if by a few seconds. If the reset button is pressed only to find it was unneeded, just a wave of the sleeve is needed to restore power to the fuel pump.

The circuit itself would be easy to bypass if the side panels come off, which takes just a minute or so. This isn't something a thief is likely to do unless they are very experienced or there was prior knowledge of the device. Even in that case, knowing the right wires to cross after that would also require crucial knowledge of the design. 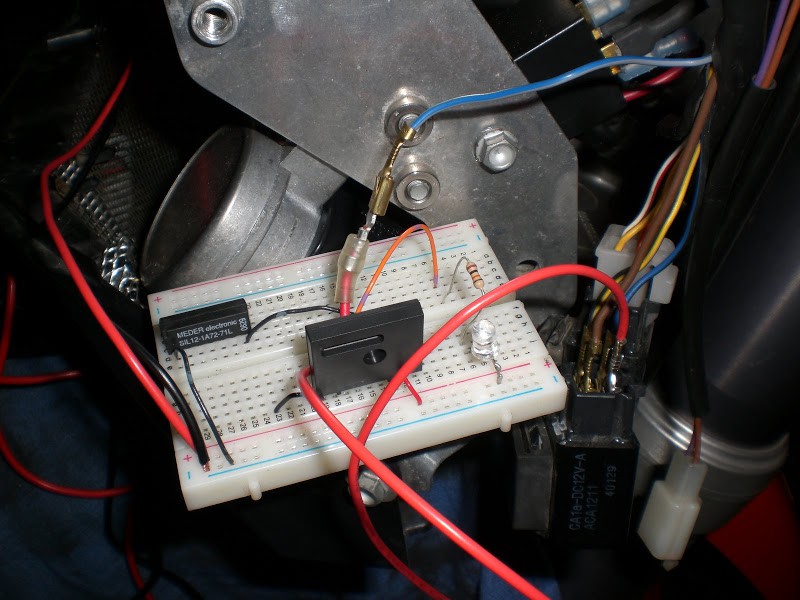 The first prototype failed to operate as expected. After the key turn powers the bike, the ECU energizes the fuel pump for 3 seconds, then remains off until the engine has started and is running. The momentary power loss from the ECU, between pre-start priming and when the engine and fuel pump are running, caused the solid state relay to reset. This was fixed by adding a second relay to be latched by the first, instead of using the ignition power to latch the single relay. If one relay was used, the ignition power used to latch the relay would travel into the ECU, which I want to avoid for obvious reasons.

Prototype v2 (Note, the battery is missing from the drawn schematic) 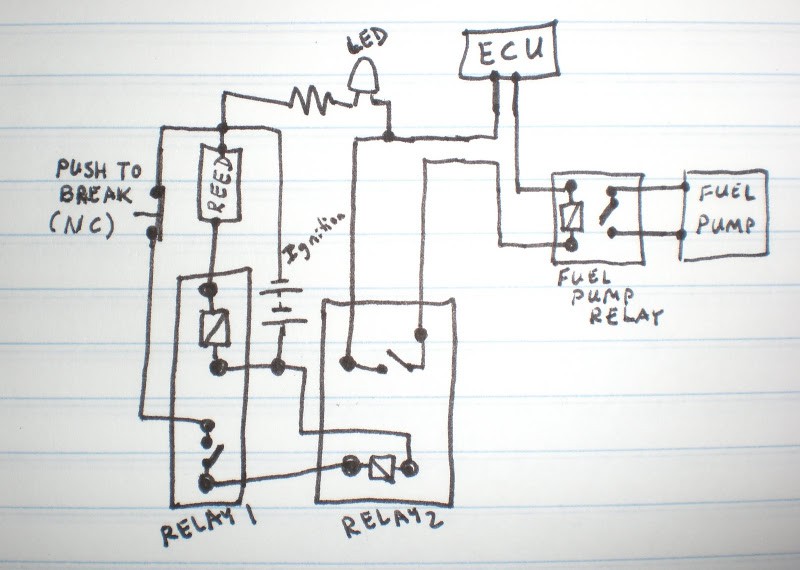 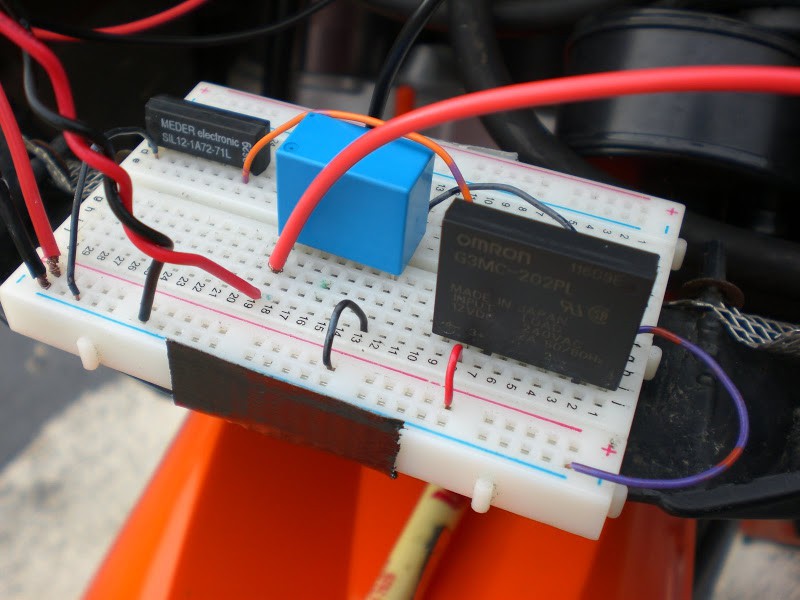 The v2 live test worked flawlessly and has been sealed and mounted. For my own security, I won't include pictures of where and how it's mounted, but it should be noted that to prevent corrosion, all wires were soldered, covered with heat-shrink tubing, and the case sealed with silicone or epoxy to weatherproof. Two test drives lasted 0.25 miles and 0.4 miles until the engine stalled and would not start. The shorter distance was caused by 10 seconds at a red light. The 0.4 mi. test was in an uninhibited, straight drive. Also keep in mind that this was from a hot-start, without the need for the engine to warm up. Many cold starts require at least 10 seconds until the bike is drivable. I'm very satisfied by the results. 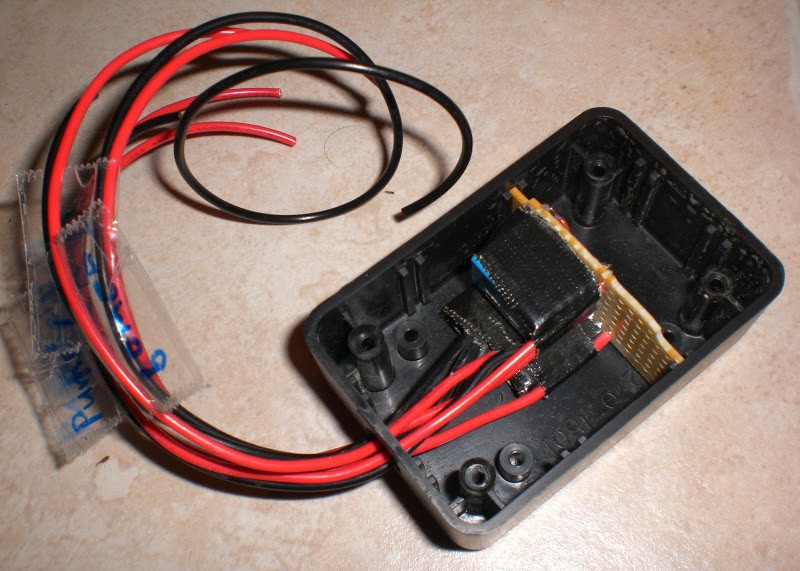 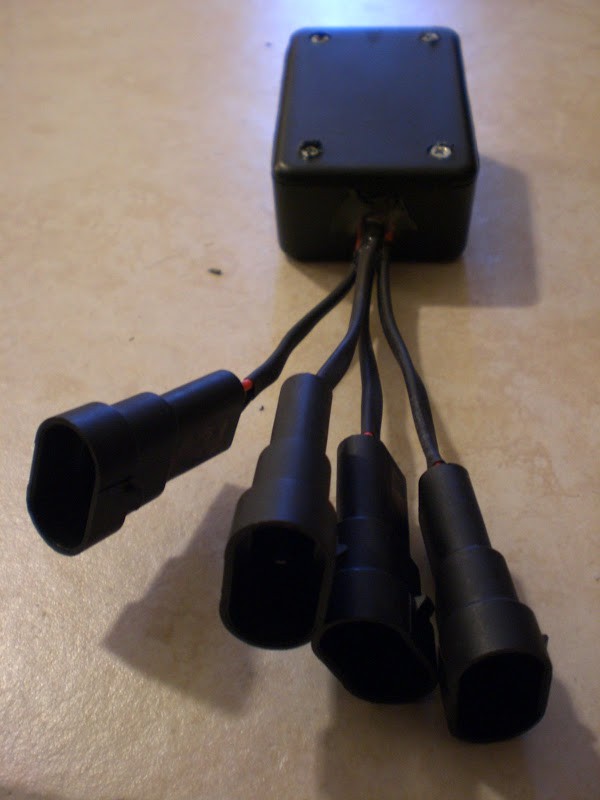 No single security device will prevent theft, but used in combination, they will increase the probability of thwarting a thief's attempts. This circuit design is mainly aimed at theft after other security devices have been removed, as in about to get on, or while riding. This is a high-risk time for theft because the bike's securities have [supposedly] been disabled. If no other way to lessen the danger presents itself, let the bike drive away and recover it shortly after.

Update: After a collision that left my KTM 950 undrivable, I'd like to report that the nearly 5 years of use, through Mexico, Central America, and the US, there were no problems with the circuit operating. After the accident, while stripping the bike of parts, the case of the security system was opened to reveal a circuit looking as it did the day it was sealed.

I may be altering the design and form factor in the near future, to work with my new 2012 KTM 690 Enduro's fuel injection system.

Sick of having 2 speeds for my windscreen wipers. Nothing a 555 timer can't fix!
Project Owner Contributor

Forgot to close your garage door? Don't worry about it.
Project Owner Contributor

The 2016 Hackaday Prize
An easy, cheap and open source way to add IoT to a light switch.
Project Owner Contributor

power window relay (M91) delay off for Nissan Patrol ST 2016 to give grace period to power up windows after ignition is off.
Project Owner Contributor