Tried installing the crystal on top, but realized it would be so fragile, it would require just as much padding as when it's mounted on the bottom. Meanwhile, I2S had the same problem it did 5 years ago with the Yamaha hack. It's not aligning on the word boundaries, yet disabling the word select pin causes it to stop.

The solution for the Yamaha was bit banging the data. Since the AK4524 spits out data twice as fast, that's not an option. No-one else ever used the I2S as a slave. 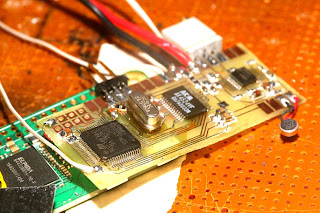 As was probably noted 5 years ago, the I2S doesn't work because it overflows when started after the ADC is already running.  When starting the I2S first, it works perfectly, with very rare failures.  This wasn't possible 5 years ago because the Yamaha always started before the I2S.  It would have taken a MOSFET to keep the Yamaha powered down until the I2S was started.


The next problem was the DACs weren't powerful enough to drive 36ohm headphones.  An attempt to use the op-amp failed because of feedback into the microphone amplifier.  It was the delay from digitization to synthesis.  Passing the op-amp stages directly to the headphones worked. 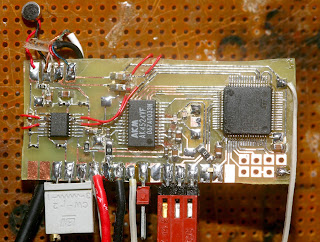 Another attempt used the old Zoom to amplify the DACs.  The DACs had to be divided by 10 to reach zoom level.  This worked & revealed the 12 bit DACs had horrible quantization noise for monitoring.  The next step would be PWM.  The GPIOs in digital mode might also have enough power to drive the headphones.  At least, it was impressive that it was successfully sampling 96khz 24 bits & playing it back without any glitches. 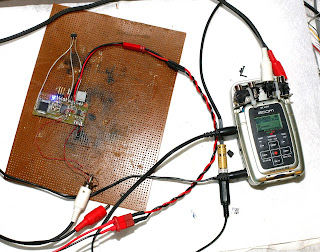 The defect riddled 1st board