This experiment was started on 2nd January 2018. It is the same as the second experiment (started 8th December 2017), but with only 12ml of water added to the bottle rather than 36ml. I also tried not to powder the soil too finely when I added it to the bottle.

I hope that because the soil is drier initially, CO2 will be released more slowly from the soil into the air, and the seedlings will last longer.

The progress of this attempt will be added as updates to this log entry. 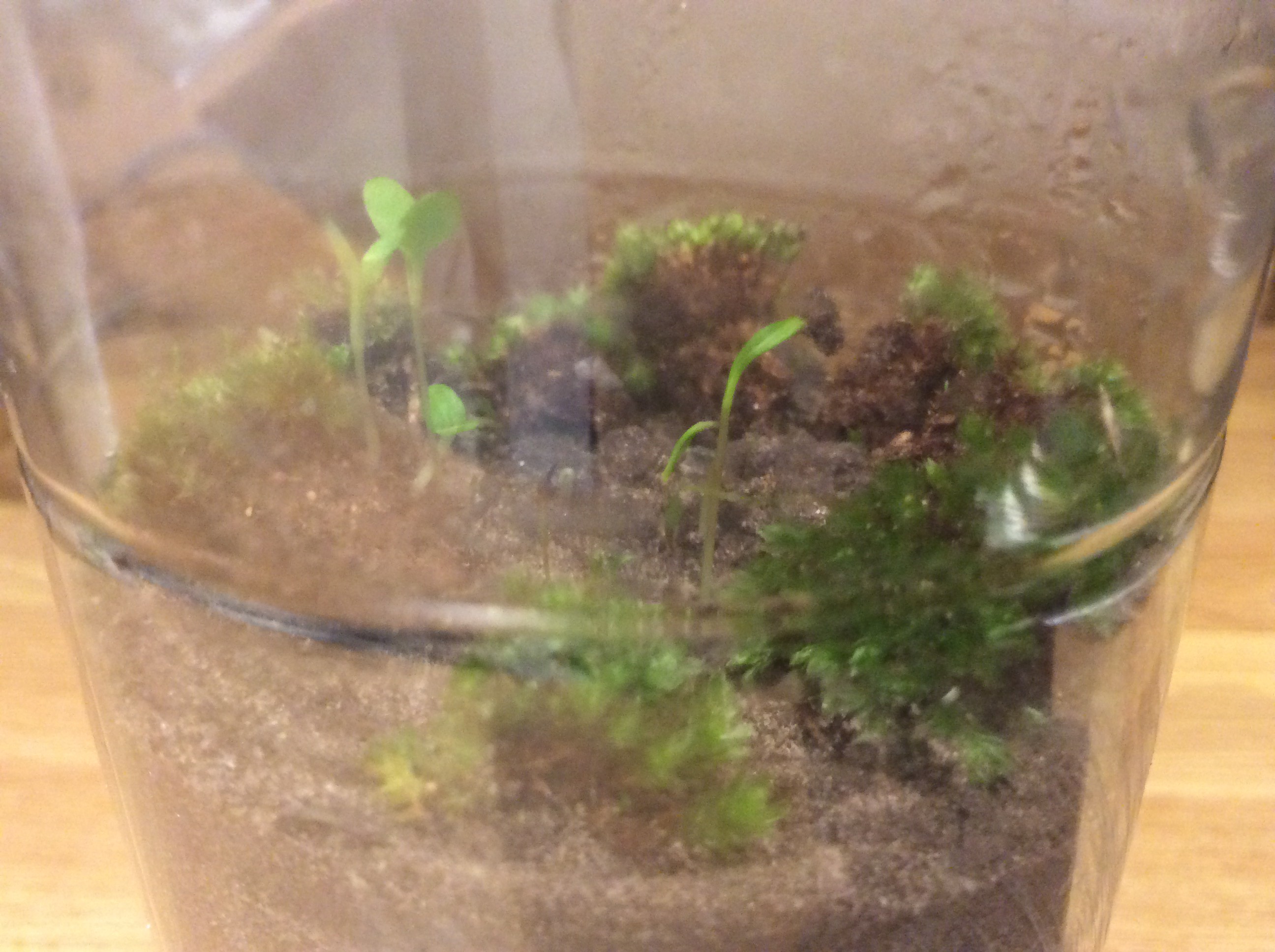 One of the carrot seedlings died off. Furry growth developed around its leaves, and it collapsed. The larger of the seedlings is still doing well, and a third has sprouted and is unfurling itself (behind the weeds in the photo below). The weed seedlings are thriving, one of them has the beginnings of a second pair of leaves.

I’ve noticed in this and previous experiments that the carrot seed coat clings onto the first pair of leaves of the seedlings.

This experiment has now been running for 26 days and the largest carrot seedling still looks healthy. It has exceeded the time by which the seedlings in the 'Second Attempt' experiment had collapsed.

The number of molecules of gas in the bottle has decreased. The bottle is permanently indented because of the reduction of pressure inside:

Could this be because some of the nitrogen in the bottle has been fixed by soil microbes?

The carrot seedlings remains alive, but doen’t seem to be growing very much. The taller seedling still has the seed case stuck to the leaves, holding them together and preventing them from opening out. One of the carrot seedlings hasn’t straightened up, I wonder whether this is because it also has it’s leaves stuck to the seed case, which might be stuck to something in the soil. The weeds are looking fine, and the third leaf on each has grown to about half the length of the larger leaves.

I’m still puzzling over the loss of gas volume inside this bottle described above. I measured the loss of volume by immersing the bottle in a jug and comparing the displacement with a bottle full of air. The difference was about 50cc. So 50cc of gas has either escaped from the bottle, or been used up in some biological or chemical or surface process.

I read that gases diffuse through PET slowly over time, so if the partial pressure of a gas is larger inside the bottle than outside, then that gas could leak out, leading to a decrease in the number of molecules of that gas inside the bottle. I guess that H2 would leak quite quickly, so if nitrogen fixation is taking place, and if this is producing H2, then that could be an explanation. But has there been enough nitrogen fixation to produce 50cc of H2?

I’m fairly sure that the partial pressure of CO2 in the bottle is higher than the outside, so that will slowly diffuse out. But should it really happen that quickly? Even if all the O2 in the bottle were replaced with CO2 (which I don’t believe is the case), then the partial pressure difference of CO2 between inside and outside would be about 0.2 bar. And wouldn’t O2 leak in at the same time that CO2 leaked out? Or does CO2 diffuse more quickly through PET than O2?

It should be possible to test questions about approximate expected rates of diffusion of H2 and CO2 through PET with separate experiments beginning with bottles filled with these gases and nothing else.

This project is generating a lot of new questions that I didn’t have at the outset, so it’s becoming more interesting as it progresses!

Having read a bit more about it, I’m fairly sure that the reason that the bottle has lost some of its air molecules is that CO2 has escaped through the PET bottle. I had wondered whether the loss might have been due to nitrogen fixation and subsequent loss of hydrogen, but I don’t believe that nitrogen fixation inside the bottle is happening at a fast enough rate for this to be the cause.

I measured a loss of 50cc, and since the bottle had about 300cc of air in it initially, of which about 60cc was O2, this means that most of the O2 has been used up and replaced with CO2 during soil respiration, then leaked out of the bottle.

It occurred to me that a material that allows CO2 to pass through more readily than O2 could be used to extract CO2 from the Martian atmosphere into a greenhouse without using a pump. CO2 makes up about 96% of the atmosphere of Mars, at a partial pressure of about 6 mbar (and probably upto 12 mbar in the lowest lying parts of Mars). Plants grow on Earth with a CO2 partial pressure of 0.4 mbar. A greenhouse with walls made from a semipermeable barrier like PET (but capable of withstanding the higher radiation levels found on Mars - see note below) would draw in CO2 from the atmosphere as plants use it up during photosynthesis. The pressure in the greenhouse would increase because the O2 that the plants produce would leak out more slowly than the CO2 leaked in. The maximum pressure that it would reach would depend on the ratio of the rate at which O2 and CO2 permeate the barrier material. If O2 passes through the barrier 10 times more slowly than CO2, then such a self-pressurising greenhouse could reach 120 mbar in the lowest lying area of Mars.

This probably isn’t a new idea, so if anybody knows of anything already written about this please add a link in a comment. Also, if you think it won’t work, please add a comment.

Note that the transparent part of the greenhouse could be made from a more robust material such as glass, and the semipermeable barrier could be in an underground tunnel to protect it from radiation present on the surface.