If and when I manage to grow carrots in a sealed bottle, I want to be able to do it largely independently of the external conditions. So I’ll need to control the temperature of the plant’s environment and the amount of light it receives.

I’ve set up a carrot seedling in a pot with three LEDs illuminating it. I used two red LEDs and one blue, having read that this proportion is supposed to be okay for plant growth.

I’m not sure exactly how much light energy the LEDs are emitting, but I estimate that the illuminated area around where the plant is growing is receiving no more than 25 W/m2. Will that be enough? Even though it looks bright in contrast with the room lighting, I think that it’s only about the same intensity as an overcast day.

The carrot seedling is now showing its first true leaf between the two seed leaves, as seen in the photo below.

I’ve been thinking about how to make more efficient use of the light that shines on a seedling. When the plant is small, most of the light from the LEDs is wasted, only a small fraction lands on the seedling. With an array of smaller LEDs, each directed to a small area of soil, it will be possible to illuminate an area closely matching the shape of the plant. It would be possible to adapt the shape of the illuminated area to the plant by using a camera to monitor the plant. But this seems overly complicated. Plants are already capable of adapting themselves to their circumstances, so instead of having a complex system of monitoring with a camera, I plan to have a fixed sequence of illumination patterns. Over the course of 2 or 3 months the pattern of illumination will grow in size - a few more LEDs will be turned on every few days - at a rate matched to the expected growth rate of the plant. Hopefully the plant will adapt itself to fit into the illuminated area.

The seedling has developed three true leaves now - two large ones that have been present for weeks, and one smaller one which appeared a few days ago. The stems are very elongated where the leaves grow upwards until they are almost touching the LEDs, so it seems as though they would prefer to have more light than this. 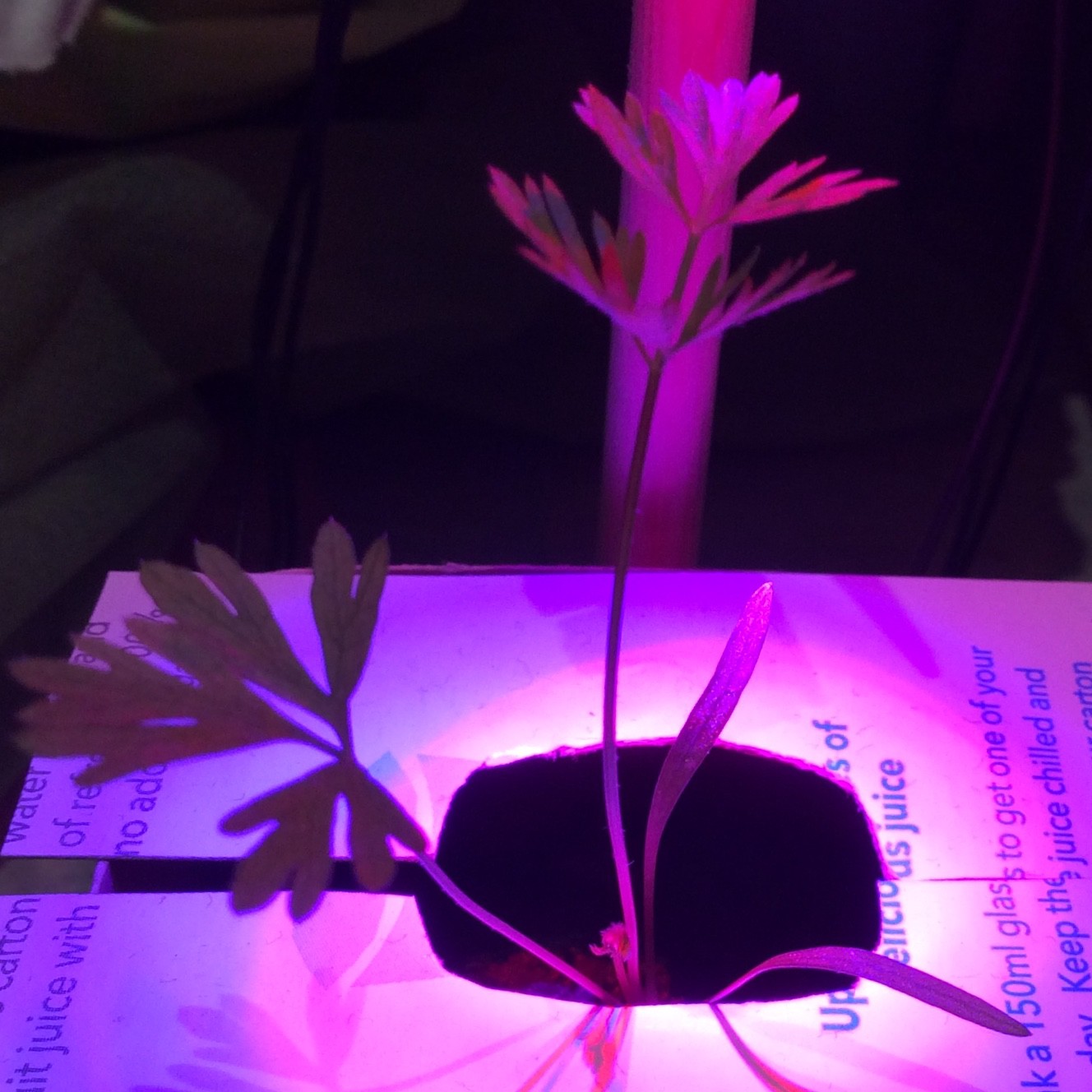 The third true leaf is already nearly as large as the other two. In the photo below you can see how two of the leaves have stretched right up to where the LEDs are to get as much light as possible. A fourth small true leaf has appeared, first noticed today. The main stem of the carrot, below where the leaves split off, is very thin and could not support the plant - the plant is held in place partly by the leaf in contact with the cardboard.